Today a  MODERATE  avalanche danger exists at and above Treeline where cornices should be avoided and lingering wind slabs are possible in steep terrain.  At Treeline, glide crack movement has been active including several that have avalanched to the ground over the last few days. These unpredictable hazards can release unexpectedly and should be avoided. Today’s avalanche concerns require you to be aware of what is above and below you and avoid specific high consequence hazards.

Below Treeline the danger is  LOW  where triggering an avalanche is unlikely.

Yesterday buried surface hoar was found in Lynx creek where a shallower snowpack exists. Similar to Summit Lake, more caution and careful snowpack evaluation is essential on the Southern side of our forecast zone. See the most recent  Summit Lake Summary  for  snowpack observations.

Filing for the PFD this week? Remember, The Friends of the CNFAIC is part of  PICK.CLICK.GIVE. Your donations are greatly appreciated and an integral part to making the CNFAIC possible and sustainable.

Yesterday’s poor visibility made it challenging to see this unpredictable hazard. We received a report of a glide release on Seattle Ridge yesterday, but the exact location is unknown at this point. Glide cracks are appearing all over Turnagain Pass between 1000’ to 2500’ and are showing up in popular areas. Monitoring their movement is helpful, but there is no discernable pattern to predict a failure as they tend to fail naturally and on their own schedule. Warm temperatures can trigger them and so can cooling temperatures. Cracks can form and release in seconds or days later or sometimes a glide crack won’t release at all, and benignly just fill back in with snow.

Glide cracks are best to be given a wide berth.  Limit your exposure time spent underneath and if skiing or riding in terrain with glide cracks, try and map them out before your travels so as not to end up directly on top of or inside one.  Remember, when these do fail, they tend to be destructive, failing to the ground bringing the entirety of the snowpack with them.

Along Seattle Ridge glide cracks are becoming more abundant in specific locations. Avoidance of these unpredictable harzards is key. Thanks for the photo and observation Travis! 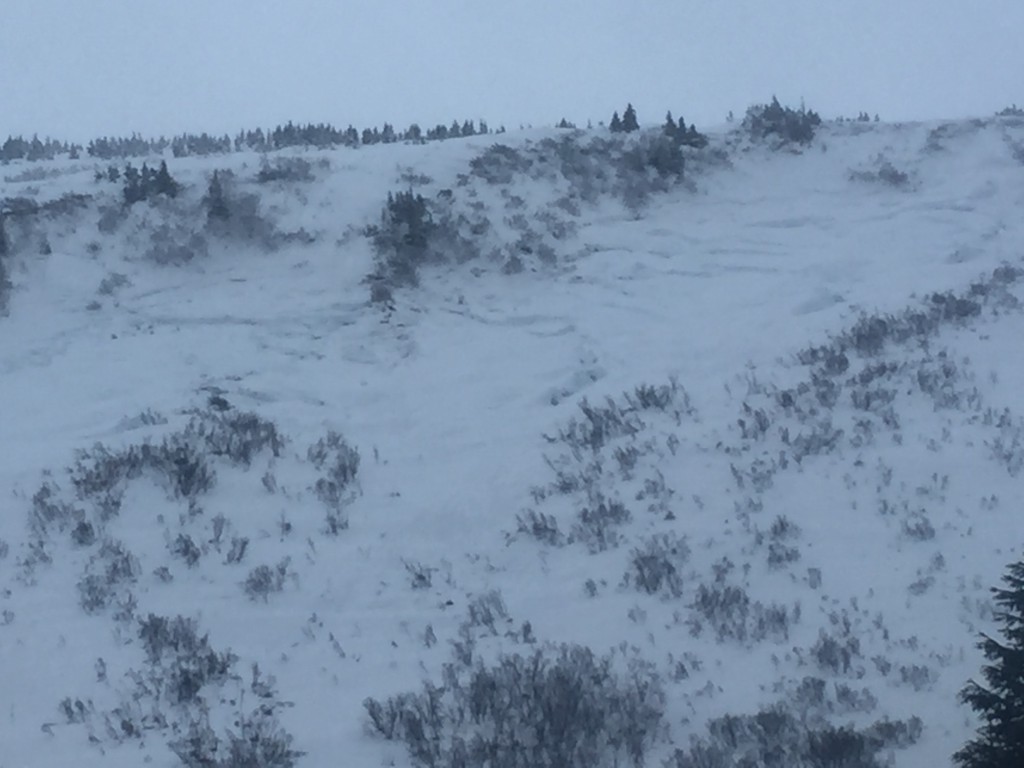 Cornices have grown considerably during the past few weeks. Not only do they have the potential to fall naturally, but also to be triggered by the weight of a person or snowmachine. They can also trigger an avalanche on the slope below when they fall. Travel under or on them should be avoided. Today’s weather forecast should make travel into the Alpine easier with good visiblity, thus don’t forget cornices have the tendency to break farther back from the ridge than expected.

As we move further away from our most recent storm event that ended on Jan.11 wind slabs are becoming a low likelihood concern. However triggering a lingering wind slab could have high consequences in places with cliffs, rocks, or trees below. Obvious signs like shooting cracks may not be present until its too late, as wind slabs are known for breaking above you, once you are well onto a slab. Ease into steep terrain and avoid terrain features with high consequences.

*Yesterday we received a report of buried surface hoar found in a snow pit in Lynx Creek.  This weak layer is more suspect in protected areas of the snowpack, but could be more widespread in this region. Similar to Summit Lake areas, Johnson Pass and Lynx Creek have a shallower snowpack where conservative terrain choices should be utilized.

Yesterday light snow fell in Girdwood and Turnagain Pass leaving trees with over an inch of white stuff. Valley fog was also observed. Winds were clam from the East and temperatures remained just below freezing, <30F.

Today skies are expected to be mostly sunny becoming partly cloudy by mid afternoon. Patches of Valley fog could obscure visibility at lower elevations with a chance of light snow in the afternoon.  Temperatures will be in the mid 20F’s today. Expect light ridgetop winds from the East.

*Wind data from Sunburst Weather Station is from 2pm to 6am, due to a rimed anemometer  that is now fixed.