A MODERATE avalanche danger exists in the backcountry surrounding the Turnagain Pass region. Today is the second day after a 15-25+ inch storm and although signs are pointing to a stabilizing snowpack, we are still within the window for possible human triggered slab avalanches. These are most likely to be found on windloaded slopes at, or above, treeline (see below for a slab triggered yesterday). Slabs may vary in thickness from 1-3+ feet and could break above you. Always watch your partners closely and expose only one person at a time in avalanche terrain.

*There is little information about the periphery zones such as the upper elevations of Girdwood Valley, Portage Valley and Summit Lake on the Kenai. Danger in these areas could be higher than Turnagain Pass itself.

Thanks to all those who participated in our first Avalanche Rescue Workshop at Turnagain Pass yesterday! The next Rescue Workshop will be on January 9th so mark your calendars. 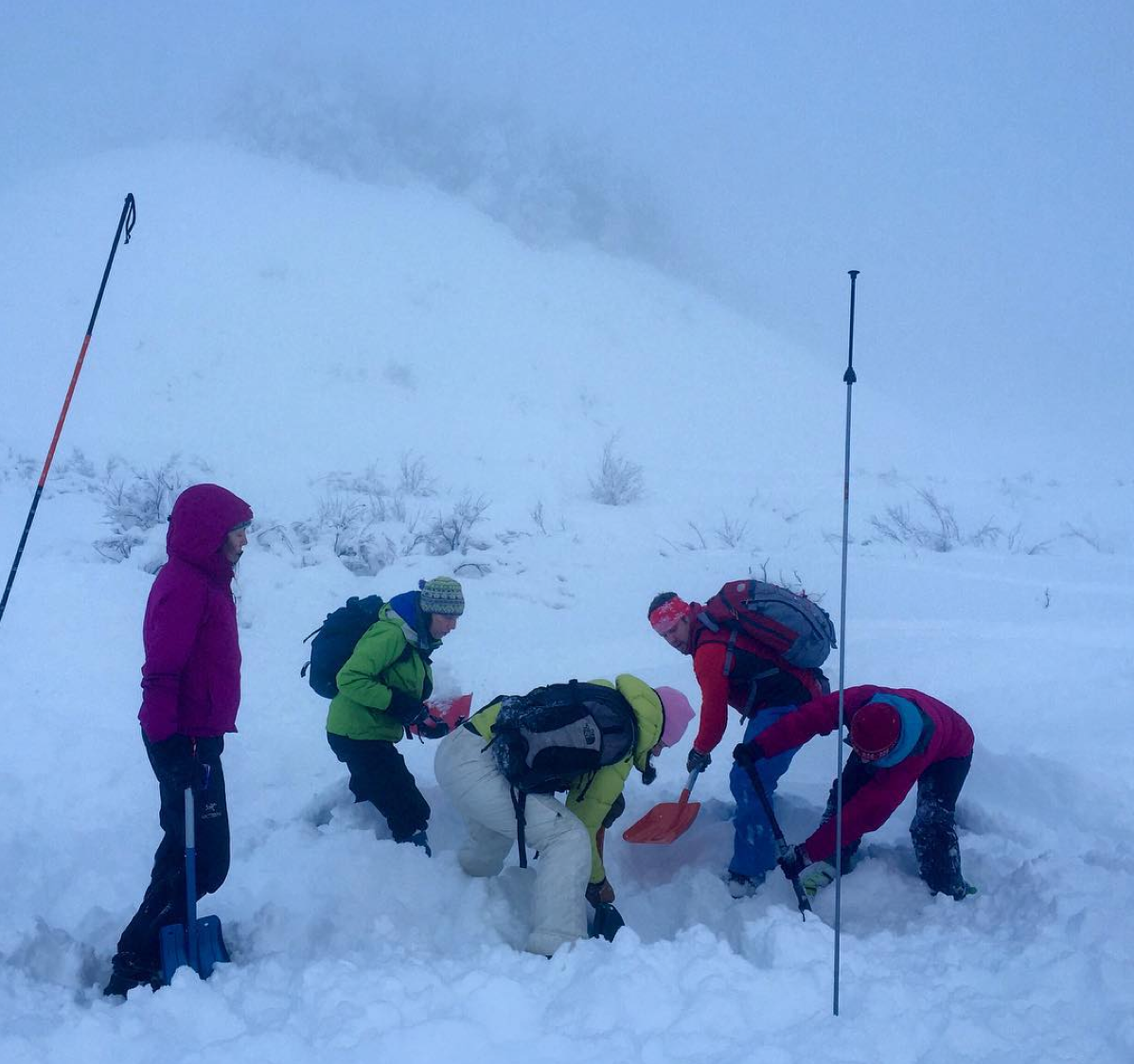 Yesterday was the first clear day after a quick hitting storm dropped over 2′ of snow on the North side of Turnagain Pass, lesser amounts were seen in Girdwood Valley and the South side of the Pass. Many folks were out enjoying the new snow and easing onto steeper slopes and into avalanche terrain. Despite the number of people out and about, we only had a report of one human triggered slab avalanche. This slide was triggered by a snowmachiner on the front side of Seattle Ridge (Easterly aspect ~2,200′, photos below). This slope is not especially steep, but it is on the North side of the Pass and in an area that typically sees larger snowfall amounts. More on the report HERE. Check out additional reports sent into us from Eddies, Tincan and Sunburst HERE.

If you are headed out today, remember we are still close enough to the storm that lingering wind slabs may remain sensitive to human triggers. Watch for areas with stiffer snow over softer snow and hollow feeling snow. Also look for patterns of wind loading on leeward and cross loaded slopes (35 degrees and steeper).

*Don’t forget your safe travel practices, especially considering there are very few ‘obvious signs of instability’ currently. As a reminder these signs are: recent avalanches, shooting cracks, whumphing and rapid changes in weather. Safe travel practices include: Watching your partners, having an escape route planned, grouping up in safe zones and carrying (and knowing how to use) your rescue gear in the event a person is buried.

The cooler temperatures are helping stabilize the slab avalanche potential by loosening the snow surface, but this will also contribute to larger loose snow avalanches (sluffs). Hence, keep an eye on your sluff. 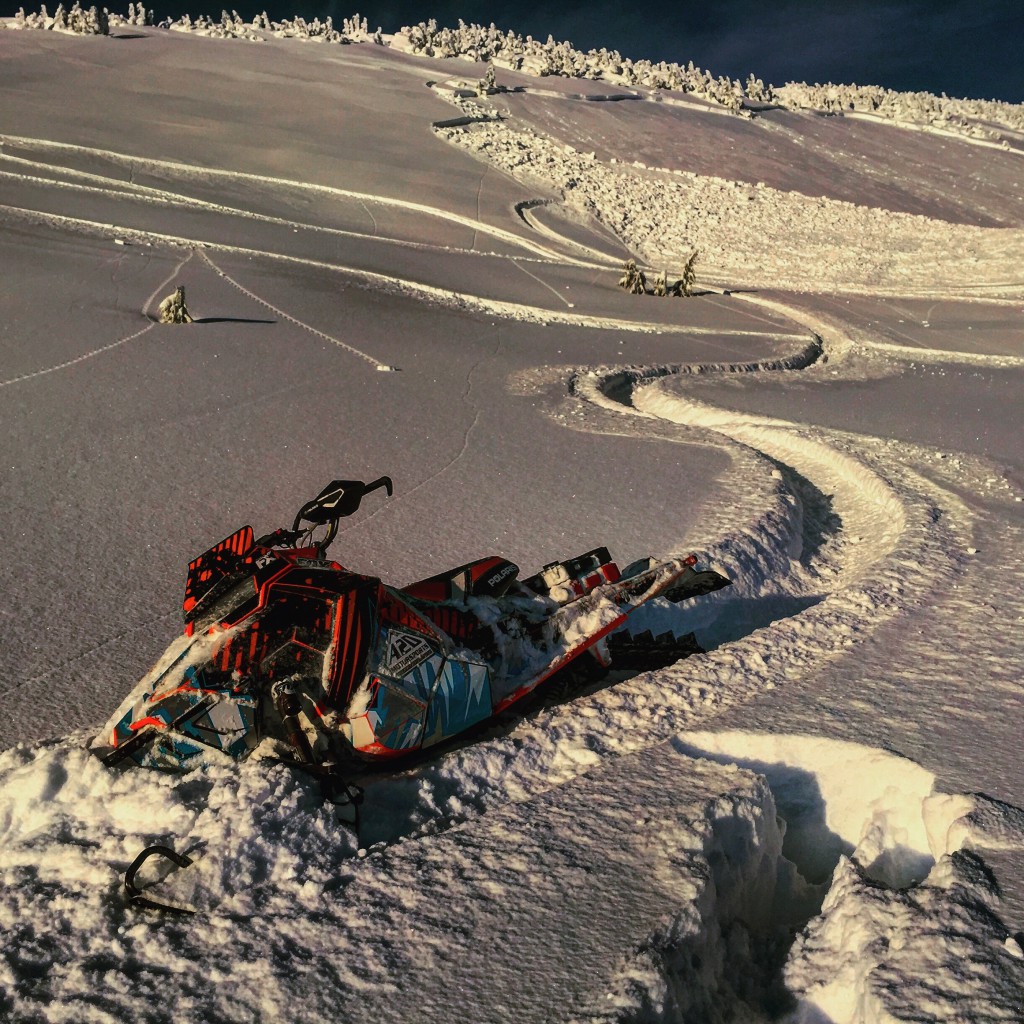 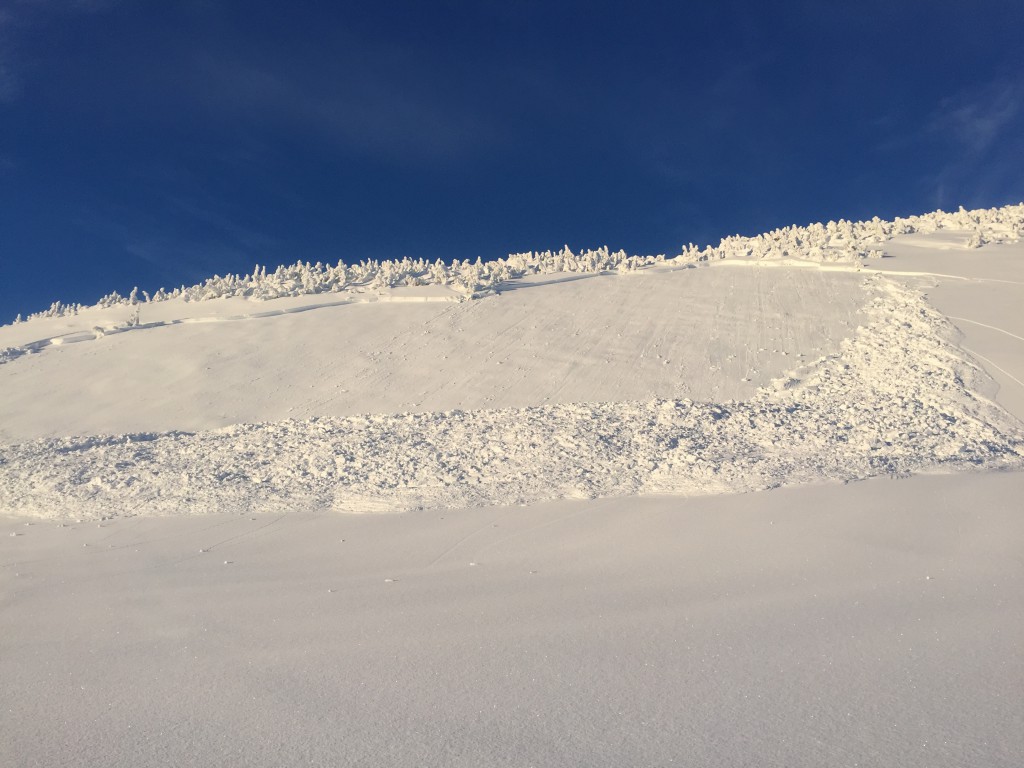 Photos above are of a snowmachine triggered slab avalanche triggered yesterday. Rider was able to throttle out. (Thanks to Chad Winberg for sending in these photos).

Cornices have grown a fair bit from Saturday’s storm. As we enter a several day stretch of mostly clear weather and folks are traveling further into the backcountry, don’t forget to give these features a wide berth!

The photo below illustrates the cornice that forms at the head of Zero Bowl (Mama’s Bowl) on the backside of Seattle Ridge. This cornice, like many others, can grow larger than many greyhound buses lined up end to end. Notice the snowmachine tracks traveling along the ridge just shy of the cornice. It can often be hard to determine how far a cornice extends when approaching from the wind ward side. 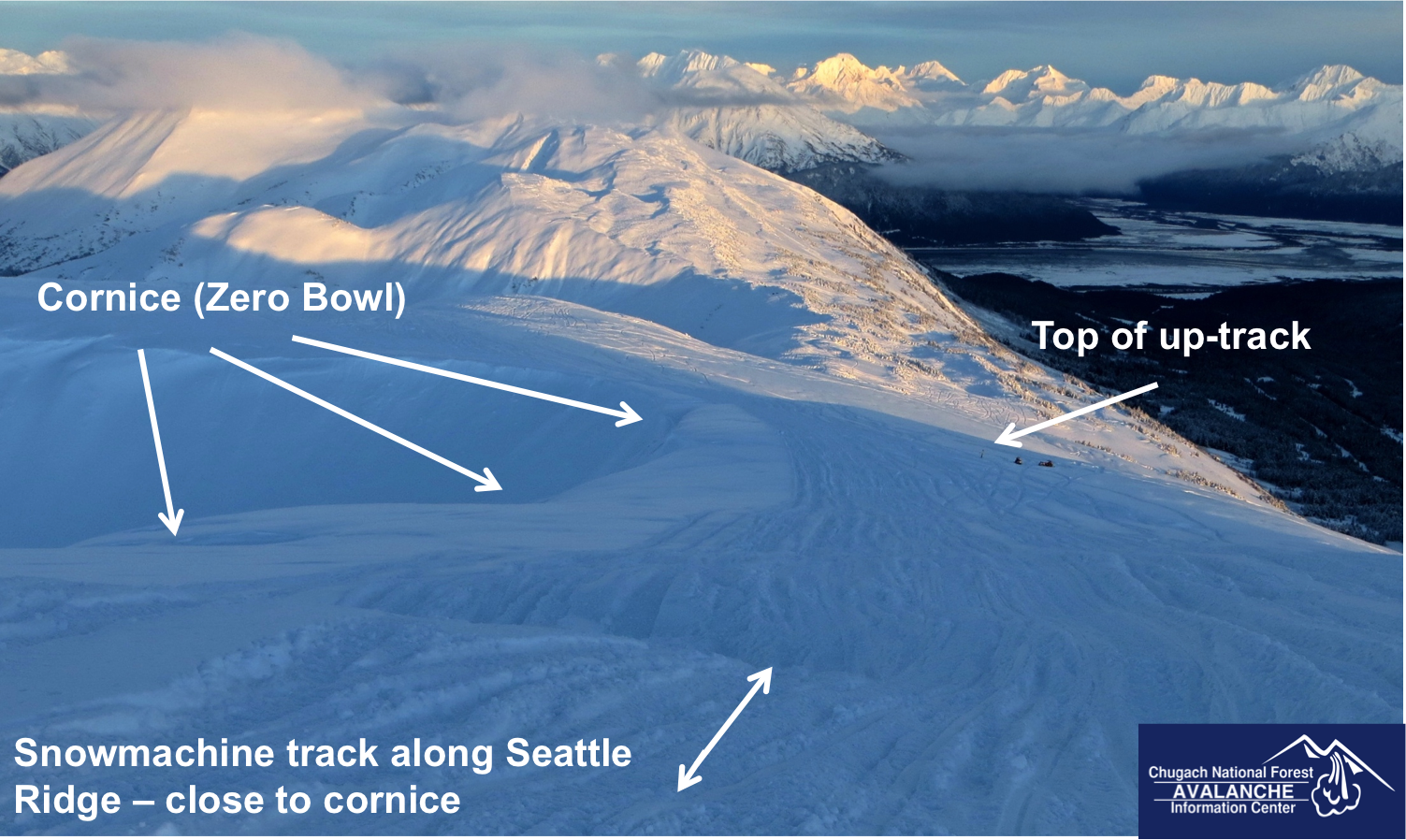 Mostly sunny skies with valley fog covered the region yesterday. Winds have been light from a generally Westerly direction for the past 24-hours and temperatures continue to decrease  under the clear skies.

Today, we should have mostly clear skies as we are sitting between storm systems. Cooler air continues to stream in from the West and there is a slight inversion this morning; temperatures are in the 5-10F range at the road elevation and ~15F on the ridgetops. Winds are expected to remain light and variable today.

For tomorrow, Tuesday, mostly clear skies are on tap with winds turning to the West. The winds should stay light but may pick up to the 10-15mph range. It looks as though we are in this cold and clear spell to around Christmas day.