Today a CONSIDERABLE avalanche danger exists in the Alpine and at Treeline.  Triggering a slab 2-3′ thick will be likely in steep terrain as additional loading will be adding stress to the snowpack.  If venturing into the mountains cautious route-finding and conservative decision-making are essential.

*On the Southern end of Turnagain Pass and near Summit Lake, slab depths are shallower, but triggering a slab 1-2′ thick is likely in avalanche terrain.

Below Treeline a MODERATE avalanche danger exists where an avalanche from above in steep channeled terrain is unlikely, but possible.

This morning snow showers combined with moderate winds are expected to bring another 5-7” of new snow to an already precarious snowpack. Yesterday 20″ of unconsolidated new snow was observed above 2000′ on Tincan Mountain. Unfortunately the additional snow today might not be enough to tip the balance naturally. However triggering a slab up to 3’ thick should be at the forefront of our minds as Easterly winds, 20-30mph will be transporting snow and creating more of a cohesive slab.

This set up will likely be more dangerous in the Alpine of Girdwood and the Northern side of Turnagain Pass where snow totals yesterday were much deeper. This does not mean triggering an avalanche in a shallower snowpack will be any less likely.Yesterday a D-2, natural slab avalanche was reported in Summit Lake on Butch Mountain and poor structure exists in all areas of our forecast zone. Pay attention for wind loading, shooting cracks, and “wumpfing” if you decide to go into the mountains. Avoiding avalanche terrain is recommended as more snow is expected to fall through out the weekend. Give this snowpack time to adjust and avoid slopes angles over 35°.

Its always important to watch for deteriorating conditions. Should snowfall become intense or winds become stronger than forecasted, avalanche danger could increase beyond a CONSIDERABLE danger rating.

Yesterday Tincan recieved an unexpected 20″ of new snow compared to smaller amounts on the Sourthern end of Turnagain Pass. 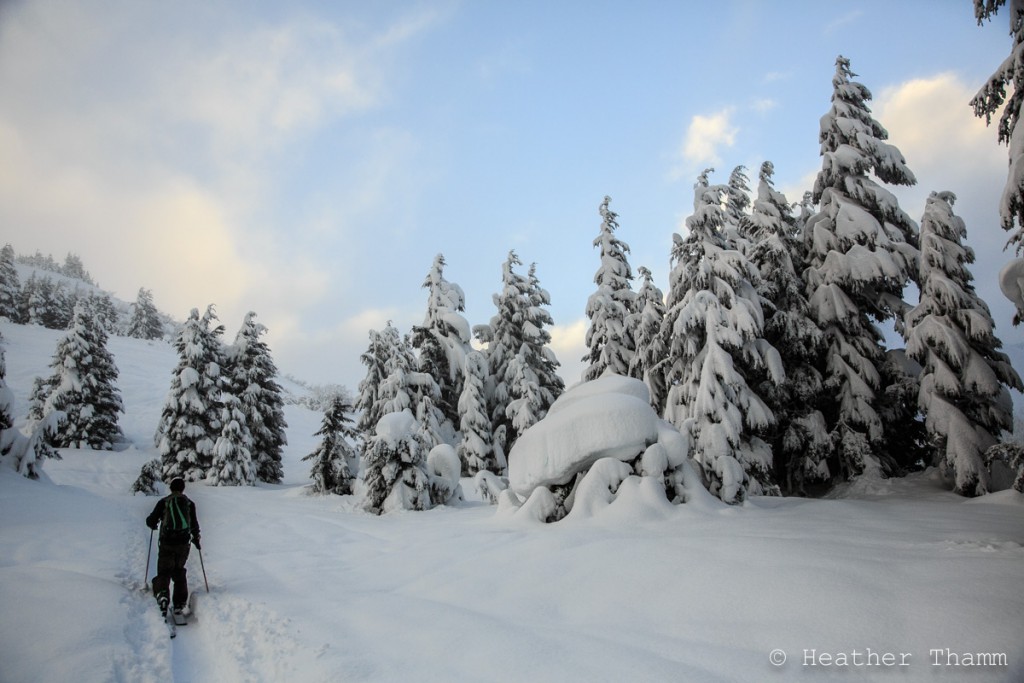 It’s important to note the current snowpack structure we are dealing with. A persistent weak layer of faceted snow is sitting on a firm bed-surface below yesterday’s storm totals. Observations yesterday confirm that this new snow was warm and wet below 1500’, but in the upper elevations it was dryer and unconsolidated. As this new snow begins to settle it will likely become more cohesive and “slab like” in the upper elevations. Additional loading due to wind and new snow will increase this process over the next few days. Warm temperatures can also cause a slab to become more cohesive. The scary part about this current set-up is that incremental loading will likely not tip the balance, leaving the slopes primed for a human trigger. The current forecast for today is an additional 5-7” of new snow and more snow forecasted through the weekend. Patience and avoiding avalanche terrain will be the key to not triggering an avalanche while this snowpack adjusts to its new load.

Yesterday 20 € of new snow was observed in the upper elevations of Turnagain Pass. This snow favored the Northern side of the pass and arrived with warm temperatures. Rain/snow line was around 1000′ leaving heavy wet snow along the Turnagain Pass road corridor. Winds were light to moderate from the NE.

Overnight skies cleared and temperatures dropped into the upper 20F’s. No new snow was recorded overnight and winds were light 10-15mph from the Northeast.

5-7 € of new snow is expected to arrive late morning. Easterly winds have already picked up this morning and will remain moderate, 15-30mph with Gusts in the 40 through early evening. Temps will be slightly cooler today with rain/snow line estimated for about 500′.

Snow showers and moderate winds are expected throughout the weekend.