The avalanche danger remains HIGH for the second day in a row both in the Alpine and at Treeline. Heavy rain has caused the snowpack to become very saturated and large natural wet avalanches are likely and human triggered avalanches are very likely. Deep slab avalanches 5-8′ thick are the primary concern at higher elevations and could propagate an entire slope. An avalanche of this size could reach lower elevations where channeled terrain exists making the avalanche danger CONSIDERABLE below treeline.

A springtime melt-cycle is in full affect. Heavy precipitation looks to be diminshing by late this evening. Large human triggered slab avalanches will be likely on Monday and if the sun comes out natural wet avalanches will also be likely. Mondays weather forecast is calling for scattered rain and snow showers with ridgetop winds diminishing to light to moderate from the Northeast. We are currently not updating the advisory on Mondays and Wednesdays. It is recomended to let the snowpack drain and settle for several days before heading back into the mountains.

Today is day two of a large storm system that has brought very heavy precipitation and gale force winds to our region. So far Portage has received over 6” of water in the last two days. Turnagain Pass has received 2.1” of water and another 1″ of water is expected for Turagain Pass today. Rain/snow line has been near 2000’ since late afternoon yesterday leaving the snowpack saturated at mid elevations. Wet avalanches below 2500’ will be very likely even on small features where these slabs could be deeper than you might expect.

Deep slabs are also a primary concern for today as heavy snowfall in the Alpine adds stress to an already stressed out snowpack. Slabs 5-8’ thick or larger are likely in the Turnagain Pass area and will entrain wet snow sitting in the mid elevation band. We are currently in a big transition from winter into spring and a variety of old weak layers are being re-awakened. Yesterday evidence of many large natural avalanches were observed from the Seward Hwy including the entire West Face of Magnum. On Friday, April 17th, two remotely triggered deep slab avalanches were witnessed on Tincan and luckily no one was caught.

The snowpack has reached its saturation point. Alyeska has also decided to remain closed today due to heavy rain and high winds. Plain and simple today is not a good day to be in the mountains.

A large avlanche on the West Face of Magnum released naturally sometime before 1pm yesterday. 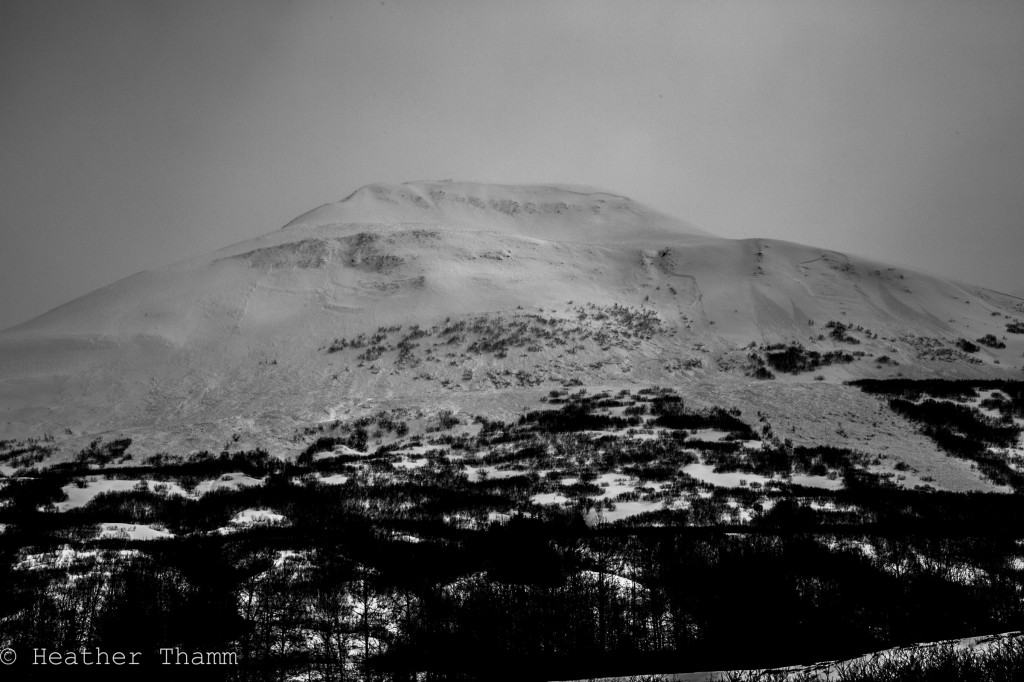 Fresh wet debris in a slide path called “Five Sisters” was observed yesterday in Portage Valley. This is a good example of channeled terrain that can funnel debris to low elevations. 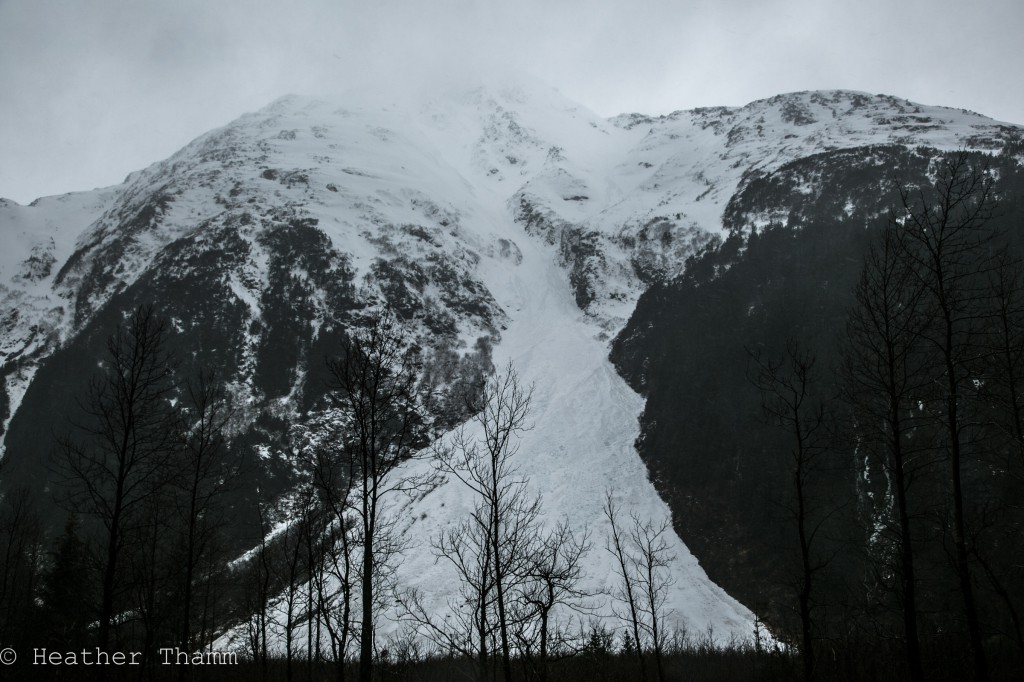 Summit Lake area has a much thinner snowpack, but very high winds and loading have caused recent natural avalanche activity. This picture was taken yesterday of the West Face of Lonestar Peak in Summit Lake. 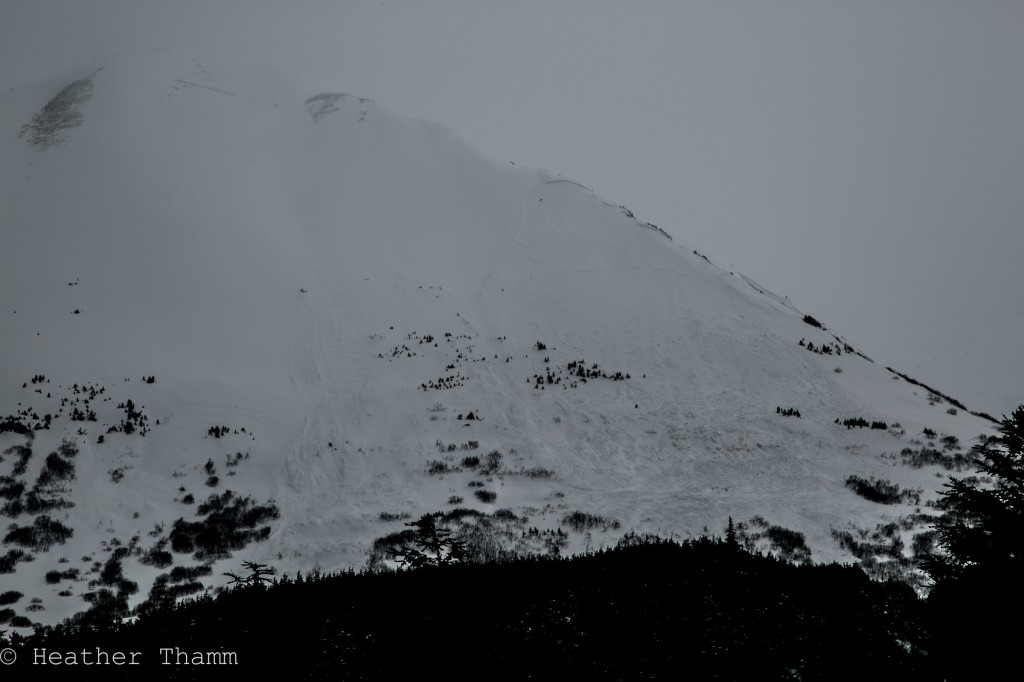 Yesterday a large low-pressure system brought heavy rain and gale force winds to the Southcentral region.  Portage has recieved over 6″ of water in the last two days and Turnagain Pass has seen 2.1″ of water. This fell as rain at sea level and rain/snow line moved from 500′ in the morning to over 2000′ by late afternoon. Temperatures were in the mid to 30s F to mid 40s F. Ridgetop winds averaged 49 mph at Sunburst with gusts into the 90s mph from the Northeast.

Overnight another surge of heavy rain and high winds moved through our region. Out of the 6″ of water in Portage, 4.2 € of water fell since 4pm yesterday. Winds continued to be strong along Turnagain Arm and Portage and along ridgetops in Turnagain Pass. Temps stayed in the mid 30s F at mid elevations.

Today expect rain and snow showers to continue throughout the day. Precipitation will be heaviest near Portage and Turnagain Arm. Ridgetop winds will be 30-40 mph from the Northeast.   Rain/snow line may start moving back down as temps cool slightly this evening.

Rain and snow showers look to be the theme for Monday and into the week. Expect temperature to be slightly cooler tomorrow with a possibility for snow showers at lower elevations.