Location: Tincan Avalanches off the North and South side of CFR ridge

EVENTS:
The avalanches were triggered as the group of 4 snowboarders rode down the CFR ridge. It was reported that the North slide broke right at one the snowboarders feet but no one was caught. It is unclear what avalanche released first and how far up the ridge, into the Tincan Chutes, the North slide propagated. Reports were that debris could be seen coming out of the chutes. See the google image for a general idea of where the crowns were located.

After the slides were triggered, the group of 4 were slowly making their way down the ridge when a party of two skied down, saw the avalanche and immediately began questioning the snowboarders and looking for other parties in the area. At the same time another group of 4 was skiing down Common Bowl and noticed the slide. Another party of 6 also was on scene relatively soon. There was also another part of 2 that saw the aftermath. Many of these folks took photos and some of those are below while all of them are on separate observations. Since the Southwest avalanche was on the side with people skiing/boarding, that is the area they focused on.

Both the party of 4 and the party of 6 who came across the Southwest slide (CFR Bowl) performed beacon searches at different times; this was not the party of 4 that triggered the slide but another party of 4. There were some down tracks and at least one up track that was covered by debris. There was no signal found by either group and later that night it was determined there were no missing persons. KUDOS to these folks for performing a search!

The party of 2 on CRF ridge had skied the North side 1.5 hours earlier and their tracks and transition spot were taken out. They were aware of the groups in the area and felt confident that no other persons were on the North side. This turned out to be true.

With little going on weather wise (snow and wind) there was distinct warming of the snow surface noted by each person we spoke with. The sun came out and people noted a green house effect occurring prior to the slide and before the storm hit. It is likely that this warming played a role in increasing the sensitivity of these slabs over the weak layer. Unfortunately, there are a lot of unanswered questions and it brings a new respect for unusual winters and the springtime transitions period from winter to summer. A bit more on weather and snowpack below.

Avalanche Details
If this is an avalanche observation, click yes below and fill in the form as best as you can. If people were involved, please provide details.
Weather & Snow Characteristics
Please provide details to help us determine the weather and snowpack during the time this observation took place.
Weather

Precipitation: The last precipitation event was 19" in 19 hours, ending at 6am on Tuesday April 14th.

Wind: Ridgetop winds from Sunburst weather station averaged 13mph from the East on the 16th. On the 17th, the Easterly winds began to pick up and by 2pm they were averaging 23mph with a gust to 45. These winds were the leading edge of a storm heading in. There were reports of strong wind in certain areas of the Pass at this time but the wind was only beginning to impact the CRF area by 2pm.

We do not have snowpack data for this slope. But, we are suspect that due to close proximity (one ridge over) and similar elevation and aspects (only 500' vertical higher), that the snow structure is similar to the Eddies ridge area and the avalanches that occurred there on April 11th. That observation with a profile can be found at: https://www.cnfaic.org/observations/eddies-49/.

In short, there has been 4-7' of snowfall since the beginning of April that has settled to 2-5'. This snow fell on a variable surface that consisted of a stout melt-freeze layer at elevations below 2,500'. There are areas where a thin (1-3") layer of moist rounding facets sits sandwiched between the warm sticky slab and the hard crust. These facets were the culprit in the Eddies avalanches and may be the culprit in these slides. 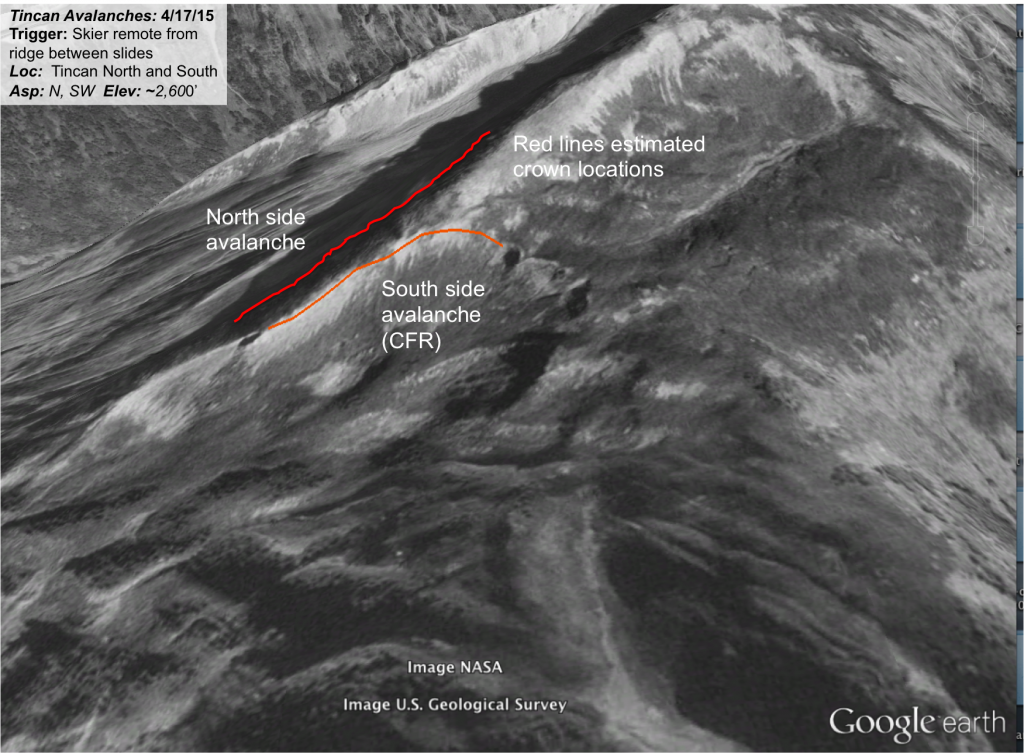 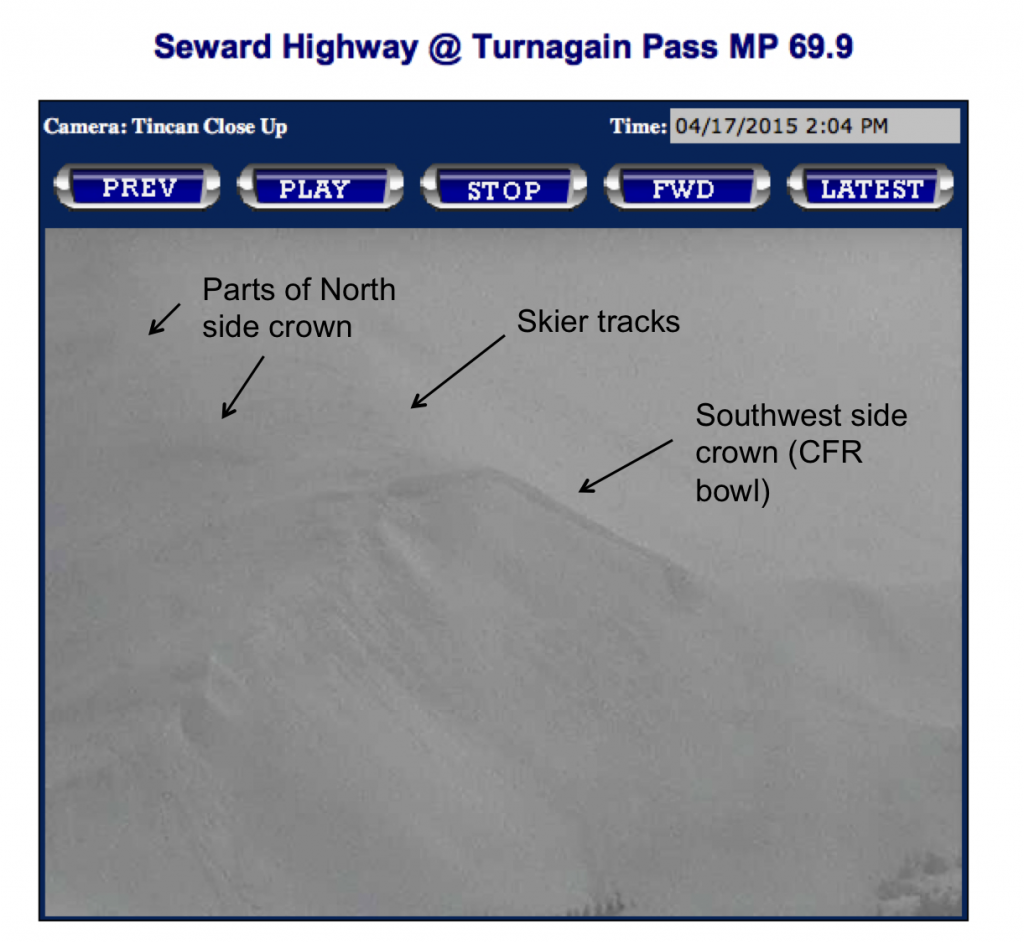 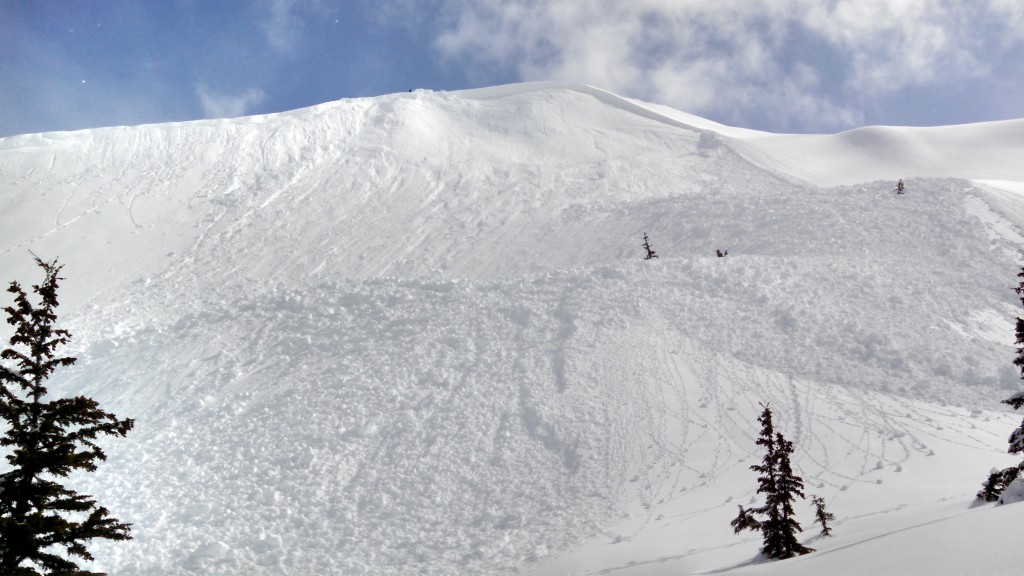 View of the crown of the CFR avalanche (Photo: Jeff Nelson) 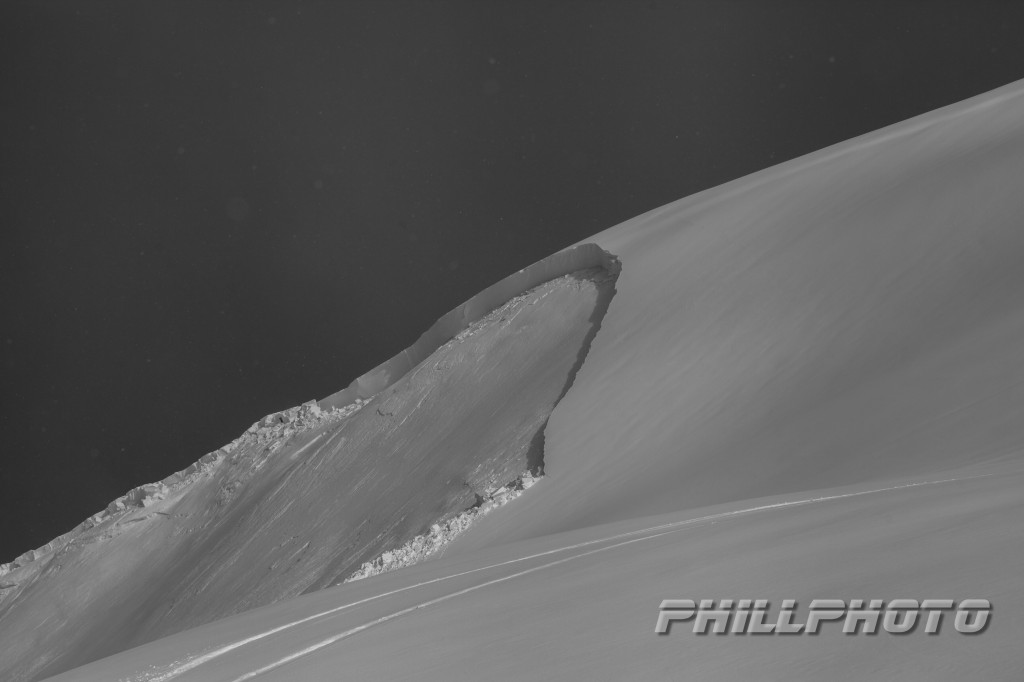 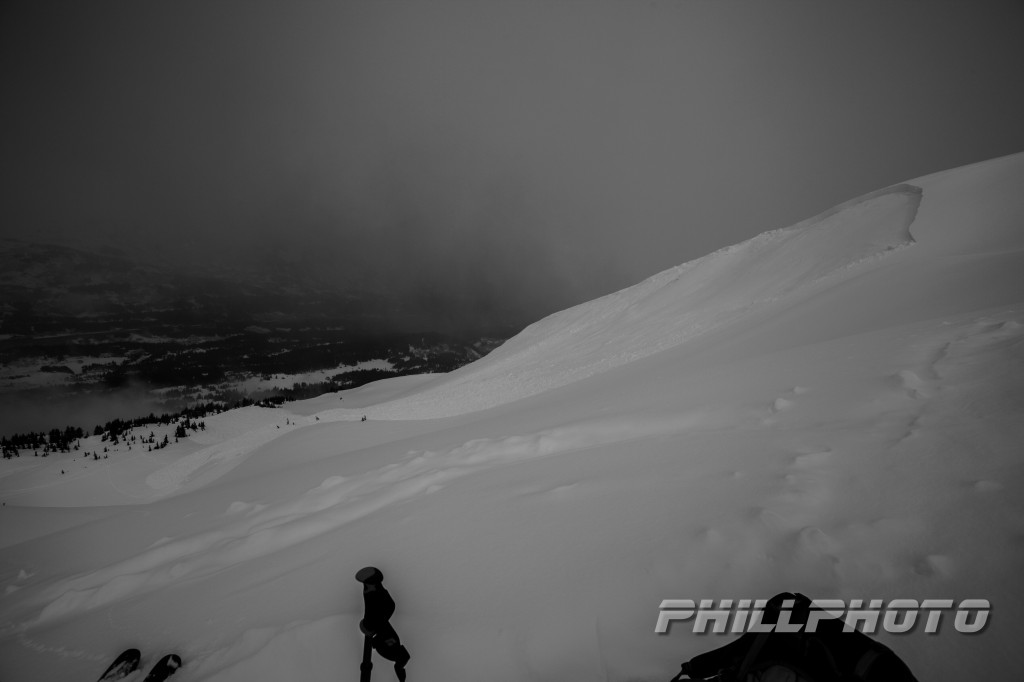 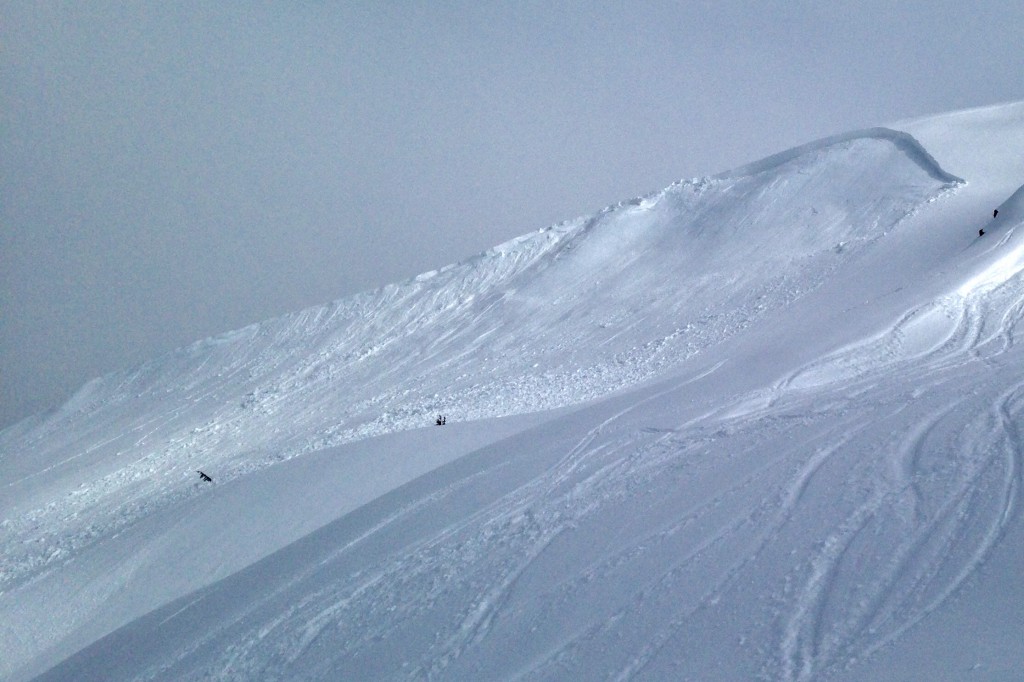 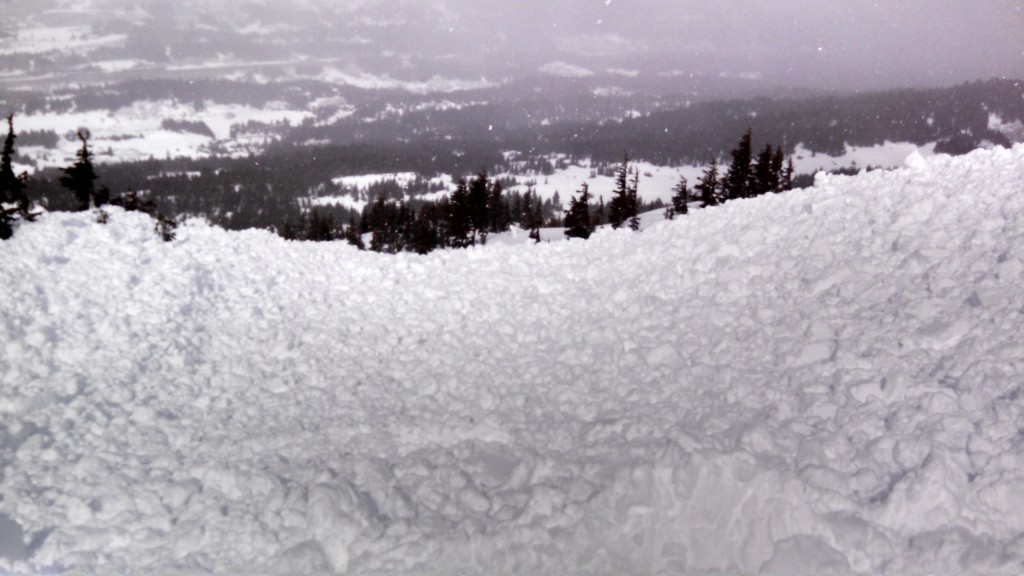 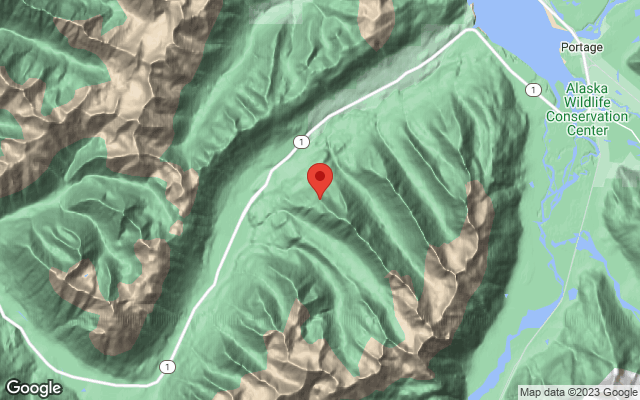