The avalanche danger will run the gamut from LOW to CONSIDERABLE today.

In the Alpine the danger is CONSIDERABLE on steep North facing slopes.   In this terrain it will be possible for avalanches 2-3′ deep to be triggered by humans and propagate across wide areas.   The likelihood of triggering will increase with large triggers (groups) and daytime heating.   The danger is MODERATE on all other terrain in the Alpine, where the possibility of triggering slabs still exists but is less likely.   Wet loose avalanches and cornices are concerns to manage in the Alpine today.

The danger is generally LOW at Treeline and will nudge into the MODERATE range on steep sunlit slopes during the heat of the day.

A lack of snow below treeline does not rule out the possibility of large avalanches running down into the lower elevations in areas such as Portage Valley and Crow Pass.   It is in these specific areas where the danger will be MODERATE due to overhead avalanche hazard.

*ATTENTION HIKERS heading into areas such as Crow Pass and Portage Valley.   Despite the summer like feel in the lower elevations, winter is still in full swing in the higher elevations.   Both of these areas have terrain that looms above popular hiking trails.   The threat of avalanches running down into the lower elevations exists and will be more pronounced during the warmest part of the day.   Plan your travel accordingly and avoid walking under avalanche terrain without the proper rescue gear and training.

A series of storms beginning in mid March gradually built up slabs that are now 2-3’ thick.  Those slabs sit on a wide array of underlying surfaces, the most concerning of those being weak faceted snow.  The most likely places to find this combo of dense slabs sitting on weak layers are slopes with any North facing component.  The challenging part to understanding this problem lies in the variability of the underlying weak layer.  On certain slopes it is widespread and on other slopes it is non existent.  As a result it will be possible to travel on one slope without incident and move onto an adjacent slope and trigger a wide propagating avalanche 2-3’ deep.

Large avalanches released this past week in this type of terrain.  Assessment of this problem is difficult.  As such, it will be important to pick terrain that allows for a quick exit.  Traveling on big sustained slopes on the Northern half of the compass is essentially a roll of the dice for now.  Remember that tracks are not an indicator of stable snow.

An example of the setup that is most suspect.  ~3 foot slab sitting on weak snow.  Difficult to trigger but high consequences remain.  This setup exists on many steep north facing slopes thoughout the forecast zone. 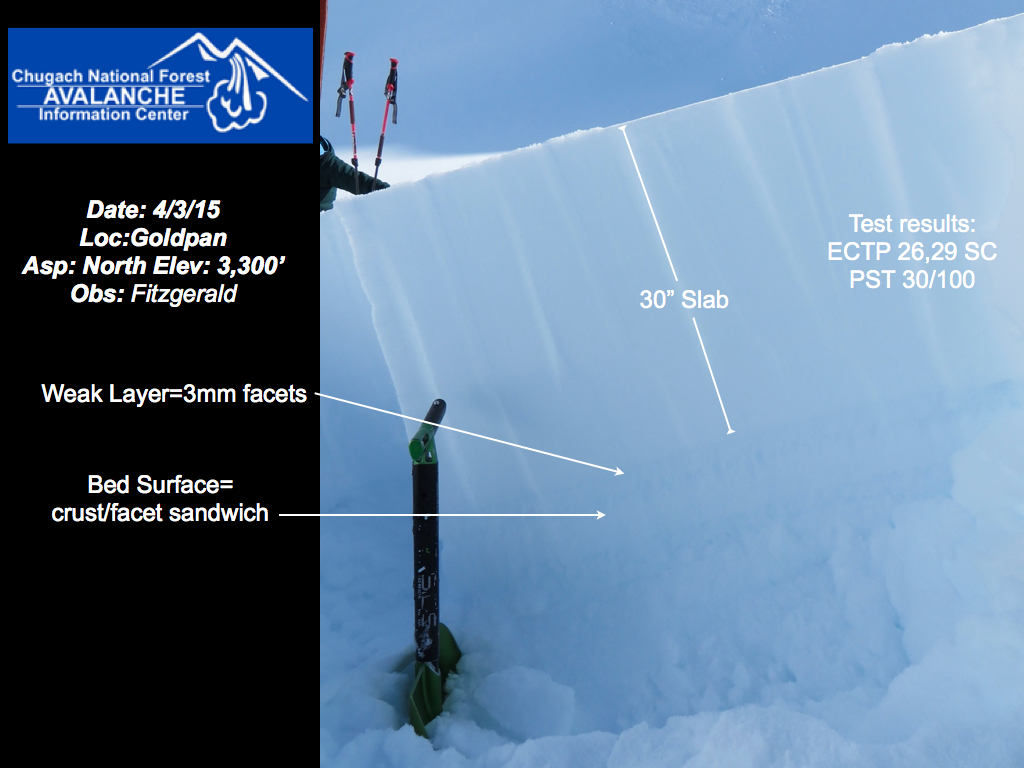 On steep sunlit slopes expect shallow wet loose activity today.  We are a few days into a consistent melt freeze regime with solid freezing at night and gradual warming of the snow surface throughout the day.  Timing is everything – there will be a window of time where riding conditions will be great, with only an inch or two of soft wet snow.  As that melting gets deeper into the snowpack it is time to dial back your slope angles.  Wet loose avalanches have the potential to carry or injure a person in large channeled terrain.

Cornices grew substantially over the last several weeks.  Cornices are looming over many starting zones and along ridgelines.  Always steer clear of cornices while traveling along ridges; identify where the cornice begins and the underlying terrain ends.  When traveling below cornices pick routes that keep time spent in the line of fire at a minimum. 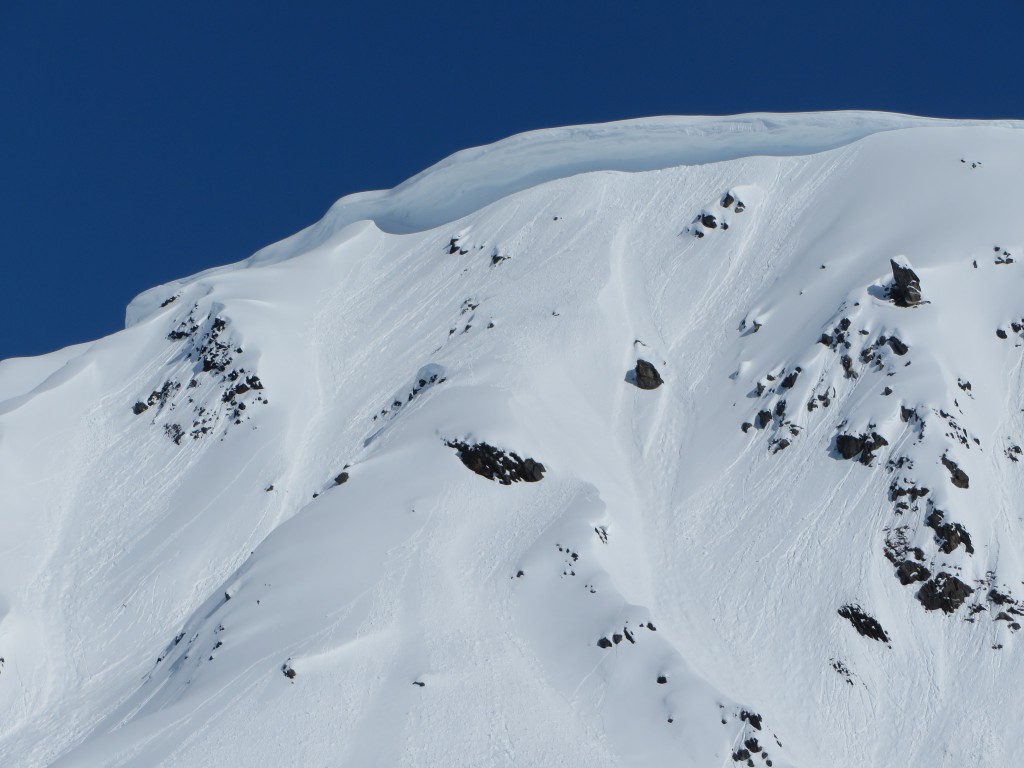 Today expect sunny skies, warming temperatures throughout the day and calm winds, as a ridge of high pressure sits over the area.   Temps will reach into the low 40s F at 1,000′ and winds will be out of the Southeast at 5-10 mph.

Tomorrow we can expect cloudy conditions with a chance for some light showers as active weather in the Bering helps to break down the aforementioned ridge.   Active weather will continue into the early part of next week with a greater chance for accumulating precipitation coming on Monday.