A MODERATE avalanche danger remains in the Alpine (above 2,500′) for slab avalanches ~2′ thick breaking in old weak faceted snow. This has been our most concerning avalanche problem lately and although the probability of triggering one of these slabs is on the low end, the consequences could be high. Safe travel protocol is key. Additionally, wet loose slides are possible on steep sunlit slopes in response to a sunny and warm day on tap. Although these will be shallow, they may release naturally and/or be easily triggered by a person.

Below 2,500′ the avalanche danger is LOW and triggering an avalanche is unlikely.

Marvelous March begins today with sunscreen weather – sunny skies, warm temperatures and light Northwesterly winds. It has been just over a week now since the last storm brought snow to the mountains and rain to 1,500′. Skiing and riding at Turnagain Pass these days takes one through a variety of seasons in order to get to winter – amazing really. Many folks have been heading North to Hatcher Pass where more snow has been falling lately – check up on those conditions on the HPAC website.

If you are headed to Turnagain today, the main concern for triggering an avalanche lies in a buried weak layer of faceted snow, around 2′ deep. This layer has been buried for a couple weeks now and has gained strength and adjusted to its current load. The weak layer also is most prevalent from 2,500 – 3,000′. Above 3,000′ it is harder to find in our pits and if found, harder to trigger. All that said, it is still yellow light conditions in the Alpine. Facets just can’t be trusted and we can’t forget about them. Although the likelihood of triggering a slide is low, the resulting avalanche may be large and destructive. A couple things to keep in mind today:

1- Obvious clues, such as collapsing/whoomphing, may not be present until it’s too late

3- Thin areas near rocks and rollovers are likely trigger spots

4- Large triggers are most likely to collapse the weak layer and potentially trigger an avalanche (such as several people close together).

5- Safe travel protocol! Exposing one person at time on a slope, watch your partners, have an escape route planned and discuss these thoughts with your group.

Forest walking at 1,200′ quickly goes to winter in the Alpine – Superbowl (headwall between Magnum and Cornbiscuit ridgelines) 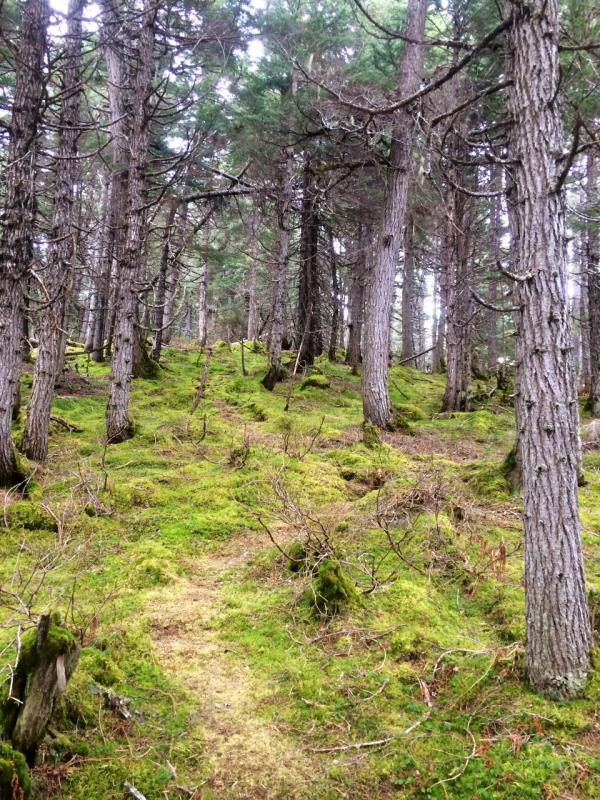 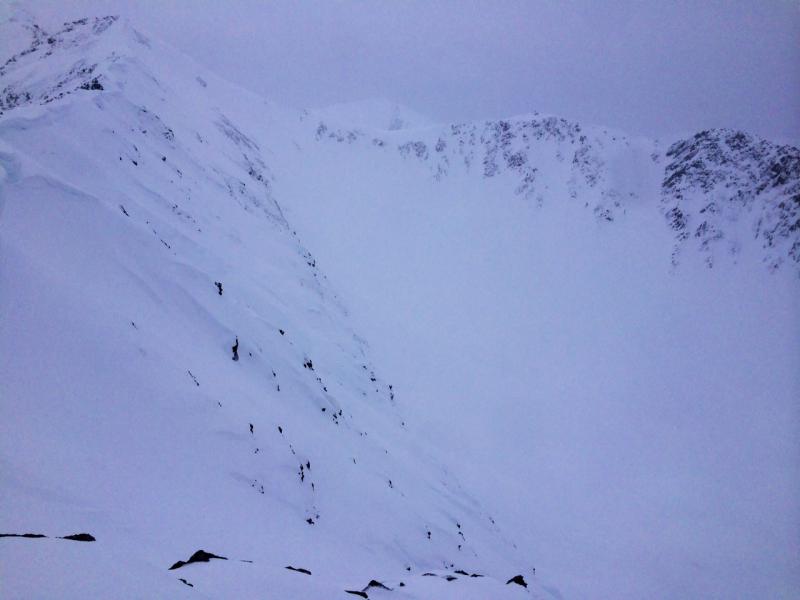 Direct sunshine, warm temperatures and little wind are likely to bake the South facing slopes. Shallow wet (or damp) loose avalanches may be seen in the 3-4″ of loose snow sitting on the surface. These could release naturally or be easily triggered by a person. However, they should be easy to recognize and avoid. Be wary of sustained steep chutes or gullies where channeled debris could pile up larger than anticipated.

It was a mild gray-bird day in the backcountry yesterday with overcast skies and light Easterly winds. Light snowfall, with some graupel in the mix, began in the late afternoon with a switch in wind direction to the West that was associated with a large-scale front moving through. From the few snow stations we have, it seems only a trace of snow was squeezed out of the front.

Skies have cleared overnight and valley fog has developed as a short lived ridge is building in currently. Mostly sunny skies should prevail today and continue through tomorrow while temperatures remain in the upper 20’s F on the ridgetops and near 35F at 1,000′. Ridgetop winds are expected to be around 10mph from the Northwest before becoming downright calm later in the day.

Monday night into Tuesday and Wednesday another low-pressure system heads our way bringing warm air and moisture from the South. Rain/snow line with this event looks to be in the 1,500′ range and precipitation amounts are in the 1″ H20 category. Stay tuned.