Today in the Alpine, above 2500′, the avalanche danger is MODERATE where triggering a slab 2′ thick is possible on steep connected slopes. This avalanche problem has become less likely in the last few days, but the consequences still remain high if the right trigger spot is found. Today ridgetop winds will increase throughout the day and small (4-6 €) wind slabs could become an additional concern. Be aware of changing snow conditions and practice safe travel protocols.

Below 2500′ the avalanche danger is LOW, where a firm supportable crust has formed on the surface.

Triggering a slab 2’ thick is becoming more difficult and less likely with time. In the last few days snowpack observations have revealed a weak layer of buried facets to be thinner and less reactive. The slab sitting on this weak layer also seems to be settling out and is not as thick and strong as it was a week ago in many places.

With that said propagation potential does still exist and triggering a slab avalanche is possible on slopes steeper than 35°. This problem will be more likely on Southern aspects where a sun crust/facet combo can been found. There is also elevated concern in the 2600-3000’ elevation band where this facet layer is sitting on top of a stout crust.

Triggering a slab will be more likely in these specific places. Avoid thin areas around rocks or steep rollovers on well-connected slopes steeper than 35°. Obvious clues such as collapsing/woomphing may not be present. A larger trigger, such as several people on a slope, may be just enough to initiate a slab in motion. Be sure to practice safe travel habits. Identify safe spots, move between islands of safety one at a time, and always have an escape zone in mind.

In areas such as Girdwood and above 4000’ in Turnagain Pass more uncertainty exists due to lack of information about these zones.

Moderate winds have eroded many ridgetops back to the “anti-tracks” created over two weeks ago making it easier to stay off of the slab in the Alpine. 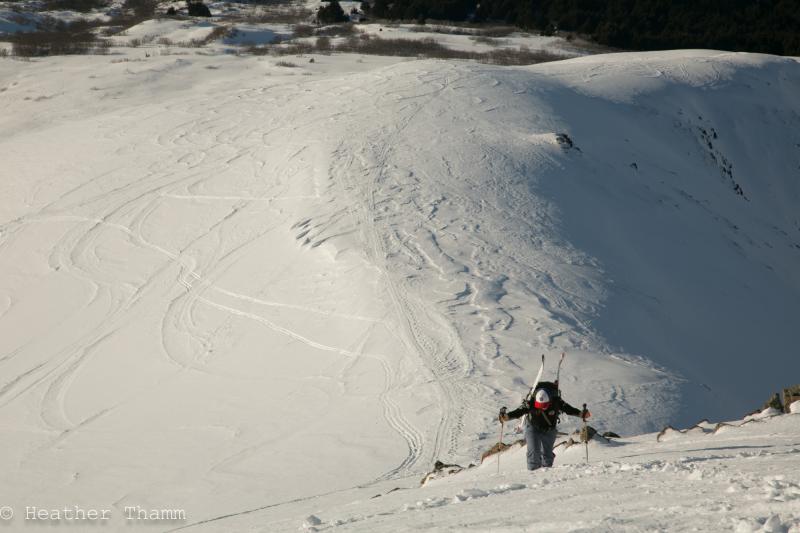 Today Northeast winds are expected to increase to 20-35 mph this afternoon along ridgetops. Only a trace of new snow is expected this afternoon and there is currently not a lot of snow available for transport. If winds increase as forecasted small pockets of isolated wind slabs, 4-6” are possible on leeward terrain features.

Yesterday a dense valley fog remained along Turnagain Arm, but in Turnagain Pass skies were clear and sunny.   Temperatures were in the 20’s F in the morning and reached the high 30’s F in the afternoon along ridgetops. Light winds 5-10mph from the Southwest kept surface snow conditions cool throughout the day.

Temperatures remained warm overnight, in the low 30’s F along ridgetops. Winds were light, averaging 10-20 mph from the East. No new precipitation was recorded in the last 24 hours.

A trace of new snow is expected this afternoon at higher elevations and light rain at sea level. Temperatures will remain warm in the low-mid 30’s F. Ridgetop winds from the North will be in the 20-35mph range. This evening precipitation and winds are expected to increase. Winds could be as high as 45 mph along ridgetops with up to 5 € of snow at higher elevations. Rain/snow line will be around 1000′.

Winds look to be backing off by late evening. Tomorrow more of the same is expected. Warm temps in the 30’s F with rain at sea level and up to a few inches of snow at higer elevations.