A LOW avalanche danger exists over most of Turnagain Pass, with pockets of MODERATE danger on wind exposed areas of the forecast zone. Old wind slabs 8-10 € can be triggered if found on slopes steeper than 40 °.

Attention Ladies: SheJumps, CNFAIC, and Alyeska Resort are joining forces to host a 2 hour avalanche companion rescue clinic at Alyeska Resort on Sunday, Feb.8 from 1pm-3pm. This is a free clinic for ladies only, and is a great place to practice your beacon skills. Click HERE for more info.

Today looks like a continuation of this week’s theme movie, Groundhogs Day. For those getting out into the mountains expect another day of sunny clear skies with relatively mild temperatures (20’s F) above 1000’. Over the last week this inverted weather pattern has been allowing backcountry skiers and riders to push further into the periphery of our forecast zone. In the Turnagain Pass area a mostly LOW avalanche danger exists, but there is still potential to find pockets of unstable snow. These pockets will be more likely in terrain steeper than 40° specifically in places that have had more wind exposure to create a slab 8-10″ thick on top of weak snow.

A few days ago two skiers triggered an isolated pocket of surface snow while boot packing up a steep Eastern convexity in the Seattle Creek drainage at about 2400’. This isn’t too surprising due to the fact much of the surface snow, top 3-6”, has been loosing strength over the last two weeks due to clear skies and cool temperatures. At mid elevations, below 3000’ a crust layer sits below this weak “faceted” snow creating the perfect environment for localized winds to form a slightly denser slab above. Pay attention to the consistency of the surface snow. If you find yourself in snow where the surface is stiff on top or feels hollow, watch your slope angles.

At higher elevations above 4000’ a crust/facet combo has been found in thinner areas of the snowpack. This weak layer/bed surface combination showed potential to propagate a slab 10–12” thick in a test pit near the Girdwood Valley. Be extra careful in steep terrain around rocks or convex terrain features where the snowpack is thinner.

Cold temperatures and clear skies have continued to make much of the surface snow weak and poorly bonded. In general this is a low hazard, but if riding or skiing on slopes steeper than 40° pay attention. Loose snow with enough volume and momentum can knock you off your feet.

Recent sluffing from ski tracks on a Northern aspect where the surface snow is weak and poorly bonded. 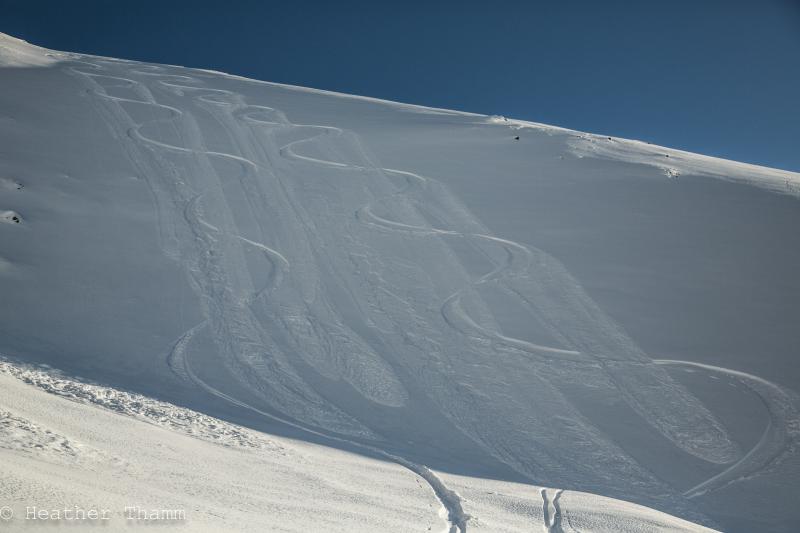 Believe it or not the sun has had enough radiation to affect the surface snow on Southern aspects. Several days ago this produced some small damp loose-snow avalanches, but cold evening temps have strengthened this into a crust leaving a thin breakable layer behind. Today the sun warrants an additional concern for any fair skinned creatures such as myself. Sunglasses and sunscreen might be a good idea while clear skies continue throughout the week.

Today looks very similar with sunny skies and dense patches of valley fog near sea level. Temperatures look to remain warmer during the day (teens to low 20’s F) but dropping into single digits into the evening. Light winds out of the Northwest are expected at higher elevations.

Expect more clear, dry, cold weather throughout the week. There has been some discussion about the high pressure over Alaska’s interior combining with a low pressure in the Southeast Gulf creating a tighter pressure gradient later in the week. In other words we could be feeling colder temperatures and strong Northwest winds in Southcentral Alaska near the end of the week.