A generally  LOW avalanche danger exists in the mountains surrounding the Eastern Turnagain Arm. The one exception will be pockets of MODERATE danger on upper elevation slopes for fresh wind slabs due to a bump in Northwest winds in specific locations. The most suspect areas are the Southeast face of Seattle Ridge and the Summit Lake zones. Any slabs that do form are expected to be shallow (6-8″ thick), soft, easy to identify and avoid.

If you are headed out in the backcountry today (and have a smart phone) consider participating in this very interesting research project: “Understanding Travel Behavior in Avalanche Terrain: A Crowdsourced Approach“.  Researchers from Montana State University are looking for data sets worldwide and we can help provide some valuable AK data!

A clear and very cold day is on tap today after a high-publicized snow event moved out yesterday. Despite a lot of cheering, our region came in near the end of the snow total race – seeing only few inches of new snow since Thursday. That said, low snow cover hazards remain below 2,000′ – hitting rocks, hooking alders, slipping on overflow ice, etc. But, there is fun skiing and riding to be had at the upper elevations! Keep in mind, many areas have a hard and slick surface under the top 4-6+” of loose snow which can make travel up, or down, in very steep terrain challenging.

Things to watch for if you are headed to the mountains:

Wind Slabs
Northwest winds picked up yesterday along Seattle Ridge and have continued to blow in the 15mph zone overnight. With several inches of loose snow available for transport, not only will these winds do some damage to riding conditions but also may form wind slabs on leeward slopes in the 6-8″ category. The Southeast face of Seattle Ridge is suspect along with other areas that may be affected by the Northwest winds. Any slabs found should be shallow, soft, drifted into pockets, easy to identify and avoid. Watch for smooth rounded surfaces and cracking in the snow around you. Before jumping into a line, sussing out the potential for a wind slab will be key.

Loose snow avalanches
Watch your sluffs on steep sustained slopes (> 40 degrees). These should be fairly low volume – composed of the top few inches of the snow.

Glide Avalanches
Glide cracks loom over terrain folks are traveling and avoidance is not always possible. However, limiting time spent under these – not stopping for lunch for instance – remains prudent, despite the cold temperatures.

Cornices
Cornices are hard and may pull back further than expected if you are traveling over them or messing around with them.

Mostly cloudy and obscured skies covered the region yesterday as light snow showers moved out. Girdwood picked up 2″ of new low density snow in the past 24-hours and Turnagain Pass an inch – making storm totals 4 and 2″ respectively. General flow direction (Southwest) with this storm favored the Anchorage area and North, such as Hatcher Pass. Winds were light from the East until shifting to the Northwest mid-day ushering in cold air.

Overnight skies have cleared and temperatures have PLUMMETED! Check out the graph from Sunburst below. A 29 degree drop in temperature in less than 36 hours – a legitimate puffy clothes day today for the first time this season. Currently, winds are 10-20mph from the Northwest and should be on a slow decline through the day. Temperatures should stay in the single digits at all elevations with skies remaining clear.

Sunburst weather station  ridgetop data ending at 6am this morning: 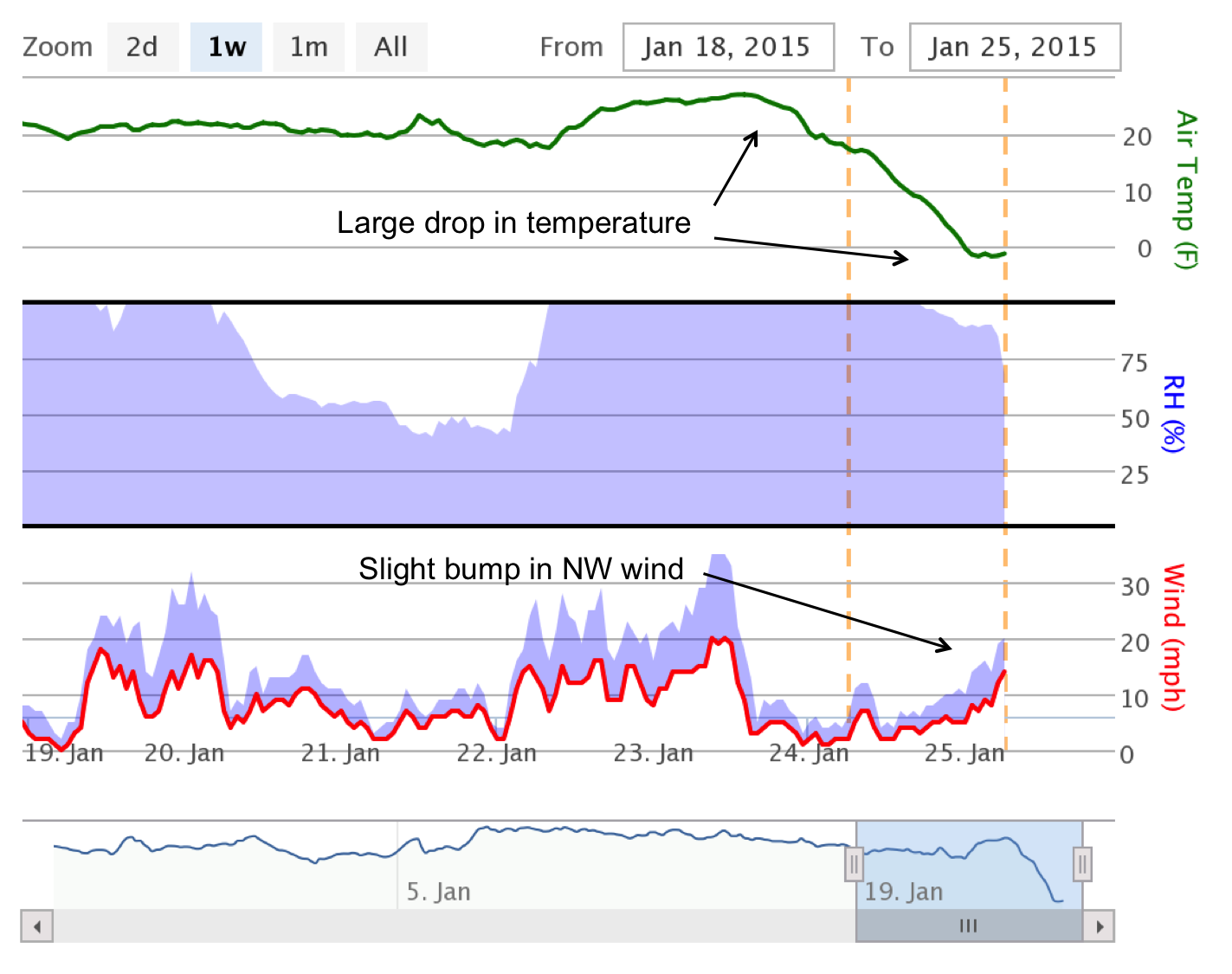 Tomorrow, cold and mostly clear conditions will prevail ahead of another low pressure system forecast to move in from the West mid-week. This looks to have cold air entrained, which is good for a low snow line, but models are showing most of the precip staying to our South and East – however that can all change as we get closer.

*Seattle ridge wind data below is 10pm-6am.   The wind sensor was rimed.