The avalanche danger is LOW in the Alpine and Treeline elevations today.   Triggering avalanches are unlikely.

At and below treeline €œearly € season conditions exist.   Meager snow coverage between 1,000-2,500′ will make for challenging travel.   Rocks, stumps, and slick surfaces are legitimate hazards to manage in the mid elevations today.

It has been over a week since the last significant loading event.  In that time temperatures have been mild and winds have been mostly light.  This has allowed instabilities that did exist in the upper portions of the snowpack to diminish.  Because of this it will be very difficult to trigger an avalanche today.

Keep in mind that LOW danger does not mean NO danger.  It is impossible to eliminate all risk if you are spending time in avalanche terrain in the winter.  Outlier issues today could come in the form of:

Wind Slabs
Moderate winds yesterday morning created very shallow pockets of wind slab above 2,500’.  These slabs are in the 4-6” range, low in volume and could grow slightly in areas receiving snow today.  If venturing into very steep upper elevation terrain be on the lookout for these small pockets as they could push you around or knock you off your feet.

Glide Avalanches
We continue to track and monitor glide cracks throughout the forecast area.  Cracks exist on all aspects and are generally found between 2,000’ and 3,000’.  The solution to this problem is simple: stay away from glide cracks.  They are unpredictable and could release at any time.

Eddie’s has many glide cracks.  Many on the South side have released.  Note the large crack on the headwall which has not released.  Photo: Fitzgerald 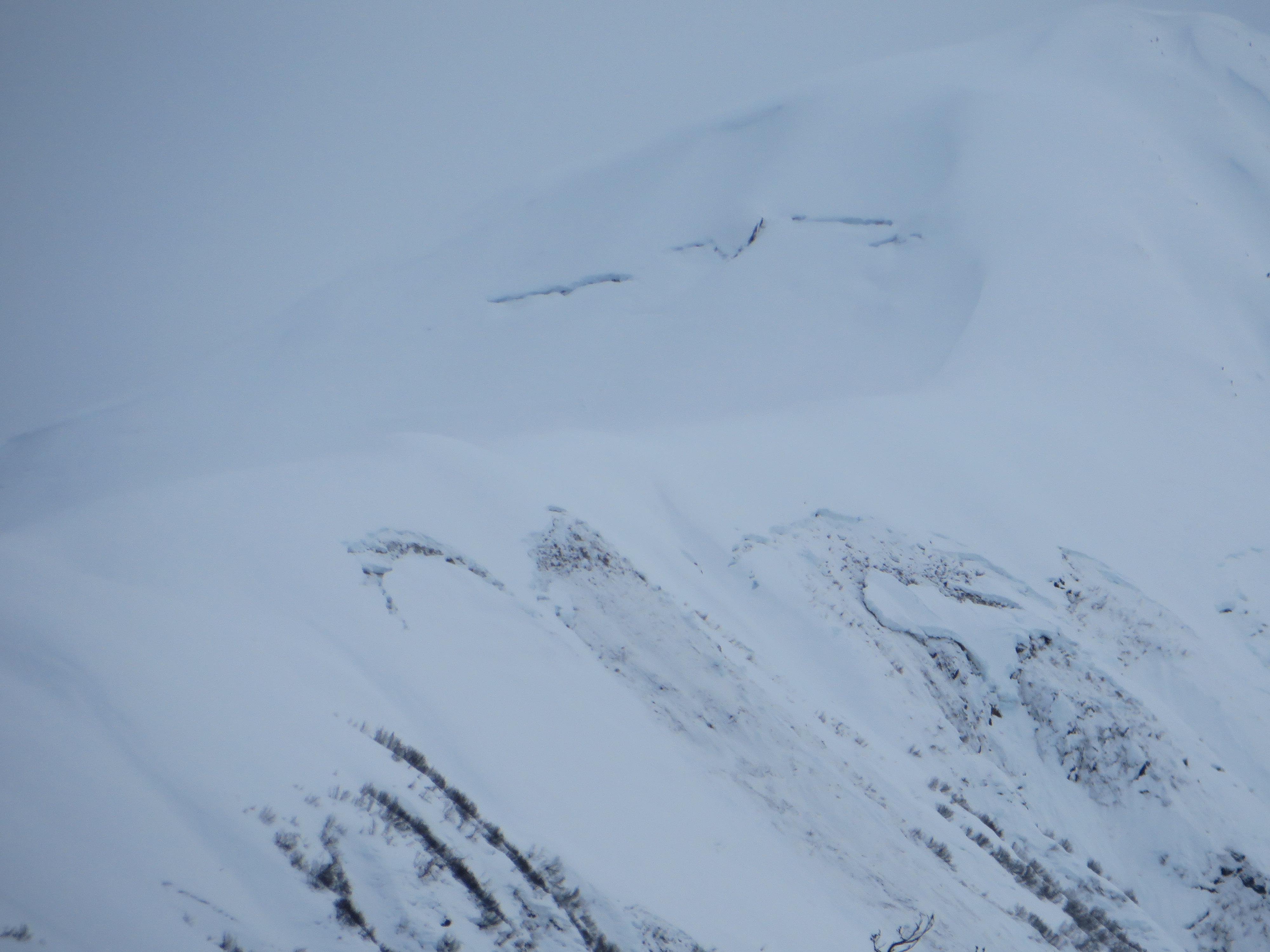 If you are traveling in steep terrain today it is important to follow good travel protocol:
-One at a time on suspect slopes
-Use islands of safety for spotting and regrouping
-Communicate decisions and plans effectively
-Be aware of other groups above and below

Don’t get lazy in times of LOW danger.  Developing good habits will serve you well when the danger is higher than it is today.

Over the past 24 hours the mountains around Eastern Turnagain Arm have picked up a trace to 2 € of new snow.   Winds have been light with ridgetops averaging in the 5-10 mph range out of a variety of directions.   Temperatures have been on a steady downward trend with ridgetop stations reporting in the teens F this morning.

Today expect lingering snow showers to give way to clearing skies and a drop in temps.   Some areas could receive an additional 2 € of snow.   Winds will be light out of the North in the 5 mph range.

A ridge of high pressure will begin building over the area later today and persist into the early part of next week.   Cold air will remain in place for the region with lows below zero F and highs in the single digits to teens F.