Over the past 48 hours we have received 1.5 – 3 feet of heavy storm snow sitting on a very unstable weak layer of buried surface hoar at elevations above 2500 ft. This is our first buried weak layer of the season causing us to keep the avalanche danger at HIGH today in the Alpine. Large human triggered slab avalanches are likely on steep slopes on all aspects. The danger rating at treeline will remain CONSIDERABLE due to the run-out of these slide paths and the possibility of triggering a slide from below. Travel in avalanche terrain is not recommended. The safest travel will be in simple terrain without steeper slopes above.

A persistent slab problem requires three ingredients; a slab sitting on weak layer on top of a bed surface. We have all three! 18 – 30 inches of recent snow has fallen over the last 48hours, enough time for the new storm snow to become cohesive enough to form a slab. This slab is sitting on buried surface hoar, ranging in size from .5cm to 2cm long (3/16in– 13/16in). These collapsible crystal formations can remain intact under a large load of snow for weeks or until the right trigger comes along to produce an avalanche. The bed surface varies with elevation ranging from a rain crust below 3000ft to an old snow interface at higher elevations. Both surfaces are smooth and surface hoar was observed at all elevations as it was forming December 11 -13th before the storm arrived.

We were able to safely travel on low angle slopes to about 2700ft on sunburst yesterday during the storm where we observed widespread buried surface hoar in most places above 2000ft.  Visibility was very limited and no natural avalanches were observed. We preformed two extended column tests both with an easy score of ECTP7 (Q2) at 35cm (14”) deep. This is an indication of poor stability – The snow pack has poor structure combined with enough energy to propagate a large slab avalanche. Triggering a persistent slab is most likely in areas where the slab is thinner like around steep rocks or along the edges of a gulley. Triggering a persistent slab can be tricky and can give a false sense of security. Initiation is usually in places where the snowpack is thinner and where the buried surface hoar is still intact like below scoured ridgelines. A human could tip the balance and current snowpack is deep enough to connect an entire slope and could easily bury a person. 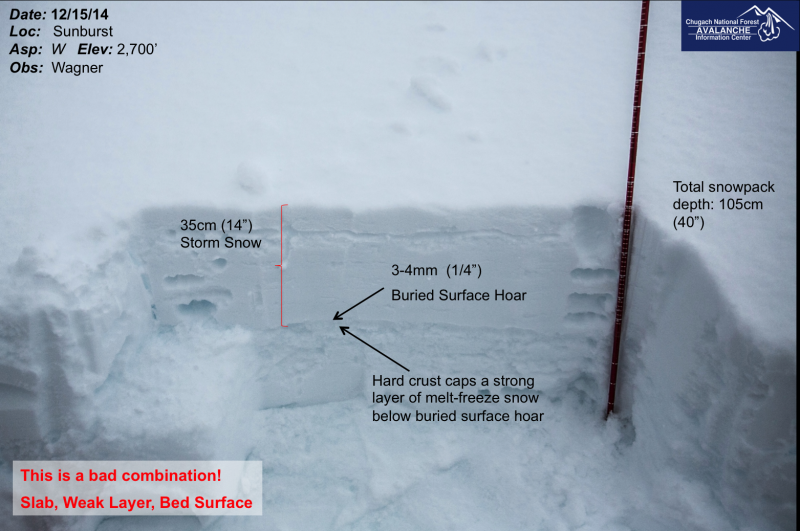 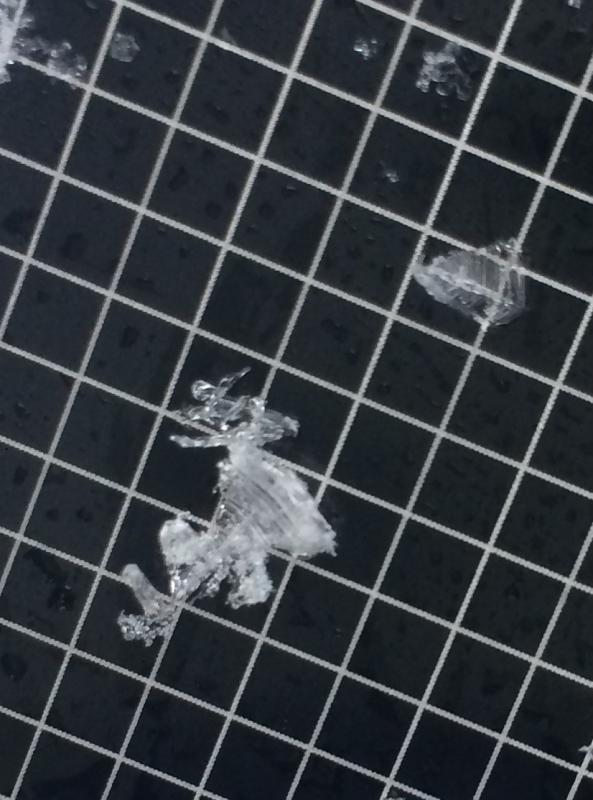 Wet Avalanches were observed below 2500ft on steep terrain.Due to warm temperatures and moderate to heavy precipitation and snowfall loose wet avalanches are likely in mid elevations below 2500ft. Temperatures are expected to remain warm with the chance of rain/snow line dropping slightly throughout the day.

Overnight €“ Temperatures remained above freezing at lower elevations and rain/snow line remained around 1500ft. Precipitation continued throughout the night with .7 inches of water over the last 12 hours at Center Ridge SNOTEL, mostly in the form of slush and ridgetop winds backed off slightly averaging in the mid 20’s from the East.

Wednesday into Thursday – A series of lows is stacked up and will continue to bring warm air and light precipitation over the next few days.