There remains a MODERATE avalanche danger today for triggering a slab avalanche 12-18 € deep. The chances for finding and triggering a slab will be most pronounced on steep slopes (approaching 40 degrees and steeper) and on all aspects near and above treeline. Conditions today remain similar to those on Thursday when a skier triggered a sizeable avalanche on Turnagain Pass.

From outside of our advisory area we had a report come in yesterday of a skier triggered class 2 avalanche (no one caught). This was in the South Fork zone north of Anchorage. You can read it  HERE.

For most folks that have been in the backcountry lately it is hard not to notice the collapsing in the snowpack. Other than a few avalanches in the past week, this has been our prominent ‘obvious clue’ as to the weak snow lying 12-18” below the surface. If you look at the two observations sent in yesterday, both highlight collapsing (or whoomphing). You can see them HERE and HERE. Other red flags are found by digging in the snow. However, a collapse trumps all and essentially means that if a slope is steep enough chances are it will avalanche.

With weak layers in the pack that are hard to assess from the surface, keeping with safe travel practices will help to hedge your bets if riding/skiing on steep slopes. These include watching your partners, exposing only one person at a time and having an escape route planned if the slope avalanches.

Below is a cross section of the snowpack at 3,200′. You can see a vertical crack in the ‘slab’ and the weak snow (lighter colored) below a crust. This if from a snow pit on Magnum, SW facing. – more details and video HERE. 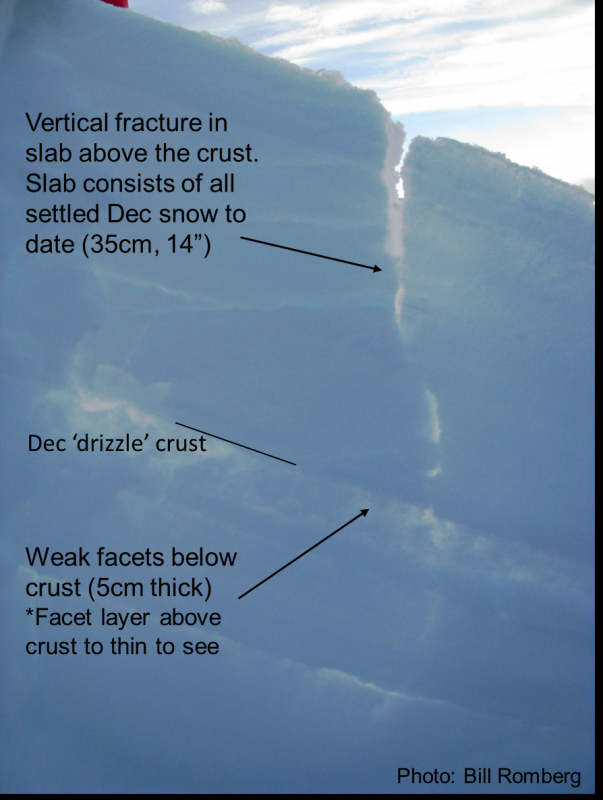 We received 2-3″ of snow from Friday night that was blown into drifts on the ridgelines. Cornices grew a bit with this event and some small to medium natural cornice failures were seen yesterday. This snow has shown signs of bonding well with the surface and is now part of the ‘slab’ mentioned above.

Below treeline the slab is losing its cohesion and the pack is unsupportable. Though there is some localized collapsing in the alders, triggering an avalanche is unlikely.

During the past 24-hours we have seen a slight warm up above treeline (20-25deg) and a slight cool down at sea level (upper 30’s to low 20’sF) due to minimal cloud cover producing a weak inversion. Winds have been light from the Southeast and have switched to the Northwest overnight. We only picked up ~3 € above treeline with Friday night’s snow event.

Today we will see a weak disturbance move over us from the Gulf bringing mostly cloudy skies and continued warm temperatures. Ridgetops will be in the mid 20’sF with winds shifting back to the Southeast and picking up through the day to the 20mph range by the evening hours.

There is a possibility for precip on Tuesday into Wednesday as a warm low pressure system moves in from the South. How much will depend on the track this low takes but it is fairly warm with rain at sea level likely.