We have a CONSIDERABLE avalanche danger above treeline today where deep and deadly avalanches can be triggered by a person on slopes steeper than 35 degrees. Several large avalanches were triggered yesterday and Sunday with one very large slide in the Turnagain Pass region. This snowpack is still adjusting to the load placed on it over the weekend and demands respect. Expert level travel skills and very conservative terrain management is required for a safe day in the backcountry.

Alaska DOT will be conducting avalanche hazard reduction work today Tuesday Jan. 15 2013 9:00am-10:00am between Girdwood and Portage.   There will be traffic delays. Updates posted at  511.alaska.gov.

The deep slab instability reared its head the past couple days in the Eastern Turnagain Arm area. This was at the tail end of a two day storm that brought warm temperatures and 2-5″ of rain below treeline with 20-40+” of snow above treeline. This was a ripe set up for big slides as it all fell on top of a snowpack harboring persistent weak layers near the ground. There are several large avalanches to report – both natural and artillery/explosive triggered. Most of these occurred along the Seward Highway between Bird and Girdwood as the Alaska DOT conducted avalanche hazard reduction work (another video here). Also, Alyeska Ski Patrol was able to pull out one very large deep slab on the North Face yesterday. For natural activity, a large natural avalanche deposited a powder cloud and a small amount of debris on the Seward Highway near MP 94 while the road was open to traffic. The majority of the debris stopped above the highway elevation.  Dot crews responded immediately to reduce the avalanche hazard near this location. There were two additional large natural avalanches – one on Mount Alpenglow and another in the Lynx Creek drainage (Turnagain Pass zone).

The very large Lynx Creek slide (pictured below) is most concerning for backcounty recreationalists as it points to unsurvivable deep slab avalanches near the tipping point in our core forecast zone. 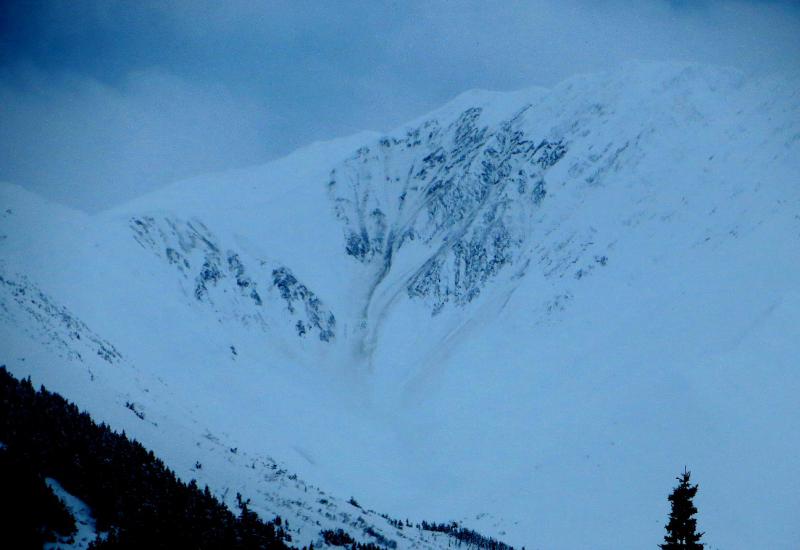 The message for today is simple: Patience while the snowpack adjusts to the rapid changes it received over the weekend is vital. Keeping off slopes steeper than 35 degrees, especially in the larger terrain, and out of runnout zones will be key. The powder will likely be enticing at the higher elevations but the consequences will be high for anyone pushing the steeper slope angles.

Temperatures have cooled off overnight and this will help to stabilize the snowpack, more so below treeline where the pack was mostly wet yesterday. Crusty surface conditions can be expected in these below treeline areas with dryer snow above. The weak faceted snow near the ground, responsible for our deep slab problem, will be adjusting at a much slower rate however and our recommended travel on lower angle slopes will persist.

Both fresh wind slabs forming today as well as some lingering slabs from the storm will be good to watch for. These will be above treeline in the upper elevations where dry snow fell despite the warm storm. The new and older slabs will likely be on different aspects as the wind has shifted from the east to the west overnight.  Watch for fresh slabs today in areas that did not load during the storm. These west winds could also overload the deeper weak layers in areas that were not stressed with wind loading prior. Add to that, any wind slab triggered has the potential to step down and trigger a large deeper slab with unfavorable results. These are just a couple more reasons to keep terrain choices conservative out there..

The warm river of moisture over us the past few days has moved east overnight. Skies have cleared, temperatures dropped and winds have shifted around to the west where they are bringing in colder air. There was only a trace of rain on Turnagain Pass yesterday morning but the day remained quite soggy. Girdwood Valley picked up .2 € water and ~2 € of snow above treeline in the morning. Storm totals between Saturday morning and Monday morning were 2″ rain (~14″ snow) on Turnagain Pass and 5″ rain (35+” snow) in the Girdwood Valley. Upper elevations had higher snow amounts.

Today, expect winds to pick up from the west to the 20-30mph range on the ridgetops and temperatures should continue to drop to the mid- teens on the ridges and low 20’s on the Pass at 1,000′. Skies should be partly cloudy with some high clouds and fog in areas.

Tomorrow a weak system moves through bringing some cloud cover, warming temperatures and slight chance for a few inches. Thursday and Friday it looks like cold and mostly clear conditions set in for a change from our onslaught of storms since Christmas.

Kevin will issue the next advisory tomorrow morning, January 16th.