We are issuing advisories 5 days a week through November on Sat, Sun, Tue, Thur and Fri.

The next advisory will be issued Tuesday, November 27th.

ANNOUNCEMENTS
We would like to pass on our deepest condolences to the family and friends of Rob Hammel who passed away yesterday in an incident on the Seward highway. Rob was part of the Alaska DOT avalanche program and a longtime member of the Girdwood, Alyeska and avalanche communities. He will be greatly missed.

BOTTOM LINE
The avalanche danger will remain MODERATE today on slopes steeper than 35 degrees above 3000′. Human triggered avalanches are possible where a slab overlies weak snow from October. These areas are scattered at the upper elevations, predominantly on south, west and northerly aspects. Below treeline there is a LOW avalanche danger.

This BOTTOM LINE will also pertain to Monday, November 26th.

It was a quiet day in the backcountry yesterday with no slab avalanche activity reported. Though we are starting to see some sluffing in the loose facets in very steep rocky terrain. The snow surface conditions in most areas consist of loose recycled powder with 1-3cm surface hoar on top.

As far as our snowpack situation and the “persistent slab” problem goes, it continues to be a concern. Though the slab is slowly deteriorating into one large weak layer with cold, clear and calm weather there are still places at the upper elevations that have the potential to avalanche. We found one such area yesterday in the Turnagain Pass region where pit results pointed to instability on a suspect slope containing the slab/weak layer combo. What we are finding is that there are slabs that still have the potential to propagate but triggering them is becoming more difficult. A video and more details of our field day HERE.

Slopes that are most suspect to avalanche are those in the 40 degree range and unsupported from below. These slopes are also not the most enticing due to thin coverage. Using a pole to feel the snowpack structure and watching for collapsing (whoomphing) and cracking will be your best clues to suss out this poor structure.

Other observations that have come in from surrounding areas show current instability as well as future weak layers when we get our next bout of snow. One from the Girdwood Valley and one from the Lost Lake area near Seward.

Below treeline we continue to see a snowpack that is rotting away with the cold and consists of faceted snow with a degrading crust ~10” deep. Where slopes are steep enough, initiating sluffs in the loose facets is possible.

The image below is an avalanche incident rose from Nov 2nd (first snowfall on the October facets) to present, Nov, 24th. The rose shows aspect and elevation of all avalanches (both natural and human triggered) we have recorded. We feel all of these slides broke in the October snow. The last avalanche reported was the Sunburst natural on Nov 21st / 22nd. 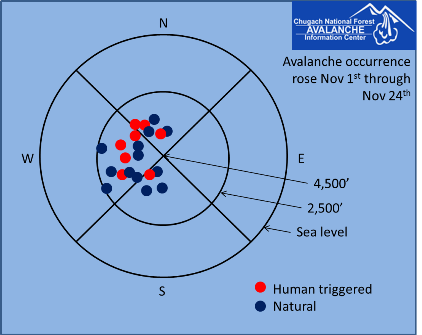 Single digit temperatures are locked in at the lower elevations and parking lots and look to remain this way for several more days. At just 2000′ however, temps are up to 20F and in the high teens on the peaks. This is quite the inversion. The easterly winds that have remained very light did bump up slightly last night (~15mph) on the ridgetops. The winds are back down to ~5mph this morning where they are likely to stay. No precip is forecast for several days…

Though there are a few small low pressure systems in the Gulf, they are not impacting our region – what we need is a large scale pattern shift and the removal of the blocking high pressure over mainland Alaska. Hopefully we will see this later this coming week.

I will issue the next advisory Tuesday morning, November 27th.