The avalanche danger will remain MODERATE above 1,000′ on all aspects. Cooling temperatures will be helping to freeze and stabilize the snowpack, yet strong westerly winds may be enough to create new wind slabs in the Alpine. Be cautious on slopes that are still moist/wet from the warm temperatures, especially where the snowpack is shallow, as there still could be a chance for triggering a large slab avalanche breaking in buried weak layers.

Below 1,000′ the danger is LOW and triggering an avalanche is unlikely.

SUMMIT LAKE:  Extra caution is recommended as the snowpack is weaker and shallower. Several large avalanches occurred in this area on Sunday that broke into buried weak layers and human triggered avalanches remain possible.

Hey Everyone! The Friends of the Chugach Avalanche Center’s ‘Member Appreciation Giveaway‘ just got better. For anyone donating $100 or more by January 10th, you are entered to win a FREE stand-by heli-skiing day with Chugach Powder Guides. This is on top of the airbag pack and skis donated by AMH and SkiAK. Get your membership today – more details HERE. A big thank you to all our supporters!!

It is a bit of a transition day for the snowpack as colder air is moving in with sustained strong west winds. Overnight, temperatures have dropped to the mid 20’sF in the higher terrain and through the day, valley bottoms should see numbers near 30F. The wet layer of snow that capped the snowpack to ridgetops should now be a crust, or very soon will be. From the little we know now, the crust is variable; very thin to maybe an inch at Turnagain Pass and thicker to the south near Summit Lake. Not to mention, the crust should get thicker with elevation as warmer conditions were seen along the ridgelines vs the cooler air that was trapped in valley bottoms. Furthermore, the light rain that fell yesterday evening will have only added to the wet layer. We will see in the next couple days what damage this crust has done to the ski and riding quality.

The other thing that will give us some insight into how thick the crust is, is if the strong west winds forecast through the day will be able to transport any snow. Sunburst weather station gusted to 62mph around midnight and other stations have been reporting these strong winds. If you do head out, watch for any signs the winds are able to move snow. If this is the case, touchy wind slabs may be found, likely sitting on a crust. 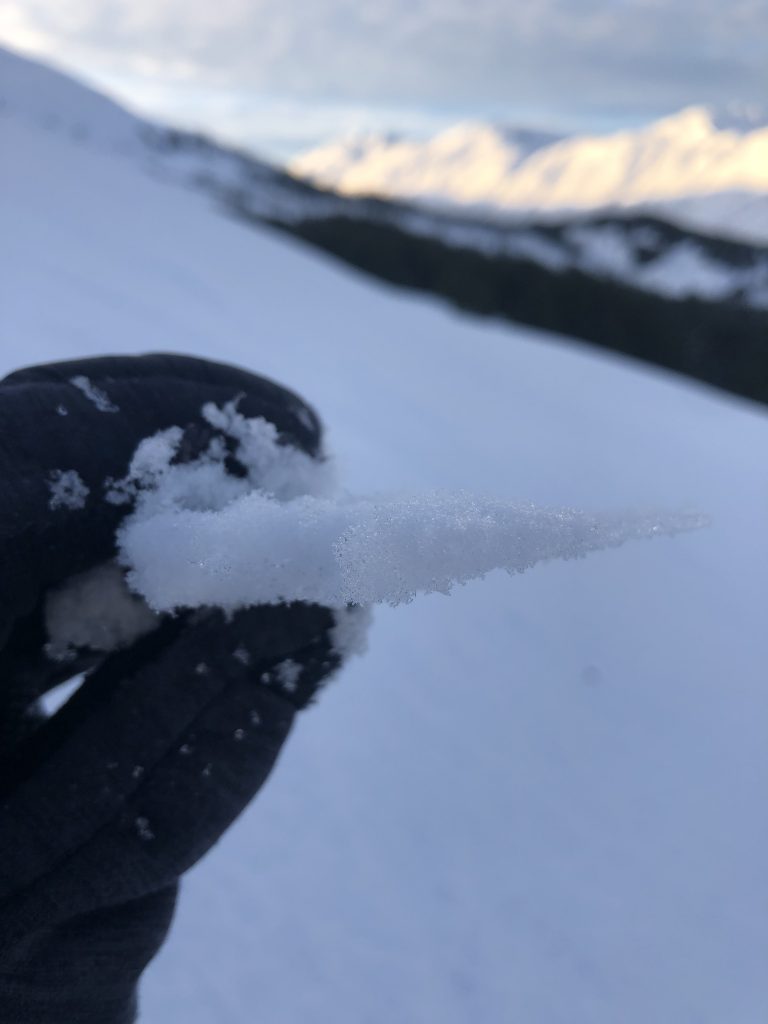 The other, and more uncertain avalanche issue, is what the buried weak layers are doing, or not doing, as the surface freezes up. These weak layers are under 3-5+’ of a dense layer of snow at Turnagain Pass, but are only under a couple feet on the southern end of the forecast zone and even less in places at Summit Lake. Although there were no avalanches that we know of the past two days, there were several large natural avalanches on Sunday, the first warm day, breaking in these old weak layers. One was just inside our forecast zone on Twin Peaks and the others were to the south in Summit Lake.

Moving forward, signs are all showing that at Turnagain Pass where the snowpack is thicker, it’s becoming very unlikely that a person could trigger a deep slab avalanche. The south end of the forecast zone and areas with a shallower snowpack are still a concern until they freeze up. Once they do it’ll be a question as to how stout surface crusts are and if any water that percolated under the surface and into the weak layers freeze, in order to determine if the weak layers are healed up or not. For today, be wary of these shallow zones if they are still harboring wet snow.

This all said, there is hope for some better snow quality for New Year’s as several inches of snow could fall early Friday morning. Cross your fingers!

Yesterday:  Mostly clear skies gave way to cloudy skies and light rain to ridgetops yesterday evening. Around 0.2″ were seen at most stations. Ridgetop winds were 5-10mph from the west during the day before bumping up to 15-25mph with gusts near 60mph overnight. Temperatures were in the upper 30’s to 40 during the day before they dropped along ridgetops with the bump in winds and are slowly dropping in valley bottoms this morning.

Today:  Partly cloudy skies, cooling temperatures, and breezy west winds are in store. Temperatures should make it to the teens along ridgelines and near 30F in valley bottoms. Ridgetop winds will remain northwesterly and should stay in 15-25mph with gusts 40-50mph.

Tomorrow:  Another mostly clear sky day is forecast tomorrow. Winds should be light and variable and slowly backing to the east ahead of a weather system setting up for Friday, New Year’s Eve. Right now it looks like we could get 3-6″ of snow to sea level. Stay tuned!