The avalanche danger remains MODERATE on all aspects and elevations. Warm temperatures again today will make it possible to trigger a wet loose avalanche or a larger more dangerous slab avalanche that could break in buried weak layers. Areas with a shallow snowpack, mostly found on the southern end of the forecast zone, are the most concerning. Much uncertainty exists with the warming and a cautious mindset is prudent.

SUMMIT LAKE:  A shallower and more dangerous snowpack exists in the interior Kenai. Natural avalanches are possible and human triggered avalanches are likely where the snowpack remains warm and/or wet. Cautious route-finding is essential as large slab avalanches, breaking in buried weak layers, could occur.

Roof avalanches:  Warming temperatures today with some light rain possible this evening may cause roofs to shed their snow. Keep an eye out for children and pets.

No avalanches occurred yesterday that we know of.

We did get more information on some natural avalanches that did occur two days ago, on Sunday. This was the first day of the warm up.

These three avalanches were in the interior Kenai, harboring a very shallow snowpack, and to the south of the forecast zone: 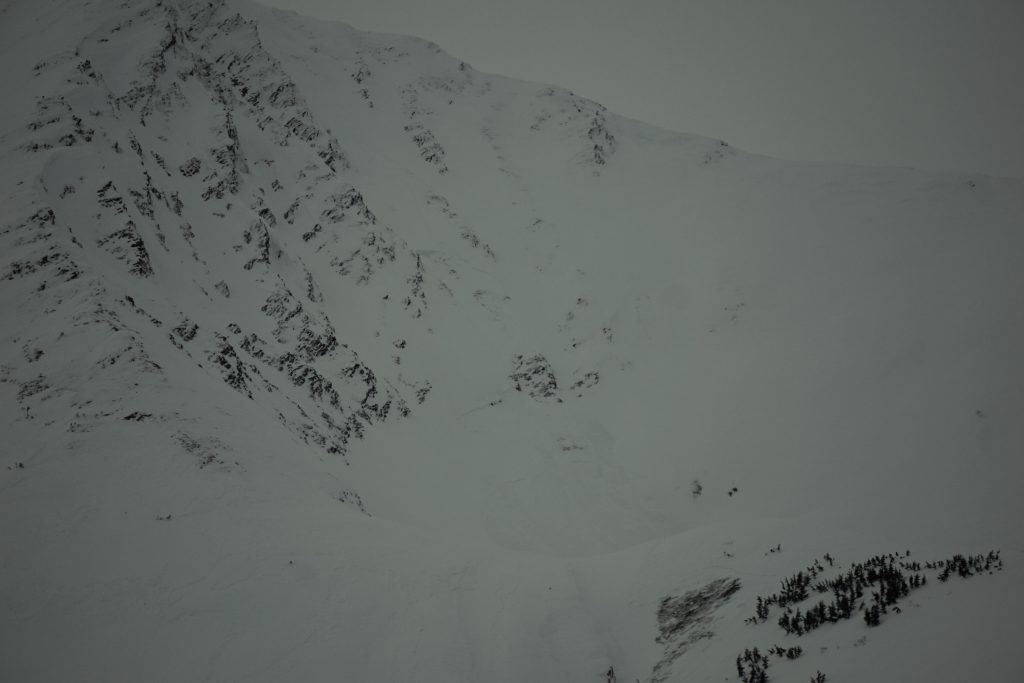 Natural avalanche on Twin Peaks, likely released 12.26.21. This one looks like it was triggered by a small wet loose avalanche that released just above the deepest part of the crown tucked up in the rocks just to the left of the center of the frame. Photo taken 12.27.2021. 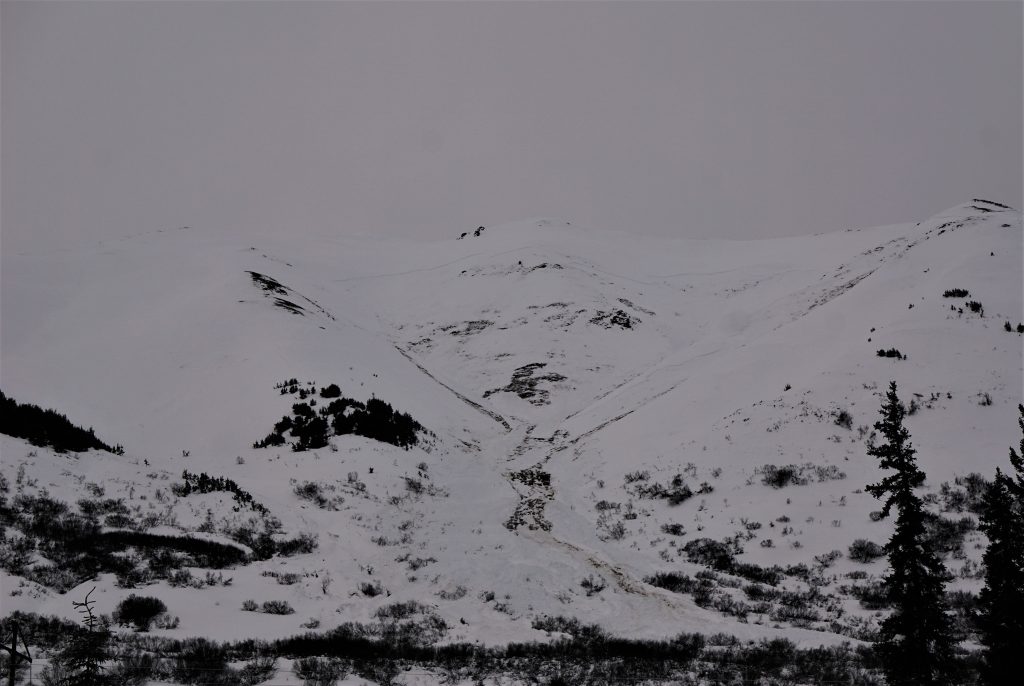 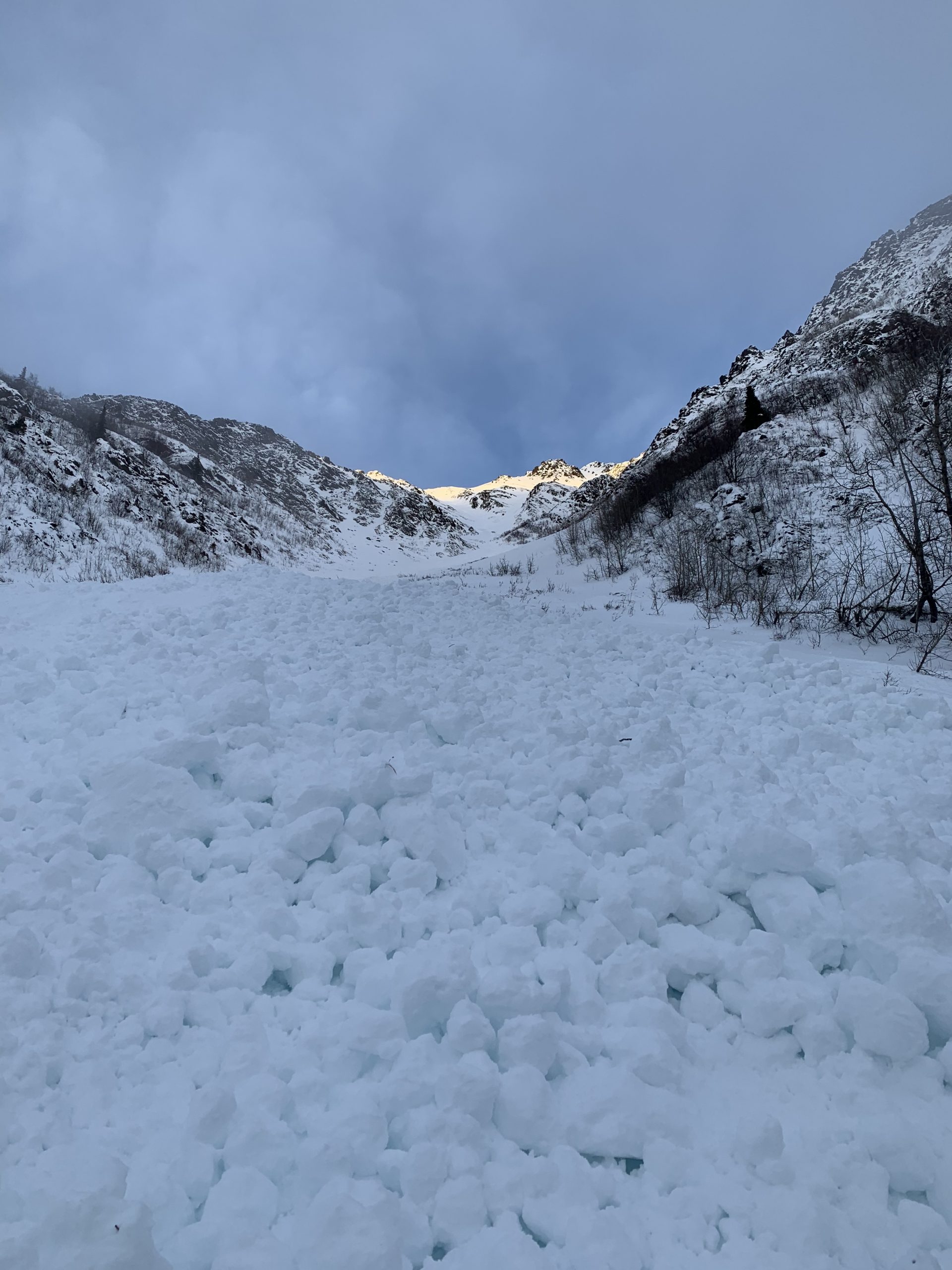 Natural wet avalanche that released on Sunday when a skier was lower on the snow. Skier was able to get out of the way after being washed over by a first wave of snow. Photo by skier, 12.26.21.

Well… it looks like one more day of this wild warm weather before things start to cool off tomorrow. The warmest temperatures have been at the upper elevations (30-40F) for two days now. This has melted the surface and formed a thin wet (or crusty) layer capping the snowpack from valley bottoms to ridgetops. Temperatures have cooled overnight under clear(ish) skies, but with continued warm ambient air along with clouds forecast this afternoon with some light rain, the surface crusts should soften through the day.

This dramatic warm up has not produced any avalanche activity that we know of in Turnagain Pass or areas that have a thick snowpack (around 6′ or more). But… it has been able to affect the shallow snowpack areas, which mostly lie just outside the forecast zone (i.e. Summit Lake). These are the areas to be most suspect of until the pack freezes up. As we can see in Andrew’s report from Fresno, the first day of the warm up (Sunday), which coincided with strong westerly winds, produced some significant avalanche activity that broke in weak layers only buried around 2′ deep.

Things to think about for today are:

The faceted layers that sit above the Halloween crust are still there of course, as shown in the pit from Seattle Ridge below. They continue to show signs of being squished and strengthening in those thicker snowpack areas, but we are still looking out for any signs showing otherwise. Right now, all signs point to where those facets are weaker and closer to the surface, hence the shallow zones. 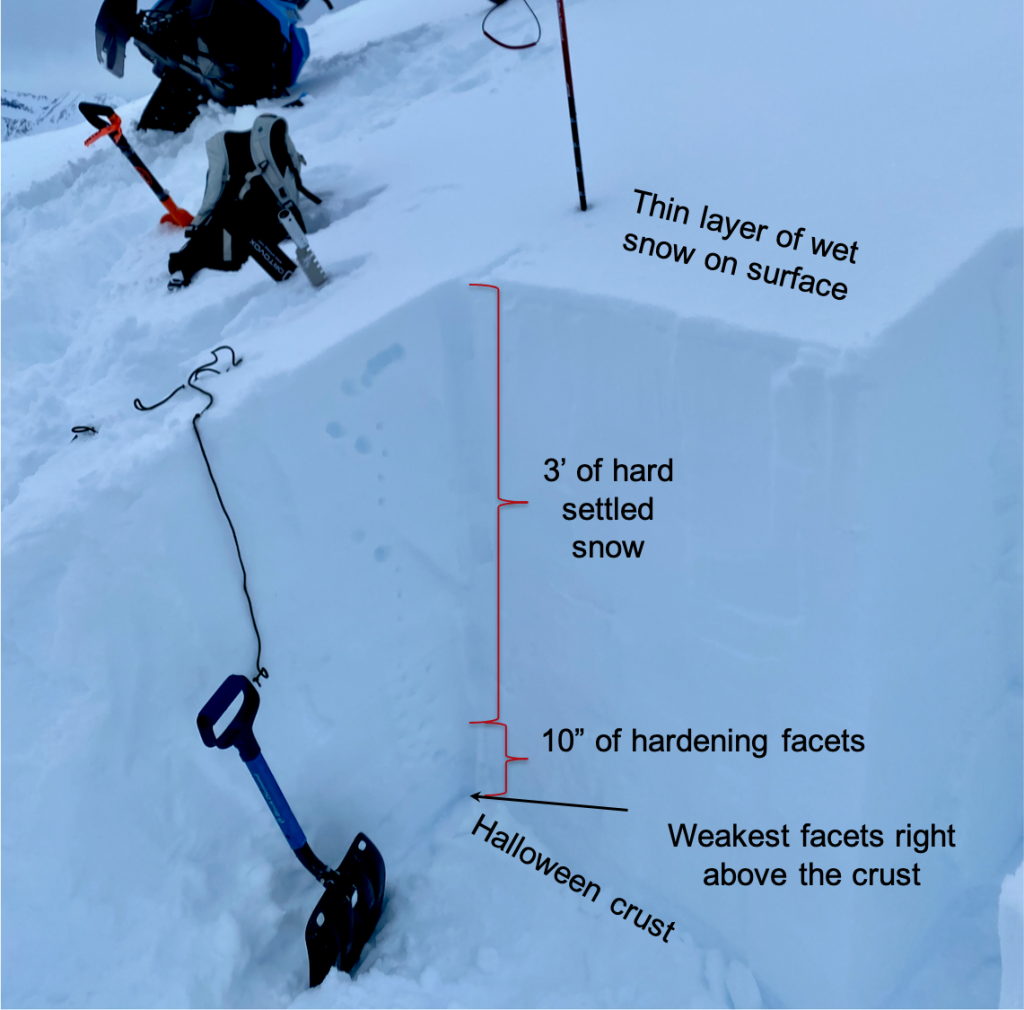 Glide Avalanches:  Some glide cracks are re-opening around the region. Keep your eye out for them. This one below is from Seattle Ridge in Warmup Bowl. 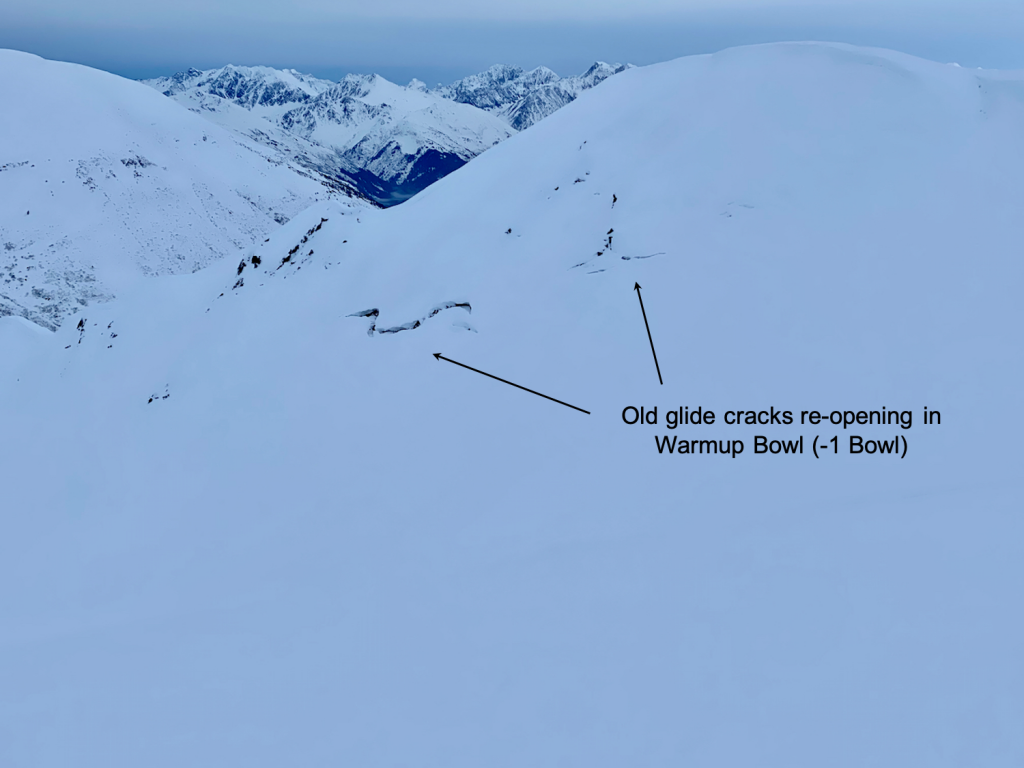 Glide crack on Seattle Ridge’s Warmup Bowl that is opening back up. 12.27.21.

Yesterday:  Mostly cloudy skies were over the region. Temperatures were very warm, in the upper 30’sF along ridgelines and near 32F in valley bottoms. Ridgetop winds were generally from the NW in the 5-10mph with gusts into the 30’s at times.

Today:  Mostly clear skies with valley fog is expected to start the day. Later this afternoon, clouds are forecast to fill in with a chance for a trace to .2″ of rain possible this evening. Temperatures are again inverted this morning with ridgetops in the mid 30’sF and valley bottoms in the 20’sF. Highs today should be in the upper 30’sF at all elevations. Ridgetop winds will be 5-15mph from the west to northwest and increasing some tonight with the rainfall.

Tomorrow:  Finally cooler air begins to filter in early tomorrow morning. Mostly sunny skies are forecast with breezy NW winds. Temperatures should be near 30F at the low elevations and in the 20’sF along the ridgelines.