The avalanche danger is expected to rise to CONSIDERABLE today above 1,000′ with warming temperatures, new snow and strong wind moving in. Wind slabs 1-2′ thick will be likely to trigger on slopes seeing active wind loading. Additionally, human triggered slabs 12-16″ thick are possible on slopes out of the wind and in the trees. Natural avalanches in the Alpine and cornice falls are possible.

*Low elevations: There is a chance an avalanche from above could send debris below 1,000′ and hit summer trails.

There were two skier triggered slab avalanches reported yesterday. One was just south of the forecast area in the Summit Lake zone on Tenderfoot ridge. The slab was triggered by the second person on the slope and in the steeper terrain on the southwest aspect of Tenderfoot. The person was caught and carried an estimated 50 yards, lost a pole and injured their leg. One dog was fully buried and able to pop itself out quickly. The slab was relatively small, 6″ deep and around 20-30′ wide, yet once it released moved very quickly and entrained more loose snow on the descent, which picked up speed and volume. The report can be found HERE.

The second slide was on the east face of Seattle Ridge after dark. This avalanche was thought to be a fresh very soft wind slab from the increase in winds in the afternoon, around 8″ thick. The skier saw the slab fracture and spiderweb then was able to ski to the side, no one was caught. The slide was on or near the Repeat Offender slide path. Details are still coming in.

Additionally, one group on the nothwest end of Tincan found several wind slabs (did not slide) and one large whumpf near treeline. They modified their route after seeing these signs of instability. Their report can be found HERE.

*A big thank you to everyone for taking time to submit these, and all, observations. We are glad everyone is ok and hope the injured skier’s leg heals soon.

A change in weather has arrived. Temperatures have increased, and will continue to increase today through tomorrow. Additional snowfall is headed our way- 4-8″ today followed by 5-10″ tonight. And lastly, winds are on the rise and should blow 20-40mph with gusts over 60mph along ridgelines. What this all means is a rise in avalanche danger.

Wind slabs will be the most likely avalanche to encounter through the day and storm slabs could begin to form with warm temperatures and additional snowfall. With plenty of light snow on the surface available to be transported, wind slabs are likely to be found near ridgelines and in cross-loaded gullies; even without new snow. They may also be found in other places winds are/or have been loading slopes, including exposed areas in the treeline band. Watch for wind patterns and feel for stiffer snow over softer snow. Look for cracking in the snow around you and whumpfing (collapsing) in the snow. They are all Red Flags you’ve found an unstable slab.

In areas out of the wind, the fluffy light snow many folks have been enjoying is settling and becoming denser with the warming temperatures. This is creating a potential slab avalanche problem not associated with wind. With a known layer of buried surface hoar and older weak snow 12-16″ below the surface, avalanches breaking in these weak layers could produce slabs up to 2′ thick with additional snow.

Cornices:  New sticky warm snow along with wind are likely to build upon the existing cornices. Natural cornice falls are possible. This is a day to avoid being under them and use very careful travel techniques along ridgelines. 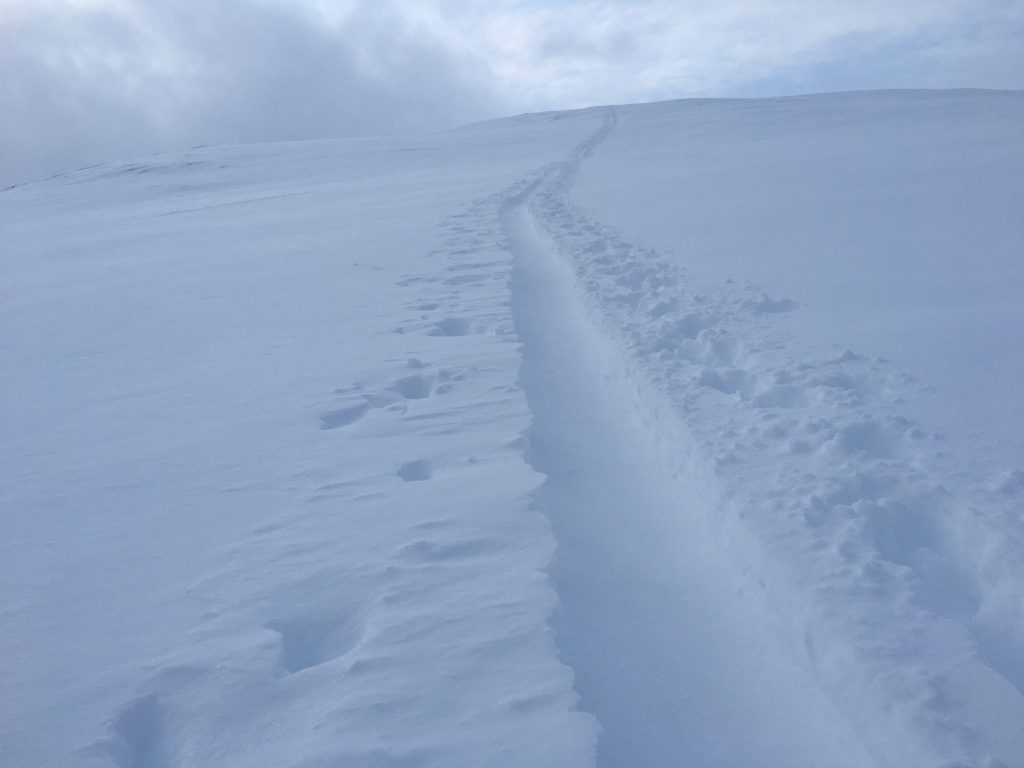 It has been almost two weeks since the last glide avalanche was reported and over a week since we’ve seen cracks actively opening. With all the new snow and winds, many cracks are now obscured and it’s a difficult task to assess their movement. That said, keep your eyes out for any brown cracks and if you see one, limit your time under it.

Yesterday:  Partly cloudy to overcast skies were over the region. Light snow showers in the evening have added a trace to 2″ snow to sea level. Ridgetop winds were light and westerly until around 2pm when they switched around to the east and increased into the moderate range (10-20mph) with stronger gusts. Winds have been steadily blowing overnight. Temperatures have risen dramatically due to the approaching low-pressure and sit in the mid teens along ridgetops, 20-25F near 1,500′ and in the teens again at sea level.

Today:  Stormy weather with rising temperatures is on tap. Snow should start falling later this morning, adding 4-8″ of light to medium density snow by this evening. Overnight another 5-10″ could fall. Snow is forecast to turn to rain below 500′ tonight. Ridgetop winds will continue from the east 20-40mph with stronger gusts. Temperatures look to rise to the mid 3o’sF at sea level tonight and into the mid 20’sF along ridgelines.

Tomorrow:  Warm air will continue to stream in and could bump up the snow line as high as 1,000′. Snowfall tomorrow looks to taper off by late morning before another front moves in Monday night. Stay tuned, this is a very active weather pattern we are in!

*Winds around 4pm yesterday look to have blown the rime off the wind sensor. The temperature is estimated from using the current temperature readings (the hourly temperature data isn’t displaying and we are working on this).