The avalanche danger is CONSIDERABLE for all elevations. Yesterday hurricane force winds, combined with feet of new snow at mid and upper elevations and inches of rain at sea level, overloaded the snowpack. Today large, dangerous, human triggered storm slab avalanches are likely on slopes over 30°. We are in the window of the first 24 hours after a significant storm, which means cautious route-finding and conservative decision-making are essential. Give cornices a wide berth, avoid hard hollow sounding snow and look for signs of instability.

SUMMIT LAKE: The snowpack in the Summit Lake area is thinner and weaker. Despite less snow falling there yesterday, the new snow and strong winds may have overloaded buried weak layers as well as formed touchy wind and storm slabs and cornices. Glide avalanches occurred in this zone on Monday. Keep an eye out for more and steer clear of glide cracks.

It’s a day to carefully evaluate terrain and consequences if an avalanche does release. We need to give the mountains time to adjust to the rapid loading. Low angle slopes without steep slopes above are great ways to enjoy the new snow without worry. Yesterday’s powerful storm brought feet of snow to the mid and upper elevation terrain, inches of rain to sea level and multiple hours of sustained winds at ridgetops blowing 60-90 mph (with gusts as high as 129 mph on Maxs and 133 mph on Sunburst). The rain/snow line rose to around 1,000′ and then dropped back to close sea level overnight. Not surprisingly there was a widespread avalanche cycle observed from the highway.

Today’s partly cloudy skies may allow for easier travel above treeline and with that, the danger that a person could trigger a large avalanche if venturing into avalanche terrain. Two to three feet of new snow has fallen in the mountains. There are a variety of storm snow related issues to pay attention to and view as likely today starting with wind slabs. Very strong winds can have unusual loading patterns. Sometimes wind slabs are farther down onto slopes than expected and terrain channeling of the wind can significantly cross-load terrain features. In sheltered areas (if were any) storm slabs may be present as heavy warm snow fell on light colder snow. Avoid travel on or under cornices as they may be quite tender today and often break farther back than expected. At low elevations that received heavy rain, wet loose avalanches may still be initiated before the next crust forms.

Red flags to watch for:
–  Recent avalanches, from today or avalanche activity from during the storm?
–  Whumpfing (collapsing) of the snowpack, sure sign to avoid avalanche terrain period.
–  Shooting cracks, likely to be seen near ridgelines and on slopes where the wind has formed wind slabs.

The good news is the new snow should bond relatively quickly. From what we know, the pre-existing snow surface lacked any persistent type of snow grain and was mainly wind slab and settled powder. However as always, the snowpack is guilty until proven innocent and there are always surprises out there – it’s the first day after a storm and we can’t get caught being over confident.

Deep Persistent Slabs:
Above 2,500′ there is a layer of facets (weak snow) at the base of the snowpack, now 5-8′ deep. There is a chance this storm may have brought it back to life in places – meaning the rapid loading of new snow and wind may have overloaded the layer causing it to collapse and initiate very large avalanches to the ground. However, that has yet to be determined and is something we will be looking for as we get eyes on the forecast area and south of it towards Summit Lake. 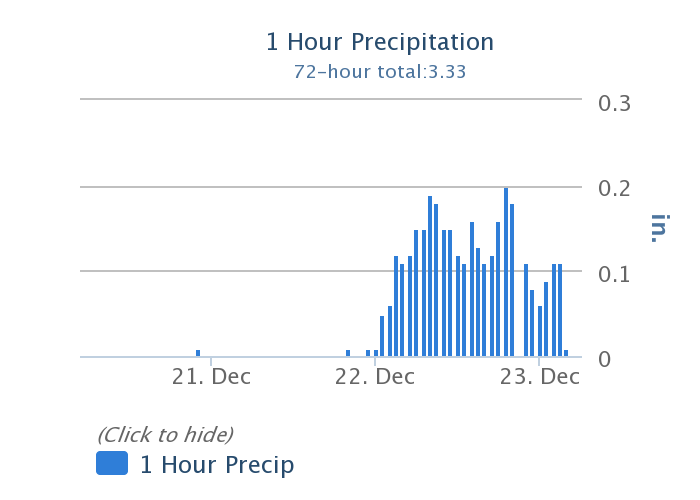 One hour precipitation graph from the base of Alyeska. Courtesy of Mesowest/MADIS. This really illustrates precipitation rate and the rapid loading that was occurring. At mid and upper elevations snowfall was 1-2″ per hour. 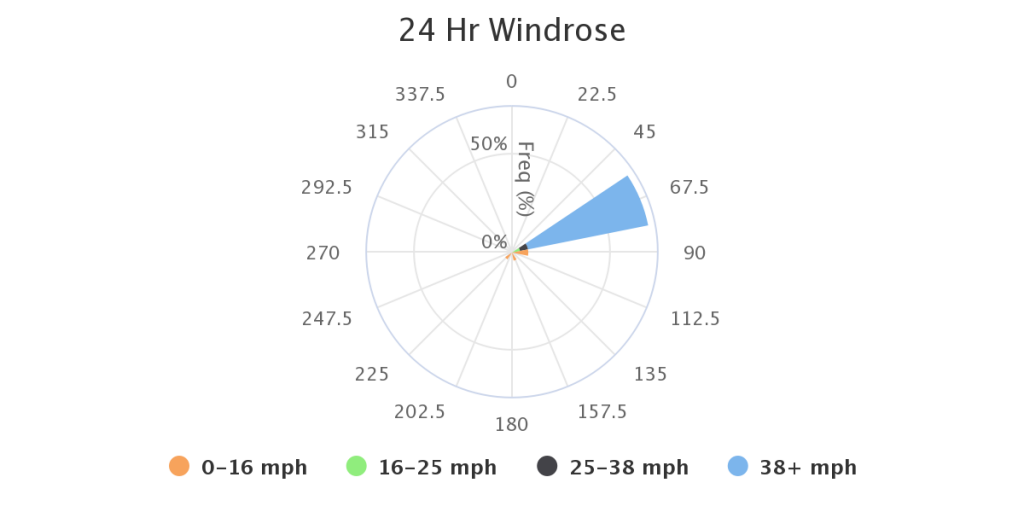 Sunburst wind rose shows the sustained winds from the northeast for the 24 hr time period. The max gust was 133 mph which may be a record. Thankfully the wind sensor did not blow away!

Yesterday: Skies were obscured and heavy and rain and snow fell throughout most of the day with precipitation rates of 1-2″of snow an hr.  Rain/snow line was around 1000′. Winds were easterly and very strong blowing 60-90 mph for close to 12 hrs with peak gusts over 120 mph. Temperatures were in the 20°Fs in the Alpine and the high 30°Fs at sea level. Around 1 am winds and precipitation eased off. Overnight temperatures were in the mid 20°Fs to mid 30°Fs. The storm ended with light snow falling to close to sea level.

Tomorrow:   Mostly cloudy skies with snow showers and east winds 10 to 15 mph increasing to 20 to 25 mph in the afternoon. Winds could gust as high as 40 mph. Temperatures will be in the mid 20°Fs to mid 30°Fs. Looking ahead there is sunshine on tap for Christmas Day.

*Alyeska Mid – precipitation gauge blew away. Numbers extrapolated from Alyeska Base.
RIDGETOP 24-hour data (6am – 6am)