The avalanche danger is MODERATE above 1000′. Human triggered wind slabs 1-5′ deep are possible on slopes steeper than 30°. The snowpack still needs time to adjust to the rapid loading that occurred during the storm on Tuesday. In addition watch for changing conditions as winds bump up again today. Evaluate snow and terrain carefully. Give cornices a wide berth, avoid hard wind affected snow on steep slopes and look for signs of instability.

Below 1000′ where a new melt-freeze crust exists the avalanche danger is LOW.

SUMMIT LAKE: The snowpack in the Summit Lake area is thinner and weaker. In addition to the wind slab issue there is still a chance of triggering a slab that breaks in a buried weak layer mid-pack or near the ground.

Recent Avalanches
Avalanche Problem 1
Wind Slabs
Wind Slab avalanches are the release of a cohesive layer of snow (a slab) formed by the wind. Wind typically transports snow from the upwind sides of terrain features and deposits snow on the downwind side. Wind slabs are often smooth and rounded and sometimes sound hollow, and can range from soft to hard. Wind slabs that form over a persistent weak layer (surface hoar, depth hoar, or near-surface facets) may be termed Persistent Slabs or may develop into Persistent Slabs.
Likelihood of Avalanches
Terms such as "unlikely", "likely", and "certain" are used to define the scale, with the chance of triggering or observing avalanches increasing as we move up the scale. For our purposes, "Unlikely" means that few avalanches could be triggered in avalanche terrain and natural avalanches are not expected. "Certain" means that humans will be able to trigger avalanches on many slopes, and natural avalanches are expected.
Size of Avalanches
Avalanche size is defined by the largest potential avalanche, or expected range of sizes related to the problem in question. Assigned size is a qualitative estimate based on the destructive classification system and requires specialists to estimate the harm avalanches may cause to hypothetical objects located in the avalanche track (AAA 2016, CAA 2014). Under this schema, "Small" avalanches are not large enough to bury humans and are relatively harmless unless they carry people over cliffs or through trees or rocks. Moving up the scale, avalanches become "Large" enough to bury, injure, or kill people. "Very Large" avalanches may bury or destroy vehicles or houses, and "Historic" avalanches are massive events capable of altering the landscape.

Triggering a large dangerous avalanche like the one yesterday in -1 /Warmup Bowl is still very possible today and remember it might not be the first person out on the slope that triggers the avalanche. Tracks are not necessarily a sign of stability. Steep slopes that were wind-loaded during the storm require extra caution, especially unsupported ones. Yesterday the wind effect from the hurricane force winds was notable and variable depending on terrain orientation. When the storm eased off early Wednesday morning there was a window of snow falling without wind. This set-up may be a bit misleading with the terrain that was wind affected having soft surface snow. It could be easy to get well out onto a slope and actually be on a hard wind slab, just covered by a bit of soft snow and have the slab fail. This is often a characteristic of this avalanche problem. As mentioned yesterday very strong winds can have unusual loading patterns with wind slabs forming lower off of ridgelines and significant cross-loading. These lurking wind slabs could be anywhere from 2-5′ deep, possibly even deeper. In addition, the winds are forecast to increase today and with snow available for transport new shallow, 6″-1′ wind slabs could form.  Watch for blowing snow. Pay attention to how far you sink in on your skis, board or machine. Are you actually traveling on hard snow under a little soft snow. Prior to this storm there were a few different surfaces including old wind affected snow, soft settled powder and exposed melt-freeze crust. Part of the current issue after the storm is how well the new snow bonds to the old surfaces.  Observers found that the interface between the new snow and old snow to be reactive yesterday in wind affected terrain. Below 2500′ we are also still tracking the December 1st rain crust under the December snow.

If you venture out today be sure to look for signs of instability and choose terrain wisely.

Red flags to watch for:
–  Recent avalanches.
–  Whumpfing (collapsing) of the snowpack, sure sign to avoid avalanche terrain period.
–  Shooting cracks, likely to be seen near ridgelines and on slopes where the wind has formed wind slabs. 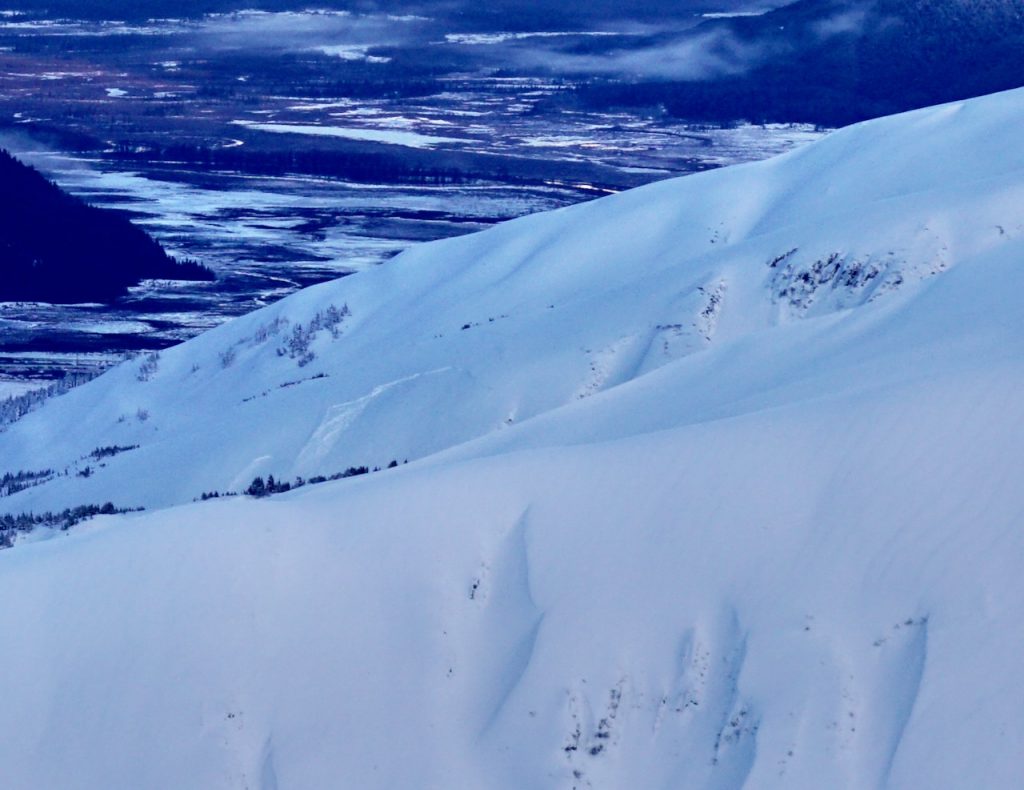 This crown on Wolverine observed yesterday is in steep wind-loaded terrain. This is the type of terrain that you could trigger an avalanche today. Photo taken from Tincan. 12.23.20 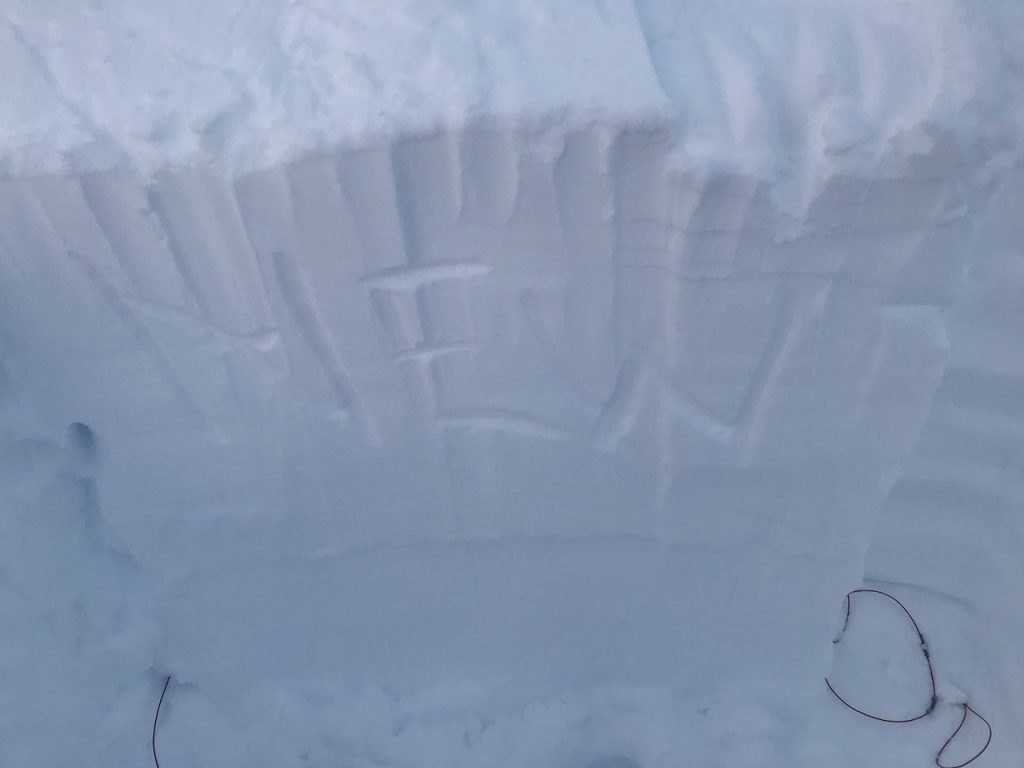 We did not see evidence of avalanches breaking down to the buried facets at the base of the snowpack above 2500′ during this storm cycle. As this point this really is just a concern south of the forecast area in Summit Lake where the overall snowpack is much thinner. Even in this zone observers have noted this to be generally unlikely as the facets have shown less and less reactivity over time and are starting to round.

Yesterday: Yesterday skies varied from scattered clouds to mostly cloudy. Winds were light and easterly and temperatures were in the high teens and low 20°Fs at upper elevations and high 20°Fs to mid 30°Fs at low elevations. There were a few very light flurries in the late afternoon. Overnight skies were partly cloudy, winds remained light and temperatures were in the 20°Fs.
Today: Skies are forecast to mostly cloudy with light snow and rain showers and rain/snow line at 900′. Temperatures will be in the 20°Fs to mid 30°Fs depending on elevation. Winds will be easterly 10-20 mph with gusts into the 30s and 40s. Overnight skies will be mostly cloudy with light showers continuing before starting to clear early Christmas morning. Temperatures will be in the 20°Fs and winds will remain gusty until around midnight and then decrease by morning.

Tomorrow: Mostly sunny skies with light east winds and temperatures in the 20°Fs and 30°Fs. The clouds look to roll back in during the evening as the next weather system moves into the area for the weekend.