The avalanche danger remains MODERATE on all aspects above 1,000′. There still exists the chance for a person to trigger a large slab that breaks in old weak layers anywhere from 2-5+’ deep. This type of large slab avalanche could be triggered from below, the side, or on top of a slope. Additionally, a few inches of new snow with moderate south winds today may just be enough to form small new wind slabs in the higher elevations.

Below 1,000, the danger is LOW where triggering an avalanche in unlikely.

*Roof Avalanches: There is a lot of frozen snow and ice hanging on roofs in Girdwood. Warming temperatures later today may be enough to weaken some of the snow/ice and cause it to fall. As always, watch the roofs around you and pay attention to children and pets.

Although there is weather headed in for Anchorage and Hatcher Pass, our forecast region isn’t in the bull’s eye this time. It’s looking like Girdwood and Turnagain Pass could see snowfall totals of 4-6″ by early tomorrow morning. Around 2-4″ of that falling during today’s 5 hours and 33 minutes of daytime hours (one minute longer than tomorrow’s shortest day of the year).

Accompanying the snowfall will be southwest winds in the 10-20mph range. With not a whole lot of new snow to work with and varying degrees of older existing snow available for transport, new wind slabs will have a tough time forming. However, if snowfall and/or wind increases more than forecast, that could change things, something to keep an eye out for. How much snow has fallen? Is it being transported by the winds?

What we really can’t forget about is what is hiding down in the snowpack, under multiple layers of settled storm snow, which are those old faceted layers we keep harping on. We are finding the facets everywhere above ~1,000′. Although the depths they are buried vary greatly; from 6′ to 2′ deep (plus or minus…). They are on the deeper side in Girdwood/Placer Valley/north end of Turnagain and shallower the more south one goes into the interior Kenai (Summit Lake). They last produced avalanches during the storm on Dec 9-10 and most of these avalanches were in the 1,500′ to 3,000′ elevation band. This is the same elevation band where the Halloween crust sits under the facets. It is this band that continues to be the most concerning for someone to trigger one of these slabs.

A few inches of new snow and warming temperatures today will be adding some stress to the snowpack. But, it is not likely enough to change the fact these large slabs will continue to be stubborn to trigger. That said, outside of the forecast zone in Summit Lake yesterday where the weak layer was only buried 18″ deep, a group got a very large collapse in the facets. This is a big red flag and reinforces our travel advise of still playing it safe. Triggering one of these slabs could be very large, propagate across terrain features and simply have too high of high consequences. 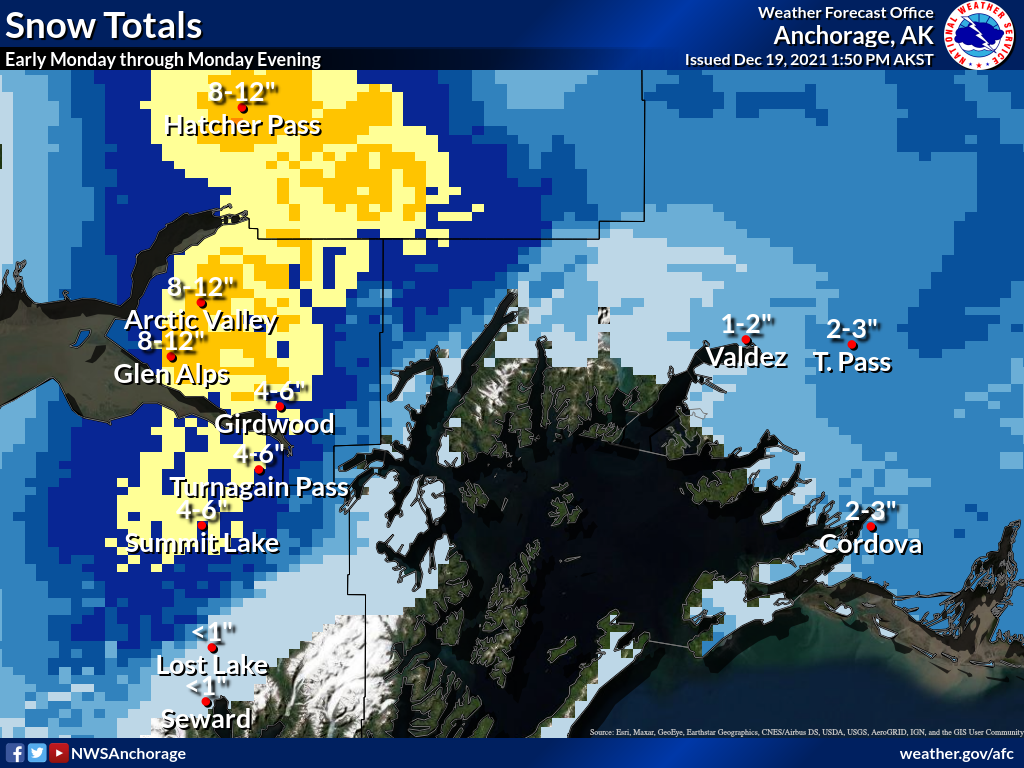 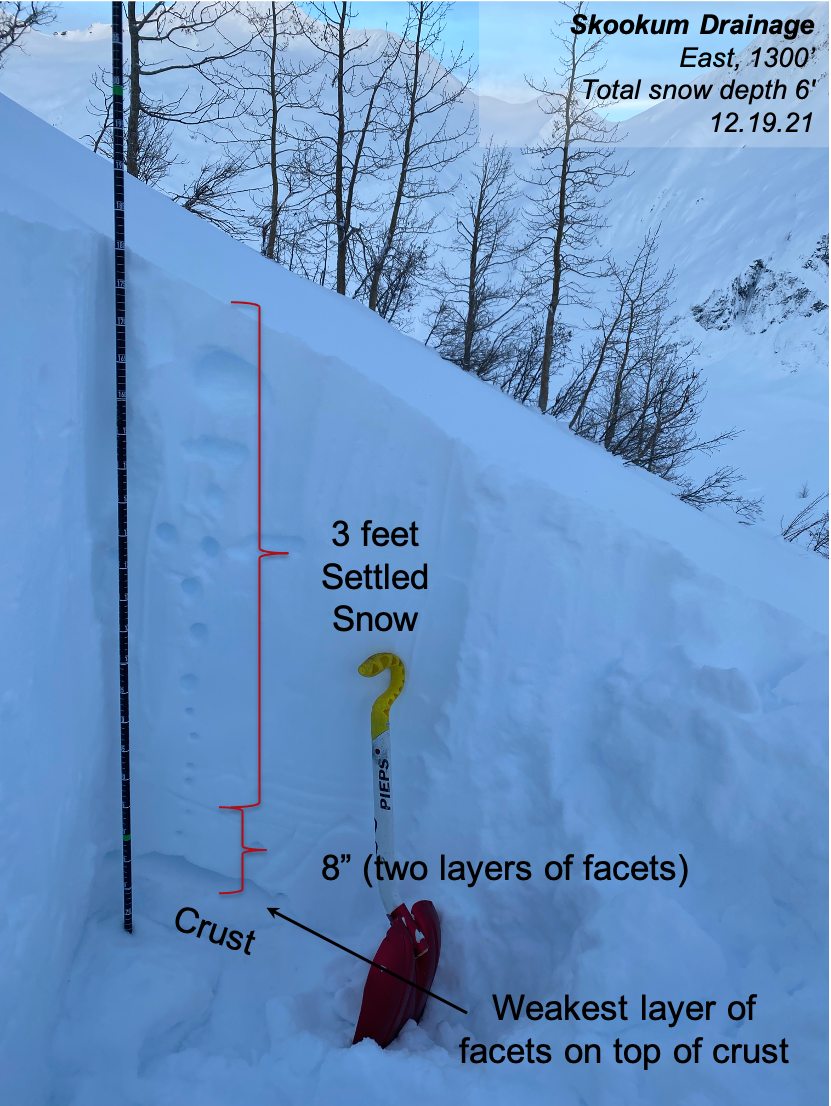 A cross-section of the snowpack at lower elevations (1,300′) where many folks are riding in the Placer/Skookum area. This pit shows the poor structure of the snowpack and the faceted layer that failed with a lot of force.

Glide Avalanches:
The last known glide avalanche was sometime in the past week in the Lynx Creek drainage. There have also been some glide cracks creeping open in Lynx Creek as well as in the Summit Lake area. Glide avalanches are destructive and unpredictable, so as always, limit your time spent traveling below glide cracks.

Yesterday:  Partly cloudy skies with some periods of sunshine were over the region. Ridgetop winds were light from north and west. Temperatures were generally in the 15-25F range from valley bottoms to ridgelines.

Today:  A frontal system is moving through today that will bring warming temperatures and snowfall to much of the region. Between 2-4″ is expected with another 2-4″ overnight tonight. Ridgetop winds should be southwesterly in the 15-20mph range. Temperatures are climbing now and should sit near 32F at sea level and in the mid 20’s at the higher elevations.

Tomorrow:  Skis should clear up tomorrow as a cold northwest wind sets up over the region. These NW winds are looking like they could ramp up to the 30-40mph range along the ridgelines and something we’ll be watching for. Stay tuned.