A MODERATE avalanche danger is expected today in the Alpine (above 2,500′) as 4-6″ of snow with a bump in wind is forecast. Fresh wind slab avalanches, up to a foot thick, should be forming along ridgelines and in cross-loaded gullies. Watch for changing conditions as these wind slabs, although on the smaller side, should be easy to trigger. A LOW danger exists below 2,500′ and in areas that do not see wind effect.

PLACER VALLEY/SKOOKUM:  We have little information on the snowpack in this area. Use extra caution, watch for red flags, and ease into big terrain.

South of Turnagain Pass to SUMMIT LAKE:  A thinner and weaker snowpack exists in these areas. On steep rocky terrain above 2500′, there is still a chance a person could trigger a slab avalanche failing near the ground.

A unique weather system is just moving in this morning that should bring a fairly widespread snowfall event region-wide. In our area of the Eastern Turnagain Arm, between 4-6″ of snow, with more in favored locations, is expected to fall by this evening. Although this isn’t a lot to write home about, the flow direction (northwesterly) is such that we could see some bands of snow produce much more than 6″. As far as new avalanche issues go, the winds are really the game changer. A northwest wind is expected to develop today and blow in the 15-20 mph range by noon(ish) before increasing to the 25mph range tonight. These are prime wind slab development speeds in areas seeing the winds. With not a whole lot of new snow to work with, there is plenty of loose existing surface snow to move around; especially with the flow from the northwest. Hence, watching for the winds and any wind deposited snow will be the key today.

Any new wind slab should be touchy, yet relatively shallow and many could not pose much of a problem. However, watching for those larger slabs up to a foot thick or more is where things could become unmanageable. Stiff snow over softer snow and cracks that shoot out in the snow around you are clues you’ve found a wind slab.

Areas out of the winds in the core of Turnagain Pass may see some shallow sluffs and a generally LOW avalanche danger. If venturing to areas with a thinner snowpack, know there is some funny business at the base of the pack – discussed below. 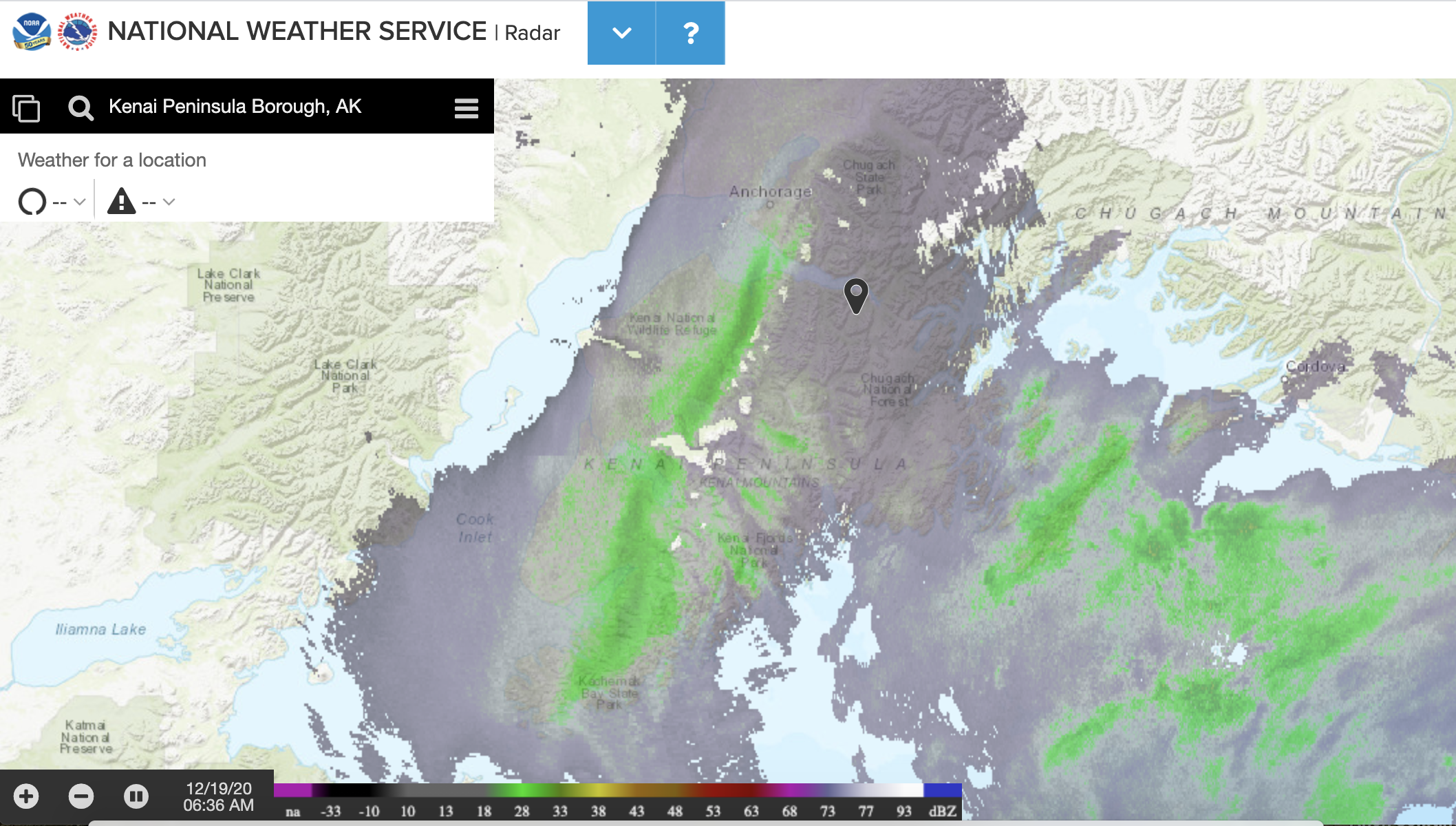 You may have noticed the NWS has a new radar product that has replaced the older radar loops. Green means snowfall, note the bands of snow this morning. It takes a bit of patience to load, but it will be interesting to see how these bands move around today!

In areas with a much shallower snowpack than Turnagain Pass, such as Crow Pass outside of Girdwood and the southern end of Turnagain Pass (Lynx Ck, Silvertip) to Summit Lake, that old faceted snow from October at the bottom of the snowpack remains a concern. This is at elevations above 2500’ where there are no mid-pack crusts and the slab on the facets is composed of very hard snow. Snow pit tests and a lack of avalanche activity on this layer for the past two weeks is pointing to it becoming less and less likely to trigger. However, it is still a tricky problem as this structure can produce a dangerous avalanche if someone hits just the wrong thin spot. This is becoming more of an outlier situation, but something we can’t quite forget about, especially in shallow regions. If choosing to totally avoid this situation, simply keep slope angles less than 35 degrees.

Yesterday:  Most cloudy skies with a bit of clearing were over the region yesterday (no precip). Ridgetop winds were westerly in the 5-10mph during the day before shifting back easterly overnight and picked up into the 10-15mph range. Temperatures were generally in the teens yesterday at the mid and upper elevations and warmed overnight, approaching 20F along ridgelines this morning.

Today:  A low-pressure system in the eastern Gulf is sending moisture over us from first an easterly direction then a northerly direction of all things later today. This unusual pattern is what will bring snow to such a large part of Southcentral. We can expect anywhere between 4-6″ of snow at mid-elevations and even this same amount for the central Kenai and Summit lake zone. Temperatures should remain in the 20’sF at most elevations bring this low density snow to sea level. Ridgetop winds that are 5-15mph from the east this morning should wrap around to the northwest and increase this evening to the 15-25mph range.

Tomorrow:  A brief break in weather is expected tomorrow before a strong bearing low is headed in Sunday night/Monday bringing  a warm and wet storm. Although no precipitation is expected, the northwest winds look like they could persist in the 20-25mph range into Sunday evening. Stay tuned – active weather is headed out way!

*Seattle Ridge anemometer (wind sensor) is rimed over and unable to spin.