The avalanche danger remains MODERATE in the Alpine, above 2,500′. Watch for shallow new wind slabs that may have formed in yesterday’s slight bump in ridgetop winds. Additionally, on steep slopes with an overall thin snow cover, or a thin spot in the snowpack, there is still a chance a person could trigger a large avalanche breaking near the ground.

The avalanche danger is LOW at elevations below 2500’.

PLACER VALLEY/SKOOKUM: This zone has just opened to snowmachine use. Be aware that the snowpack is untested and extra caution is advised. Ease into big terrain, look for signs of instability and have escape routes planned.

SUMMIT LAKE: A thinner and weaker snowpack exists in this area. On steep rocky terrain above 2500′, there is still a chance a person could trigger a slab avalanche failing near the ground.

The mountains received a few inches of new snow yesterday, just enough to begin hiding some of the old tracks. Along with this, ridgetop winds bumped up slightly midday for a period, averaging in the 10-20mph from the east. This may have moved a little snow around along the ridgetops and a few shallow wind slabs could be found in exposed areas today. These are likely to be small and in the 6-8″ thick range at most. This is a ‘Normal Caution’ avalanche issue to look for, along with remembering to give cornices a wide berth and watching our sluff on steep sustained slopes.

What isn’t a Normal Caution avalanche issue is our Deep Persistent Slab avalanche concern. As recently as yesterday, we are still getting snowpit results pointing to the weak October snow near the ground failing. Granted, it’s taking a lot of force to fail, and it’s not failing in many areas, which are all good signs that this problem is slowly going away…. But, if a person or snowmachine hits just the wrong spot, it is not out of the question that a large dangerous avalanche could be triggered. The most concerning areas are: (1) steep slopes with an overall thinner snowpack, such as the south end of Turnagain Pass, Johnson Pass, Lynx Cr, Silvertip and in Summit Lake, and (2) a thin spot in the slab in steep rocky terrain and on unsupported slopes. If choosing to travel in this type of terrain, extra caution is recommended; know there could be a weak layer under you, expose only one person at a time, have your partners keep a close eye on you and have escape routes planned. 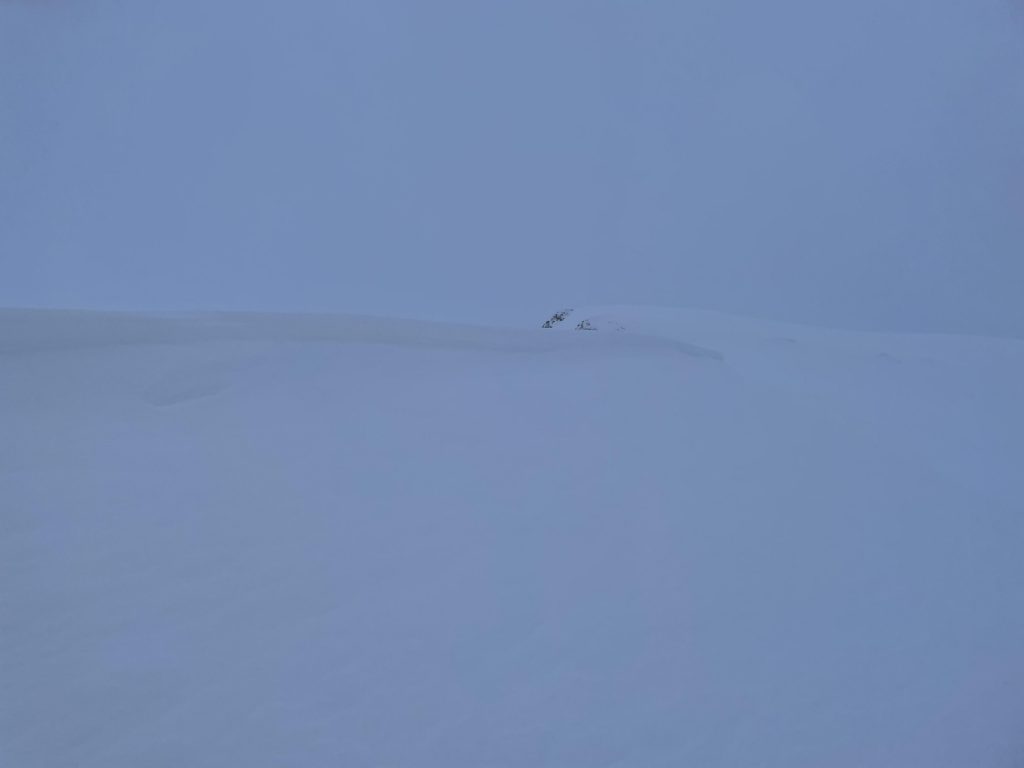 A classic ‘gray-bird’ Alaskan day yesterday. This photo shows some wind effect along the top of Manitoba Pk in the Summit Lake area. 12.17.20. Caleb Rauch.

Yesterday:  Overcast skies with light snow flurries were over the region. Most locations picked up around 2-3″ of very low density snow. Ridgetop winds increased into the 20’s mph during the day from the east with gusts to 32mph on Sunburst before quieting back down overnight. Temperatures were in the 20’sF at the mid and upper elevations.

Today:  Mostly cloudy skies should remain over the region with a trace of new snow possible. Ridgetop winds have shifted to the northwest this morning and should blow 5-10 mph today before decreasing tonight. Temperatures will stay cool, in the teens along the upper elevations and upper 20’sF at sea level.

Tomorrow:  A Special Weather Statement has been issued by the NWS for snowfall over much of Southcentral tomorrow. Only 3-6″ of snow is forecast from Girdwood to Seward, however it’s anticipated to effect vehicle traffic in many areas. Along with the snow, ridgetop winds should swing back around to the east and be relatively light, 10-20mph. Temperatures will remain cool, in the 20’sF at the lower elevations and teens at the higher elevations.