The avalanche danger is MODERATE at and above Treeline. There remains a chance for triggering a large avalanche 1-3′ thick. The likelihood is decreasing, but our guard should remain up, especially in areas that have seen little traffic. Otherwise, watch for lingering wind slabs in steep rocky terrain, loose snow sluffs and give cornices a wide berth.

SUMMIT LAKE:  In this region the snowpack is only 3-4′ thick and harbors weak layers at the mid and base of the pack. In the higher Alpine elevations, there is still a chance a person could trigger a large avalanche and extra caution is advised.

It’s about to be a very nice sunny Friday out there in the mountains! The snowpack is showing promising signs of general stability, but we are not quite fully confident in some of those weak layers that are hanging out in the snowpack. People are venturing further from the road and into terrain not yet traveled this season. Along with that, there have been many folks out and only a few observations coming in. Does this mean stable snow is being found? I hope so. Let us know what you are seeing out there!

The two layers we are watching are below. If someone does trigger an avalanche in one of these, it is likely to be large and dangerous, hence our caution.

Mid-pack facets:  Under the 2-3′ of snow from last Sunday/Monday sit near surface facets and surface hoar. At elevations below 2,500′ those facets sit on a crust. From what we know, this layer has stabilized in the heart of Turnagain Pass and even possibly in the Girdwood area, but other areas on the periphery are still a question.

Basal facets:  At the base of the pack are those October facets we keep talking about. These have not caused a reported avalanche for a week now. The last known slides failing on this layer were on Tincan last Thursday and Silvertip last Saturday. Although this layer is unlikely to trigger, it is still worth keeping in the back of our minds, especially in shallow snow cover areas such as the south end of Turnagain Pass and Summit Lake.

What can we do about this uncertainty if we want to head to big and steep terrain today? We can watch for signs of instability. We can also know those signs may not exist and an avalanche could be lurking. We can watch our partners closely from true safe zones, expose one at a time and have escape routes planned.

Besides the questions above, there are the Normal Caution avalanche issues consistent with a LOW danger. These are keeping a lookout for those old wind slabs that could pop out on you in steep complex terrain, watching your sluff on long sustained steep slopes and traveling well away from a cornices‘s edge. 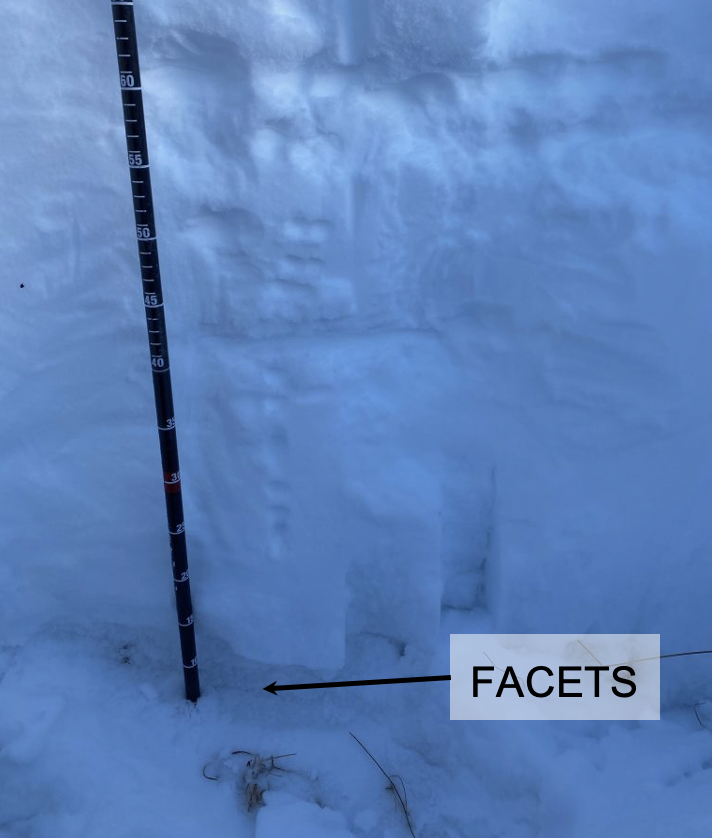 Snowpack in the Summit Lake area – to the south of our advisory area. The snowpack here was around 3′ deep and at 2,500′. You can clearly see those basal facets at the bottom of the pack. 12.9.20.

Yesterday:  Clear skies were over the region. Winds were westerly in the 5mph range along the higher ridgelines. Temperatures were in the teens at the mid and upper elevations and in the 20’sF at lower elevations.

Today:  Another clear sky day in on tap today. Winds will swing around to the east later this morning and blow in the 5-10mph range before increasing to the 20-30mph range tonight into tomorrow. Temperatures will remain winter-like, in the teens in the mountains and the 20’sF at the low elevations.

Tomorrow:  High clouds will start streaming in ahead of a low-pressure system spinning in the Gulf. Winds are forecast to increase into the 30 to even 40mph range through the day ahead of light snow flurries that should start late Saturday night and into Sunday. Only small accumulations are expected Sunday.