The avalanche danger is expected to reach HIGH again today for springtime natural avalanches on steep terrain facing east, south and west. Cloudy skies have limited last night’s freeze and not only are natural large wet avalanches expected today with daytime warming, but human triggered wet avalanches will be likely on slopes with wet saturated snow. Additionally, watch for glide cracks that may release and cornices that may break easier with these warm conditions.

WEDNESDAY AVALANCHE OUTLOOK: There will be no avalanche forecast issued tomorrow, the next forecast will be Thursday, April 22nd. Mostly clear skies are expected to allow the snowpack to freeze Tuesday night and limit avalanche hazard early Wednesday morning. Once the sun melts the surface crusts, expected avalanche danger to rise back to HIGH tomorrow; similar to what we have seen the past several days.

CNFAIC End Of Season Operations:  Daily avalanche forecasts have ended as our forecast season and funding winds down. We will forecast today, Thur, Sat, and Sun this week.

Widespread natural wet loose and wet slab avalanches have been seen over the past 4 days (video below). With cloudy skies yesterday and limited observations, we only know of a few new confirmed natural avalanches, these were mostly seen in the Summit Lake area. There have been a few slabs releasing on northerly aspects as well. One in Girdwood Valley that released on a northerly aspect late Sunday and another in Summit Lake, north of Manitoba.

As for human triggered avalanches, a snowboarder triggered a wet sluff on the backside of Seattle Ridge on Sunday (photo below). They were caught when trying to evade their sluff and described the experience this way: “pushed me down the face like a bulldozer”. Later the rider said it was not a good feeling being pushed by so much weight and ‘no joke’. 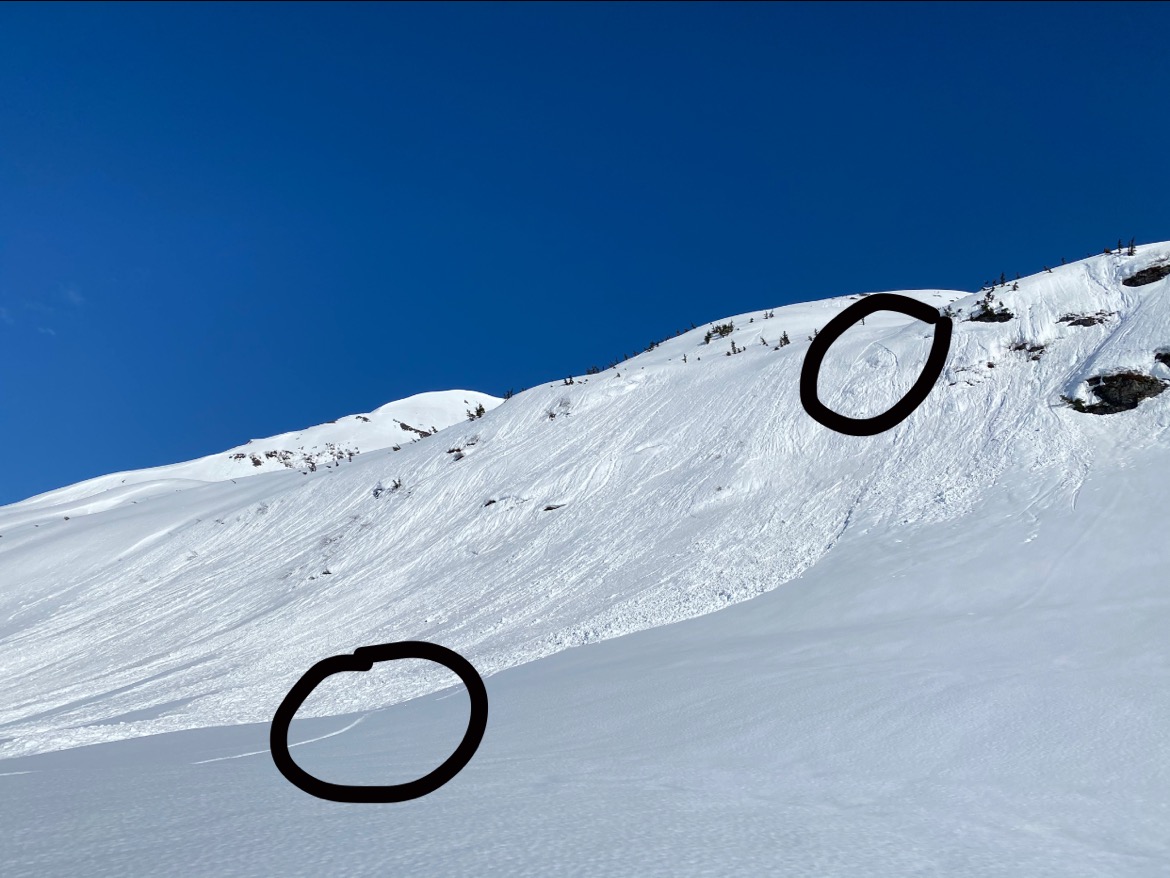 Snowboarder triggered wet loose on the backside of Seattle Ridge. Circles mark where the rider triggered the sluff and where they ended up at the toe of the debris. 4.18.21. Will Morrison. (Thanks Will for sharing!) 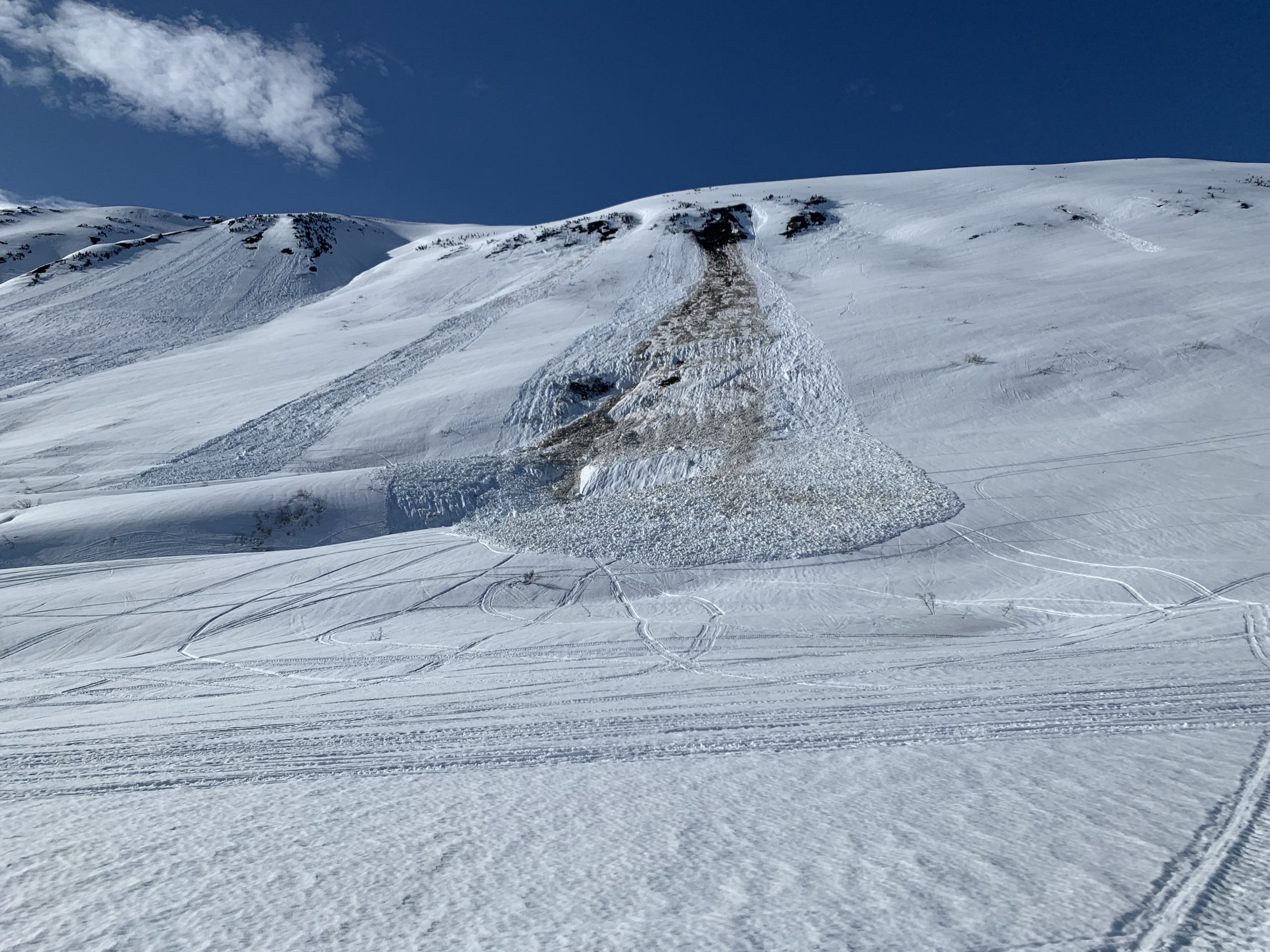 Glide avalanche that released on Sunday midday, just 300 yards to the south from the motorized up-track on Seattle Ridge. 4.18.21. Brent Byrne.

Avalanche Problem 1
Spring Conditions
Warmth has a tricky effect on snow. On the one hand it speeds up the stabilization of the snowpack (reduces the chance of slab avalanches). But a SUDDEN rise of temperature increases the chance of slab avalanches considerably. When this warm period is followed by cooling down, then the chance of slab avalanches reduces. Even more so: the more often the temperature changes, the more stable the snowpack becomes when looking at slab avalanches. Once the temperature becomes too warm we have to deal with wet snow avalanches.
Likelihood of Avalanches
Terms such as "unlikely", "likely", and "certain" are used to define the scale, with the chance of triggering or observing avalanches increasing as we move up the scale. For our purposes, "Unlikely" means that few avalanches could be triggered in avalanche terrain and natural avalanches are not expected. "Certain" means that humans will be able to trigger avalanches on many slopes, and natural avalanches are expected.
Size of Avalanches
Avalanche size is defined by the largest potential avalanche, or expected range of sizes related to the problem in question. Assigned size is a qualitative estimate based on the destructive classification system and requires specialists to estimate the harm avalanches may cause to hypothetical objects located in the avalanche track (AAA 2016, CAA 2014). Under this schema, "Small" avalanches are not large enough to bury humans and are relatively harmless unless they carry people over cliffs or through trees or rocks. Moving up the scale, avalanches become "Large" enough to bury, injure, or kill people. "Very Large" avalanches may bury or destroy vehicles or houses, and "Historic" avalanches are massive events capable of altering the landscape.

The springtime transition continues with more natural avalanche activity expected today. After three days of intense sunshine and warm temperatures at all elevations, clouds moved in yesterday with strong east winds and a trace of rain to 2,000-3,000′. That front is headed out today and some sunshine should start making its way back in by the afternoon. Last night’s refreeze is likely to be slim to none with the cloud cover. It should not take much solar input today, even with some cloud cover, to melt any crusts and continue the wet avalanche cycle we’ve been seeing.

Aspect: Most of the natural avalanche activity has been on east, south, and west aspects due to the direct sunshine. However, there have been a few reports of slabs releasing on north aspects. With those reports, coupled with cloudy skies last night warming all aspects, and early morning and late evening sun hitting northerly terrain, we need to be aware that some north aspects could start losing their strength and begin to avalanche.

Steering clear of slopes with wet, mushy and saturated snow and being out from under any overhead hazards are key. As you can see in the video, steep rocky terrain is shedding its snow easily and it’s not a time to be under this type of terrain or any cornices for that matter. Cornices are peeling away and even a small chunk that falls could initiate a large avalanche. Steep slopes we’d like to ride or ski should be avoided when the surface snow is ‘punchy’ with several inches to a foot or more of wet saturated snow. Triggering a wet sluff can be easier than might be thought and very difficult to escape from. Triggering a wet slab is likely as well, and much more destructive. We have seen many small wet loose avalanches initiate wet slabs and this pattern should continue.

Timing is everything: After today, we should start back into a springtime melt/freeze cycle. This is good news for those interested in corn snow conditions. As skies clear back up we can expect wet surface snow to freeze at night and melt during the day. Avalanche danger will follow this pattern: lower danger in the early morning when the snow is frozen, higher danger as the snow melts and loses its strength during the day.

Avalanche Problem 2
Persistent Slabs
Persistent Slab avalanches are the release of a cohesive layer of snow (a slab) in the middle to upper snowpack, when the bond to an underlying persistent weak layer breaks. Persistent layers include: surface hoar, depth hoar, near-surface facets, or faceted snow. Persistent weak layers can continue to produce avalanches for days, weeks or even months, making them especially dangerous and tricky. As additional snow and wind events build a thicker slab on top of the persistent weak layer, this avalanche problem may develop into a Deep Persistent Slab.
Likelihood of Avalanches
Terms such as "unlikely", "likely", and "certain" are used to define the scale, with the chance of triggering or observing avalanches increasing as we move up the scale. For our purposes, "Unlikely" means that few avalanches could be triggered in avalanche terrain and natural avalanches are not expected. "Certain" means that humans will be able to trigger avalanches on many slopes, and natural avalanches are expected.
Size of Avalanches
Avalanche size is defined by the largest potential avalanche, or expected range of sizes related to the problem in question. Assigned size is a qualitative estimate based on the destructive classification system and requires specialists to estimate the harm avalanches may cause to hypothetical objects located in the avalanche track (AAA 2016, CAA 2014). Under this schema, "Small" avalanches are not large enough to bury humans and are relatively harmless unless they carry people over cliffs or through trees or rocks. Moving up the scale, avalanches become "Large" enough to bury, injure, or kill people. "Very Large" avalanches may bury or destroy vehicles or houses, and "Historic" avalanches are massive events capable of altering the landscape.

On upper elevation north aspects that have mostly dry snow, we are concerned that a person could trigger a dry slab avalanche in the 2-3′ deep range. Even if the top inch or two of snow is moist or wet, there can still be dry snow issues below this. There are old weak layers from March and possibly there could be weak snow under last week’s storm snow. Looking for signs of instability and assessing the snowpack before committing to steep north aspects with little or no sun effect will be prudent.

Glide cracks are popping… Several glide avalanches were reported and seen through the region from Girdwood to Seward over the past three days. As with the concerns stated above, avoiding being under overhead hazards includes glide cracks. Keep you eye out for them as several cracks are opening up each day. There are a few on Seattle Ridge we have our eye on. 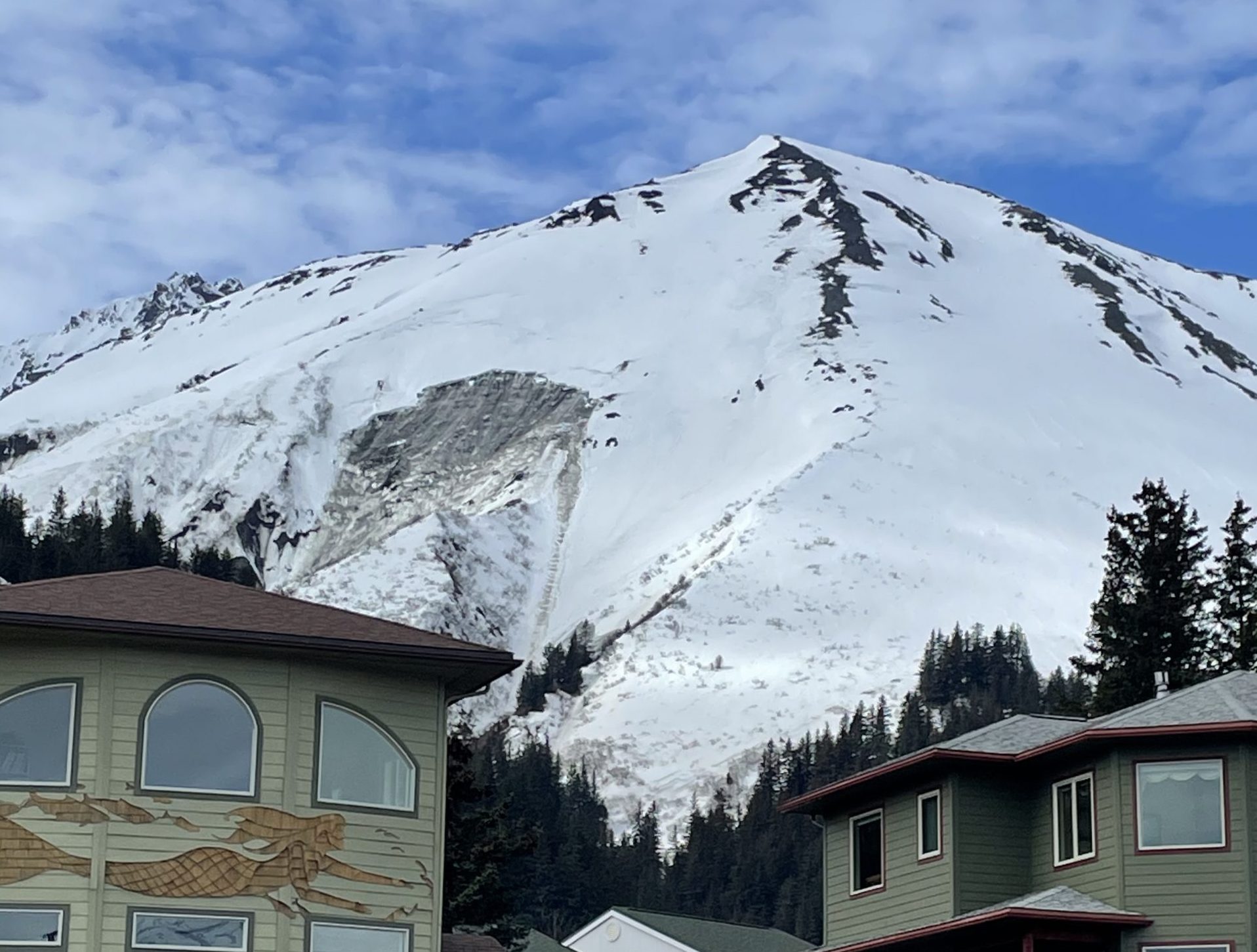 Yesterday:  Mostly clear skies transitioned to mostly cloudy by the late afternoon as a front moved in from the south with slightly cooler air and strong east winds. A trace of light rain fell to between 2,000 and 3,000′. Ridgetop winds blew in the 30-50mph range with gusts to 70mph in the evening. Ridgetop temperatures were in the 40’sF while 1,000′ temps were in the 50’sF.

Today:  Partly cloudy skies are over the region this morning, which has kept valley bottom temperatures in the 40’sF. As the front moves north, we should see lingering clouds through the day with some areas seeing the sun. Although the Sunburst weather station has dipped to the low 30’sF for first time since Friday morning, daytime temperatures should climb to the low 50’sF at 1,000′ and near 40F along ridgelines. Ridgetop winds are decreasing and should be in the 5-15mph range from the east.

Tomorrow:  Sunny and warm with a light east breeze. Temperatures should reach the low/mid 50’s at 1,000′ and ~40-45F along ridgelines with lows near 30F. Easterly ridgetop winds look to be 5-10mph. From the National Weather Service’s forecast discussion: