The avalanche danger is MODERATE on all aspects above 2,500′. It remains possible a person could trigger an avalanche 1-2′ deep on a weak layer of buried surface hoar at the upper elevations. Additionally, watch for lingering wind slabs up to a foot deep that formed Sunday. The danger is LOW below 2,500′, where triggering an avalanche is unlikely.

*Avalanche danger is expected to rise tomorrow due to a warm storm system moving in tonight. Increasing easterly ridgetop winds and up to a foot of snow above 1,000′ is expected by tomorrow evening.

For anyone trying to squeak out a backcountry outing before this next series of storms heads in tonight, there are still some avalanche concerns in the upper elevations to look out for. The main one will be triggering an avalanche that breaks 1-2′ deep on a layer of buried surface hoar. This is our current persistent slab avalanche problem.

This layer of buried surface hoar caused a couple of near misses on Friday and Saturday. It is a tricky layer to find as it doesn’t exist everywhere; even hand pits or regular pits don’t always give us all the clues. We have also seen it release on fairly low angle slopes (around 30 deg). With time on our side and the spotty nature of the layer in general, triggering this type of avalanche is becoming harder. But that doesn’t mean we can forget about it. If choosing to head into terrain over 30 degrees in the Alpine, especially the northerlies where the snow is softer and lacking sun crusts, consider the consequences if a slab releases. Watch closely for red flags (cracking in the snow around you and collapsing/whumpfing). Also, be sure to keep with safe travel protocol (expose only one person at a time, have an escape route planned, watch your partners closely). Remember, this type of avalanche can break after several people have been on a slope, as was seen a few days ago in the near misses mentioned above.

Lingering Wind Slabs:  A bump in easterly wind on Sunday was able to form shallow wind slabs in the upper elevations. These were up to a foot deep at most and becoming stubborn yesterday. That said, watch for wind loaded pockets on steep slopes. Even a small wind slab can be dangerous in steep rocky terrain. 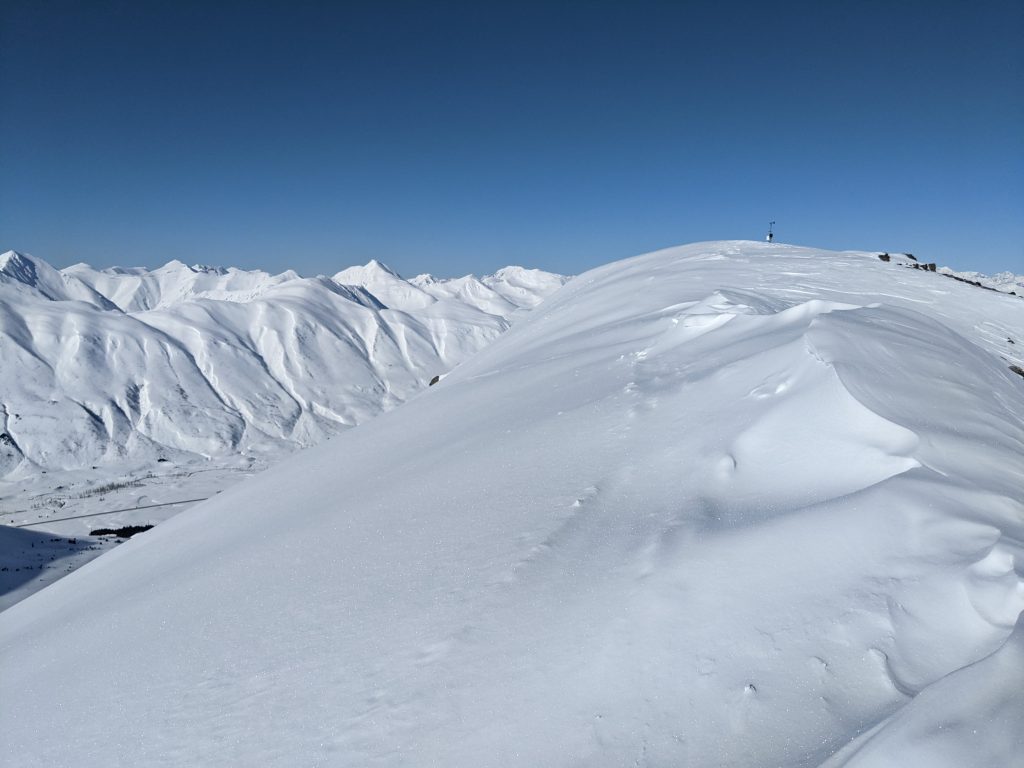 A bit of wind effect along the Sunburst ridge yesterday. A surprise 1-3″ of snow late Sunday afternoon at Turnagain Pass made for improving turning conditions!

Glide Avalanches:  New glide cracks are starting to pop out more and more. This is in addition to those we’ve been watching for some time that are staring to slowly open. Although we have not seen any of these release into an avalanche yet, they are completely unpredictable and can fail at anytime. As always, it’s a great idea to limit any exposure under glide cracks.

With clouds forecast to move in later today, solar warming should be limited and wet loose avalanches are not likely to occur. Cornices are always a normal caution hazard, but the weather today should not make them any more unstable – tomorrow will be another story however. 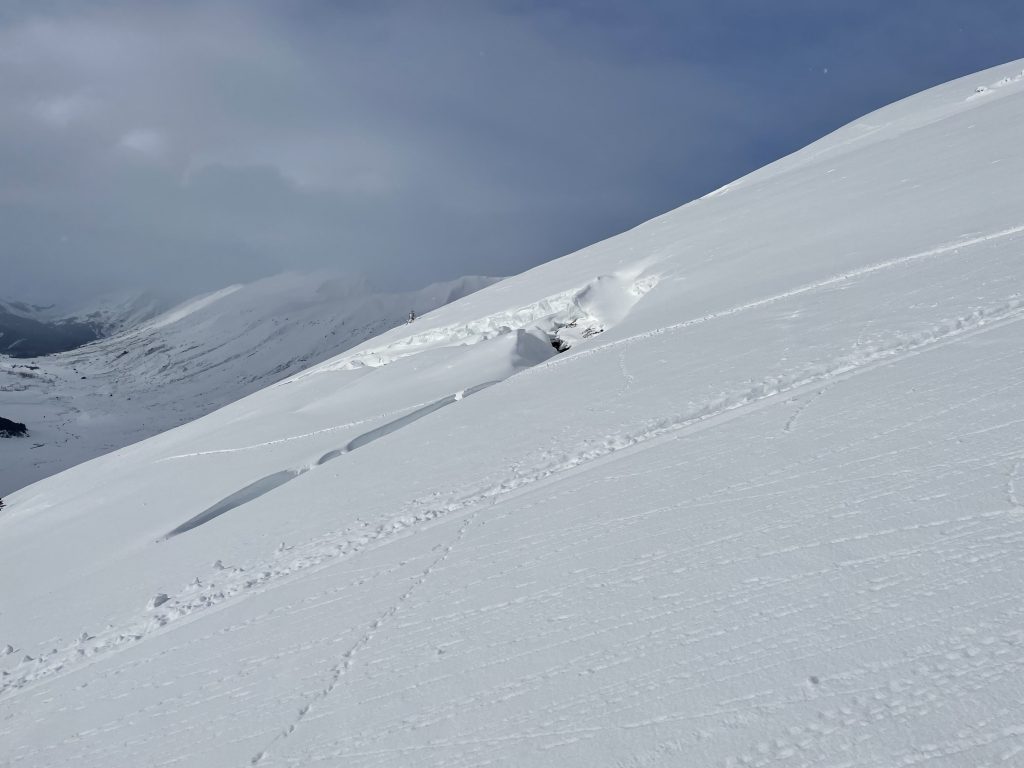 Glide crack on the SE face of Seattle Ridge that we have been watching for some time. It sits just to the south of the motorized up-track at the top of the Repeat Offender slide path. It looks to be slowly opening and whether or not it will release, only time will tell. Photo: Troy Tempel 3.13.22.

Yesterday:  Mostly sunny skies were over the region with some valley fog near Turnagain Arm yesterday. Ridgetop winds were light and variable. Temperatures climbed to near 30F with daytime warming and have dropped into the teens to single digits in valley bottoms overnight.

Today:  Mostly clear skies above the valley fog this morning will give way to clouds by this afternoon as the next storm system moves in tonight. Ridgetop winds will be light from the east till sunset when they should climb into the 10-20mph range. Temperatures are chilly in valley bottoms this morning (5-15F) but should warm into the mid 20’sF during the day. Snowfall should begin tonight with 3-5″ falling by tomorrow morning to sea level.

Tomorrow:  Heavy snow, strong ridgetop easterly winds and warming temperatures are expected tomorrow. The rain/snow line looks to reach 1,000′ by midday tomorrow. Right now we are expecting around 6-10″ of snow through the day on top of the 3-5″ expected tonight. Stay tuned on tomorrow’s forecast!

*The sunburst weather station has lost power, we are working to get it back online as soon as possible.