HIGH avalanche danger remains in the mountains surrounding Turnagain Pass, Girdwood Valley, and Portage Valley. Dangerous avalanche conditions are expected on all slopes 30 degrees and steeper – including runout zones. Avalanches are expected to release naturally, be easily triggered by people and send debris to valley floors. Travel in avalanche terrain is NOT recommended. Areas with steep slopes above should be avoided – an avalanche from above could run much further than expected.

SUMMIT LAKE (& INTERIOR EASTERN KENAI MTS) – An unprecedented amount of snow has fallen in areas of the interior mountains of the Easter Kenai including Summit Lake, Cooper Landing, and Moose Pass!!! This area has a poor snowpack structure and large to very large humans triggered avalanches are very likely today. Travel in avalanche terrain is NOT recommended.

There will be intermittent traffic delays today on Portage Glacier Highway for avalanche hazard reduction work Near Mile Post 3 and Bear Valley. Motorists should expect delays of up to 45 minutes between 9:30 AM 12:00 Noon. Updates will be posted on the 511 system. http://511.alaska.gov/

In the past two days our region has seen a large amount of snowfall in short period of time and more snow is expected today and into the weekend. Strong storm force winds have also been a big factor and yesterday numerous large and very large natural avalanches were observed across the region. We urge backcountry users to avoid avalanche terrain -slopes steeper than 30 degree and all runout zones. Today’s weather is variable across the region with Turnagain Pass expecting 6-12” of new snow and Girdwood and Portage Valley 1-3 ft. In addition strong ridgetop winds will continue to actively load leeward slopes throughout the day. Expect Easterly winds to range from 30-40 mph increasing into the 60s mph this evening. Temperatures have remained above freezing at sea level. Expect rain/snow line around ~1000 ft. Wet avalanches are likely below treeline in Portage Valley and summer trails with avalanche terrain above should be avoided like Byron Trail.

***Today periods of broken skies and partial clearing are a possibility the further you get from the coast. If the sun makes an appearance solar radiation will also be adding stress to the snowpack. This is an additional reason to not get lured into avalanche terrain – even if the skiing/riding conditions are tempting to do so.

These snow totals are resting on 2-3 ft of storm snow from last weekend that covered up weak faceted snow and buried surface hoar. Not only is this a recent storm snow an issue, but triggering a deeper instability 3-5+ ft deep is also a serious concern. To compound this situation an active weather pattern will continue for Eastern Turnagain Arm tonight and into the weekend with another powerful storm expected Saturday evening. This means dangerous avalanche conditions will continue through the weekend.

Johnson Pass, Summit Lake and further South 2-3 ft of snow fell in very short period of time (roughly 12 hours) producing numerous large avalanches running full path length. Summit Lake and areas in the interior Kenai Peninsula have a very poor snow structure with variety of old weak layers (facets and buried surface hoar) in the mid and base of the snowpack. Not as much precipitation is expected in this zone today, BUT strong winds will continue to load slopes. Very large natural avalanches are possible and human triggered avalanches are very likely. Expect similar conditions throughout the interior Eastern Kenai Mountain region all the way to Seward. 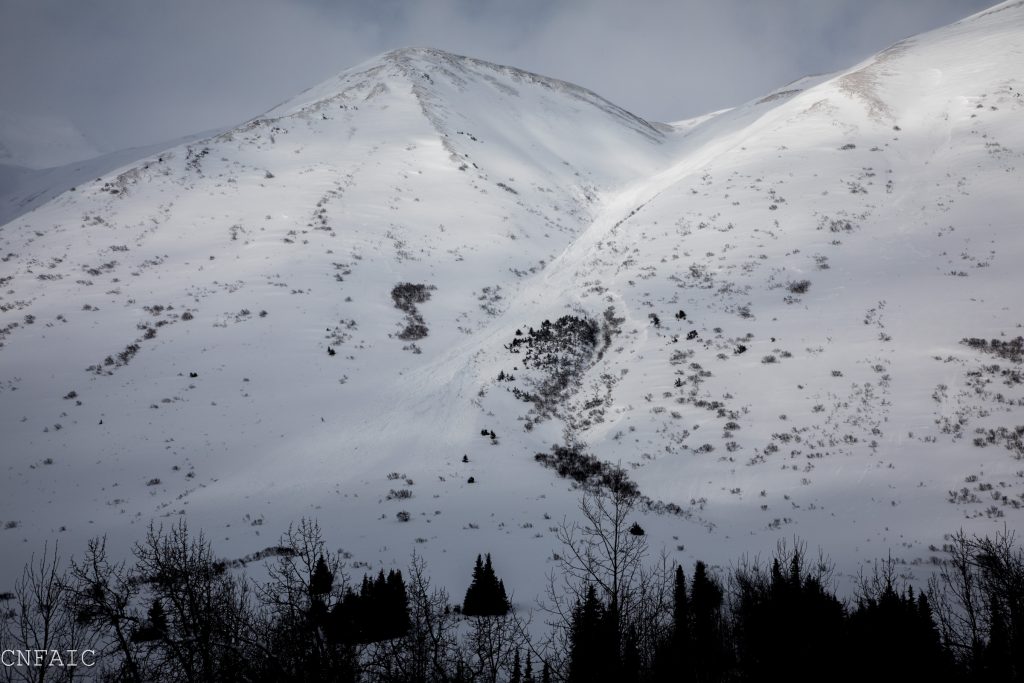 A large natural avalanche near Bertha Cr on the South end of Seattle Ridge, SE aspect. Photo take yesterday afternoon during a brief window of visibility. 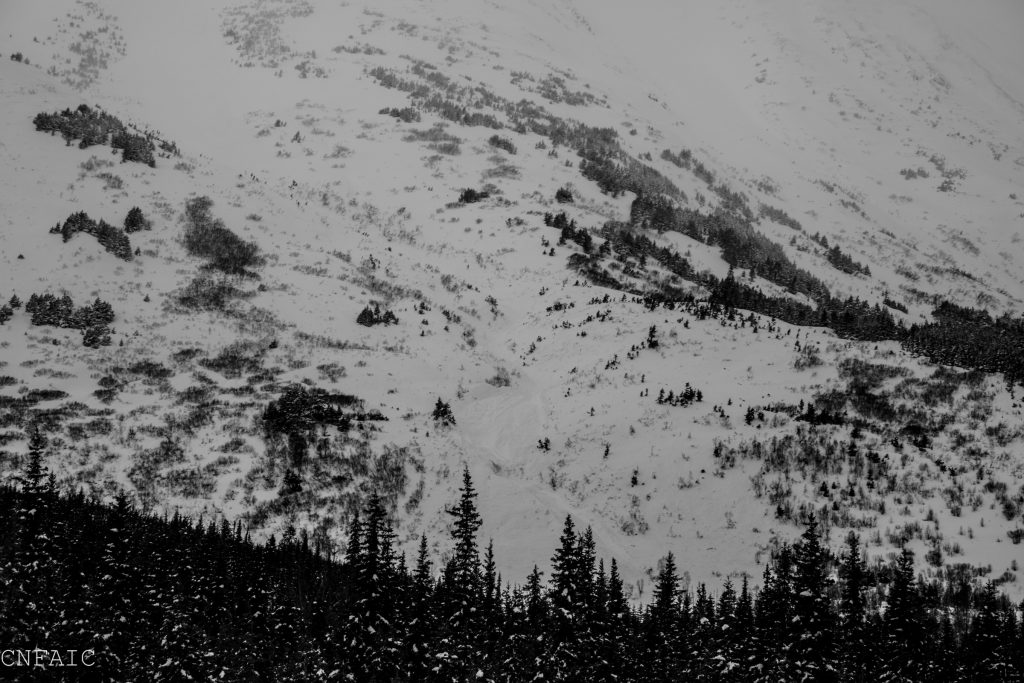 Avalanche debris at the bottom of an East aspect on Twin Peaks running to valley bottom.

Yesterday: A brief window of broken skies occurred early afternoon, but skies were mostly obscured. A mix of rain and snow was observed below 700′. Precipitation increased later in the day and snow totals ranged from 5-15 € across the region. See precip totals below. Strong Easterly ridgetop winds ranged from 20-40mph with gusts in the 70s mph. Temperatures at sea level were in the mid 30s F and at ridgetops were in the low to mid-20s F.

Today: A mix of rain and snow will continue throughout the day. In the upper elevations 6-12 inches is possible (0.4-1.0 in SWE) in Turnagain Pass, and 1-2 ft of new snow (.75-2.0″ SWE)  is expected in Girdwood and higher amounts in Portage Valley. Rain/snow line may reach 1000 ft or higher mid-day. Strong Easterly ridgetop winds 30-40mph will continue today bumping into the 50-60’s by this evening. Temperatures could reach a high of 40F at sea level, but should remain in the mid to upper 20s F at ridgetops.

Tomorrow: Another powerful storm is expected tomorrow evening along with storm force winds and warmer temps. Expect heavy rain in the lower elevations and heavy snow in the alpine. Rain/snow line may push into the mid elevations as high as 1500′ – 2000′. This storm is expected to favor coastal regions, and uncertainty remains about how much precip will fall further inland.

*Seattle Ridge weather station is not reporting reliable wind data at this time. 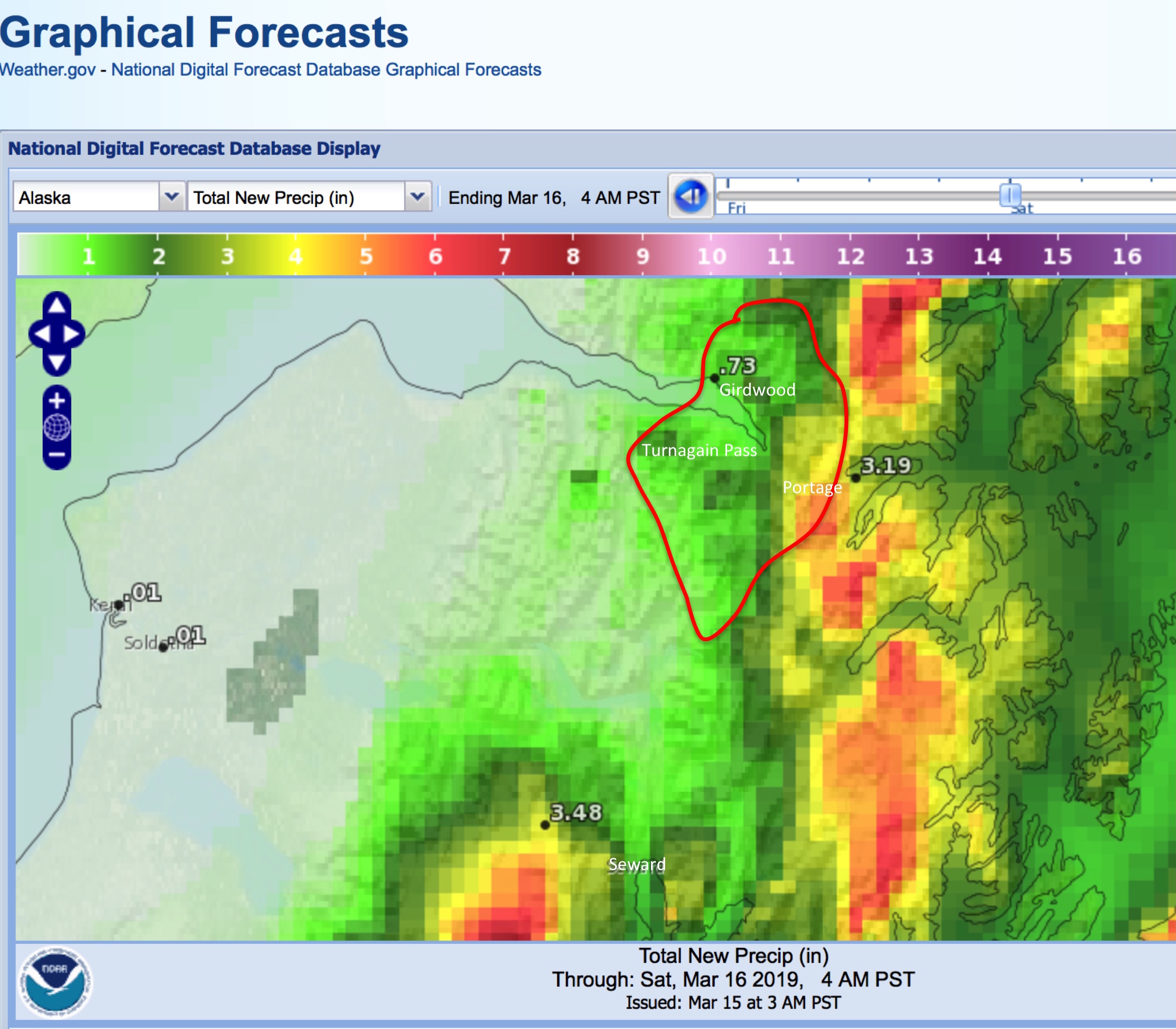 Red outline is the Turnagain zone forecast region. Precip totals refer to water weight (inches of precip) from 3am Friday – 4am Saturday morning. Note the variability of precip across the region.