A BACKCOUNTRY AVALANCHE WARNING has been issued through the National Weather Service for the Turnagain Pass area and surrounding mountains.

Heavy snowfall and strong winds have created a HIGH avalanche danger in the mountains surrounding Turnagain Pass, Girdwood Valley, Portage Valley, and areas on the Kenai including Summit Lake and the Seward zone. Dangerous avalanche conditions are expected on all slopes 30 degrees and steeper – including runout zones. Avalanches are expected to release naturally, be easily triggered by people and send debris to valley floors. Travel in avalanche terrain is NOT recommended. Areas with steep slopes above should be avoided, such as the Byron Glacier Trail and the Seattle Ridge Uptrack. Even small terrain features could act as deadly traps.

Today’s message is simple. Stay out of the mountains and avoid all avalanche terrain. Over the last 24 hours Turnagain pass has received 30 inches of new snow (2.4 inches SWE.) Alyeska mid way station in Girdwood has seen 19 inches. We expect similar if not more snow in the upper elevations of Portage Valley and the mountain surrounding Seward. Strong Easterly winds 40-60 mph occurred overnight and today’s winds will remain strong, 25-45 mph throughout the day. Another 6-12 inches of new snow is expected and another storm is on the horizon tomorrow, Friday. This afternoon winds will shift to the South bringing in warmer air and rain/snow line may increase to 1500 ft.

In the upper elevations expect large to very large dry avalanches to release naturally. Slab avalanches are expected to be 2-5+ feet deep and run long distances. In the lower elevations below 1000 ft, where rain is falling, wet avalanches are expected. The only way to manage this avalanche hazard is to stay well away from any avalanche terrain, slopes steeper than 30 degree and all runout zones. This includes giving Seattle Ridge plenty of space in the flats, as well avoiding any trails that go under avalanche terrain where it may be raining, like Bryon Glacier trail or the Bird to Gird Bike Path.

An active weather pattern will continue for Eastern Turnagain Arm tomorrow and into the weekend with several more storms headed this direction. The avalanche danger is expected to remain HIGH until this pattern changes and precipitation and winds back off.

South of Turnagain in Summit Lake where a variety of old weak layers (facets and buried surface hoar) sit in the mid and base of the snowpack, today’s rapid loading event is expected to cause natural avalanches. Although less snow has fallen than Turnagain, 1-2 feet of new snow is enough to tip the balance, not to mention strong winds. Expect natural avalanche activity throughout our entire Eastern Kenai Mountain region all the way to Seward. 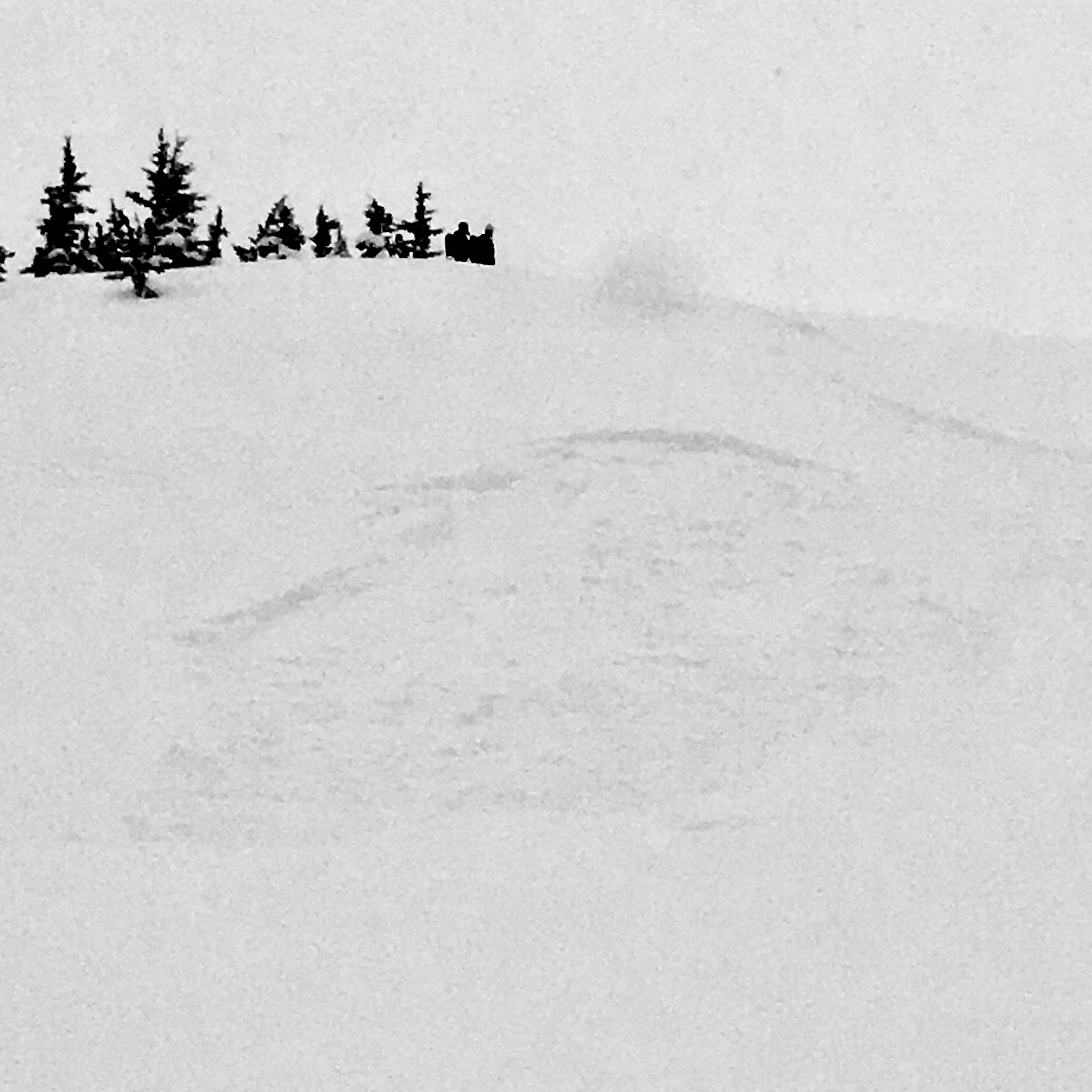 Photo taken yesterday in the Tincan trees with only 8″ of new snow. Small steep terrain features were releasing easily with the weight of a skier. This snow is releasing on a very slick melt freeze crust below 2500 ft. Now there is 3-4 feet of snow on this same bed surface. Small terrain features could be very dangerous today, even in places we often think of as safe, like Tincan trees. Photo by Andy Moterow.

Yesterday: Snow showers favored Turnagain Pass and intensity increased overnight for total of 30 inches, (2.4 inches SWE) in 24 hours. In Girdwood precip was light most of the day until the evening and 19 inches of snow (1.0 inch of SWE) fell at Alyeska Mid way station. Ridgetop winds from the NE were 20-40mph range and increased in the evening with gusts in the 60-70s mph at Sunburst weather station. Temperature remained just above freezing at sea level overnight and low to mid-20s F near ridgetops. Rain/snow line is estimated around 500 ft overnight.

Today: A mix of rain and snow will continue throughout the day. In the upper elevations 6-12 inches is possible 0.4-0.9 inches rain below 1000 ft. Rain/snow line may reach 1500 ft mid-day. Ridge top winds will shift from the East to the South and decrease to 25-35mph with gusts in the 40s mph. Temperatures should remain in the mid to upper 20s F in the upper elevations.

Tomorrow: Heavy snow and rain is expected tomorrow as another storm tracks into our region. Strong Easterly ridgetop winds will continue throughout the day. Above freezing temperatures are expected in the lower elevations and may push into the mid elevations. Rain/snow line may be around 1500 ft. More storms are expected over the weekend and into next week.

*Seattle Ridge weather station is not reporting reliable wind data and the snow depth sensor at Summit Lake Snotel is not accurate as of 7am.