The avalanche danger will rise to CONSIDERABLE in the Alpine (above 2500′) today. With sustained easterly winds, increasing snowfall and weak surface snow, expect dangerous avalanche conditions to develop if the weather forecast verifies.  Human triggered wind slabs, 1-2′ deep, will be likely in steep wind-loaded terrain, especially on unsupported slopes and in cross-loaded gullies. Natural wind slabs will be possible. Below 2500′ the avalanche danger is MODERATE. Pay attention to what terrain is above you as conditions change. Watch for blowing snow, shooting cracks and recent avalanches. Cautious route-finding and conservative decision-making are essential.

The National Weather Service has updated the  Special Weather Statement  this morning.

East winds increased overnight and a few inches of snow fell. The winds are forecast to remain strong enough to transport snow today and the snow will continue with precipitation intensity peaking in the afternoon. Expect this combination of snow and wind to form sensitive wind slabs on top of weak snow surfaces. During the past week, we have seen near-surface facets and surface hoar develop all the way up to ridgetops. Prior to this storm the weak snow was sitting on top of stiff old wind surfaces and sun crusts, and this has the potential to be very sensitive to triggers now that it is buried.  If the weather forecast verifies and we actually get a foot of snow by this afternoon, human triggered avalanches up to 2′ will be likely in wind-loaded terrain in the Alpine. Natural avalanches may also occur at upper elevations. It is really important to pay attention to changing conditions.

What to watch out for if you’re headed out today:

Remember, expect any wind slab you find to be sitting on weak faceted snow and/or surface hoar and poor bonding is likely. There is also a chance a persistent slab avalanche could be triggered if an avalanche triggered near the surface overloads the older weak layers in the upper 1-3’ of the snowpack and steps down creating a larger avalanche.

Sluffs: Steep slopes that are sheltered from the wind have 2-6” poorly bonded snow on the surface, which makes it easier to trigger dry loose avalanches (sluffs). Be aware of the potential for sluffs to gain volume and speed in steep terrain, since these can be dangerous if they knock you off your feet or your machine. 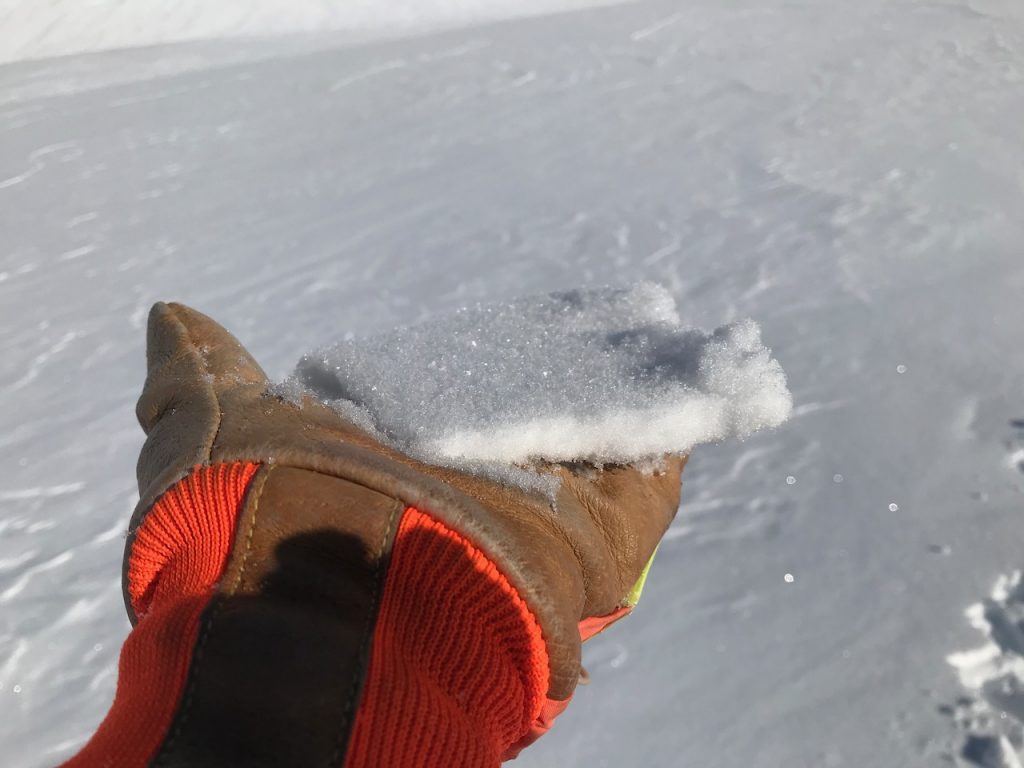 Surface hoar on a wind crust below Kickstep, 3.7.21. Expect slabs forming over this set-up to be sensitive today.

Today: Skies will be cloudy with snow throughout the day, 6-8″ expected. Snowfall is forecast to be heaviest in the late afternoon and continue overnight with an additional, 2-4″. Winds will remain easterly 15-30 mph with gusts into the 40s and 50s. Winds will shift to the northwest in the evening, blowing 15-25 mph with gusts into the 30s. Temperatures will be in the mid 20°Fs to low 30°Fs during the day dropping overnight to the teens and single digits as colder air moves into the region.

Tomorrow: Snow showers showers in the morning tapering off by the afternoon. Temperatures in the teens and low 20°Fs. Winds will remain northwesterly 15-25 mph with gusts into the 30s. Overnight skies become partly cloudy and temperatures dip to around 0°F. Winds ease a bit overnight but remain northwesterly. There is some sunshine in the forecast for Friday into the weekend.