The avalanche danger is CONSIDERABLE above 2500′. New snow and strong winds over the past two days have built sensitive slabs 1-2′ deep or deeper on top of weak surfaces, with a layer of buried surface hoar present throughout most of the advisory area. These storm and wind slabs will remain reactive today despite calm weather. These lingering problems will require cautious terrain use and conservative decision making. As the sun heats up the new snow, natural avalanches will be possible so pay close attention to decreasing stability through the day. The danger is MODERATE between 1000′-2500′, and LOW below 1000′.

PORTAGE/PLACER: These areas received double the snow that was recorded in Girdwood and Turnagain Pass over the past week. Avalanche conditions are very dangerous as a result. Human-triggered avalanches remain very likely today, and extra caution is warranted in these zones.

Turnagain Pass: We triggered a wind slab on a steep west-facing roll at about 1600′ elevation in the Tincan Trees yesterday afternoon. It was on a smaller terrain feature, but the slab was 6-18″ thick, 75′ wide, and ran about 50′. There were some small surface hoar grains on the bed surface.

Looking down from the crown of an avalanche in the Tincan trees yesterday. 03.05.2022

It is looking like the clouds are going to break and winds will die down after four days of stormy weather, but the avalanche danger remains elevated. Heavy snowfall and strong winds have buried a layer of surface hoar 1-2′ deep or deeper, and that setup is likely to remain reactive today. Winds have shifted from easterly to westerly over the past 24 hours, so we can expect to find sensitive wind slabs on all sides of the compass. This has created a challenging setup in the upper snowpack, with potentially two rounds of reactive wind slabs that may be capped by soft snow, making them a little harder to identify. The areas that received more snowfall over the past four days (Portage, Placer, Girdwood) will be more dangerous today. This is especially true for the Squirrel Flats and Skookum areas. The same can be said for upper-elevation start zones near ridgelines, convex rolls, and gullies, which have all seen some kind of wind loading during the storm.

Just to make things a little more interesting, we are expecting to see full sun by mid morning, along with mild temperatures. These new snow instabilities are likely to become more touchy as the snow surface heats up, and there is a chance we could see some natural wet loose avalanches triggering storm and wind slabs by this afternoon.

Long story short, despite the clear weather this is not a ‘game-on’ type of day. We have limited info of avalanche activity during the storm, and what little info we do have is indicating that the layer of buried surface hoar will be a concern. Keep a conservative mindset today, seeking out information from the snowpack before easing out on to steeper slopes. Be on the lookout for red flags like shooting cracks, collapsing, and fresh avalanches. Take the time to hop off your machine or step off the skin track and see how well (or how poorly) the new snow is bonding to the old snow. If you see any concerning signs, stick to low-angle slopes and give the storm snow some more time to settle out.

Deep Persistent Slabs: For the zones with a thinner snowpack around the periphery of our forecast area, this storm has loaded a snowpack with deeper weak layers. This is the case in the Crow Creek, Johnson Pass, Lynx Creek, Silvertip, and Summit Lake areas. It is unlikely, but not impossible, that a person will trigger an avalanche on these deeper layers today. It is still worth keeping this potential for a very large avalanche in mind if you are planning on getting out in any of these zones.

Cornices: Strong winds through last night have added to the already large cornices. These will remain tender today, especially as they heat up later in the day. As always, be sure to give them plenty of space while traveling along ridgelines and limit the amount of time you spend below them. 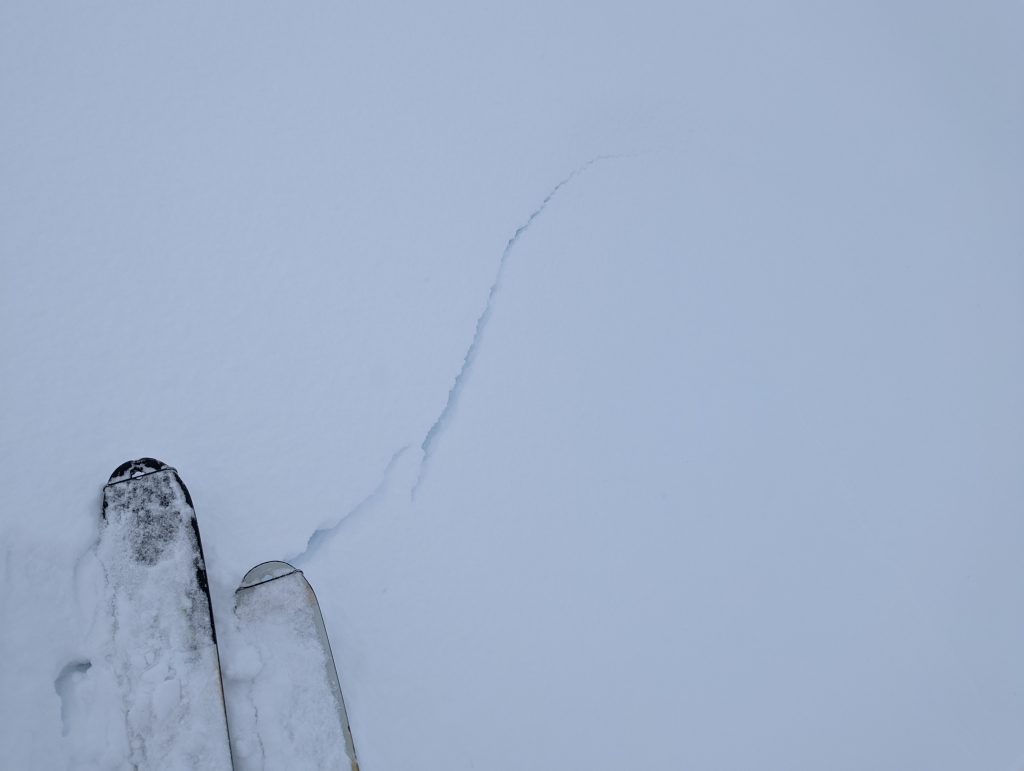 Shooting crack on Fresno Ridge yesterday. This is outside of our advisory area, but we also saw the same behavior on Tincan. This is one sign that the new snow is still capable of avalanching. Photo: Matti Stilta. 03.05.2022 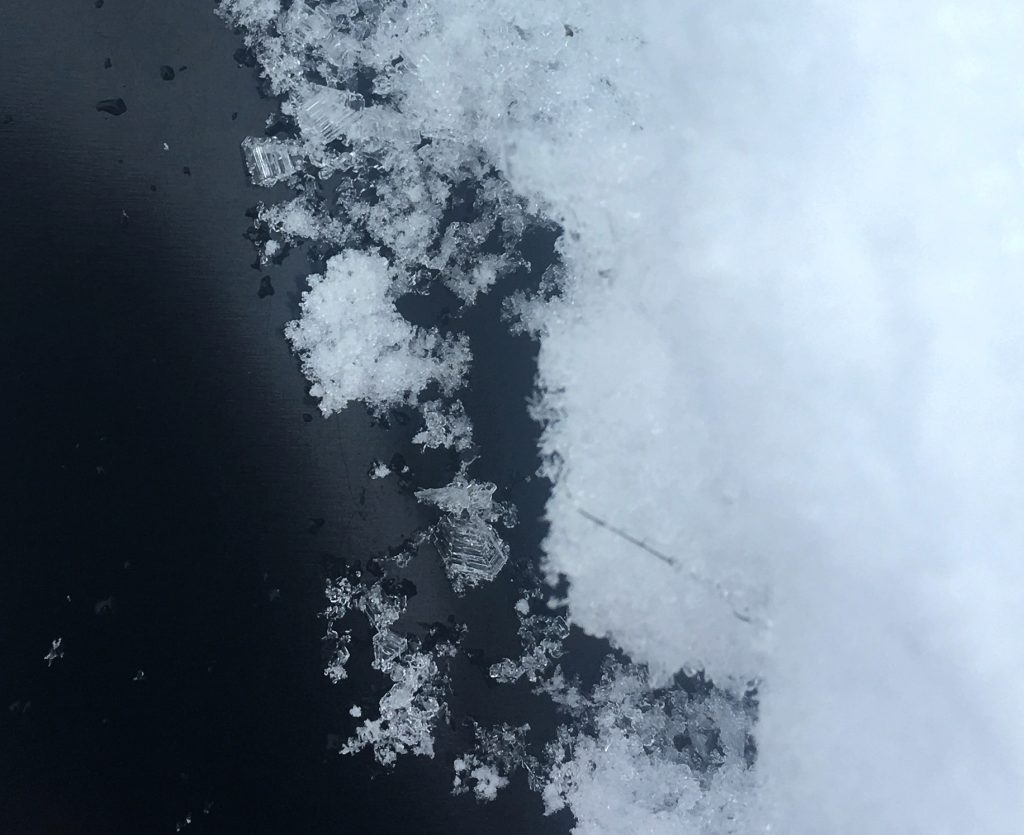 Those little devils with the sharp edges and stripes are the buried surface hoar grains that are giving us a headache now. Time will tell how long they remain an issue, but for now we need to treat them with caution. These were buried 6-18″ deep on Tincan Ridge yesterday, and have been observed throughout the advisory area. 03.05.2022

Yesterday: We saw steady snowfall throughout the advisory area yesterday, with 10-12″ in Girdwood and 4-6″ in Turnagain pass. Rain made it up to around 900′.  Winds were 10-25 mph with gusts of 30-55 mph out of the east until they shifted westerly around 10 p.m. Skies were cloudy and high temperatures reached the mid 20’s to low 30’s F during the day before dropping into the upper teens to upper 20’s F overnight.

Today: It is looking like we are going to have a sunny day today, with clouds clearing by mid morning. There is a chance of some lingering valley clouds, but these are challenging to predict so uncertainty is high. Winds will quickly die down to around 5 mph, and temperatures are expected to reach the upper 20’s to low 30’s F. Low temperatures will drop into the upper teens tonight.

Tomorrow: Fair weather continues tomorrow, with partly cloudy skies and easterly winds at 10-15 mph with gusts of 20-25 mph. High temperatures are looking to be back in the mid 20’s to low 30’s F, and no precipitation is expected. Active weather returns in the middle of the week, with another round of snow on the horizon for Tuesday night into Friday.