The avalanche danger is CONSIDERABLE above 1000′. New snow and strong winds have built sensitive slabs of snow on top of a weak layer of buried surface hoar, making it likely a person could trigger an avalanche 1-2′ deep or deeper. The avalanche conditions will be the most dangerous in areas that have gotten the most snow over the past two days. Pay close attention to how much new snow is sitting on top of the old firm surfaces, and be cautious with your route finding today.

The danger is MODERATE below 1000′, where it is still possible a person could trigger an avalanche, but lower storm totals and lighter winds mean the avalanches are a little less likely than they are in the alpine.

PORTAGE/PLACER: These areas have gotten much more snow than the rest of the advisory area, and that has resulted in very dangerous avalanche conditions. Natural avalanches are likely today, human triggered avalanches are very likey, and travel in avalanche terrain is not recommended for these zones.

Placer Valley: There was widespread activity near the Skookum Valley and Squirrel Flats areas, including a lot of natural activity and some potential remotely-triggered avalanches. They were all soft storm slabs, suspected to be failing on the layer of buried surface hoar we’ve seen across the advisory area.

Eddie’s: A skier triggered a small  slab avalanche with a ski cut on the front side of Eddie’s. The avalanche was an estimated 50′ wide and failed on the same layer of buried surface hoar. 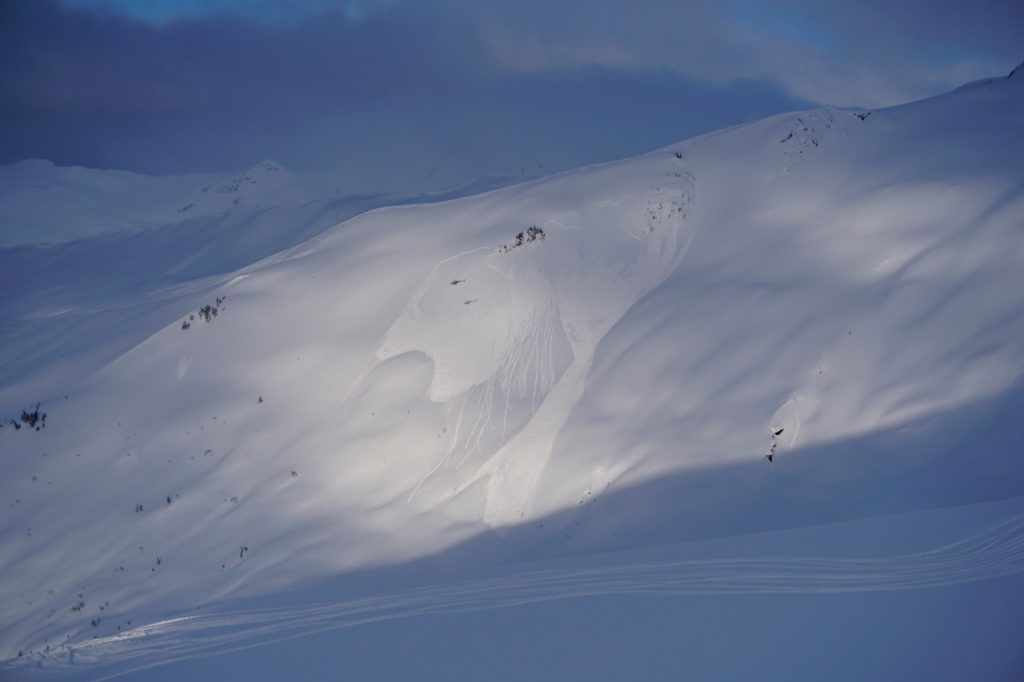 One of many avalanches above the Placer Valley yesterday. Photo: Mike Welch. 03.03.2022.

Avalanches failing at the interface between new and old snow are still the main concern today. The snow that started falling Wednesday night buried a layer of surface hoar that is present throughout most of the advisory area. In Girdwood and Turnagain Pass, storm totals are around 6″ or less, but continued strong easterly winds are drifting the snow into thicker slabs that will likely be reactive today. In the Portage and Placer Valleys, we could see storm totals approaching 2′ before the end of the day, making for very dangerous avalanche conditions. In the areas with the higher snow totals, the storm snow alone will make avalanches big enough to bury a person. For the zones that have ended up on the dry end of the storm, the bigger concern will be on slopes that are getting loaded by strong winds.

Because of the layer of buried surface hoar, we can expect the snowpack to be more reactive than a typical storm slab/wind slab avalanche problem. This means that travel in the backcountry will require careful snowpack evaluation and cautious route finding. Places with little or no new snow will be generally safer than the areas that have gotten more snow in the past two days. That doesn’t mean you can let your guard down. Pay attention to new snow totals as you travel, and be especially cautious around slopes that are getting loaded during the day. Be on the lookout for natural avalanches, especially in the upper elevations. Keep an eye out for other warning signs of unstable snow, like cracks shooting out from your skis or snowmachine. Take the time to step off the skin track, or hop off your snowmachine and see how much  new snow is sitting on the firm older snow surfaces. If the sun breaks through the clouds later in the day, we might see some natural avalanches as the snow heats up. Yesterday we noticed the snow surface becoming moist after just 15 minutes of sunshine, so be aware that conditions can change quickly.

Cornices: Strong winds will continue to build very large cornices in the alpine. Be sure to give them plenty of space and limit the amount of time you spend traveling under them. 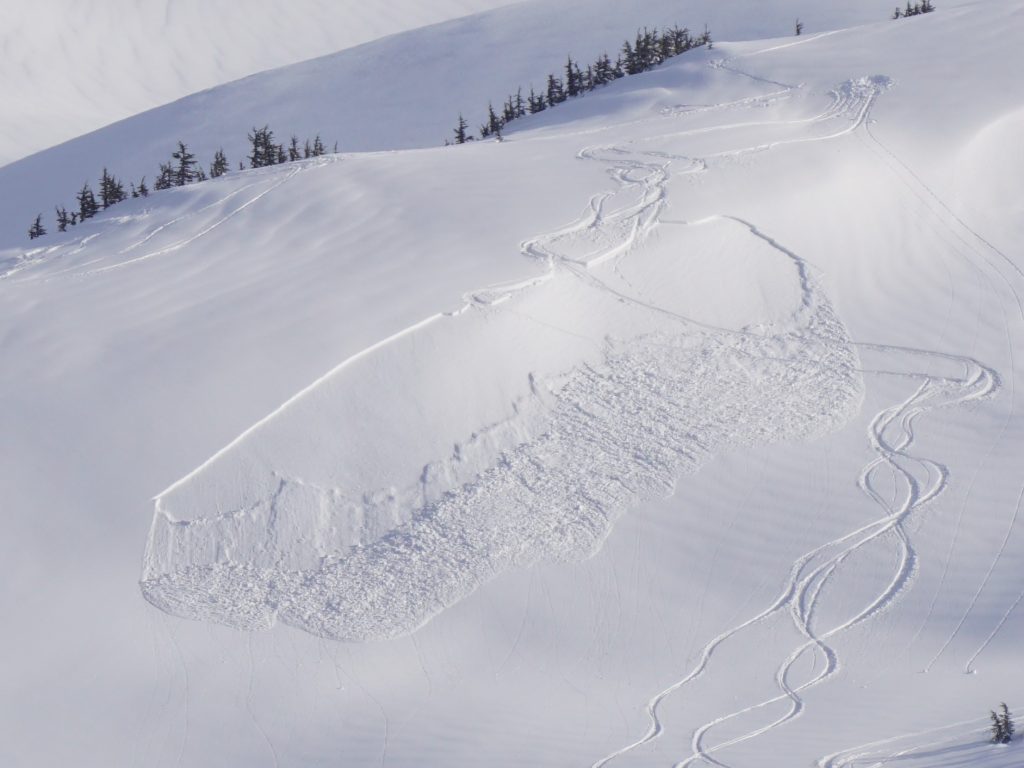 Soft slab avalanche triggered on a steep convex roll on the front side of Eddie’s. The avalanche failed on the layer of buried surface hoar that is present across most of the advisory area. 03.03.2022

That deep layer of weak, sugary facets that formed back in November is still on our radar, especially in the areas around the fringes of our forecast zone with a generally thinner snowpack. This includes the Crow Creek, Johnson Pass, Lynx Creek, and Slivertip Creek areas, as well as the Summit Lake region which is outside of our forecast zone. Without a major loading event it is unlikely a person will be able to trigger an avalanche on that layer, but it is still worth keeping in mind if you are planning on getting out in any of these areas. Deep slab problems are a real headache to deal with since they are slow to heal and seldom give obvious signs of instability. The only real way to manage a problem like that is to be a little more cautious with your terrain choices than you normally would.

Yesterday: We had a little bit of everything yesterday, with light snowfall, some periods of sun, and some other times with thick cloud cover. As of 6:00 this morning, weather stations are showing a trace to 2″ new snow since yesterday morning. High temperatures were in the mid 20’s to mid 30’s F, with overnight lows in the low 20’s to low 30’s F. Winds were blowing 10-25 mph out of the east with gusts of 50-55 mph.

Today: Active weather continues today, but wind is going to be the biggest factor. Easterly winds will be blowing 20-30 mph with gusts of 35-50 mph, with a trace to 3″ of new snow in Turnagain Pass and Girdwood, and 6-10″ new snow in the Portage and Placer valleys. The rain line is expected to stay around 300′. Clouds might start to break up later in the day, possibly allowing for some sun to poke through. High temperatures are looking to be in the mid 20’s to mid 30’s F.

Tomorrow: It is looking like tomorrow will be another stormy day, with 2-5″ expected for Girdwood and Turnagain Pass, and 10-14″ in Portage and Placer by the end of the day. Luckily it is looking like the winds will start backing down during the day. The snow level might creep up a little bit, but it should stay below 600′ with high temperatures in the low 20’s to low 30’s F.