The avalanche danger is CONSIDERABLE above 2500′. Strong winds and new snow over the past 12 hours have created fresh wind slabs up to 2′ deep that are likely for human triggering and possible for natural avalanches. This storm buried a layer of surface hoar that existed on all aspects and elevations and could cause wind slabs to be larger than normal and possibly release on lower angle slopes if the surface hoar was buried intact. Below 2500′ the avalanche danger is MODERATE, where lighter winds will make natural avalanches unlikely and wind slabs will be shallower.

PORTAGE/PLACER: The Portage and Placer zones could see up to a foot of new snow by the end of the day today and elevated avalanche danger exists at all elevations. This will cause wind slabs to be up to 3′ deep and create the potential for natural and human triggered storm slabs in the new snow in areas protected from the wind.

SUMMIT LAKE: Strong winds over the past 12 hours have created fresh wind slabs at upper elevations that have the potential to release naturally and trigger deeper avalanches on buried weak layers. Careful evaluation of the snowpack and conservative decision-making is recommended.

A quick pulse of wind and snowfall over the past 12 hours has added some much needed new snow on top of the mostly crusty and wind hardened surfaces in the forecast area. Turnagain Pass and Girdwood received 3-5″ of new snow overnight with Portage and Placer getting closer to 6-8″ of new snow. An additional 1-3″ is forecast today for Turnagain and Girdwood with 5-7″ of additional snow in Portage and Placer. Accompanying this new snowfall are strong winds at ridgetops, averaging 20-35 mph with gusts into the 60s over the past 12 hours. In the core forecast area the snowpack is generally stable and surface avalanche problems associated with the new snow and wind will be the main concern (see additional concerns for discussion of weaker snowpack in periphery areas).

This storm will have created fresh wind slabs up to 2′ deep at upper elevations that are likely for a person to trigger today and possible for natural avalanches. A layer of surface hoar was observed up to ridgetop elevations early this week which could cause wind slabs to propagate more widely than usual if the surface hoar is still intact. Stopping to check whether this layer of surface hoar is upright or was knocked over by winds in the area you are travelling today should give you a better sense of whether the wind slabs will have normal character or perhaps more of a persistent weak layer character with wider propagation and the potential for triggering avalanches on lower angle slopes. Wind slabs are most likely to be found on upper elevation ridgelines, cross loaded gullies, and under convex rolls.

In protected areas storm slabs are possible, especially where the surface hoar was buried intact and was deposited on a firm surface. In Turnagain Pass and Girdwood storm slab avalanches will be less likely today because of limited new snow on top of the buried surface hoar. However, in Portage and Placer total storm snow could be close to a foot by the end of the day today which will make triggering larger storm slabs more likely. 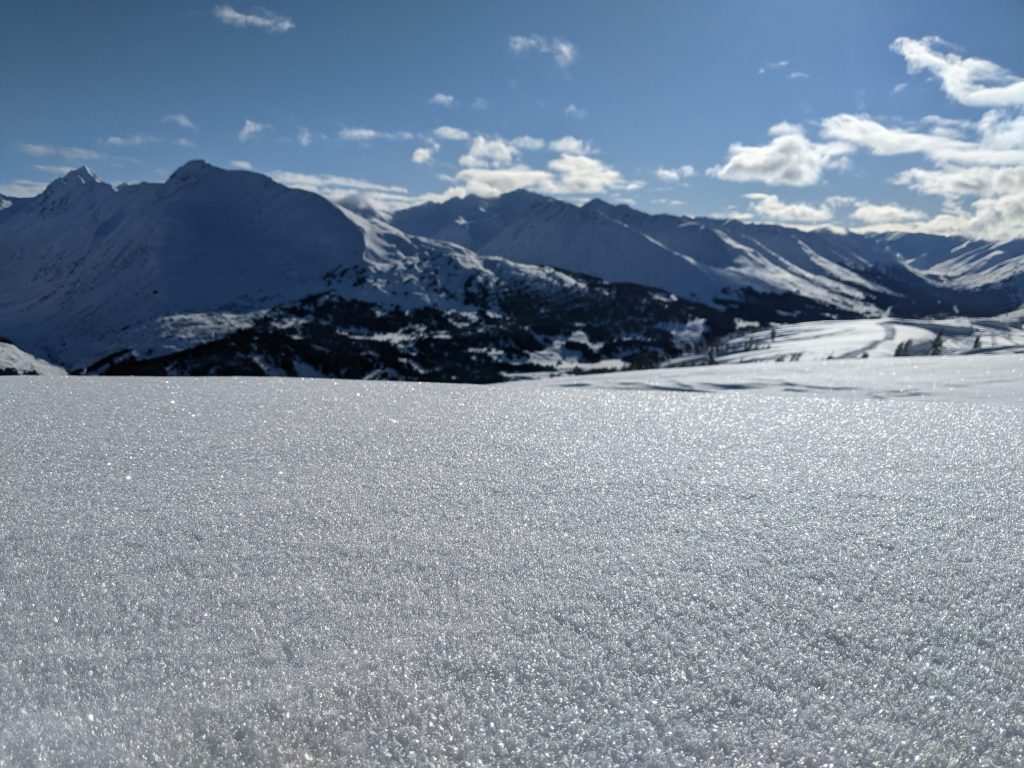 Surface hoar over a thin crust on Seattle Ridge from 3.1.22

In shallow snowpack areas of the forecast zone, like Crow Pass in the far north and Lynx Creek in the far south, we are still concerned about a layer of facets from November that are in between the New Years crust and Halloween crust. The potential for human triggered avalanches on this layer is pretty low because of multiple strong crust layers in the upper snowpack, but if an avalanche was initiated on this layer it has the potential to propagate widely and create a very large avalanche. This layer of facets is more of a concern in the Summit Lake area, which is outside the forecast zone, where an overall shallower snowpack exists and the upper snowpack is much weaker.

Glide Avalanches: A few glide cracks have opened back up on Seattle Ridge above the motorized up track. These are highly unpredictable and can produce very large and destructive avalanches, so we recommend minimizing your time spent underneath them. 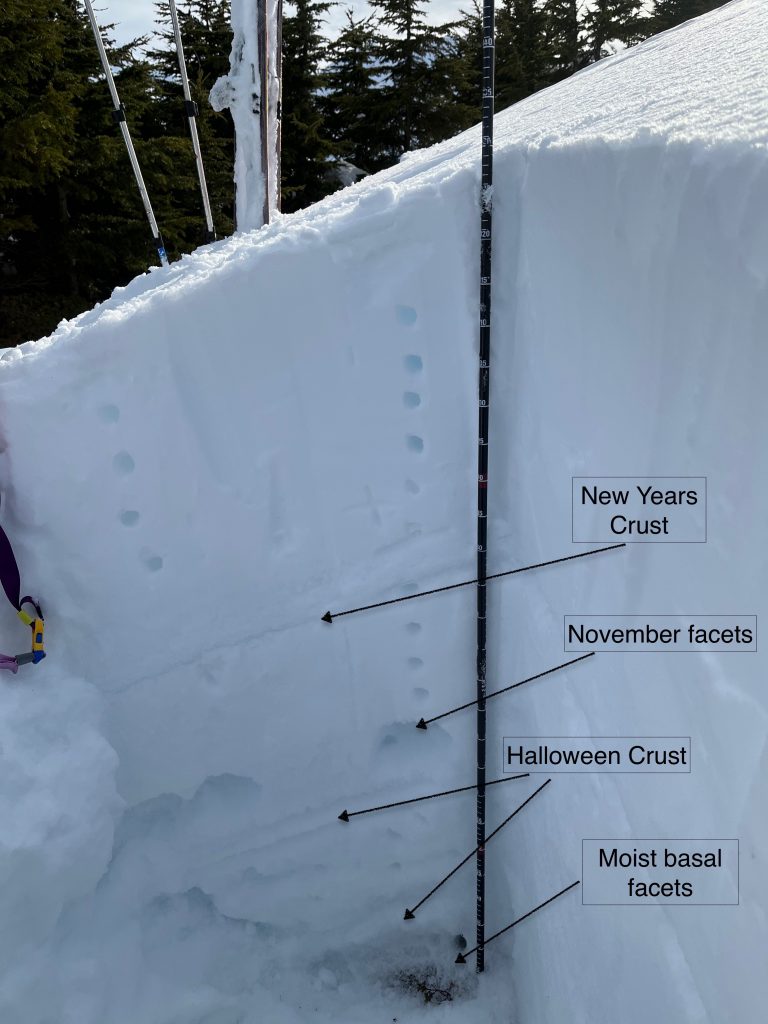 Yesterday: Winds started to pick up in the afternoon with averages in the 20-35 mph range and gusts up to 50-60 mph overnight. Snowfall started in the evening with 0.3″ of water falling overnight in Girdwood and Turnagain Pass which should be about 3-5″ of snow. Portage and Placer have seen 0.6″ of water over the past 12 hours which fell as snow down to sea level and should amount to about 6-8″ of snowfall.

Today: Peak precipitation rates and winds should be in the early morning with snowfall tapering off throughout the morning and ending in the afternoon. Winds will also taper off throughout the day and switch to a more southerly flow this afternoon. Winds will be in the 10-30 mph range with gusts up to 50-60 mph during the tail end of the storm. Another 1-3″ of snow accumulation is possible today in Turnagain and Girdwood with up to 6″ of snow possible in Portage and Placer. Snow level could rise up to 100′ today but most of the snowfall should be over by the time the temperatures increase.

Tomorrow: Unsettled weather is expected to persist Friday, with snowfall continuing in coastal areas. Another low pressure system is going to impact the area overnight on Friday into Saturday morning bringing additional snowfall and increased winds.