The avalanche danger is LOW at all elevations this morning and expected to rise to MODERATE at the high elevations (above 2,500′) later this afternoon. Increasing easterly winds through the day should begin to form small wind slabs on steep wind loaded slopes. Later this evening into tonight, light snowfall with the strong winds will continue to build wind slabs. Watching for active wind loading, giving cornices a wide berth and limiting any time under glide cracks are all recommended for today.

SILVERTIP / SUMMIT LAKE:  A thinner snowpack with buried weak layers exist to the south of Turnagain Pass and outside of the advisory area in Summit Lake. Although triggering an avalanche breaking in these deeper layers is unlikely, extra caution is still advised on steep wind loaded slopes.

After a surprise mostly sunny day yesterday, clouds are forecast to move in today ahead of the next series of stormy weather. Easterly ridgetop winds are already rising this morning and should be blowing 15-25mph with gusts in the 30’s by later this afternoon. Snowfall should begin this evening with 2-3″ possible by tomorrow morning (to sea level!) and another 2-3″ through the day tomorrow. Another, more powerful, system looks to arrive tomorrow night.

With a generally stable snowpack now, the main avalanche concern moving forward will be associated with today’s increasing winds. There is not much snow to transport so any wind slabs that are able to form will most likely be small and in the high elevations. Once the snow starts falling, wind slabs will get a bit larger. There is a new crop of surface hoar that has been forming over the past few days. We saw this on all aspects and elevations on Seattle Ridge yesterday, even on the ridgelines above 3,000′. It has also been reported region-wide by others over the weekend. It is a fairly small layer (2-5mm feathers) but sitting on hard surfaces in many places. Until proven otherwise, we have to assume any new snow or wind slab sitting on this layer won’t bond quickly in the coming days.

For today, paying attention to changing conditions will be important. If you are in an area the wind isn’t transporting snow, the danger will remain LOW. Normal caution avalanche issues will still be present however. These are cornice falls, dry sluffs on steep slopes, and lingering wind slabs in steep rocky terrain. As always, good habits, such as giving cornices a wide berth and being suspect of old wind slabs in steep exposed zones are good practices. 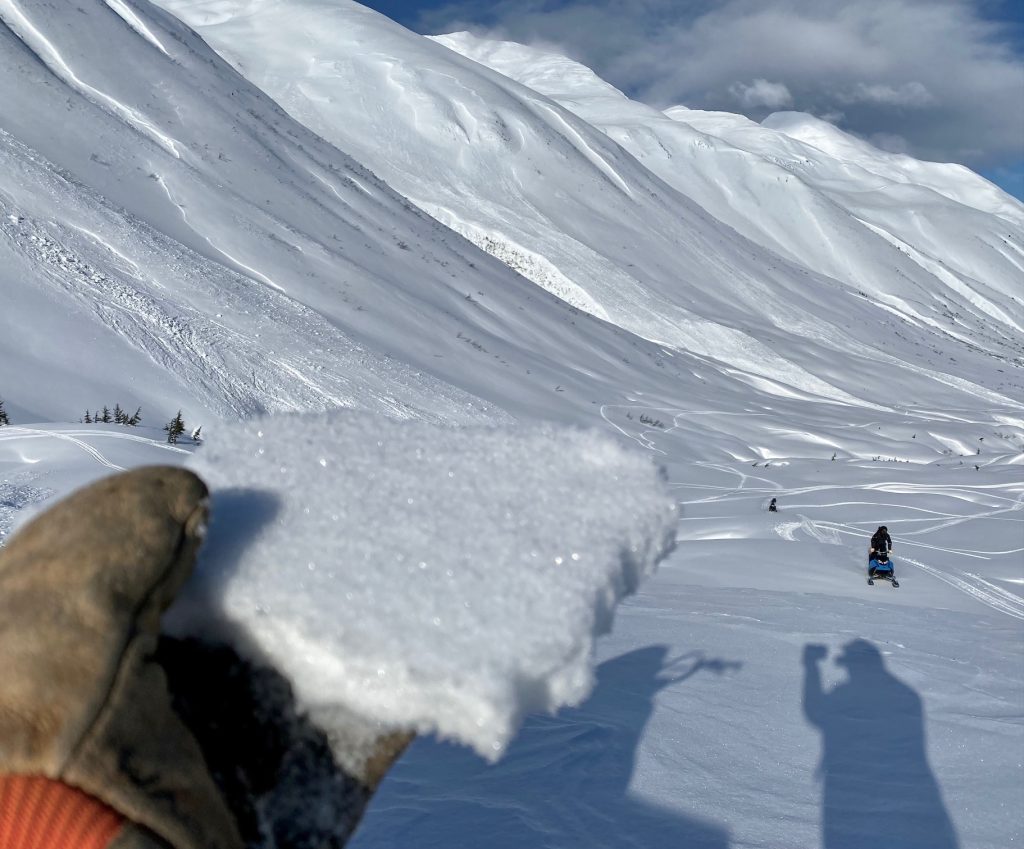 A new batch of surface hoar with some small near surface facets were found on old wind crusts and melt freeze crusts. Sorry – the camera really wanted to focus on John Sykes riding instead of the surface hoar… This photo is from the Seattle Creek drainage yesterday 3.1.22. 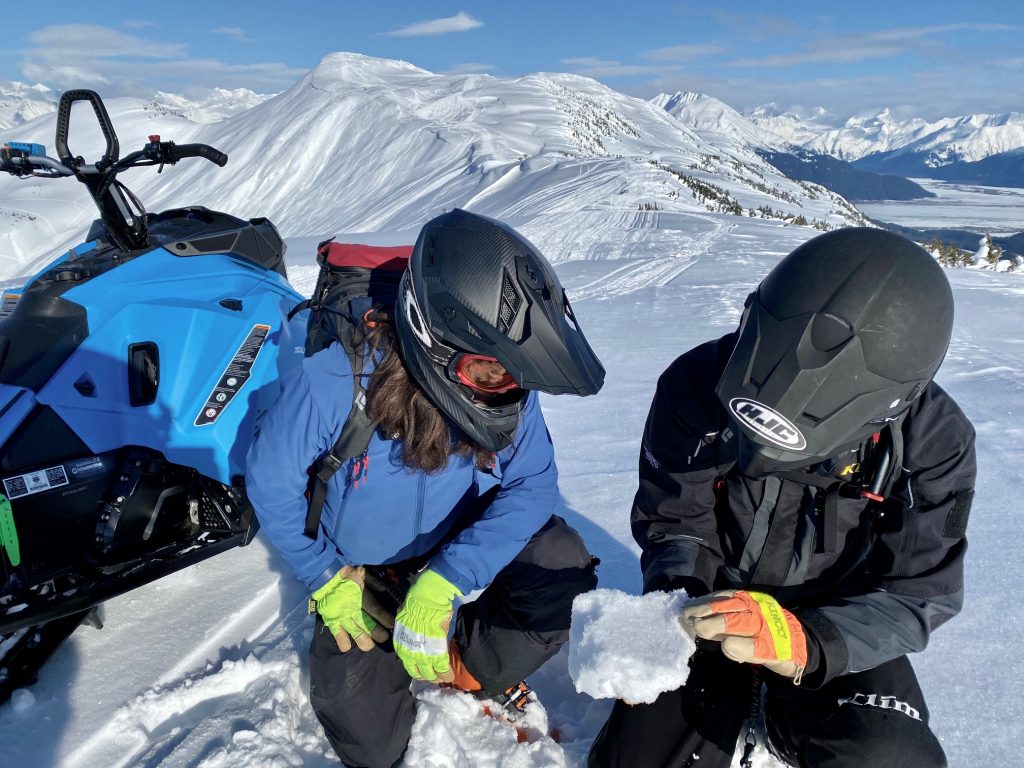 Surface hoar was also found on very hard snow that exists along the highly wind affected Seattle Ridge. 3.1.22. *Big shoutout to Alaska Mining and Diving Supply and BRP/SkiDoo for providing the avalanche center with a new ‘loaner’ snowmachine each season, which gets us into these motorized zones!*

On the far north and south corners of the forecast zone, and to the south in Summit Lake, we are keeping track of old faceted layers that sit near crusts from Halloween and New Year’s. Although these layers are unlikely for a person to trigger, they could become active again with the next strong storm. The system coming in on Friday may not be strong enough to overload these layers, yet this is something we will be watching. In case you missed it yesterday, take a look at this report from Summit Lake that is outside of the advisory area – HERE.

Another additional concern are glide cracks.  A few more glide cracks have been noticed around the region. Be sure to keep an eye out for them and limit time under them. They can release unpredictably into a glide avalanche at anytime. 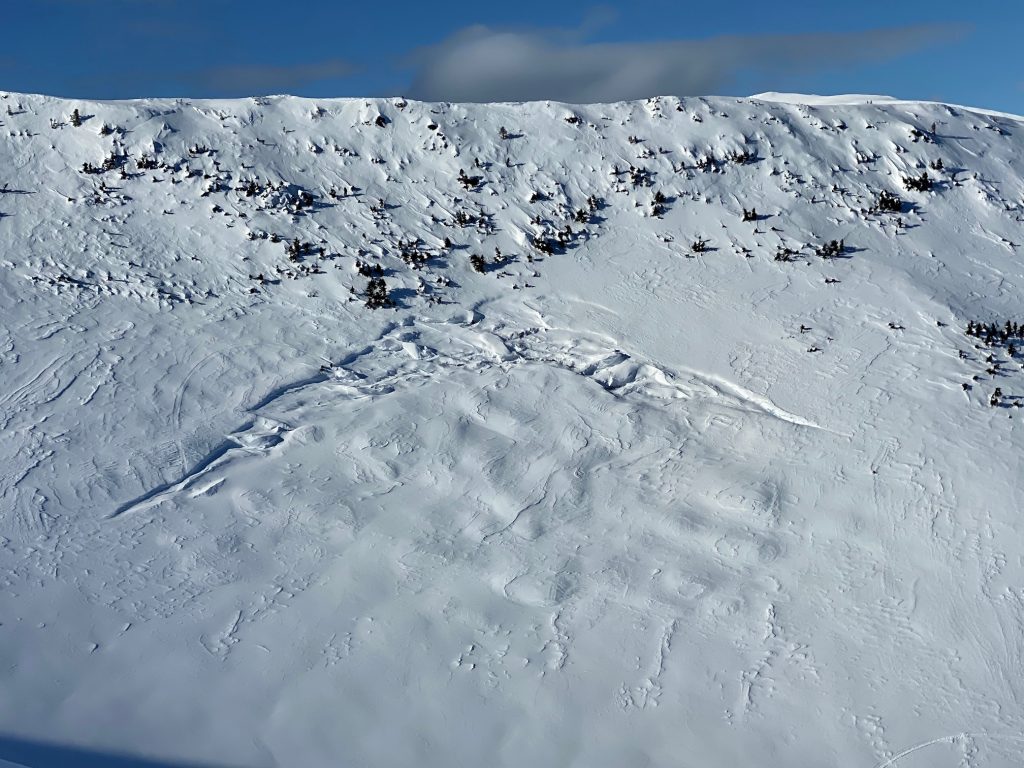 Glide crack, looking west from the Seattle Ridge weather station in the small drainage between 1st and 2nd Bowl. The crack looks to have stopped opening due to the old snow still covering up the ground. 3.1.22.

Yesterday:  Mostly sunny, to partly cloudy, skies were over the region yesterday. Ridgetop winds were light from the east. Temperatures were in the 20’sF at the higher elevations and in the mid 30’sF at lower elevations.

Today:  Mostly cloudy skies are forecast today with light snowfall beginning this evening. By tomorrow morning 2-3″ of new snow is forecast to sea level. Ridgetop winds will be slowing rising through today and blowing 15-25mph by this evening with stronger gusts. Temperatures should remain just under freezing at lower elevations and in the 20’s at the higher elevations.

Tomorrow:  Light snow with moderate to strong east winds will continue through tomorrow as this next system passes through. Around 2-3″ of snow is forecast to fall through the day. Another round of snow is headed in for Friday. Stay tuned.