The avalanche danger is LOW at all elevations in the Turnagain Pass region. Triggering a large avalanche is unlikely. In exposed steep terrain with wind affected snow, watch out for small isolated wind slabs. Additionally, watch your sluff on steep sustained slopes and chutes. As always, give cornices a wide berth and limit exposure under glide cracks.

CROW PASS AREA:  The snowpack in the Crow Pass/Crow Creek area is thinner and deeper weak layers exist. Although it is unlikely a person could trigger a large avalanche, a cautious mindset is advised if heading to high elevation, steep, and wind affected terrain.

SILVERTIP / SUMMIT LAKE:  Additionally, the snowpack is thinner to the south of Turnagain Pass and outside of the advisory area in Summit Lake. These areas harbor buried weak layers surrounding crusts and have seen significant wind effect. Triggering an avalanche is also unlikely here, yet extra caution is still advised on steep wind affected slopes.

No new avalanches were seen or reported yesterday. The last avalanche activity was associated with the storm on Friday, 2/25.

Another quiet, but cloudy, weather day in on tap. The snowpack has adjusted to last Friday’s storm and we are in a Normal Caution regime until the next weather event arrives. This means triggering an avalanche large enough to cause harm is unlikely. However, there are always some exceptions in the winter mountains, especially if traveling in high elevation steep terrain.

Things to keep in mind are lingering wind slabs that could be perched on steep unsupported slopes. It’s good to remember that triggering even a small wind slab could knock you off your feet and down somewhere you don’t want to go. Cornices may be the biggest concern right now. They have grown with the last warm storms and could be triggered further back than expected. If you are lucky enough to find a steep slope with soft snow, sluffs could be an issue and something to watch for. There are some glide cracks staring to slowly open, watch for these and avoid lingering under them as they can release at any time. And last, if you are headed to more obscure spots that could have a shallow snowpack, there are old buried weak layers we are keeping track of. More on that below.

Good travel habits are important, even during LOW danger. This includes exposing only one person at a time on a slope, watching your partners closely and having an escape route planned in case the snow moves. 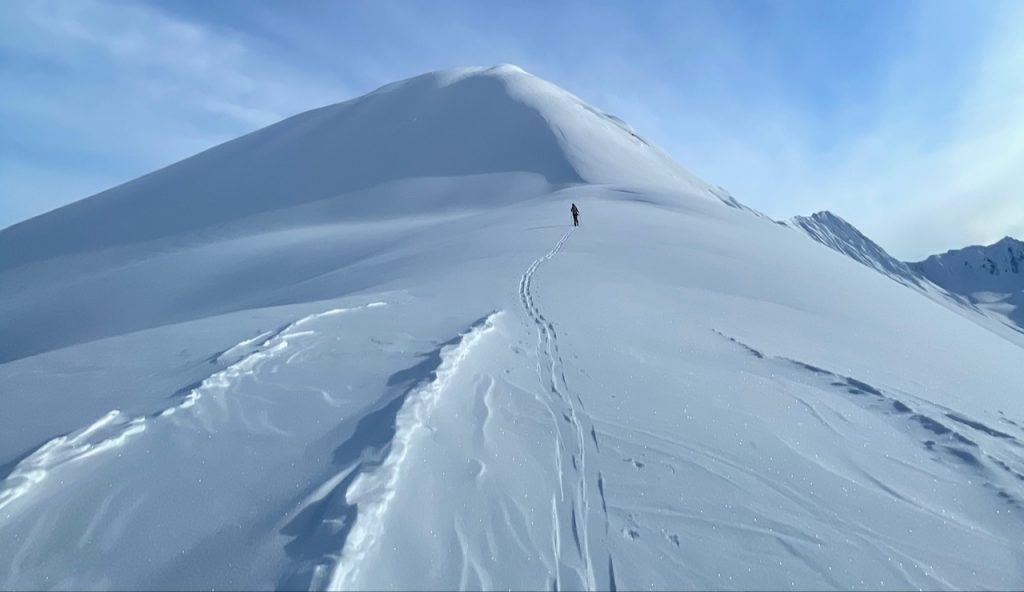 A skier skinning up to Eddies Headwall on Sunday. Note the wind effect at ridgeline – including anti tracks – but also patches of soft faceting snow. Photo Andy Moderow 2.27.22.

In a couple small corners of the forecast zone and to the south in Summit Lake, we are still watching those old faceted layers that sit near crusts from Halloween and New Year’s. The past couple warm storms during late February were able to overload these weak layers and create some very large avalanches. Now that the snowpack has cooled and adjusted, it would be unlikely that a person could trigger one of these large slides. The most concerning spot is down near Summit Lake and possibly Silvertip where the weak layers are around 3′ deep in places. Take look at former CNFAIC forecasters, Aleph and Heather’s, report from Summit Peak. The snowpack is clearly much different there than in the heart of Turnagain.

The main point is, if you are headed to areas with less snow cover, be mindful of the poor snowpack structure. In these cases it is always good to consider the consequences if there was to be an outlier avalanche. 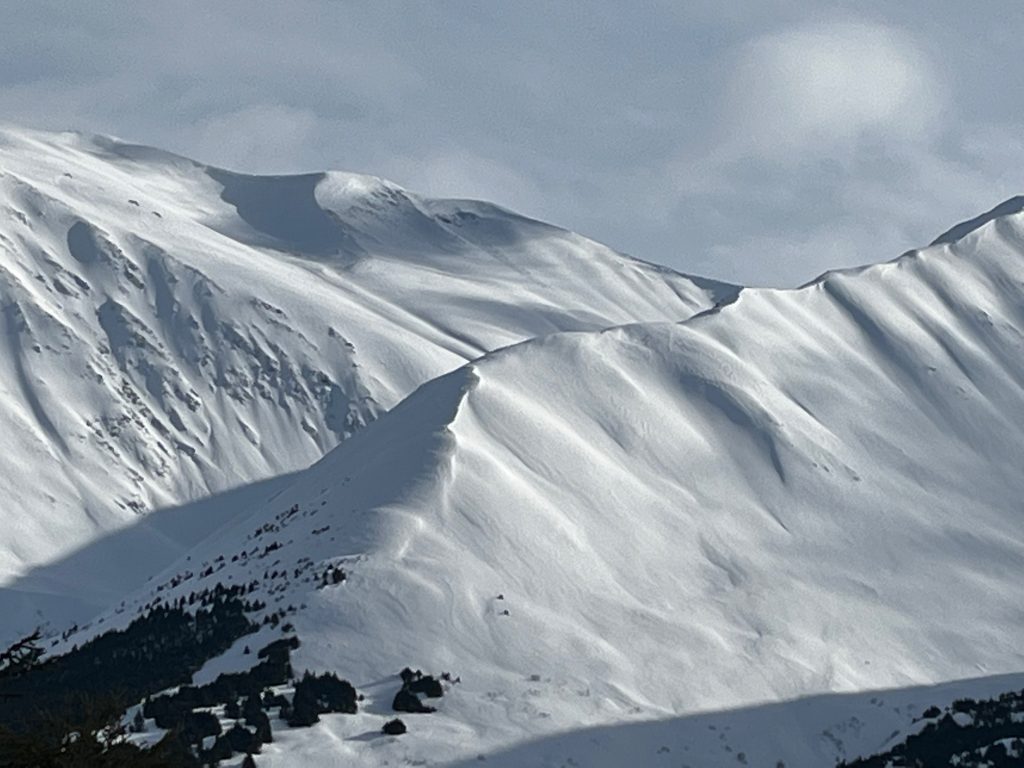 A look at the wind effect on Tenderfoot Ridge from Summit Peak on Sunday. Photo Aleph Johnston-Bloom, 2.27.22.

Yesterday:  Mostly cloudy skies were over the region yesterday with no precipitation recorded. Ridgetop winds were light and variable, becoming light from the east overnight. Temperatures have remained in the 20’sF at the upper elevations while lower elevations were in the mid 30’sF.

Today:  Cloudy skies with a chance for a new snow flurries. No accumulation is expected. Ridgetop winds are expected to remain light from the east (5-10mph with gusts in the teens). Temperatures should remain in the 20’sF along ridgelines and in the 30’s at the lower elevations.

Tomorrow:  Quiet weather looks to remain through most of tomorrow before the next weather system approaches tomorrow night. This should bring increasing east winds and several inches of snow to elevations above 1,000′. Stay tuned for the chance of improved snow conditions!