The avalanche danger is MODERATE at all elevations for triggering a wind slab avalanche 1-2′ deep. Any slope with prior wind loading, or wind loaded areas, will be possible for a person to trigger a wind slab. Slabs may be stiff enough to allow a person onto them before releasing and they could be triggered remotely, meaning from the top or the side. Additionally, cornices have grown and give these a wide berth as they could break further back than expected.

The mostly clear skies yesterday gave us a look around at the widespread natural wind slab activity from Thursday’s wind event. Also, a few groups out found wind slabs to be very touchy a day after the wind loading:

Notch Mountain in Girdwood Valley:  A group of skiers triggered two wind slabs, one of which was 12″ deep and had very wide propagation. No one caught. Report from group HERE.

Fresno in Summit Lake: A group of skiers triggered a wind slab up to 16″ deep on a wind loaded slope in Summit Lake. No one caught. Report from group HERE. 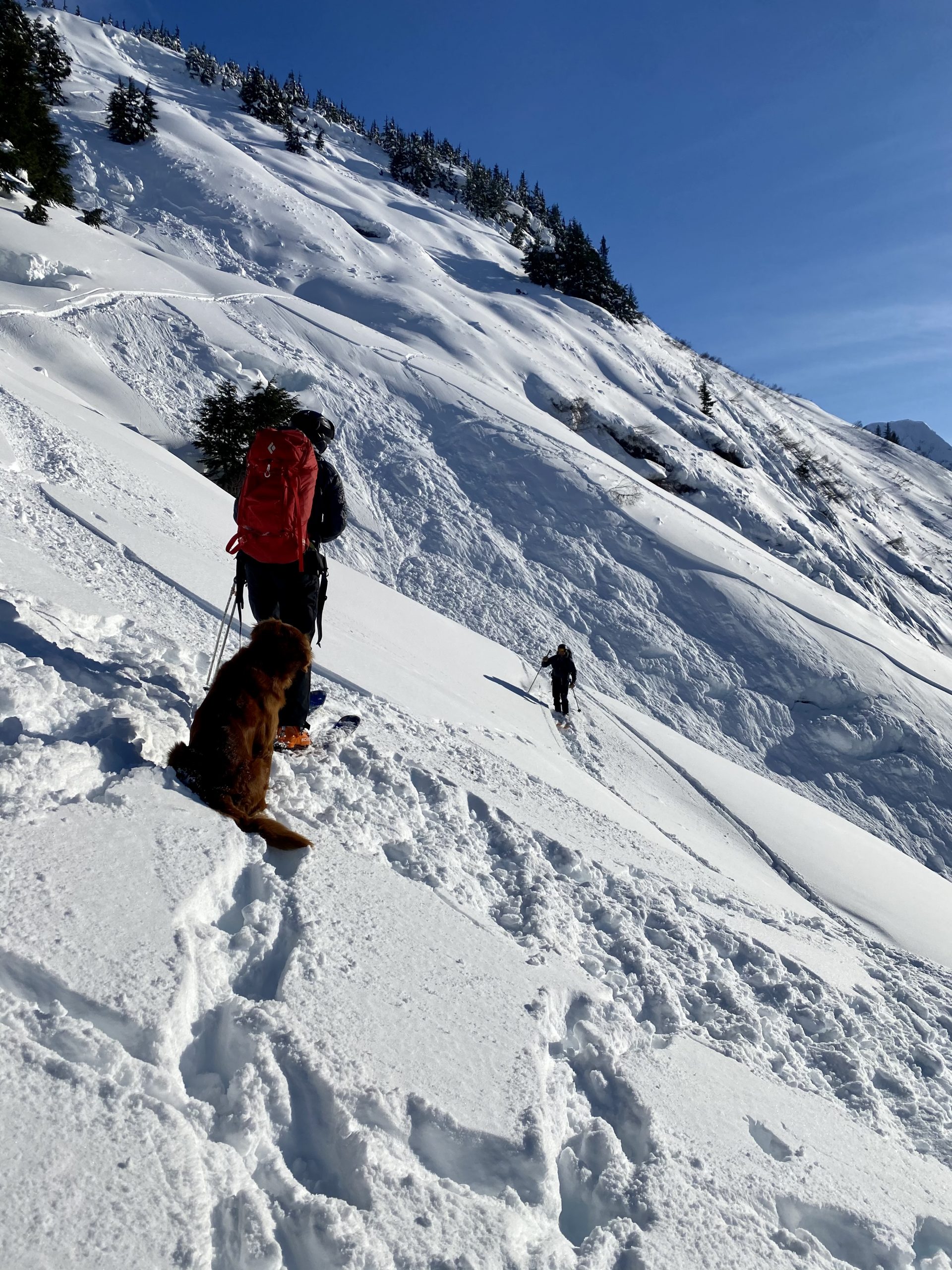 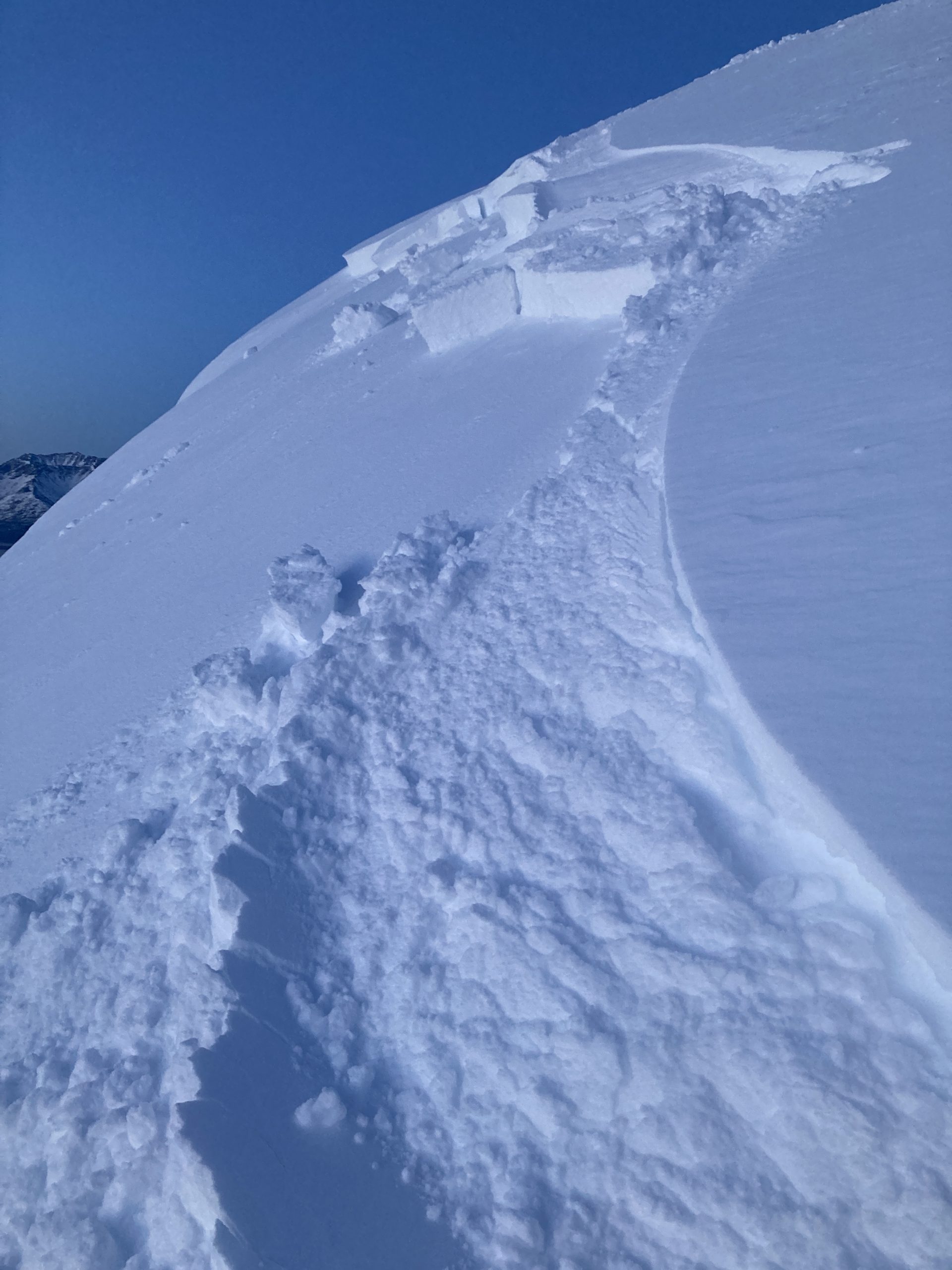 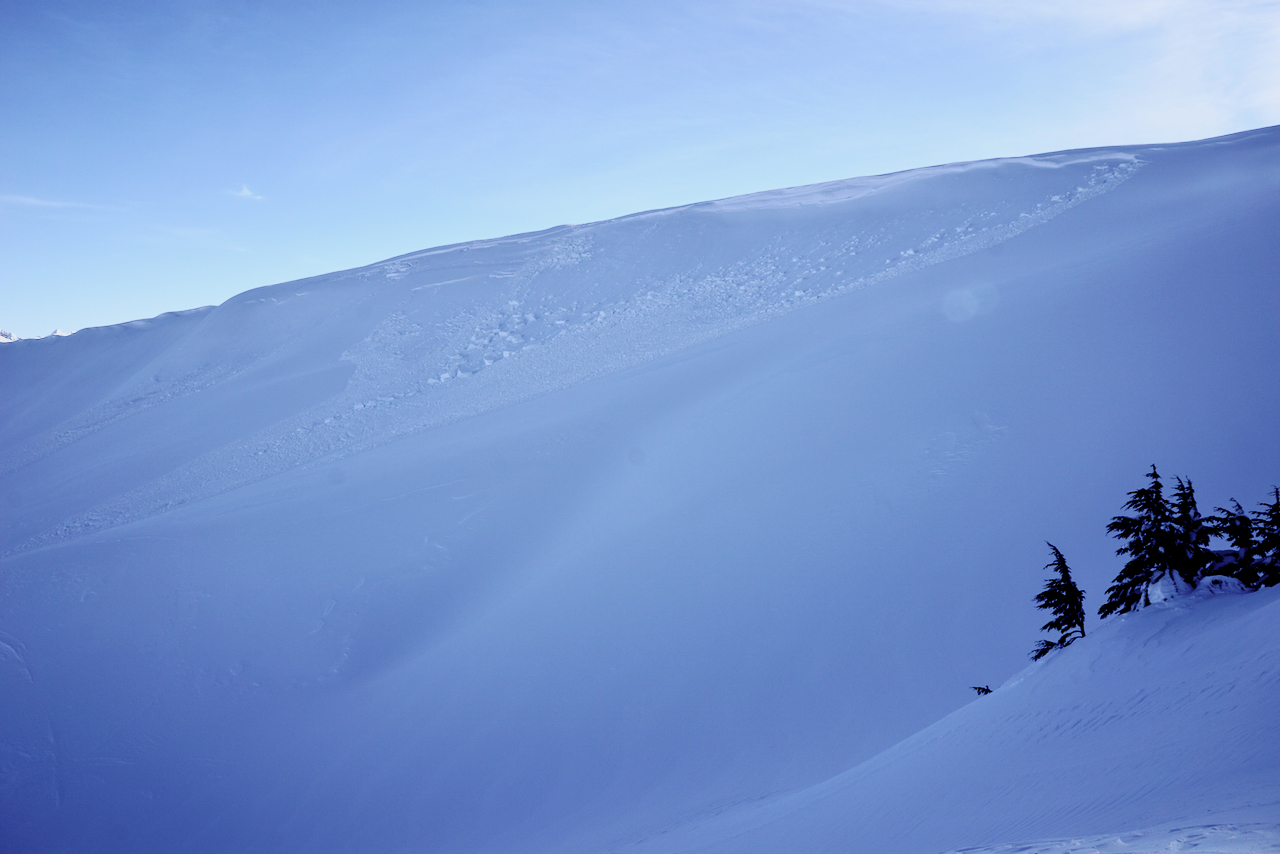 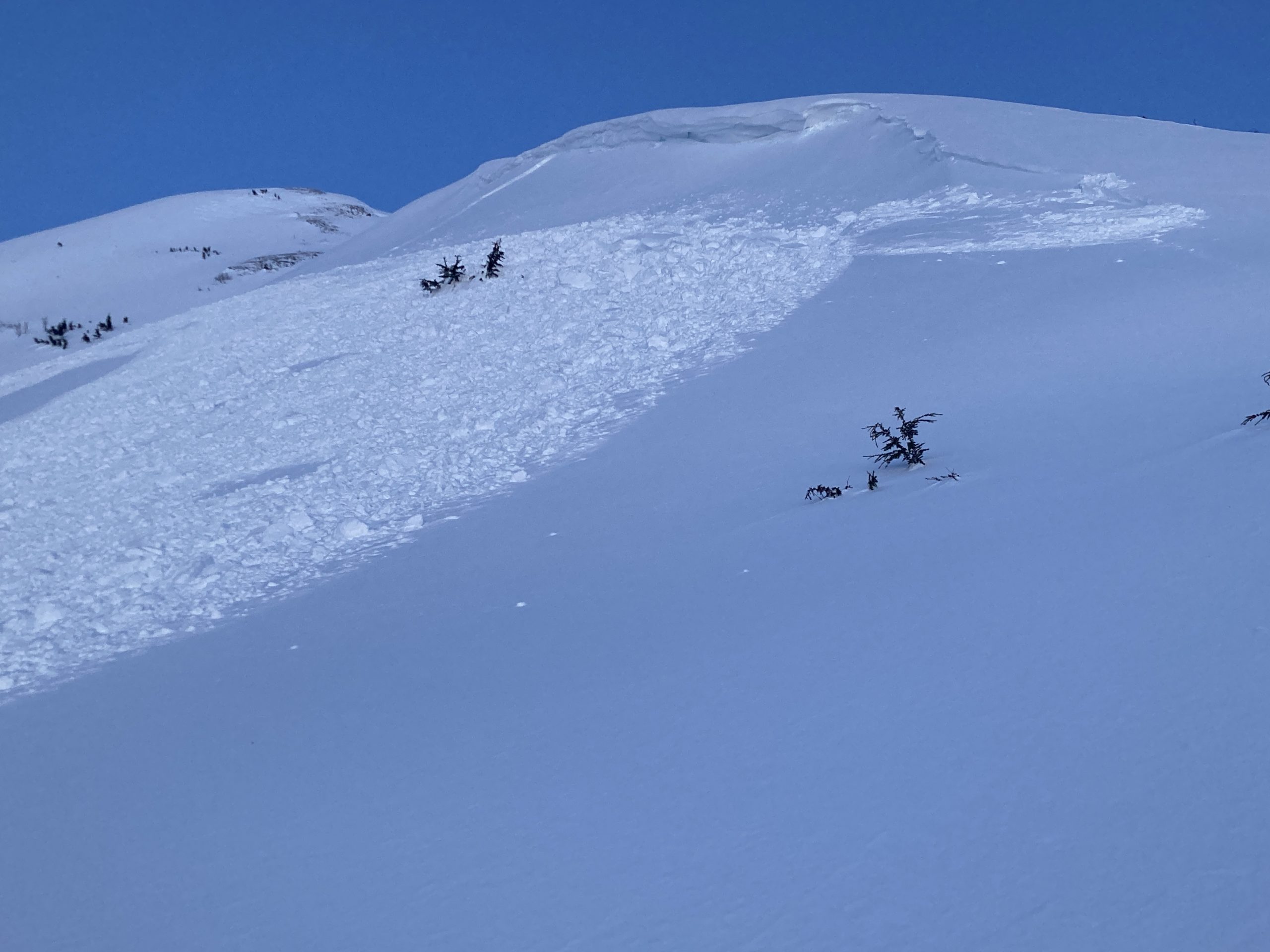 It appears a sunny Saturday is on tap for those headed to Turnagain Pass and surrounding areas. It may be in the single digits in the parking lots, but a short climb out of valley bottoms should get us to 20F. The east wind event on Thursday really wreaked some havoc in many areas. There are places where much of the snow simply blew back into the atmosphere, left us anti-tracks, and is gone for good. Yet, it sounds like this isn’t the case everywhere, luckily. If you are in search of those soft snow zones be sure to keep your eyes peeled for prior signs of wind loading and wind slab avalanches.

Wind slabs are the primary concern and could be a bit tricky. These formed over the past couple days and are likely to be sitting on either faceted snow or buried surface hoar. Both of which is keeping them from bonding quickly and why folks were able to get them to release easily yesterday. They should be getting more stubborn as time goes on, but that can add to the tricky-ness. Because of this and their stiffness, they might allow a person onto them before releasing, giving that person less of a chance of escaping. Winds blew at all elevations and slabs could be lurking lower on slopes. Really paying attention to cracking in the snow and hollow feeling snow is key.

Making things a bit more complicated is an older layer of buried surface hoar that may or may not be sitting under an obvious wind slab. In this case softer slabs could be triggered on slopes without an obvious ‘wind slab’ character. Where winds have done minimal damage, this layer is roughly 8-16″ below the surface pending on the area (deeper in Placer Valley, shallower at Turnagain Pass). It is what we call a persistent slab avalanche problem and though it’s showing signs of healing, it’s good to keep on the radar, especially for those less traveled zones.

Good things to keep in mind for today:

Cornices: These features grew on Thursday and if ridge-walking today, give them an extra wide berth. Also, limit time under them. A cornice fall may trigger an avalanche below, making a bad situation worse. 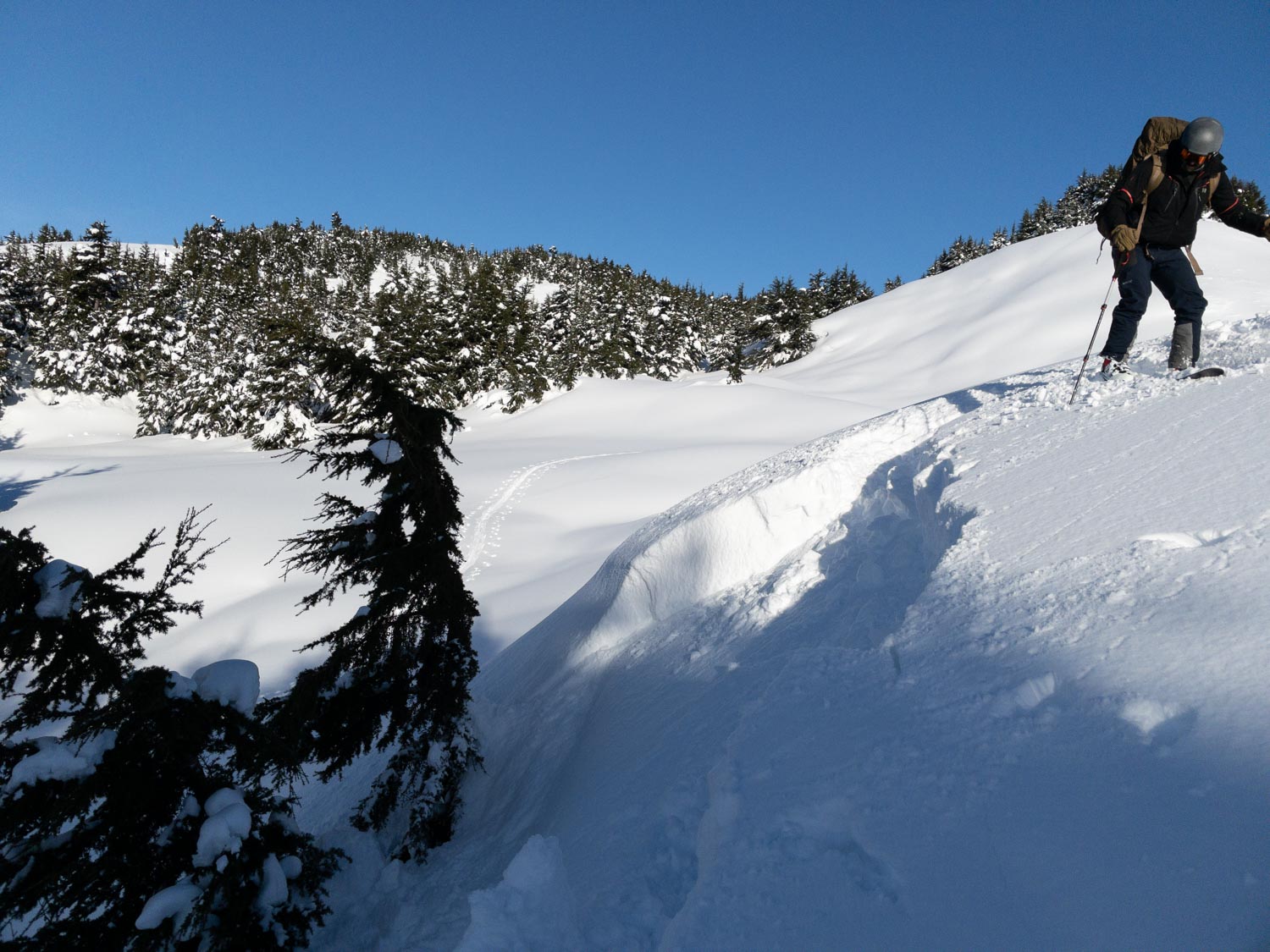 A skier triggers a very small avalanche on a test slope on Center Ridge yesterday. Small test slopes can be good tools for assessing these wind slabs or persistent slabs. 2.12.21. Joe Stock.

Video from Friday 2.12.21 of a natural wind slab on the west face of Seattle Ridge, link HERE.

Glide cracks continue to open up throughout the area. These cracks could release at any time and be very destructive. Avoid spending time below glide cracks. If you see any new glide activity, please let us know here.

Yesterday: Mostly sunny skies with a few high clouds were over the region. Ridgetop winds averaged in the 5-15mph range with gusts into the 30’s mph. Temperatures were mild, in the 20’sF above 1,000′ and in the teens on the highest peaks.

Today: Clear skies are on tap for today, even the satellite doesn’t snow any hint of clouds streaming above. However, there could be some valley fog in spots near the Arm. Ridgetop east winds are forecast to remain light to moderate, averaging 5-15mph with periods of 20mph later this afternoon. Temperatures are chilly in valley bottoms (-10 to 10F) as an inversion is in place, while mid and upper elevations are in the teens to 20F.

Tomorrow: Clouds are expected to begin moving in tomorrow associated with the next approaching weather front. Only flurries are expected at most. Ridgetop winds bump up again to the 20-30mph range from the east and temperatures should bump back up as well into the teens and 20’sF. It isn’t till the middle of this coming week that the models show a precipitation event with a decent re-fresh of snow.