The avalanche danger is MODERATE on slopes above 1,000′. A few inches of new light snow with moderate to strong easterly winds are expected to create fresh and touchy wind slabs today. These slabs should be fairly shallow, in the foot deep or less range. Pay close attention to areas with active and/or recent wind loading. Additionally, there is a chance an older wind slab sitting on weak snow could still be triggered.

PORTAGE VALLEY: More snow (6-8″ by this evening) is expected in Portage Valley toward Whittier. Small natural wind slabs and small cornice falls may occur in the high terrain.

Fresh shallow wind slabs, up to a foot deep, will be the name of the game. A few inches of snow and moderate to strong east wind has arrived. The mountains have picked up between 1-3″ of low density snow overnight with another 2-4″ possible today. The snow is sooo light it’ll have an easy time being blown into new drifts and slabs. With such low snow amounts, it will be winds that will be the avalanche problem driver. Ridgetop east winds have been averaging 15-20mph overnight, yet are forecast to increase through the day to 25-35mph and even more tonight with 35-40mph averages.

How much older loose snow exists to be available for transport and add to the size of these new slabs? Well, plenty pending on the location. The northwest winds from last Saturday moved a good portion of it around, especially along the ridgelines, but this is a different wind direction and we can bet older snow will be adding to new slabs. Additionally, slabs could be very touchy as they will be sitting on weak faceted snow and possibly surface hoar.

What to watch for if you’re headed out:

There is also still a chance a persistent slab avalanche could be triggered. There is an older layer of buried surface hoar from 1.28 that is still on our radar sitting under old wind slabs. It is 8-16″ below the surface and showing signs of becoming harder to fail, which is good news. However, it still deserves our respect. A person or a fresh wind slab triggered may be able to step down to this layer. Something to keep in mind in big terrain.

Sluffs: If there are steep slopes out of wind, watch your sluff. These continue to be easily triggered and high volume in steep sustained terrain.

Cornices: Some cornice development is likely today. As always, give them a wide berth and limit exposure under them. 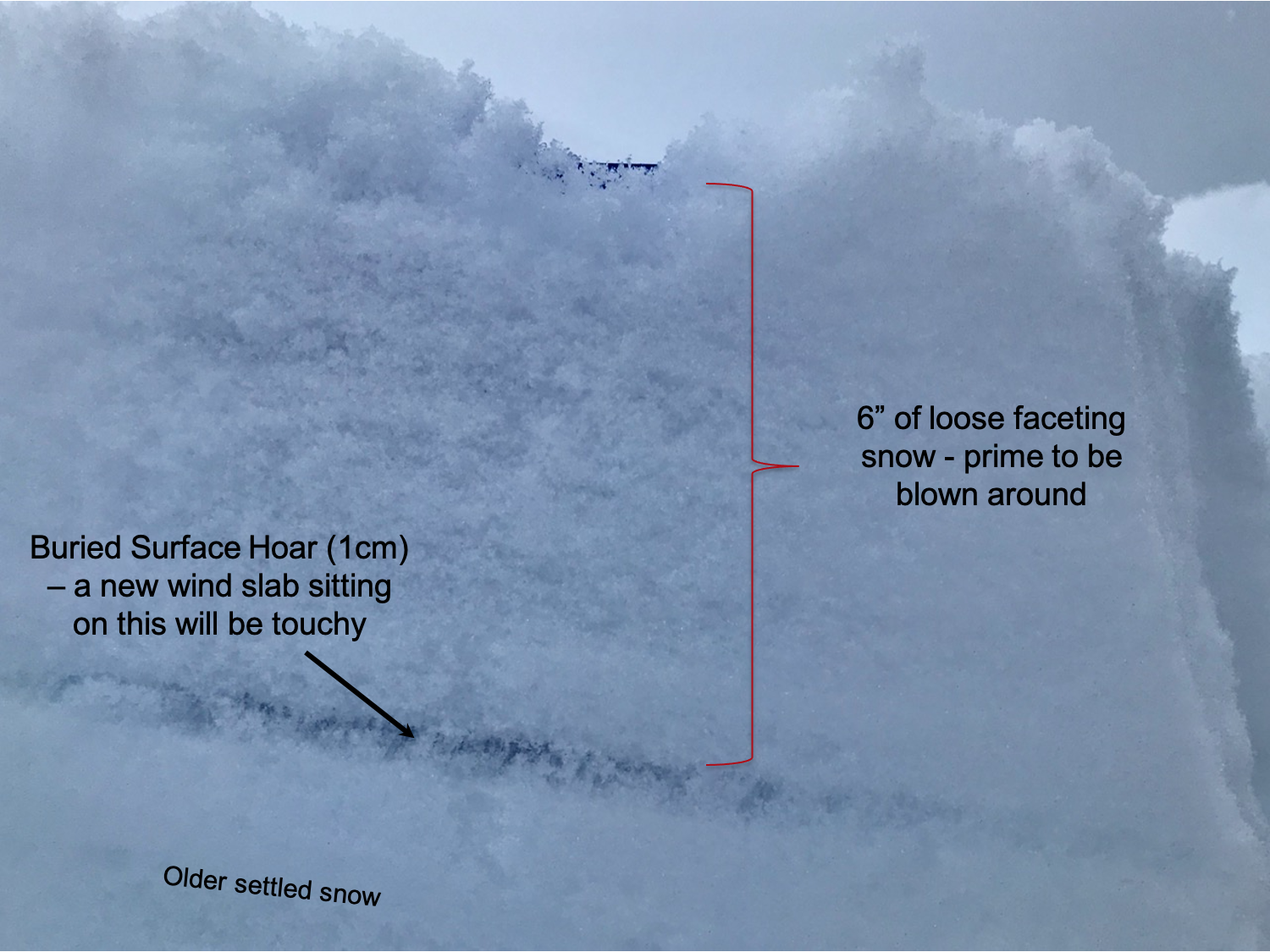 A look at the top 8″ of snow of the snow pack from Aleph’s field day on Orca yesterday. Soft snow available to be blown around over a future weak layer of buried surface hoar. 2.9.21. 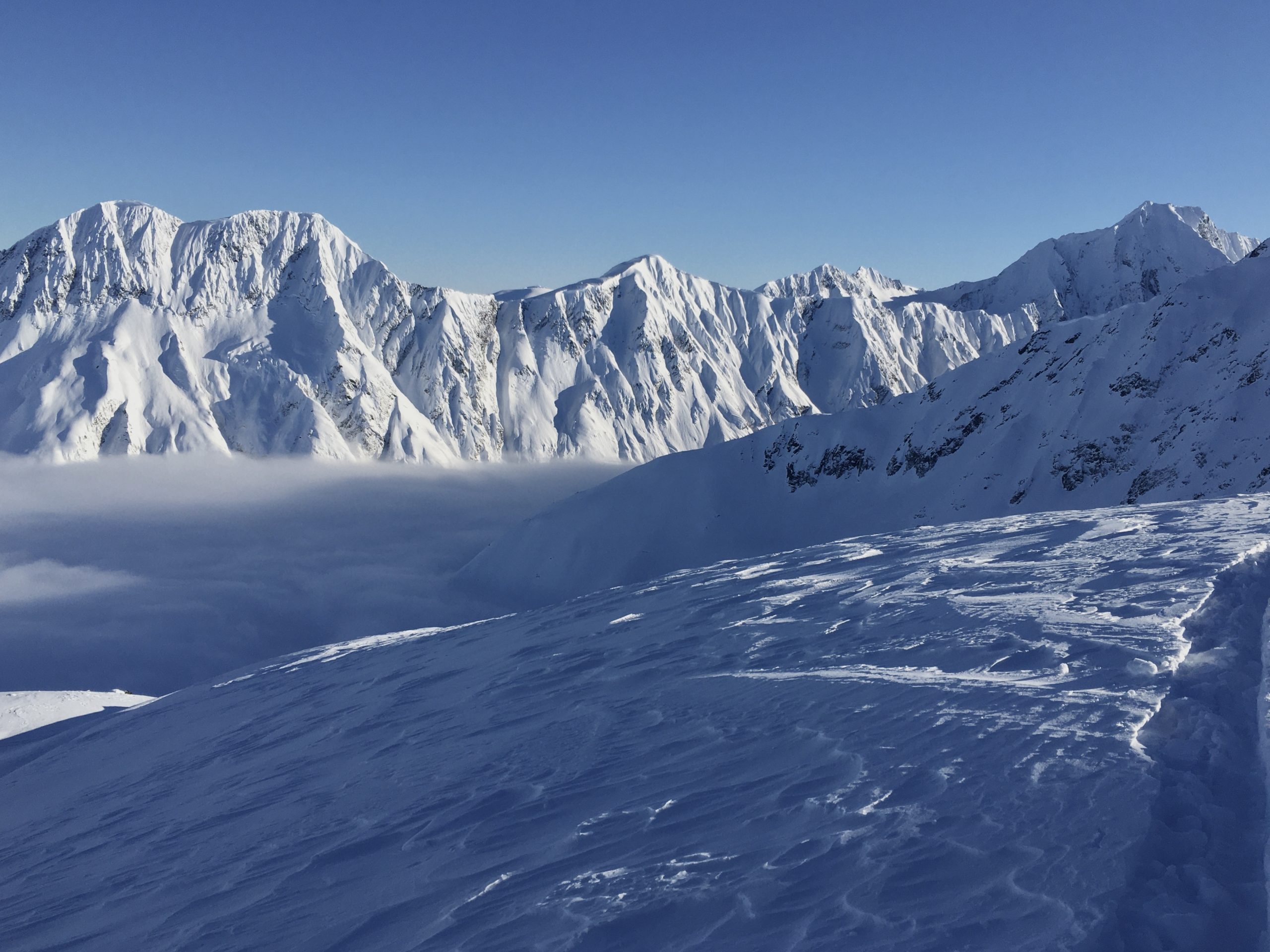 Wind effect along the high terrain from Saturday’s northwest winds. Not a lot of snow to be blown around here, but there is just off the ridgelines. Photo from 4,500′ looking northerly into Skookum drainage and at Byron Pk and Carpathian. 2.8.21.

After many days without a known glide release, there was one on Penguin Ridge above Girdwood yesterday. Otherwise, cracks are still on the move, slowing opening. It is very prudent to simply avoid being under glide cracks. 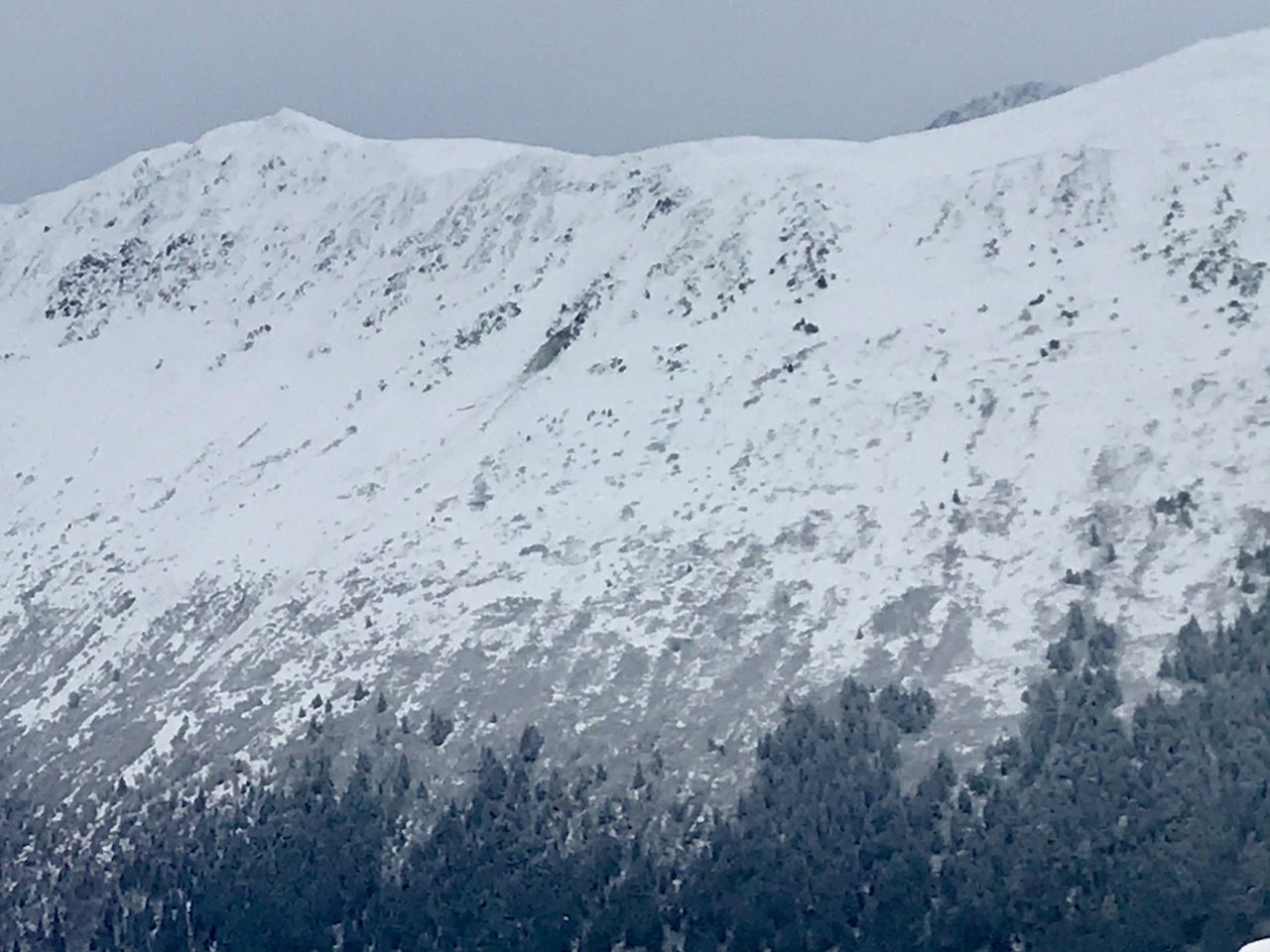 Glide avalanche on Penguin Ridge yesterday. Look for the dark spot in the middle of the photo. 2.9.21. 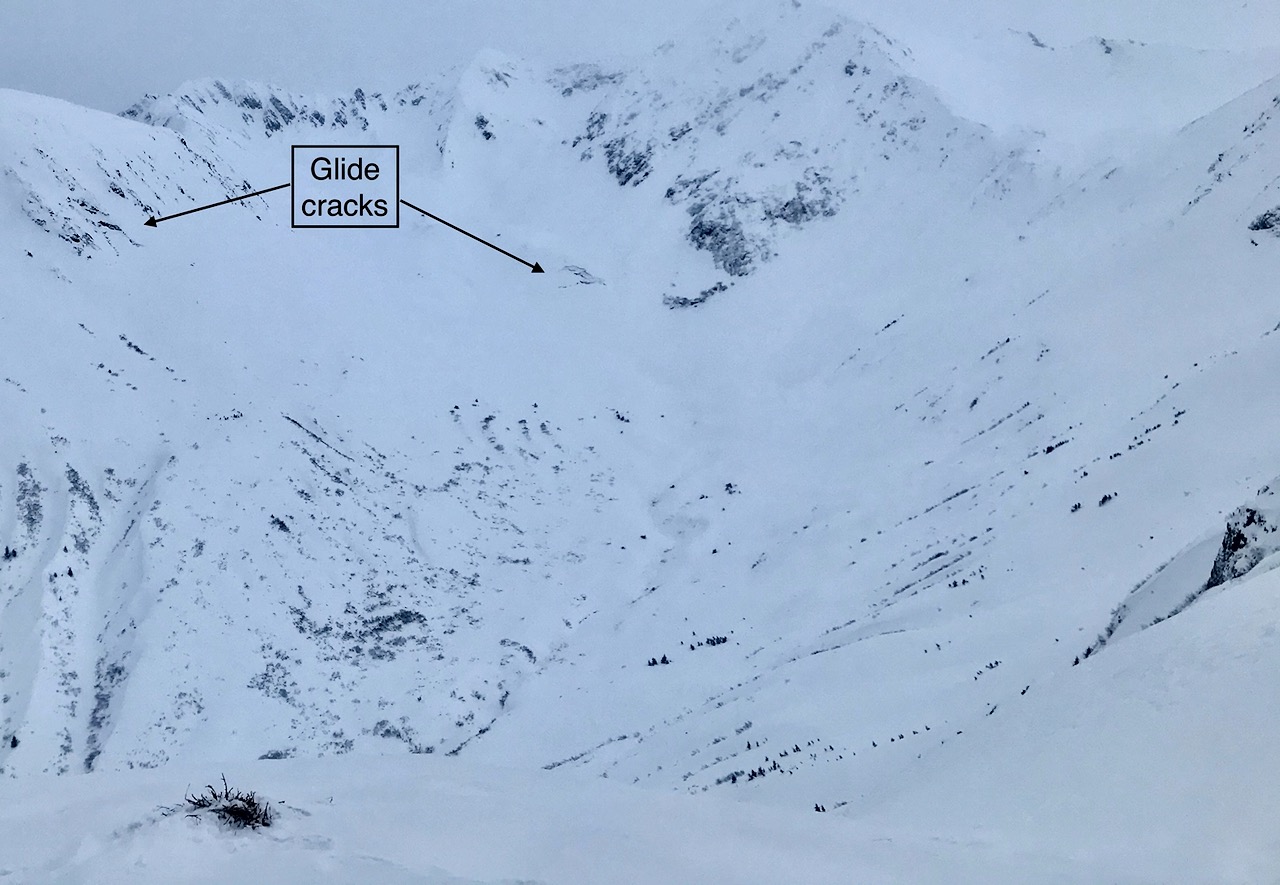 Glide cracks in upper Virgin Creek in the Girdwood area. 2.9.21.

Yesterday: Mostly overcast skies filled the region ahead of a light snowfall event that pushed in. Snow began around 5pm and as of 6am this morning only 1-3 inches of very low density snow has accumulated – to sea level. Ridgetop winds bumped up last night from the east with averages of 15-20mph and gusts in the 30’s. Temperatures have climbed in the past 24 hours to the 20’sF at sea level and the mid elevations, while the high elevations are in the teens.

Today: Light snowfall is forecast to continue through the day (to sea level) with another 2-4 inches of very low density snow accumulating. Ridgetop easterly winds will remain elevated and averages are expected in the 25-35mph range with stronger gusts. These winds are forecast to climb higher tonight (35-40 averages). Temperatures should hover in the mid to upper 20’sF from sea level to the mid elevations while ridgetops may get close to 20F.

Tomorrow: Cloudy skies with a few snow flurries are expected tomorrow, with little accumulation. The ridgetop winds look to remain strong from the east (30-40mph) before lessening on Friday as the system moves out. Temperatures look to remain in the 20’s at most elevations.