The avalanche danger is CONSIDERABLE on all aspects above 2,500′. Wind slab avalanches will be likely for people to trigger in the higher elevations due to the strong east winds overnight along with increasing westerly winds today. Wind slabs between 1 and 2+’ in depth may be found near ridgelines, on rollovers, and in cross-loaded gullies. At elevations below 2,500, it may still be possible to find and trigger a wind slab in exposed areas in the trees and a MODERATE danger exists. Additionally, cornices have grown and be sure to give them an extra wide berth.

The avalanche danger is LOW below 1,000′ where a few inches of new snow sit on the wet snow from yesterday, which is freezing, and triggering an avalanche is unlikely.

The only avalanche seen yesterday during a few short periods of good visibility was this large slab in the Placer Valley. It was near the toe of the Skookum Glacier on an upper elevation SW slope. 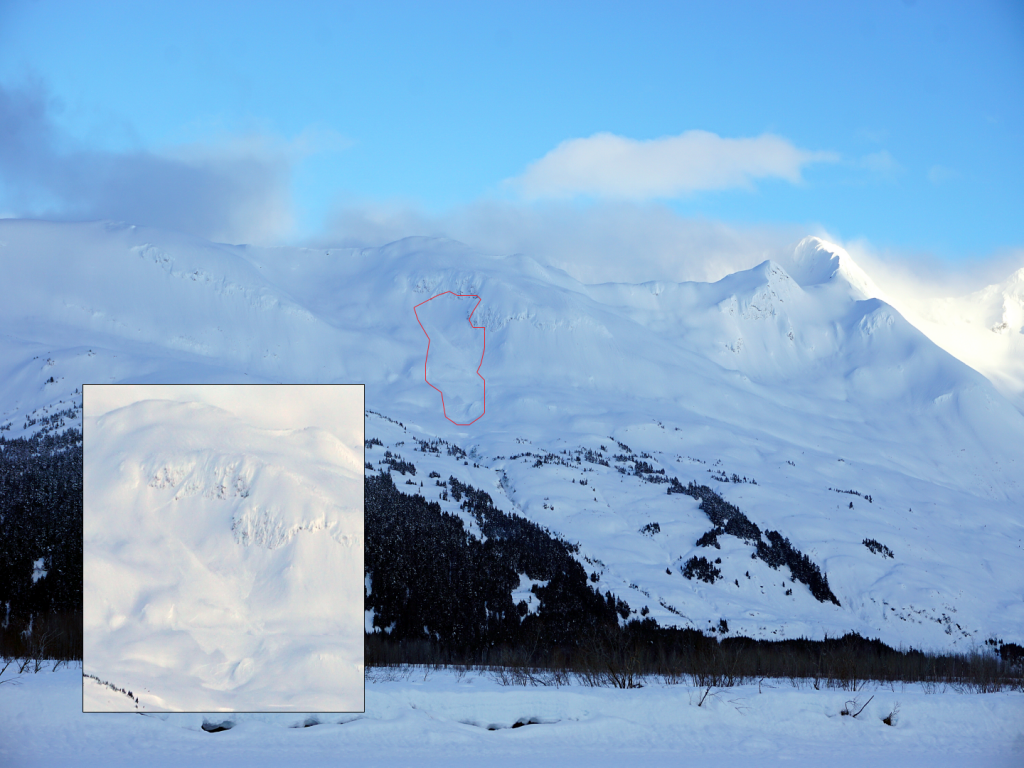 Natural slab avalanche on a SW aspect seen from the Placer Valley (the Skookum Valley is just to the looker’s right). 2.8.22.

After another round of snow and wind last night, a break in precipitation and clearing skies are forecast for later today and tomorrow. Last night Girdwood and Portage Valleys saw 4-8″ of low density snow while Turnagain Pass and the interior Kenai only squeaked out 1-2″. The ridgetop winds, however, remained strong in most areas, blowing 20-30mph with gusts to 50 from the east. Although the winds are decreasing this morning, they are slated to turn westerly and increase through today (15-25mph) and into tonight (30-40mph) with stronger gusts. All that said, wind slabs will be our main avalanche concern.

The wind effect above treeline in the new snow from Monday night was significant. Large drifts, scoured ridges and wind slabs that look to be in the 1-2+’ deep range covered much of the upper elevations, only to be exacerbated by last night’s winds. Even though we didn’t see much natural avalanche activity yesterday, we also didn’t see much terrain in general. Paying close attention to the basic Red Flags will be key for anyone getting out today. Those are:

Overall, it will be a good practice to be suspect of all new wind slabs and ease into terrain with a conservative mindset. 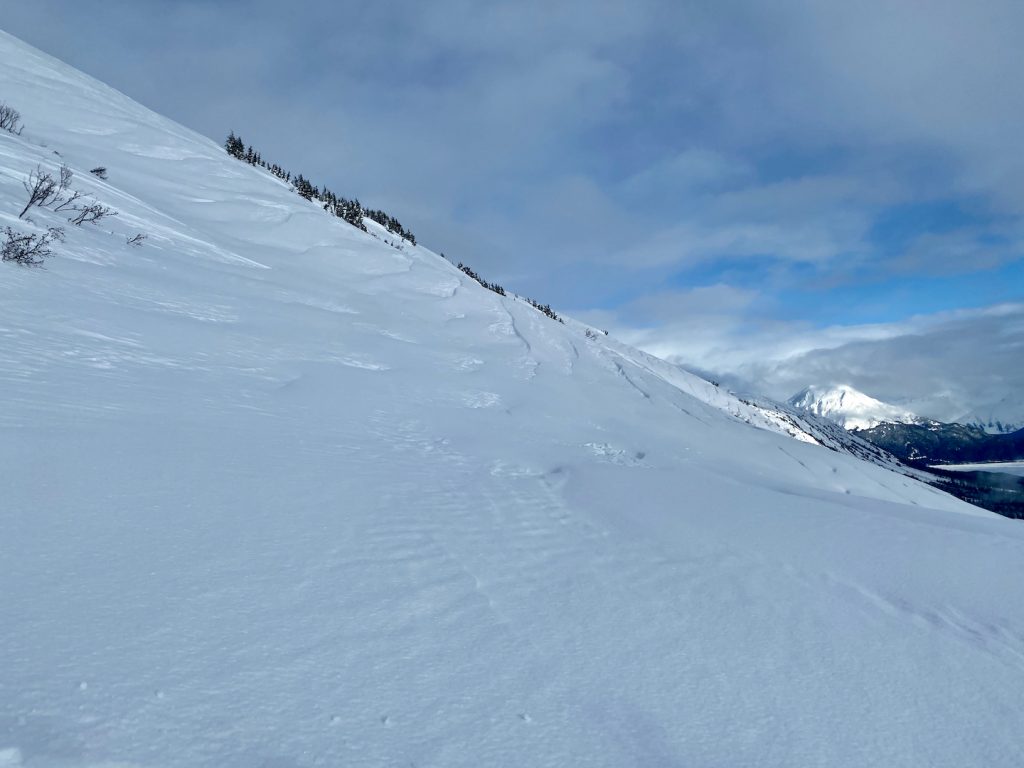 Wind effect at the top of Treeline on a SE face of Seattle Ridge, looking north. 2.8.22. 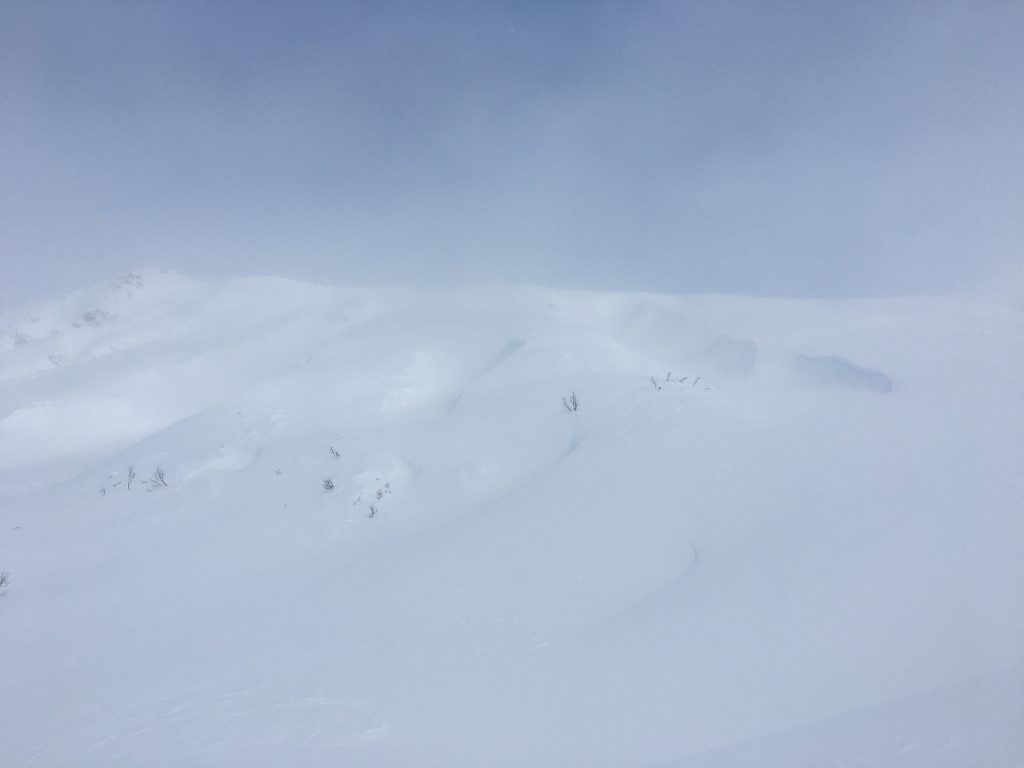 More wind effect, this is on the southerly aspect of Cornbiscuit. 2.8.22.

In areas and on slopes that escaped the wind, keep an eye out for how much storm snow fell in the past couple days. Are there any red flags that tell you it hasn’t fully bonded? Quick hand pits are good tools for this. Also, watch for sluffing in the new snow on the steeper slopes out of the wind.

Cornices:  With the chance for skies to clear and travel along ridgelines doable, we have to give cornices an extra wide berth. These have changed shape and grown over the last couple weeks and could be teetering close to failure.

Yesterday:  Stormy weather continued most of yesterday despite a brief break midday with some clearing skies. Snowfall over the past 24 hours was 1-2″ for Turnagain Pass and Summit Lake while Girdwood and Portage Valleys saw closer to 3-5″ (most of which occurred last night). Ridgetop winds have averaged in the 20-30mph range with gusts near 50mph from the east, these also were strongest overnight. Temperatures have cooled to the mid 20’s at sea level and the teens in the Alpine.

Today:  A break in weather is forecast today as the system over us moves out. After a few snow flurries this morning, there is a chance for some clearing skies. Ridgetop winds are expected to turn westerly and pick up into the 15-25mph range and increase into the 30’s later tonight. This will bring in colder air, dropping temperatures to the teens at most locations by this evening.

Tomorrow:  Mostly to partly cloudy skies are forecast with the chance for a few snow showers (only a trace of accumulation). The strong westerly winds along ridgelines should start backing off midday before turning easterly tomorrow night ahead of yet another pulse of wind and precipitation for Thursday night into Friday.