The avalanche danger remains CONSIDERABLE above 1,000′. Triggering a large and dangerous slab avalanche 2-3′ thick remains likely and continued cautious route-finding and conservative decision making is essential. These slabs are sitting on weak faceted snow and could be triggered from below, the side or along the ridge. They can be triggered on wind loaded slopes as well as slopes in the trees without wind loading. We are in a period that our guard needs to remain up!

*Roof Avalanches:  Warming temperatures are causing roofs to begin to shed their snow. Pay attention to children, pets and where you park your car.

‏Chugach State Park:  An avalanche caught and carried a skier in the Eagle River area on Tuesday. That report and others sent in from this region can be found HERE.

TONIGHT!  Avalanche Gear in Review with CNFAIC at Black Diamond.  Swing by Black Diamond in Anchorage for a discussion on avalanche rescue gear. Thursday, Feb 6th from 6-7:30pm. Free! CNFAIC forecaster Ryan Van Luit will be there to discuss advances, common mishaps and answer any questions you may have about your own rescue gear. BYOG – Bring Your Own Gear! This is a great opportunity to test your gear and ask questions.

Over the past two days we know of 6 skier and/or snowmachine triggered slab avalanches from Girdwood, Turnagain Pass and Summit Lake. They have all been around 2′ thick. One triggered yesterday in the upper Girdwood Valley was just over 3′ thick. No one has been caught to date and several have been triggered remotely. All of these are failing on weak faceted snow 2-3′ below the surface. Many are being triggered in the mid-elevation band around 2,000′ and outside of wind effect. 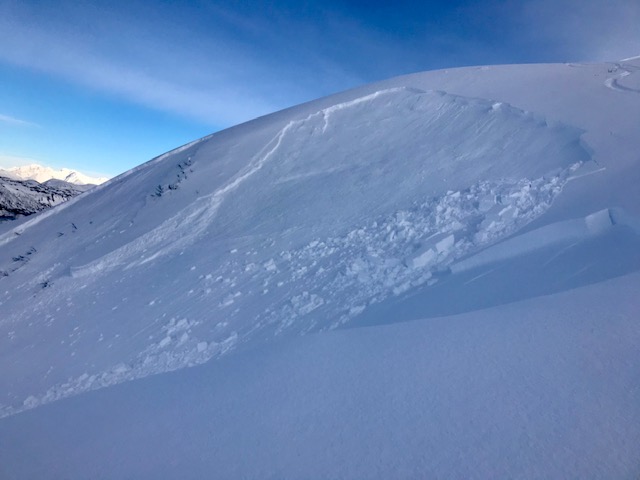 Slab avalanche triggered Tuesday, Feb 4th. This slide was triggered at the crown and below the common skin track when a skier veered below the track to perform a stability test. Photo taken the day after on 2.5.20 by Jennifer Dematteis. 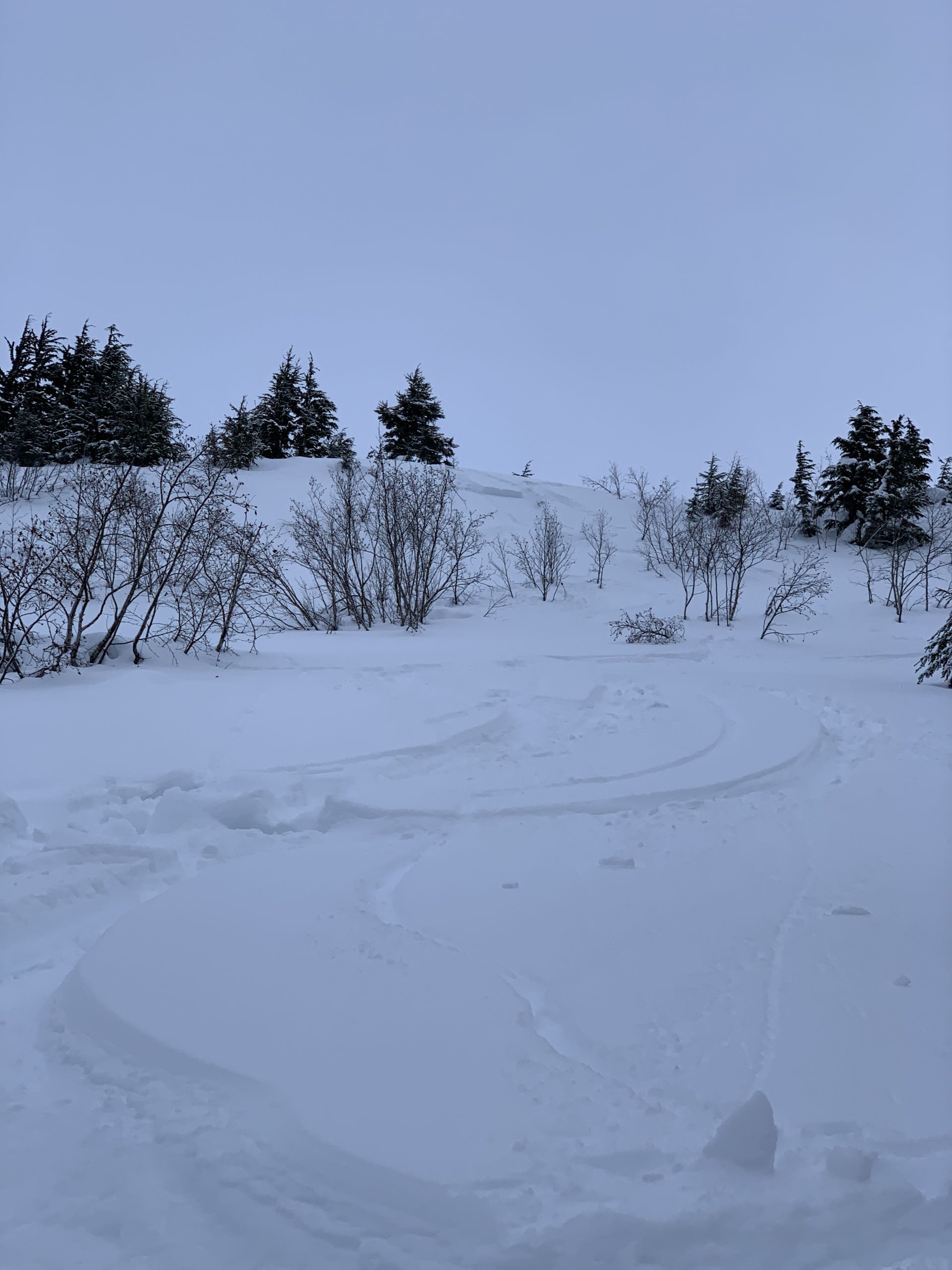 Slab avalanche triggered by second person on the slope. This is an example of slabs that are releasing in mid-elevation terrain and in the trees. Location: Pete’s North. 2.4.20. Photo: Leif Mjos

Triggering a dangerous slab avalanche that is large enough to bury, injure and kill a person remains likely. These slabs continue to release the minute folks venture off the beaten track and especially into areas that were not heavily trafficed in January. There was a bump in westerly wind last night, which could create some small wind slab issues in isolated areas today, but the main concern still lies deeper in the pack.

That said, we can’t let the clearing skis today sway our decisions in the backcountry. We are dealing with an unstable snowpack in the lower/mid elevations as well as the upper. Widespread collapsing (whumpfing) and several recent avalanches are clues we can’t ignore. The problem is, various weak layers of facets and buried surface hoar sit between 2-3′ below the snow surface. The slab on top is composed of either wind packed snow (wind loaded slopes) or settling and condensing snow due to the very warm temperatures. Either way, the slab on top of the weak layer(s) is showing it’s prime to avalanche and all slopes are suspect.

Some things to remember with this kind of avalanche problem: 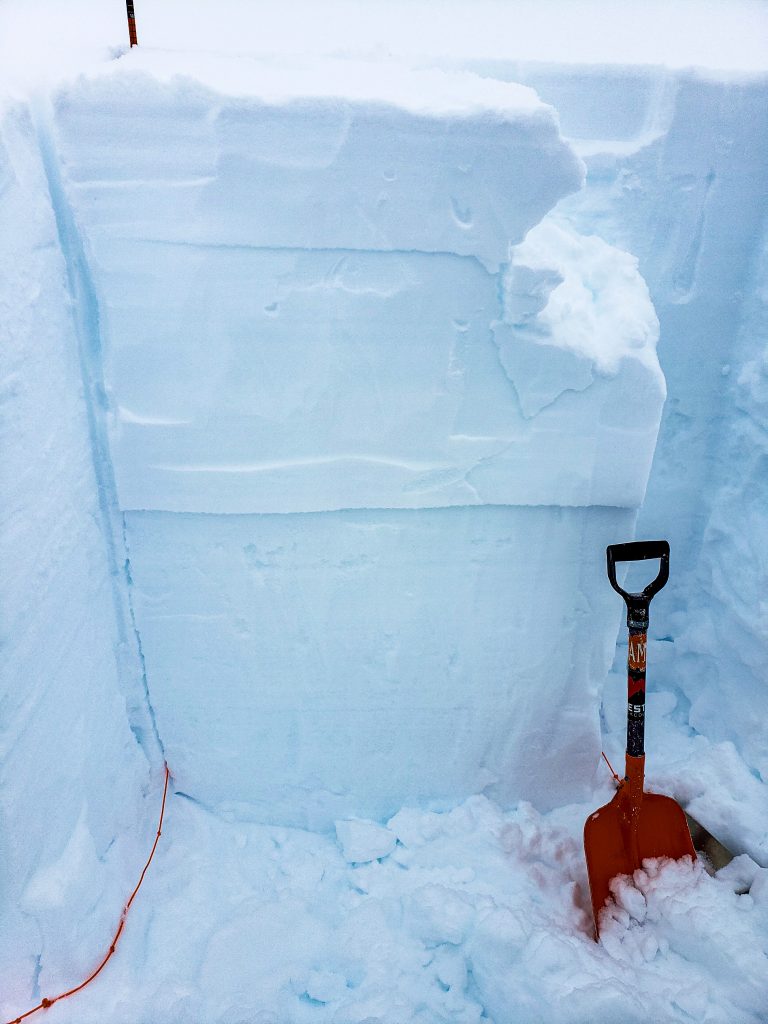 This pit from Eric Roberts around 2,500′ on Eddies shows a failure just over 2 feet below the surface on buried surface hoar. The failure near the top of the snowpack is a shallow wind slab. The deeper weakness is clearly the more concerning in our situation now.

Yesterday:  Mostly cloudy skies were over the region yesterday. Temperatures were warm, in the mid 20’s°F along ridgetops and near 30°F in the mid and lower elevations. Ridgetop winds were light from the west (5mph) before picked up slightly overnight to the 10-15mph range.

Today:  Mostly clear skies are forecast before another system pushes in tonight. Ridgetop winds should continue to blow from the west in the 10-15mph range before turning easterly tonight and increasing to the 15-25mph range. Temperatures are expected to stay in the mid-20’s°F with lower elevations bumping up to near 30°F during the day. Snowfall overnight could accumulate to 1-2″ by tomorrow morning.

Tomorrow:  Cloudy skies, cooler temperatures and light snowfall is expected before a large storm system heads into the region Friday night and into Saturday.

*Rime is covering parts of the Seattle Ridge wind sensor.