The avalanche danger is CONSIDERABLE above 1000′, and it is likely a person can trigger an avalanche a foot deep or deeper on recently wind loaded slopes, with natural avalanches possible. Winds started ramping up last night and will be blowing 15-30 mph with gusts of 35-50 mph through the day, making dangerous avalanche conditions. Cautious route-finding will be essential today, which means avoiding steep terrain near ridgelines, convex rolls, and in gullies. The danger is MODERATE below 1000′, where slopes will be slightly more protected from winds but human triggered avalanches will still be possible on wind-loaded slopes.

Turnagain Pass: There was only one new avalanche reported yesterday, which looked to have failed early in the morning or on Thursday night. It was a natural avalanche on a southwest-facing wind loaded slope at 4000′,  just to the east of Pastoral. There was another avalanche in the same bowl that looked to be a few days old. 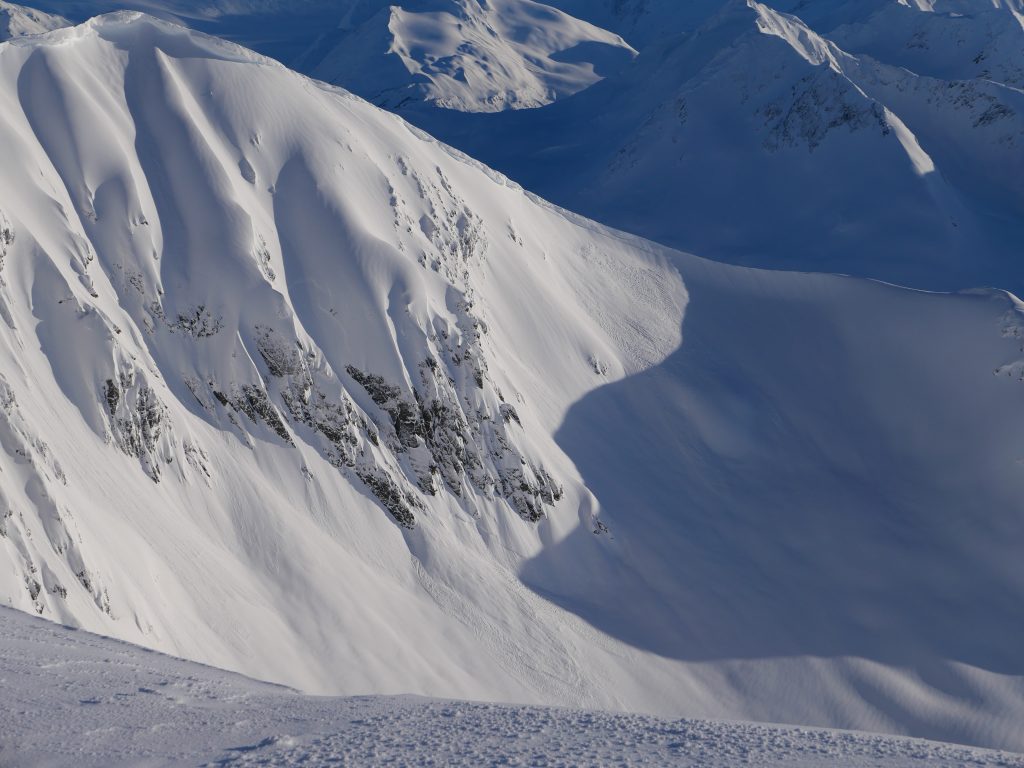 Recent natural avalanches in the alpine near Pastoral. The avalanche on the right looked to be fresher than the one on the left, and likely occurred within the past 24 hours. 02.04.2022

Well it looks like most of this round of snow is going to miss us, but the winds have already found their way into the area. Winds began ramping up last night, blowing 15-20 mph out of the east with gusts of 35-40 mph. We are expecting to see that trend continue through the day, with sustained easterly winds at 15-30 mph and gusts of 30-50 mph. The snow totals are looking meager in our advisory area, with 1-2″ possible in Girdwood, a trace to an inch in Turnagain Pass, and 3-5″ in the Portage and Placer Valleys. With the strong winds and low snow totals, the main issue to focus on will be fresh wind slabs that began forming last night and will continue to grow during the day.

Human-triggered avalanches will be likely with natural avalanches possible on steep, wind loaded slopes at and above treeline, and they are expected to get big enough to bury a person. Even though we are not expecting to get much new snow today, there is already plenty of snow on the ground that is ready to be blown into sensitive slabs. The middle elevations between 1000′ and 2500′ that remained sheltered during the most recent wind event will have the most slab-building ammunition, but strong winds at ridgetops will be able to find some soft snow to work with. Be cautious around steep slopes near ridgelines, on convex rolls, and in gullies, as these will be the most likely terrain features to harbor fresh slabs. As always, be on the lookout for warning signs of unstable snow like shooting cracks, collapsing, and fresh avalanche activity. We are still tracking multiple crusts buried in the upper 2-3′ of the snowpack. For now it appears they have gone dormant, but it is an issue to keep in mind as the snowpack sees more loading today.

Cornices: This round of strong winds will once again be at work making large cornices even larger. Keep plenty of space from the edge as you travel along ridgelines, since these are notorious for breaking farther back from ridgelines than expected. As winds continue blowing today, it will also be important to limit time spent traveling below cornices, since they may break naturally and have the potential to trigger wind slabs forming below. 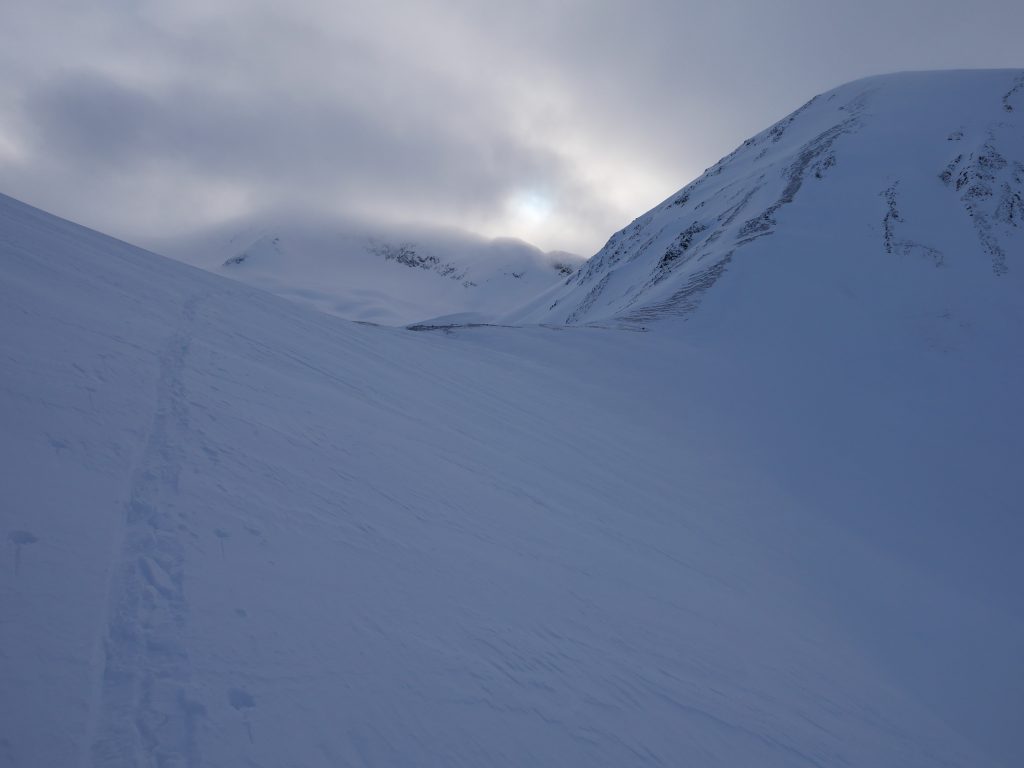 Wind scouring on Taylor pass, with a textured, wind-loaded surface in the foreground. 02.04.2022

Click HERE for a link to the video below describing the snowpack near Pastoral if it doesn’t load in your browser.

Yesterday: The day started with clouds, but skies cleared throughout the day with mostly sunny skies in the afternoon. Winds were calm with variable gusts for most of the day, until they started picking up to 15-20 mph yesterday evening around 9 p.m. Temperatures were in the upper teens to low 20’s F for most of the day, and warmed overnight to the upper 20’s to mid 30’s F. There was no precipitation during the day, and weather stations are picking up a trace of snow this morning.

Today: Easterly winds are expected to continue to ramp up today, with sustained speeds of 15-30 mph  with gusts of 30-50 mph. It is looking like Girdwood could see 1-2″ of snow during the day, with a trace to 1″ at Turnagain Pass and 3-5″ in the Portage and Placer valleys. The snow line should stay around 600′. High temperatures are expected to stay in the upper 20’s to mid 30’s F during the day under mostly cloudy skies with some pockets of sun poking through.

Tomorrow: Winds are expected to shift back to the northwest late tonight, dropping back down to 1-5 mph. Overnight low temperatures should be in the mid to upper 20’s F, with daytime highs in the upper 20’s F. We might see a trace of snow before this system breaks up. Skies are looking to be mostly cloudy again tomorrow, with some pockets of sun possible. Expect to see another round of active weather early next week, with more precipitation possible starting Monday night.