The avalanche danger is MODERATE above 1000′ today. Human triggered avalanches up to 2′ deep in areas with lingering wind slabs from yesterday’s strong winds are possible. We recommend identifying and evaluating wind loaded features by looking for signs of wind transport on the snow surface, pillows of freshly deposited snow on leeward aspects, and shooting cracks or hollow feeling snow.

Below 1000′ the avalanche danger is LOW. Warm temperatures yesterday created wet snow conditions on the surface which will likely freeze into a crust and make avalanches unlikely as temperatures start to drop today. 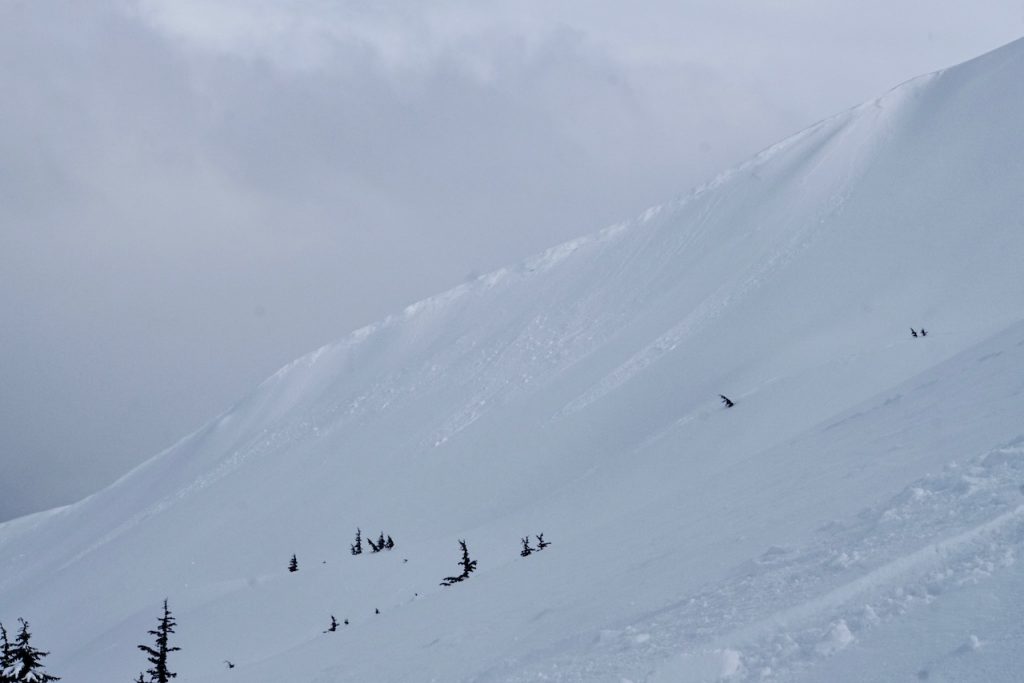 Example of small wind slabs and cornice fall avalanches from Tincan Common. Very similar avalanche activity along the steeper parts of the ridgeline leading to the upper face of Eddies. Photo from Andy Moderow 2.5.22 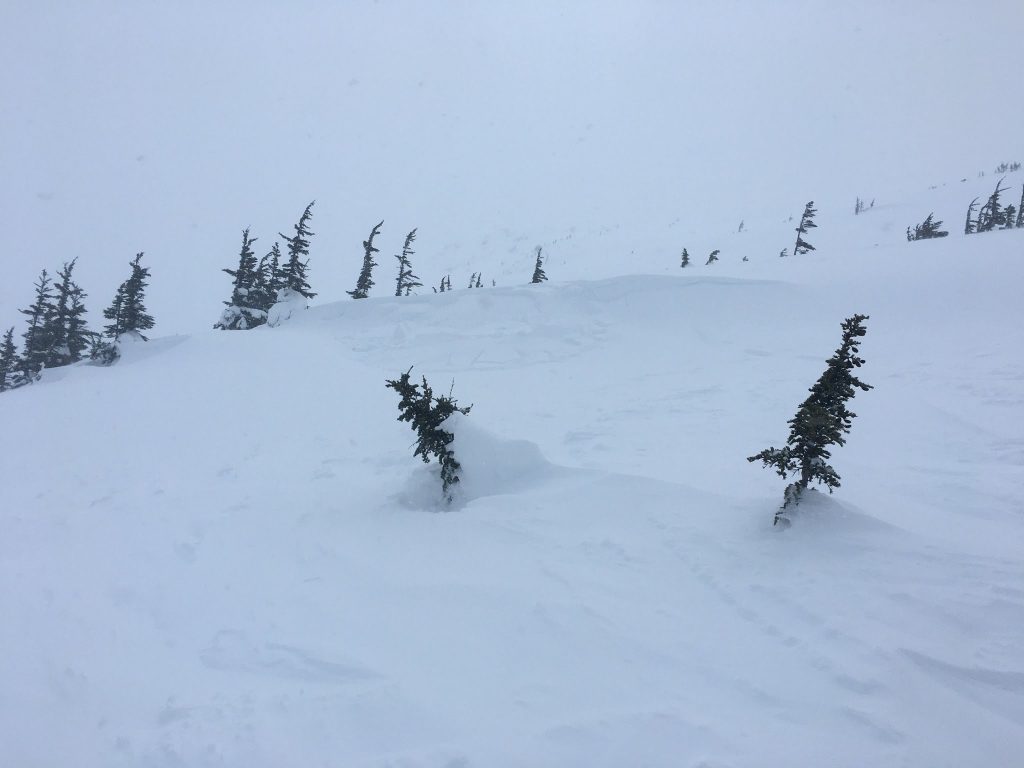 There is currently a low pressure system hanging out in the Gulf of Alaska but it is located too far east and the snowfall is mostly impacting the big mountains of the St Elias and Fairweather ranges and leaving us out of the fire hose for the time being. Unfortunately, it looks like that low pressure system will still provide a source for low level clouds which could make visibility the main weather challenge today. That said, the cloud cover was patchy yesterday and we had periods of good visibility mixed in with overcast and obscured conditions in Turnagain Pass. Winds are expected to be light out of the NW at 0-10 mph with a trace of snowfall possible. The main concern for avalanches will be lingering wind slabs up to 2′ deep from yesterdays winds, which blew for about 24 hours with averages from 15-25 mph and gusts up to 40-50 mph at ridgetops.

Human triggered avalanches are possible today so we recommend being on the lookout for shooting cracks, hollow feeling snow, and wind eroded snow or cornice buildup to identify locations with fresh wind slabs. Small test slopes can be a great way to suss out whether wind slabs are reactive in your area before entering larger terrain features. As mentioned in the ‘recent avalanches’ section above, wind slabs were much more reactive in the Girdwood area yesterday compared to Turnagain Pass. With avalanches propagating up to 100′ wide, one avalanche that was remote triggered, and anther one that was big enough to fully bury a person. Conditions will likely be less reactive today as the wind slabs have had some time to adjust, but it is worth being on guard until you test how sensitive the conditions are in the area you are travelling. Finally, there are a few layers of buried crusts in the top 2-3′ of the snowpack that we have been monitoring as potential weak layers but we have not seen activity on either layer since last weekend.

Cornices: Strong winds yesterday will have added a new load to the already large cornices along upper ridgelines and could be sensitive to human triggers today. 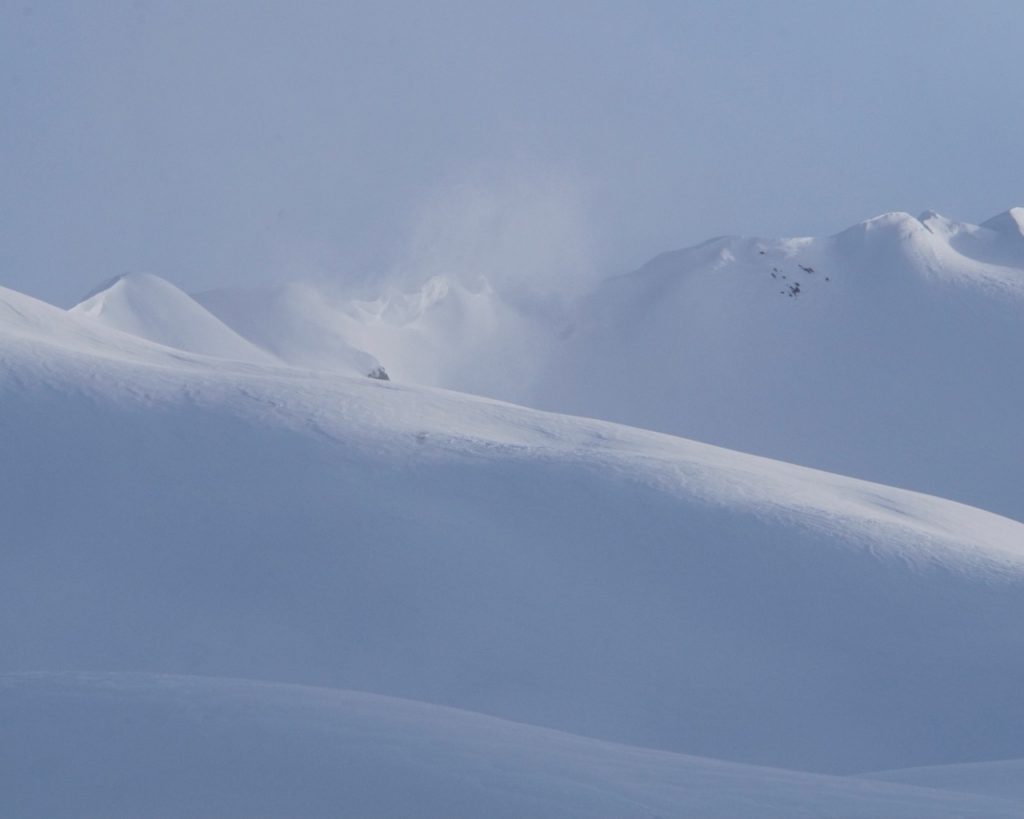 The Hippy Bowl cornice on Tincan Common was growing during the strong winds yesterday, along with the rest of the large cornices lurking on upper ridgelines. Photo Andy Moderow 2.5.22 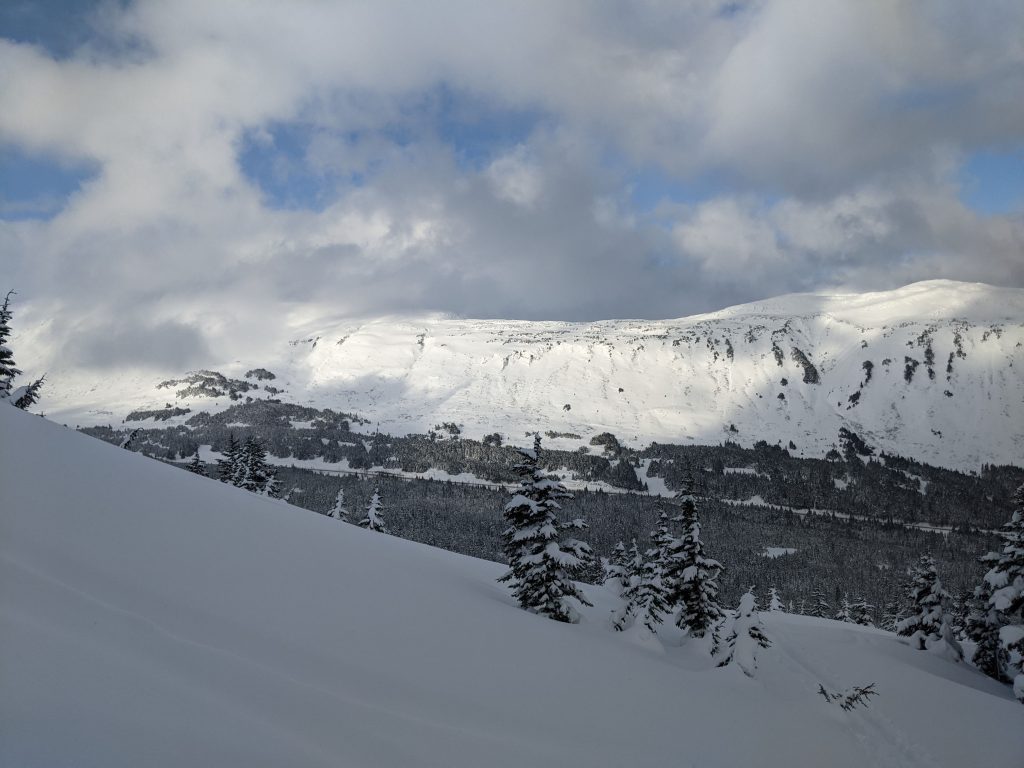 Yesterday: Moderate to strong winds throughout the day yesterday which started to taper off after midnight. Snowfall started consistently in the afternoon in Turnagain Pass with 0.2″ of water, Girdwood had just 0.1″ of water. Temperatures were in the 30s at lower elevations and 20s at ridgetop elevations.

Today: A calm day as far as winds and snowfall today with a trace of snow accumulation possible. Temperatures started to drop overnight and should be in the 20s today. Visibility may be the most challenging thing today, with mostly cloudy conditions expected.

Tomorrow: Monday looks similar to Sunday, with slightly stronger winds and cooler temperatures. Starting on Tuesday through Thursday morning we could get back into a flow with more snowfall coming to our area, but we will have to wait and see what the weather models say when we get closer.