The avalanche danger is MODERATE today above 1000’. Triggering a slab avalanche on a layer of weak snow, buried 1-2’ deep, is possible in steep terrain that has seen prior wind effect. Assess the snowpack as you travel, identify areas of concern and evaluate terrain consequences. In addition, give cornices a wide berth, limit time spent under glide cracks and watch your sluff.

SUMMIT LAKE: This area was more impacted by the recent NW wind event. Observers saw natural wind slab activity on Colorado Peak on Monday, including an avalanche that stepped down to the ground.

Am I traveling in terrain that is harboring a slab over a buried weak layer? This is the question of the day. With the few inches of low density snow that fell overnight it will be harder to see evidence of prior wind-loading. While typical wind slabs generally heal soon after a wind event. When the slabs form over a persistent weak layer, like surface hoar or facets, they can become a persistent slab issue. This is unfortunately what we are dealing with now. A weak layer of surface hoar and near surface facets was buried last week by 4-18″ of snow.  The most snow (12-18″) fell in Placer, Portage and Whittier with much smaller amounts (4-6″) at the southern end of Turnagain Pass and to the north in Crow Creek. Girdwood and the northern end of the pass got 8-12″.  The snow was followed by light to moderate winds which formed wind slabs in some terrain and there were a number of human triggered avalanches reported over the weekend. While the weak layer may be found on most slopes in the area, the wind effect was variable. The key factor to determining stability today will be whether the wind formed a slab of stiffer snow above the weak layer or not and how deep is the slab. Ski and track penetration and snow stiffness will help answer these questions. Is the snow loose and sugary or stiff and maybe supportable? The most suspect areas are loaded slopes at higher elevations.  Remember there was loading from a variety of directions as winds shifted from east to west. Avoid steep terrain with stiffer snow and look for signs of instability like cracking, whumpfing. On the flip side, keep in mind that signs of instability may not be present as time passes with a persistent weak layer in the snowpack. However, the potential to trigger an avalanche will still be there. There is lots of fun, soft snow to enjoy in non wind affected terrain.

Loose snow avalanches (sluffs): Sluffs are likely to be high volume and fast running. They could entrain the new snow as well as the facets that sit below it and could have serious consequences if they carry you into terrain traps like cliffs, trees, or rocks.

Cornices: Large cornices are peeling away from ridgelines and cracks are opening. Be sure to give them plenty of space along the ridge and minimize the amount of time you spend below them. 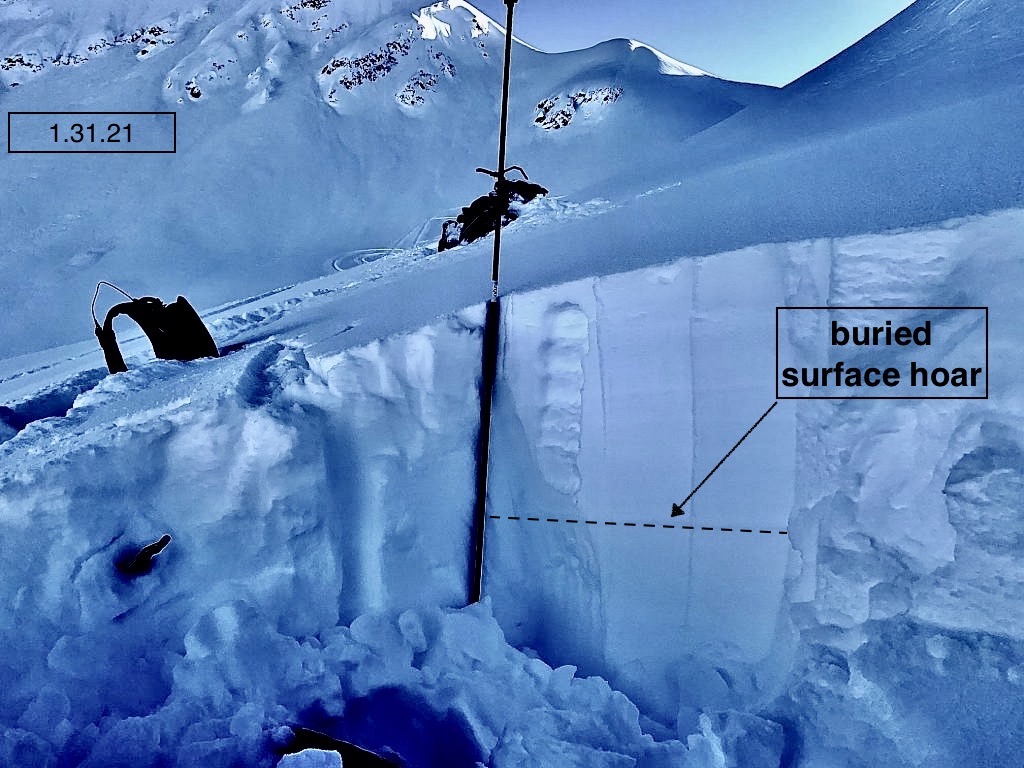 Snow pit near the Squirrel Flats uptrack on Sunday, 1.31.21. The buried weak layer was easy to spot but the snow above wasn’t quite stiff enough to be a slab yet. Photo: Graham Predeger. In places with wind effect there is a slab over the buried weak layer. 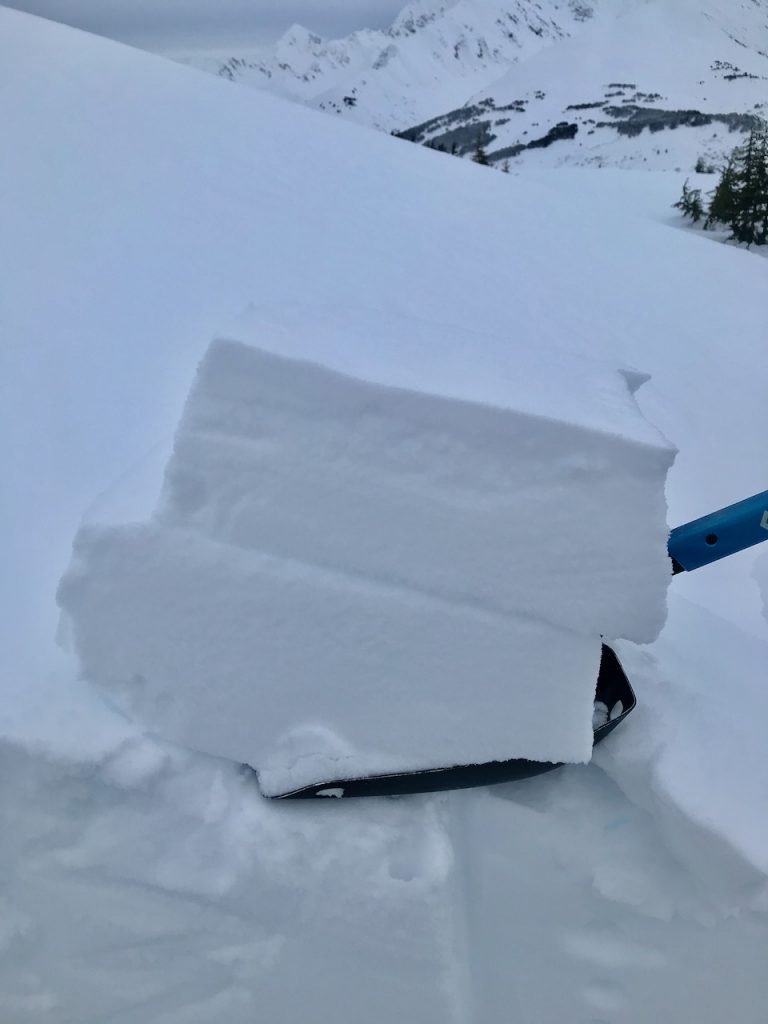 Yesterday: Skies were overcast and temperatures climbed from the single digits to the mid teens as the day progressed. Winds were calm becoming easterly and light overnight. Light snow showers started in the early evening and continued overnight with 1-2″ of accumulation to sea level.

Today: Skies will be mostly cloudy in the morning becoming partly sunny in the afternoon with some valley fog possible.  Temperatures will be in the high teens to mid 20°Fs and winds will be light and westerly. Overnight skies will be partly cloudy with temperatures in the teens to single digits and light west winds continue.

Tomorrow: Mostly sunny skies with temperatures in the teens and mid 20°Fs and light NW winds. The next shot of snow looks to be Friday into Friday night.