The avalanche danger remains MODERATE at elevations above 1,000′. A few inches of new snow with moderate winds will make wind slab avalanches possible to find and trigger today. These will be more predominant in Alpine terrain and could be up to a foot deep where winds have loaded slopes and cross-loaded steep gullies. Additionally, give cornices a wide berth, watch your sluff, and avoid being under any glide cracks that may be opening up.

The avalanche danger is LOW below 1,000′ where a few inches of snow sits on a stout crust.

After some hope that the low pressure in the Gulf would bring the mountains a foot of new snow today, that is turning out not to be the case… Instead, we are slated for 2-4″ of snow with moderate ridgetop easterly winds. The good news however, it remains cold enough for snow to sea level and those lakes and marshes are continuing to freeze up. That said, it’s another day where wind slab avalanches are the primary concern.

If you’re headed out, keep a lookout for any past or active signs of wind loading. Winds were blowing 15-20mph yesterday and lingering slabs may be found with or without fresh ones today. Watch for smooth rounded and pillowed snow surfaces, stiff snow over softer snow and any cracks that shoot out from your machine, board or skis. Quick hand pits are also a great way to assess wind slabs and if they want to slide easily (meaning they are unstable). Although new snow amounts are small, there is enough old loose snow available to be blown into fresh slabs. Add to this, wind slabs are likely to be sitting on loose faceted snow and buried surface hoar in places where the winds have not knocked it down. Exposed areas above the trees and in the Alpine are where this issue is most prevalent.

Loose snow avalanches (sluffs): On slopes out of the wind, expect a few inches of new snow over soft loose faceted snow. Skiers and riders have noted sluffs on steep sustained slopes increasing in volume over the past several days as the old surface has weakened with the chilly temperatures and clear skies.

Cornices: As you’ve seen recently on our reports, cornices are big and starting to peel away from ridgelines, creating cornice crevasses if they don’t break off. Just another mountain hazard to keep an eye on and another reason to give cornices a wide berth and limit time under them. 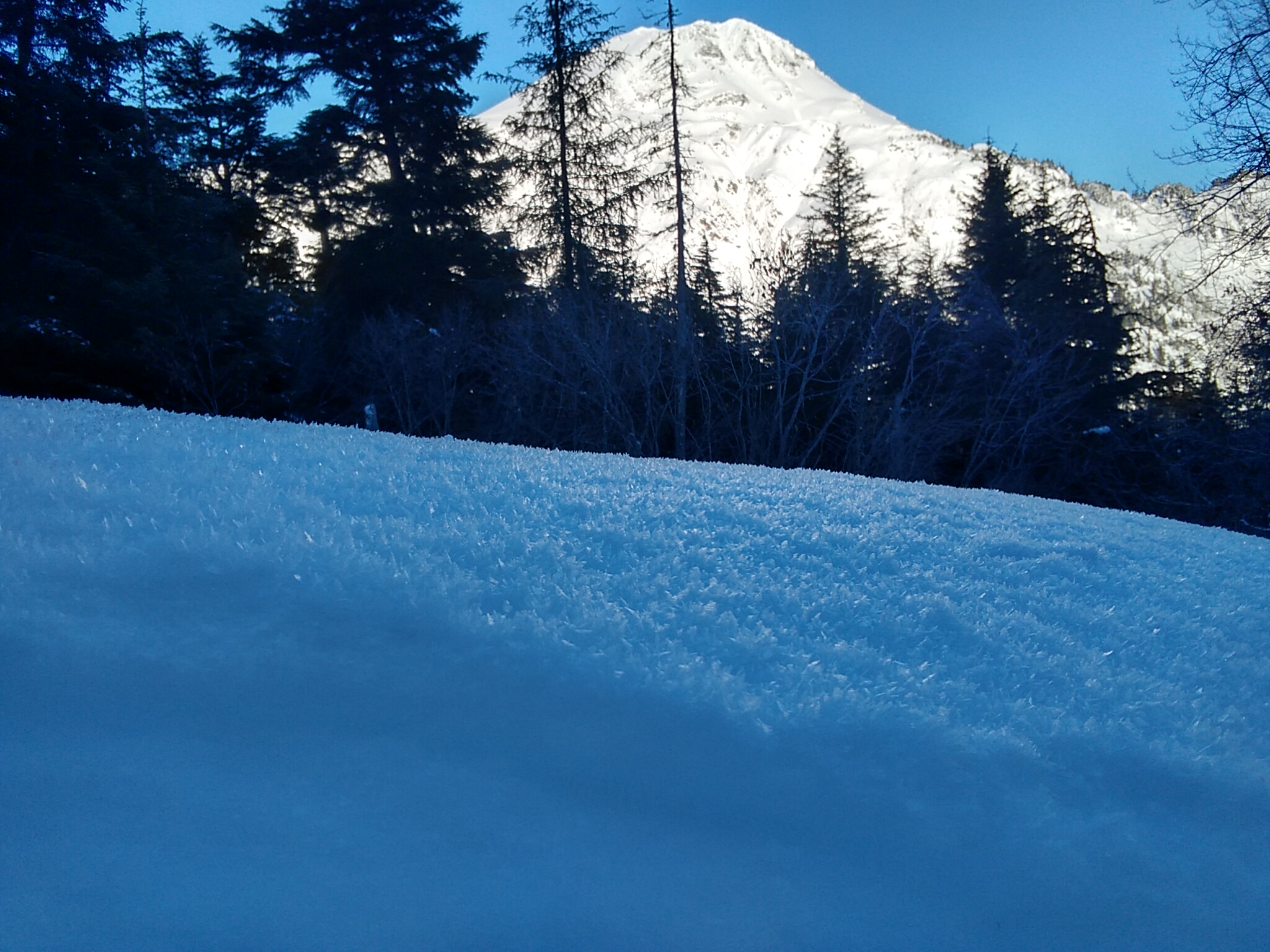 Photo of the surface hoar that sits over the loose faceted snow from a couple days ago. This is the old surface that is now being slowly covered by several inches of new snow. This set-up exists all the way to ridgetops. 1.26.21. Photo: Alex McLain.

Keep a lookout for glide cracks and avoid being under any of them. They have been releasing in a few areas around the region and we are beginning to notice some cracks open in areas that folks can easily travel below; on the road side of Seattle Ridge (across the parking lot) and on the Eddies, Tincan and Manitoba SW faces. These things are completely unpredictable and slide off in small chunks or large avalanches. It seems each clear day we see another crack or two, so we know they are on the move. Please shoot us a note if you see any! 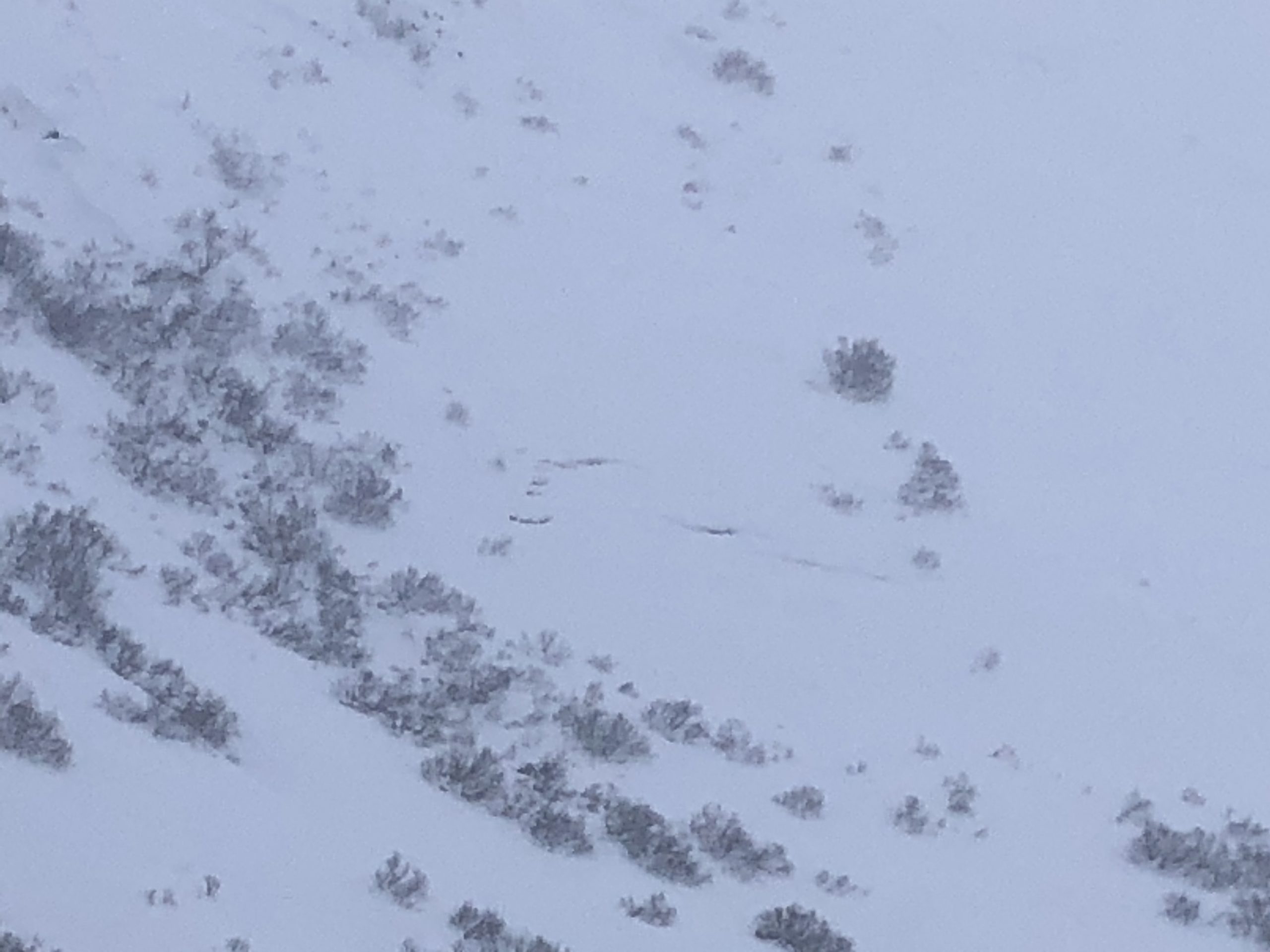 Glide cracks on the South aspect of Manitoba in the Summit lake area. 1.28.21. Photo: Matti Silta.

Yesterday: Mostly cloudy skies with a few snow showers were over the region. Between 2-3″ of new snow fell to sea level in Girdwood and extended to Turnagain Pass; only a trace to an inch fell in the Summit Lake area. Ridgetop winds were easterly in the 15-25mph range with gusts up to 40mph; winds have decreased overnight to 10-15mph. Temperatures were near 30F at sea level and in the teens along ridgelines.

Today: Cloudy skies and light to moderate snowfall, to sea level, is forecast during the day. Only 2-4″ of new snow is expected (.2″ water equivalent). Temperatures will be near 30F at sea level and the teens along ridgelines. Ridgetop winds will remain easterly in the 10-20mph range through tonight.

Tomorrow: Skies look to clear Saturday morning as high pressure builds over Southcentral. Winds will shift to a more north and northwesterly direction and usher in very cold air by Sunday. These winds look to remain light to moderate Saturday but may pick up by Sunday into Monday. Stay tuned.