The avalanche danger is MODERATE on all aspects above 1,000′. Triggering a lingering wind slab or a new wind slab from today’s moderate east wind, is possible. The older wind slabs are generally 1-2′ thick and could be fairly stubborn. Any new wind slab should be shallow and may only form along the higher peaks/ridges. Also, in the high elevations, there is a small chance of triggering a larger avalanche that breaks deeper in the snowpack. Lastly, be sure to give cornices a wide berth when traveling along ridgelines.

With a little sun breaking through yesterday, we saw evidence of several more natural avalanches from the storm late Sunday night into early Monday morning. These were wind slabs and cornice falls. Most wind slabs were between to 1-2′ deep and 50-200′ wide. All activity was partially/mostly covered up by wind.

There were no known slab avalanches yesterday. There were reports of some small skier triggered sluffs. 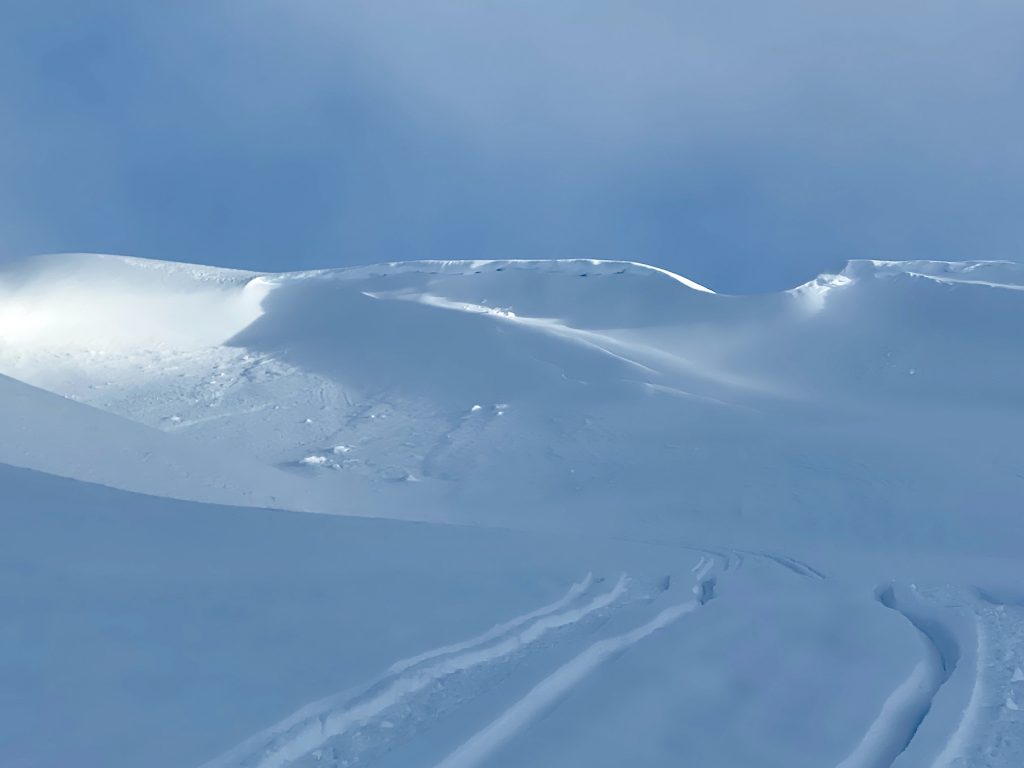 The break between storms will be ending today. With clouds already moving in, we can expect some light snow showers (trace to an inch today – to sea level) with heavier snow late tonight and through Thursday. Storm totals by Friday morning could reach up to 18″ or more at Turnagain Pass. Ridgetop easterly winds should be on the moderate side for this snow event – 15-20mph. That said, until the snow starts accumulating, the main avalanche concerns are lingering wind slabs and cornices, any new wind slabs, and the off chance a larger slab breaks deeper in the snowpack.

Lingering Wind Slabs:  Watch for signs those wind slabs formed early Monday morning might still be reactive. Look for any cracking in the snow around you and collapsing (whumpfing). Older wind slabs are in many places – near ridgelines, on rollovers, in cross-loaded gullies. The good news is, they have been showing signs of bonding and could be stubborn to trigger.

New Wind Slabs:  With the easterly winds on the rise today, watch for any area seeing active wind loading. Winds should generally be moderate (10-15mph with gusts in the 20’s) but could be strong enough to transport snow along the higher peaks and ridges.

Cornices:  As you can see in the photo below, cornices have grown and deserve an extra wide berth when traveling along ridgelines.

Persistent Slabs – avalanches breaking deeper in the snowpack:  We are still concerned there could be another large avalanche out there that breaks above the New Year’s crust – similar to the one that occurred last week on Tincan Proper. This is a hard thing to assess as many slopes are showing a stable snowpack under the wind slabs and surface instabilities. The places that are the most suspect are in the higher elevations and where the snowpack is generally thinner, either from less snowfall, or from wind scouring over the past month.

If traveling into the larger terrain today, we have to be sure to keep our good travel habits up. This means communicating concerns with your partners, easing into terrain, exposing only one person at a time, having escape routes planned, watching your partners closely, and being able to use your rescue gear if necessary. 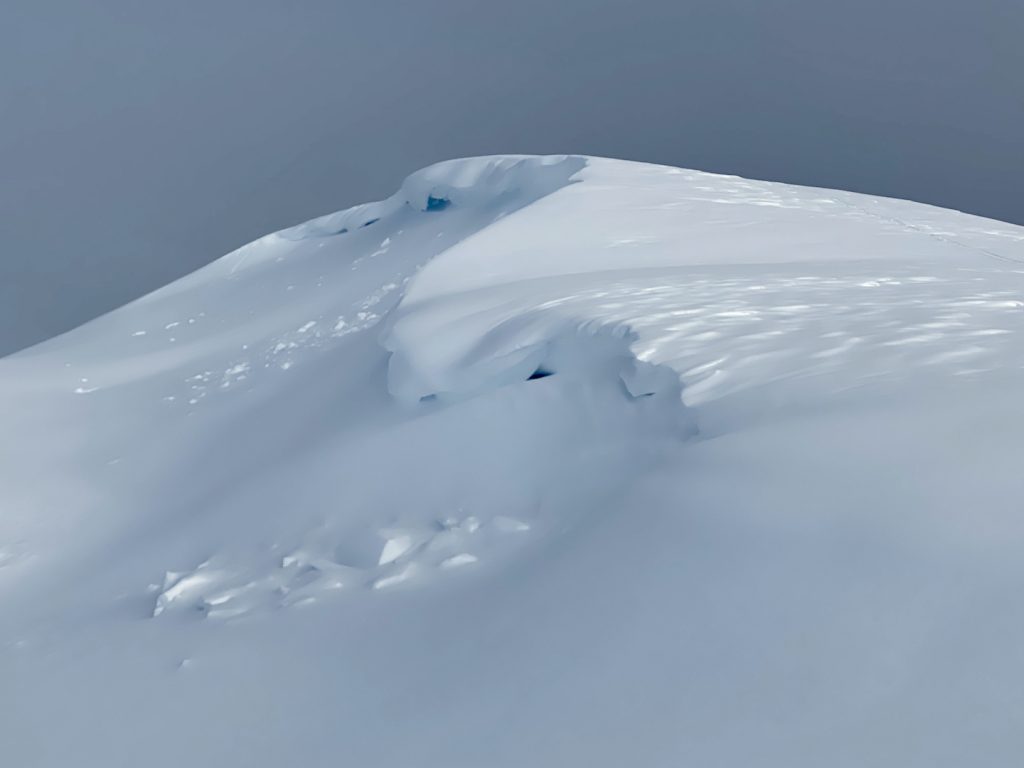 The strong winds have created some very interesting wind features, here are a couple cornices along Seattle Ridge overhanging a low angle slope. 1.25.22.

Looking ahead at this next round of storms, here is a quote from the NWS Recreation Forecast:  “Continual light to moderate snow is likely late Wednesday through Friday. Totals of 1 to 3 feet are possible, with higher end of that expected east of Girdwood. Winds will remain light, generally out of the east.” I’m willing to bet most readers of this advisory would be happy for some snowfall with winds on the lighter side. 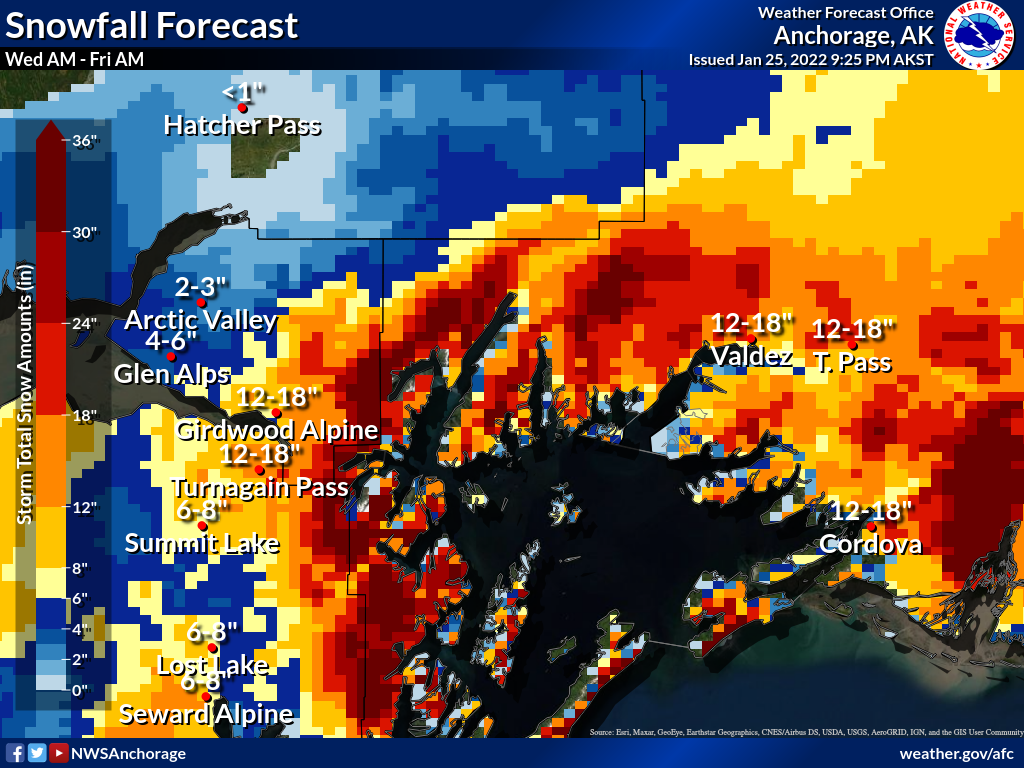 Yesterday:  Cloudy/foggy skies transitions to more broken skies with some sunshine in the afternoon. A spurt of heavy snowfall occurred in the morning adding 1-3″ of new snow. At Turnagain Pass, a light freezing drizzle followed the snowfall. Ridgetop winds were light from the west and temperatures cooled from the 30’sF to the 20’sF through the day.

Today:  Cloudy skies and light snowfall (to sea level) is expected through today with heavier snowfall late tonight as the next storm rolls in. Accumulation of an inch today and 3-5″ overnight. Ridgetop winds are forecast for 10-15mph from the east today, increasing to 20mph tonight. Temperatures should remain in the 20’s at most locations.

Tomorrow:  The brunt of the storm looks to hit Thursday with heavy snowfall, 8-12″, and a rising snow/rain line to ~500′. Ridgetop winds remain moderate, 15-20mph from the east. Snow looks to continue into Friday and possibly the weekend. Temperatures should climb into the 30’s at the elevations on Thursday, but fall again into Friday.