The avalanche danger is CONSIDERABLE above 1000′ today. Snowfall and moderate winds will build wind slabs up to 2′ deep that are likely to be triggered by a person and possible to produce natural avalanches. In protected areas the 8-16″ of new snow forecast from last night through tonight could produce storm snow avalanches at the interface with the old snow surface. These storm slabs may become more likely to trigger later in the day as the new snow starts to pile up.

Below 1000′ the avalanche danger is MODERATE. The snowline was at sea level overnight but could rise up to 700′ during the day today.

Today will be yet another storm day, with moderate rates of snowfall throughout the day and light to moderate winds. The forecast is for 8-16″ of snowfall from last night through tonight with another 8-16″ on tap from tonight through Friday night. As of early Thursday morning the snowfall seems to be favoring Girdwood, with 8″ of new snow at 1700′ on Alyeska at 6am. If Turnagain Pass doesn’t get as much snowfall as is forecast then the depth of winds slabs will be lower and potential for storm slabs will be less likely. Snowline could get up to about 700′ during the day, but so far snow has been falling to sea level. This relatively tame storm will be a welcome change from the high winds and heavy wet snowfall we have received over the past week.

Wind Slabs: Despite the calmer winds in comparison to recent storms, we still expect wind slabs are forming in exposed areas especially at upper elevations. Human triggered avalanches up to 2′ deep will be likely and natural avalanches will be possible in areas with active wind loading. To identify areas with fresh wind slabs watch for shooting cracks, pillows of wind loaded snow on leeward aspects, and signs of wind transport on the snow surface. Likely areas with wind slabs will be near ridgelines, cross loaded gullies, and along convex features at and above treeline.

Storm Slabs: In protected areas the new snow could also produce smaller avalanches up to 1′ deep at the interface between the new snow and the old snow surface. Thanks to the slow and steady rates of precipitation with this storm it may not be an issue until more snowfall accumulates, like later today and into Friday. Hand pits and test slopes are a great way to determine how well the new snow is bonding with the existing snow surface before entering avalanche terrain.

Persistent Slabs: We are still concerned with the potential for triggering a deeper avalanche that could release on a faceted layer above the New Years crust, which is buried 2-6′ deep. The distribution of the facets and the New Years crust is highly variable, so evaluating the potential for an avalanche on this layer is quite tricky. Most of our recent observations have shown that this layer is not a major concern at and below treeline but we haven’t been able to get many observations from the alpine recently. Our best estimate is that it is more likely to trigger an avalanche on this layer at upper elevations due to a thicker and stronger New Years crust and in areas with a thinner overall snowpack like the southern portion of Turnagain Pass. The consistent stormy weather this week has prevented us from seeing avalanche activity in the alpine so there is a lot of uncertainty around the likelihood of triggering an avalanche on this layer. 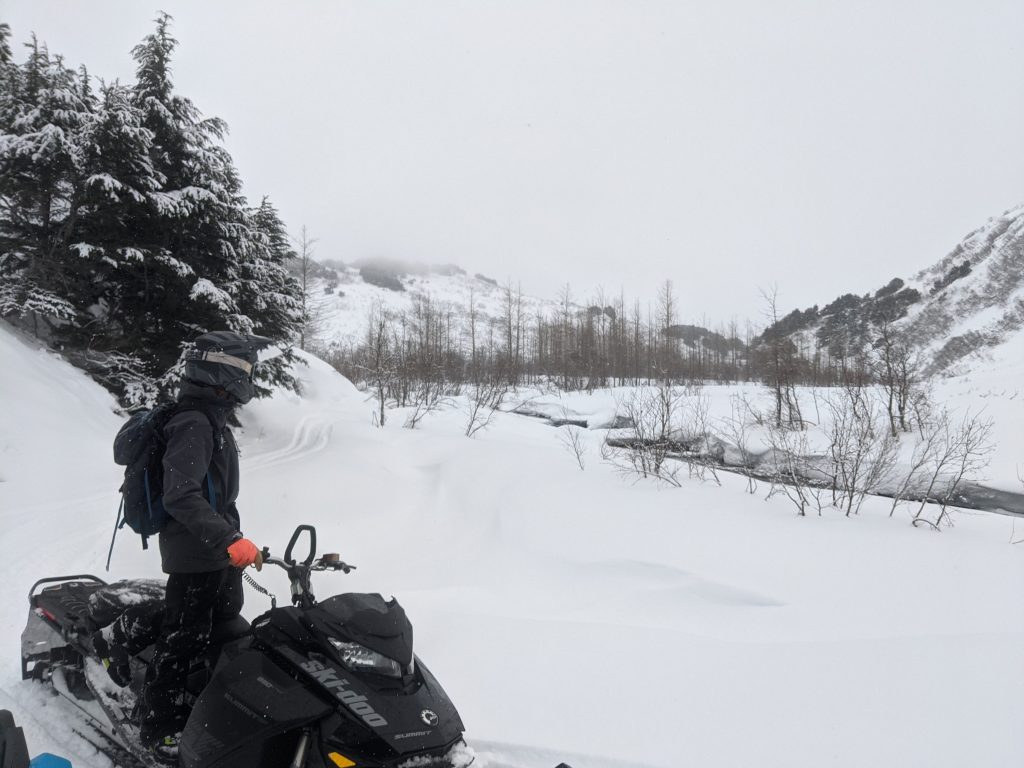 Low visibility and snowfall throughout the day yesterday, which will continue through Friday evening. Photo 1.26.22 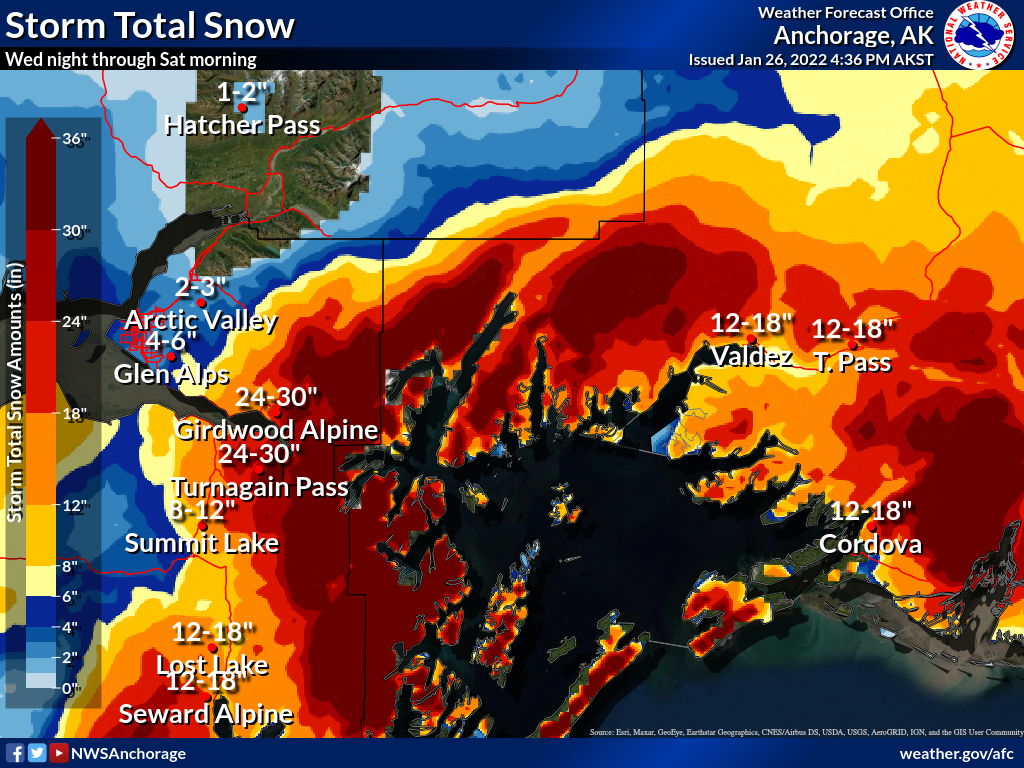 Updated snowfall totals from Wednesday night through Saturday morning, showing 24-30″ of total snowfall for Turnagain Pass and Girdwood and more for Placer, Portage, and Twentymile. Graphic courtesy of NWS Anchorage 1.26.22

Yesterday: Light snow throughout the day with minimal accumulation during the daylight hours. Heavier snowfall overnight with totals of 0.4″ of water so far in Turnagain and 0.7″ water in Girdwood. Winds were light to moderate, picking up overnight with speeds of 5-20 mph and gusts into the 30s on Sunburst. Temperatures remained below freezing to sea level overnight.

Today: Consistent moderate intensity snowfall throughout the day, with less than an inch an hour of accumulation. Total snow fall from overnight and during the day today should be in the 8-16″ range. Snow line is forecast to move up to about 700′ today. Winds should be out of the E in the 10-30 mph range with gusts possible up to 50 mph.

Tomorrow: Friday looks like a carbon copy of Thursday’s weather, with moderate intensity snowfall and moderate winds. Another 8-16″ of snowfall is forecast from Thursday evening through Friday evening. Snow line should remain between sea level and about 500′ on Friday. The weekend looks like it could provide some clearing skies and light winds to get out and enjoy the fresh shot of snow.

*Estimate based on SWE and temperatures