There is a CONSIDERABLE avalanche danger on all aspects above 1,000′. After yesterday’s storm, we can expect humans to be able to trigger wind slabs, storm slabs, and cornice falls. Wind slabs could be 1-3+’ thick and storm slabs will depend on the depth of the new snow. Cornices have grown and deserve an extra wide berth. It’s a day to watch for red flags, be cautious with our route-finding, and be conservative with our decision making.

Although the visibility was somewhat poor, we did have reports of a handful of natural avalanches seen around the region yesterday. On our field day at Tincan, there was a quick shot of sun, giving us confirmation of the high degree of wind effect. Many ridges and sub-ridges were scoured and others loaded. We saw what appeared to be several wind slab avalanches that had been partially covered back in by the winds. These were along ridgelines, but also mid-slope and in cross-loaded gullies. Some of these were likely triggered by pieces of cornice falling off. One of those is pictured below. 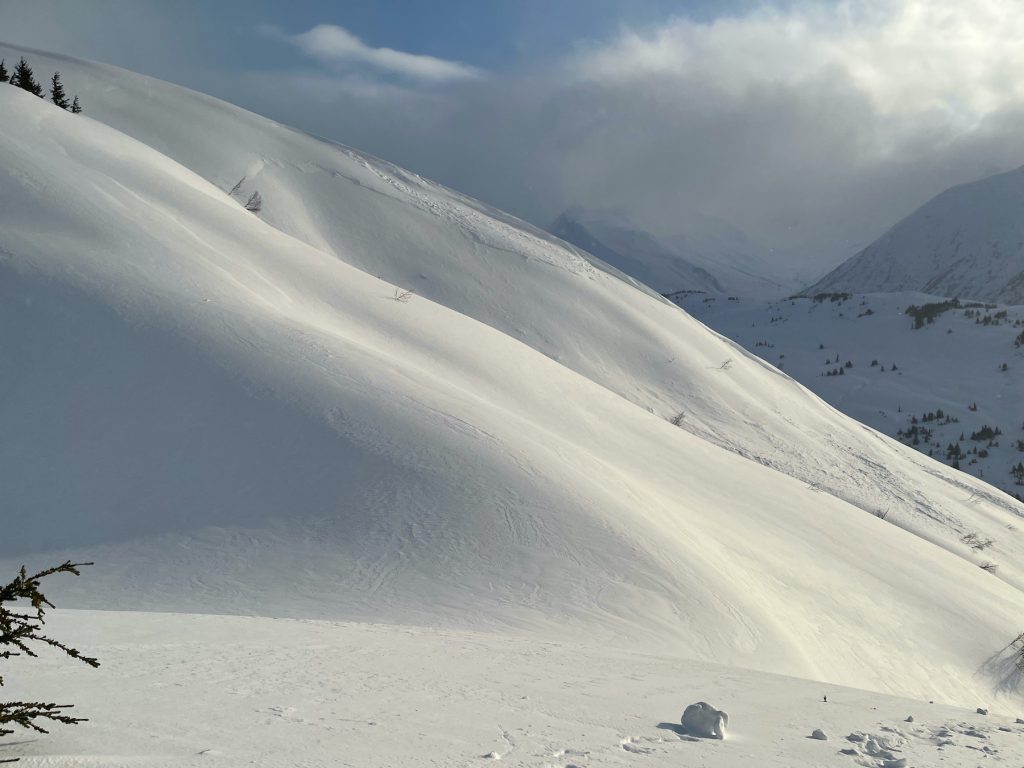 A brief break in stormy weather is slated for today as ridgetop winds are turning westerly, temperatures are cooling, and there is even a chance for some clearing skies. The storm that hit Sunday evening and lasted through yesterday morning has moved off. There was significant variability in storm snow totals, but the winds howled everywhere. Sunburst saw gusts to 96mph at 8am yesterday morning, for example.

Today we are within the 24-48 hour period after the storm ended and that means we need to have a conservative mind-set and be on the lookout for the different ‘storm snow instabilities’ at the mid and upper elevations. These are: wind slabs, storm slabs, and cornice falls. The size of avalanches will be dependent upon how much snow has fallen. Paying attention to red flags is critical. These are recent avalanches, cracking in the snow around you and collapsing in the snowpack (whumpfing). At the lower elevations (below 1,000′) where rain fell, we can expect the wet snow to start freezing, which will limit avalanche issues.

Wind Slabs:  Most of the Alpine has been significantly affected by the strong winds. Wind slabs are likely to be lurking on most slopes. They could be near ridgelines, mid-slope on rollovers and as seen above, in cross-loaded gullies. Slabs could be anywhere from 1-3+’ deep and likely easy to trigger.

Storm Slabs:  Any slope with more than 8-10″ new snow should be suspect of avalanching simply due to the rapid loading of snow just over a day ago. This would be predominantly in the Girdwood Valley and Placer Valley areas with close to 2 feet of new snow near and above treeline.

Cornices:  From our quick peek yesterday, cornices have grown and been re-shaped. These could be teetering on the balance and just need a person to tip that balance. Give them an extra wide berth, they could break further back than expected. 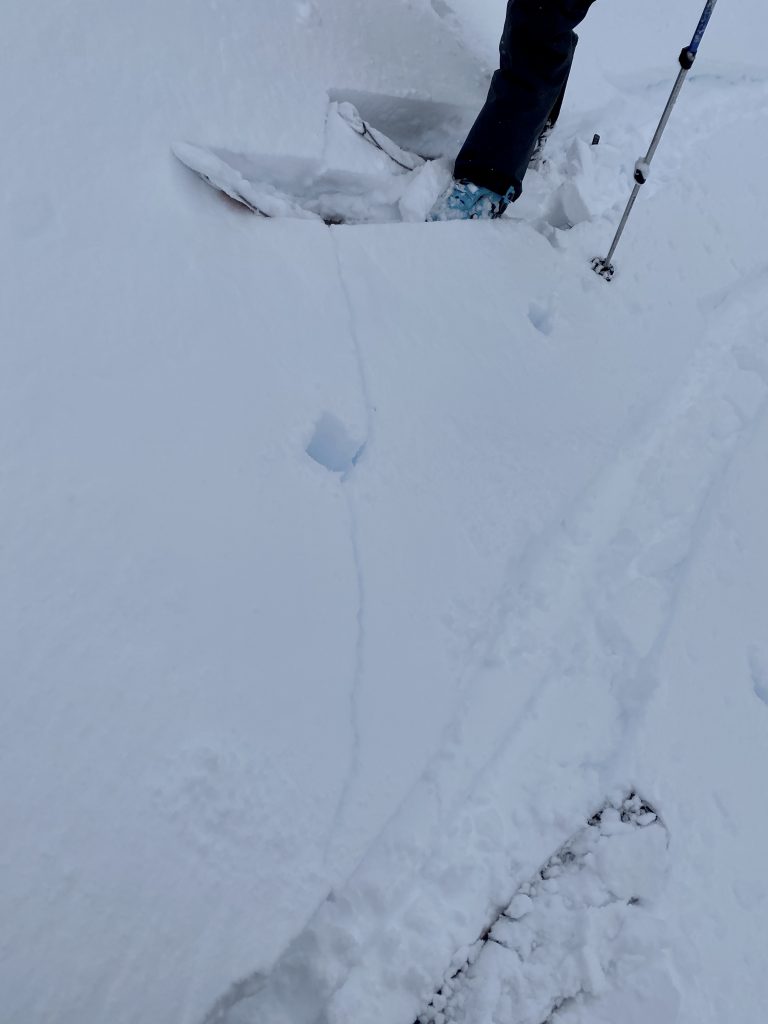 Cracking in the snow between skiers yesterday at the top of the Tincan Trees. This is a shallow wind slab on relatively flat ground. 1.24.22.

Avalanches breaking in old snow deeper in the pack?

We are continuing to watch the buried New Year’s crust and how this latest storm impacted that, or any other layer, deeper in the snowpack. With only a brief look at a small area yesterday, there are still a lot of unknowns as to any avalanche activity that may have stepped down to a buried weak layer. The conservative choice right now is to be suspect of steep upper elevation slopes where a wind slab or cornice fall could step down and create a much larger avalanche. This issue seems to be most pronounced on slopes with a thinner snowpack such as exposed peaks and ridges that see a lot wind, as well as in areas such as the west side of the Girdwood Valley (toward Crow Pass) and south end of Turnagain Pass to Summit Lake.

Yesterday:  Mostly cloudy skies with areas of clearing around Turnagain Pass. Light precipitation fell off and on through the day as the storm exited the region (adding 1-2″ in most areas). The rain snow line was roughly between 600-800′ with wet snow at 1,000′. The easterly ridgetop winds were very strong till 10am (60’s, gusting 90’s mph) when they decreased into the 20’s with gusts in the 40’s mph.

Today:  A break between storms is expected today with a chance for some clearing skies. Ridgetop winds will turn westerly (5-15mph) and usher in colder air (teens F). There could be some instability showers pop up and add another 1-2″ here and there.

Tomorrow:  Beginning Wednesday, another system will start to push in that looks to peak on Thursday. Tomorrow, light snowfall, moderate easterly ridgetop winds and warming temperatures are forecast. Heavier snowfall with a rising rain/snow line is expected Thursday into Friday.