The avalanche danger is HIGH above 1000′ today. Heavy snowfall and strong winds are creating very dangerous avalanche conditions and travel in avalanche terrain is not recommended. Wind slabs 1-4′ deep will be very likely for a person to trigger in areas being actively wind loaded. In protected areas avalanches in the new storm snow up to 2′ deep are likely, especially during the first half of the day before the new snow has time to bond with the old snow surface.

Below 1000′ the avalanche danger is CONSIDERABLE. Precipitation should be a mix of snow and rain in this elevation band today. Storm snow avalanches and wet loose avalanches are likely. The potential for avalanches releasing at upper elevations and running into lower elevations exists, so awareness of overhead hazards while travelling in avalanche paths is important.

An intense period of snowfall and high winds is currently impacting the forecast area, with the biggest pulse of snow accumulation taking place in the early morning hours today. This storm is following a similar pattern to what we have seen over the past several days of warm and wet weather, with significantly higher amounts of precipitation in coastal areas and favoring the Girdwood valley over Turnagain Pass. Snow totals from Sunday afternoon through Monday evening should be over 24″ in Portage and Placer, 12 to 24″ for Girdwood, and closer to 8 to 16″ for Turnagain pass. Snow line is forecast to be between 500 to 1000′ today, rising throughout the day. In addition to the snowfall, winds have been averaging over 50 mph since 1 am on Sunburst with gusts up to 90 mph. Continued strong winds throughout the day today will be transporting snow at mid and upper elevations.

Travel in avalanche terrain is not recommended. Large avalanches releasing in the upper elevations could run into lower elevations, so be aware of overhead hazards if you are travelling in avalanche paths in the treeline or below treeline elevation band today.

Wind slabs 1-4+’ deep will be very likely for a person to trigger and likely for natural release in areas that are seeing active wind loading from the strong SE winds. In protected areas the new load of storm snow could also cause avalanches up to 2′ deep, depending on how well the new snow bonds with the existing snow surface. Since the peak precipitation amounts are happening just before daylight the storm snow will likely be touchy during the first half of the day as it needs some time to bond with the underlying surface. The heavy new load of snow could also reactivate buried weak layers, such as the facets over the New Years crust, which could cause very large avalanches on specific terrain features.

Cornices: The new snow and strong winds will be rapidly building cornices today which could release spontaneously or be reactive to human triggering. 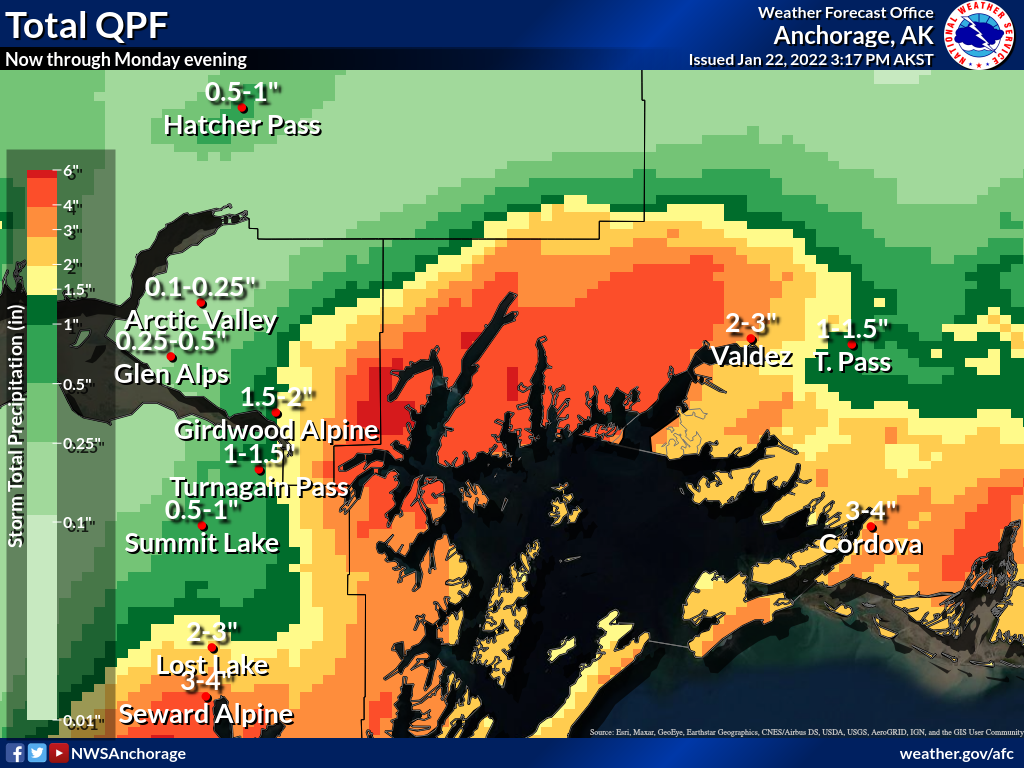 NWS snow water equivalent forecast through Monday evening, with 1 to 1.5″ for Turnagain, 1.5 to 2″ for Girdwood, and 2+” for more coastal areas. Graphic courtesy of NWS Anchorage 1.22.22

Yesterday: Warm and wet weather with active snow and rain starting around noon in Turnagain Pass and increasing in intensity throughout the day. Moderate winds during the daylight hours which bumped up to strong winds with very strong gusts after midnight, especially at upper elevations. Temperatures stayed above freezing at lower elevations with snow rain line around 1000′.

Today: Heavy snow and rain accompanied by strong winds during the early morning hours tapering off towards noon. Snow totals including Sunday afternoon and evening are forecast to be in the 1-2+ foot range, with Turnagain Pass on the lower end and more coastal areas like Portage and Placer on the higher end. Snow line should be around 500′ early Monday morning rising to 1000′ in the afternoon. Winds remain strong out of the SE during the morning with averages in the 25-50 range at and gusts possible up to 100 mph. During the afternoon winds will lighten up slightly and shift to the south.

Tomorrow: After a period of lighter precipitation during the day Monday another pulse of snow and rain is coming overnight with potential for additional 3-9″ of snowfall. Temperatures should drop early Tuesday morning and be below freezing down to sea level. Winds are forecast to be out of the south for this next pulse of moisture in the 10-30 mph range. During the day Tuesday skies look to start clearing and winds become light and variable before the next low pressure system enters the area Wednesday around midnight.