The avalanche danger will start out MODERATE today but will rapidly rise to CONSIDERABLE with the onset of strong winds this afternoon or early evening. Before the strong winds arrive, human triggered avalanches will be possible in areas with lingering wind slabs up to a foot deep. Look for signs of recent snow transport, pillows of snow on leeward aspects, and shooting cracks or collapsing to identify areas with reactive wind slabs. In the afternoon or early evening, once the winds pick up to 10-30 mph with gusts into the 60s, natural avalanches will be possible and human triggered avalanches will be likely up to 3′ deep in areas with active wind loading.

* A storm system approaching today will dramatically change the avalanche conditions. There is a lot of soft snow on the surface available for transport when strong winds start to pick up this afternoon or early evening. The precipitation associated with this storm shouldn’t start to pile up until after daylight hours on Thursday, but up to 0.5″ of SWE overnight will increase the avalanche danger overnight and into tomorrow morning.

The avalanche conditions will be changing rapidly this afternoon as a large storm moves into the area. During the morning and early afternoon, light winds and partially cloudy skies are forecast which should give folks an opportunity to take advantage of the dry and soft surface conditions before the impending storm arrives. The primary avalanche problem for the first part of the day are wind slabs up to a foot deep that built up during the snowfall yesterday when winds were blowing 15-20 mph out of the E with gusts into the 30s. These wind slabs should be relatively soft due to the moderate wind speeds. To identify areas with recent wind slabs look for signs of snow transport on the surface, pillows of snow on leeward sides of ridgelines or gullies, and monitor for shooting cracks or collapsing. We recommend evaluating wind loaded features carefully before entering avalanche terrain.

In areas protected from yesterday’s winds there is a chance that a person could trigger an avalanche in the new storm snow, especially where buried surface hoar exists under the most recent snowfall. We saw surface hoar up to ridgetops on Monday with larger size grains at lower elevations. Now that it is buried, this layer of surface hoar could cause the storm snow to not bond well to the existing snow surface. These avalanches should not be big enough to bury a person but could propagate widely in areas with an intact layer of buried surface hoar.

The first signs that the next storm is arriving will be an increase in winds and cloud cover. Wind speeds are forecast to jump up to 10-30 mph out of the E with gusts into the 60s this afternoon. With plenty of loose surface snow available for transport the increase in winds this afternoon will rapidly build fresh wind slabs and increase the avalanche danger. Natural avalanches will be possible in areas with active wind loading and human triggered avalanches will be likely. Watch for signs of active wind transport along ridgelines to indicate that the avalanche conditions are changing.

Loose Snow Avalanches: Thanks to the unexpected 6-8″ of new snow yesterday in Turnagain Pass, with up to 16″ in Girdwood, there is plenty of soft snow on the surface for sluffs to run in steeper terrain. If you decide to enter steep terrain today be aware that loose snow could knock you off balance. This could be a larger issue for ice climbers, especially if Portage was on the higher side of snowfall totals yesterday. 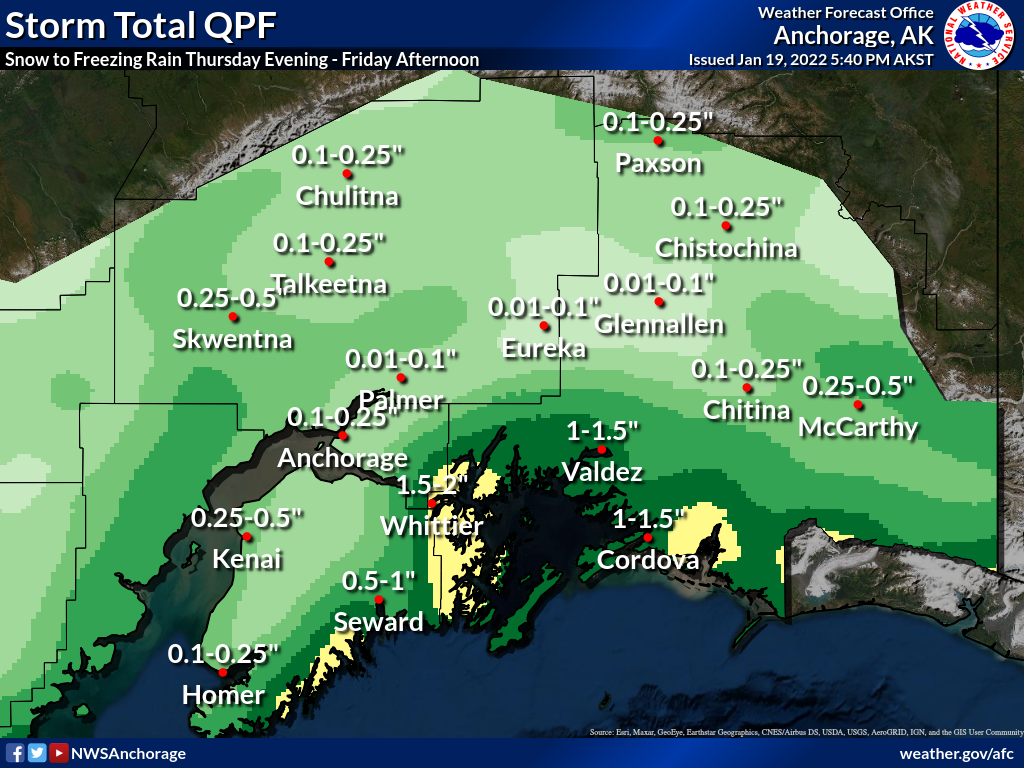 The impending storm system, with 1+” of snow water equivalent (SWE) expected Thursday night and into Friday along with strong winds. Graphic courtesy of NWS Anchorage 1.19.22 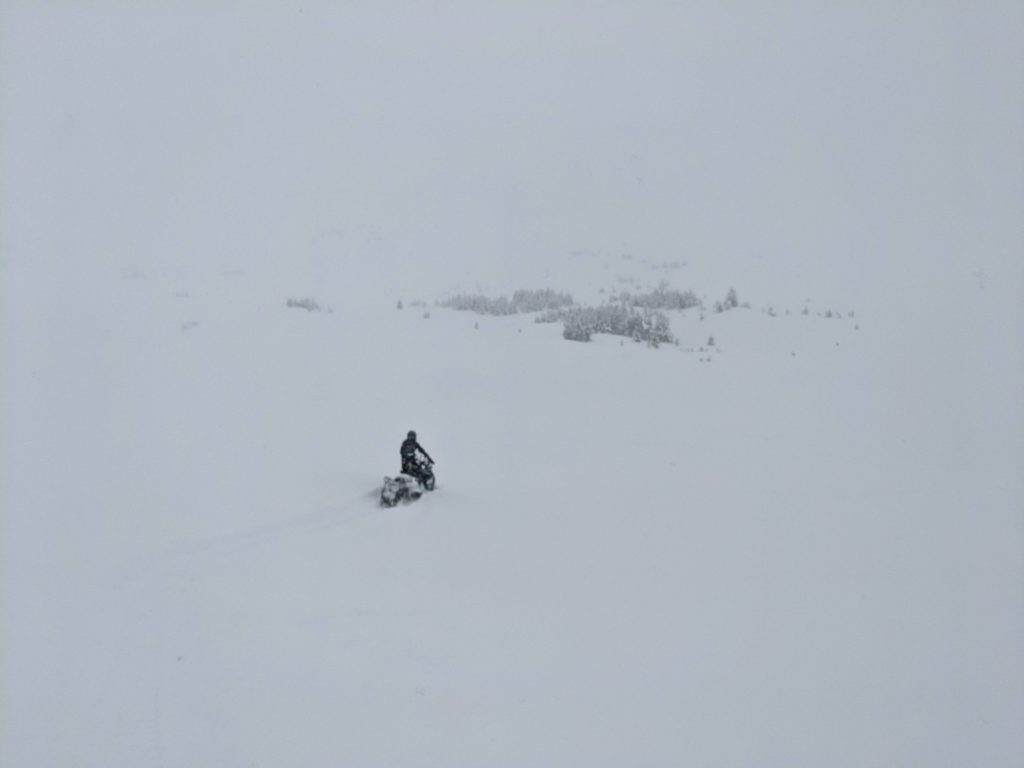 A layer of small facets on top of the New Years crust is still on our minds, despite not seeing much activity since it was buried 10 days ago. The depth to this weak layer is highly variable across the forecast area ranging from 2-5′ depending on snowfall and wind loading during the storms since it was buried. With another large load of precipitation coming into the area this afternoon we will continue to monitor this weak layer for signs of instability. Our biggest concern for this layer are areas with a thinner overall snowpack, like the southern end of Turnagain Pass and Johnson Pass, where a lingering wind slab could be sitting on top of the shallowly buried weak layer.

Yesterday: A sleeper storm moved through the area yesterday. Storm snow totals were in the 6-8″ range at Turnagain Pass with up to 16″ in Girdwood. Based on the SNOTEL data Summit Lake looks like they got a similar amount to Turnagain Pass. Winds were light at lower elevations but in the teens and gusting to 30 mph at ridgetops during the most intense period of precipitation before 12 pm.

Today: The first half of today is the calm before the next series of storms moves in this afternoon and evening. Winds should be light and variable through midday before shifting to the E and picking up to 10-30 mph with gusts into the 60s. Temperatures should stay in teens to twenties for the morning before starting to rise in the afternoon. Increasing cloud cover and precipitation will follow the increase in winds and snowfall should start late this afternoon. The storm should start with snow down to 300′ on Thursday evening.

Tomorrow: Precipitation will continue overnight Thursday and Friday with temperatures increasing throughout the storm and snow level rising to 2100′ Friday. The first pulse of precipitation from Thursday evening to Friday afternoon looks like over an inch of total snow water equivalent. Winds will remain strong out of the east through Friday.