An overall MODERATE avalanche danger exists in the mountains. Fresh wind slabs will be building today as 4-8″ of light new snow is expected coupled with moderate easterly winds. Triggering a newly formed wind slab, up to a foot deep, will be possible on wind loaded slopes, predominantly in the higher elevations. On steep slopes without any wind effect, small shallow sluffs could be triggered in the new snow.

Ice climbers: Small natural sluffs could wash over ice routes in Portage Valley due to light snowfall and gap winds.

Light snow is falling this morning bringing a nice ‘refresher’ to the mountains around Girdwood, Turnagain Pass, and even down toward Summit Lake. As of 6am, roughly 1-3″ has fallen with another 3-5″ expected through today before tapering off tonight. The easterly winds are blowing 10-20mph along the ridgetops with gusts near 30. The winds should remain through most the day and also quiet down tonight.

With this shot of snow and some moderate winds, we can expect wind slab development through the day. It’ll be important to keep a look out for slopes that are seeing active wind loading. Slabs that do form should be fairly soft and on the smaller and shallower side – up to a foot deep or so. They could be more easily triggered where they are sitting on a new batch of surface hoar that grew over the past few days. The winds also may pick up some older loose snow, which could add to the depth of the new wind slabs. Something to keep in mind if finding yourself in a particularly windy zone. As always, watch for signs of recent avalanches and cracking in the snow around you.

All in all, there are likely to be many areas that are sheltered enough from the winds to avoid the wind slab problem. Unless more snow falls than forecast, which would create a storm slab avalanche issue, we can expect small sluffs on steep slopes within the 4-8″ of new low density snow. 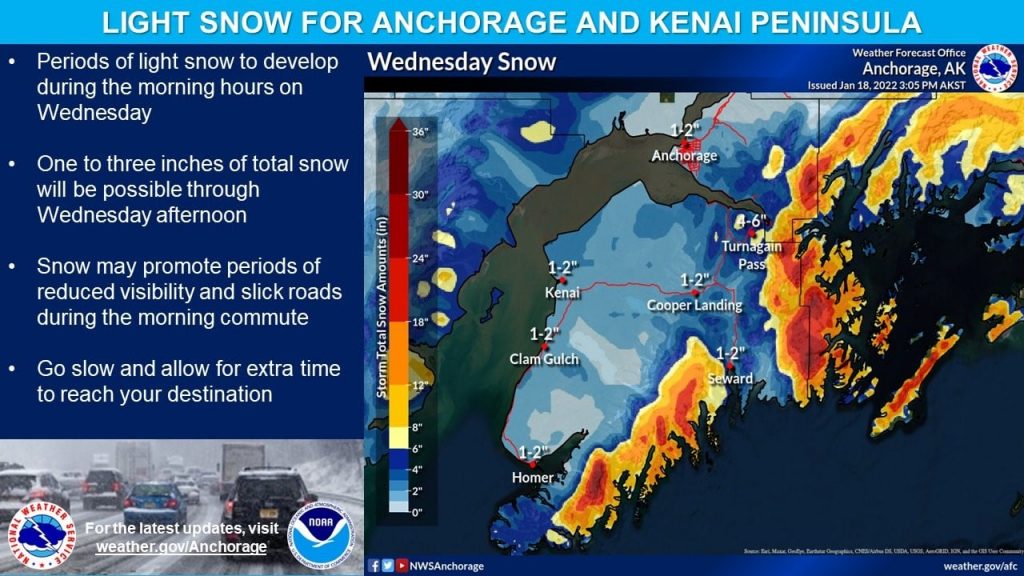 Graphic courtesy of the NWS showing snowfall totals through today. 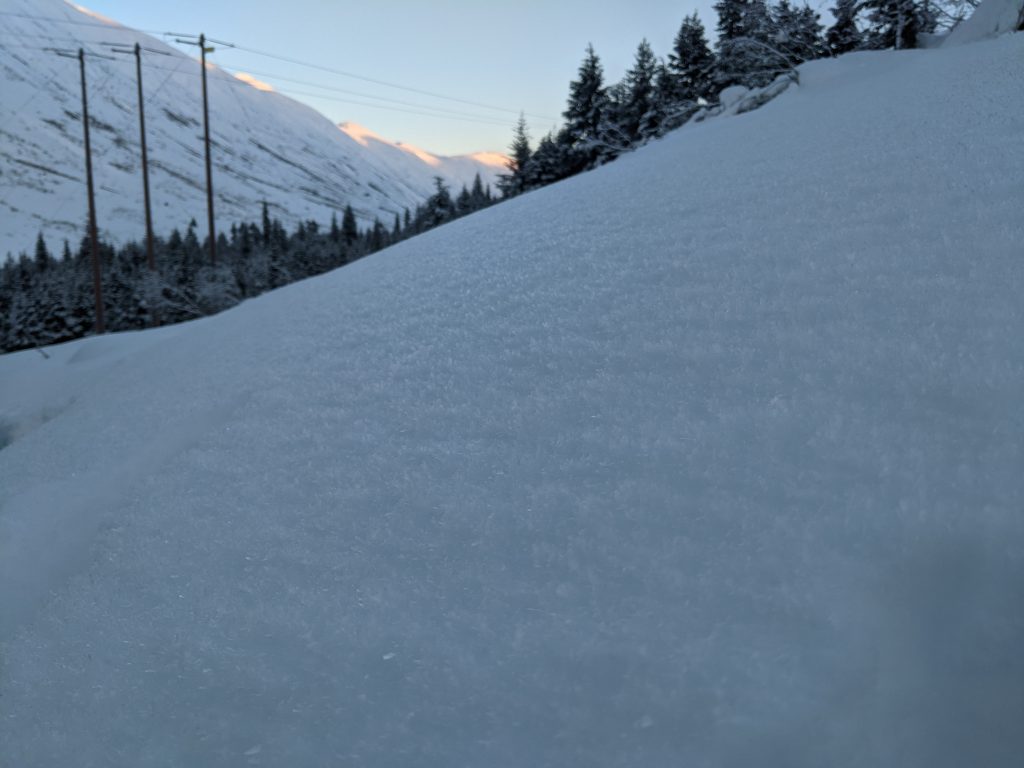 Snow surface with a new crop of surface hoar. This photo is from the mid-elevations on Lipps, but small surface hoar was reported up to ridgetops. 1.17.22.

Thanks to the many folks writing in over the holiday weekend, we have a reasonable amount of information regarding the layers deeper in the snowpack. Evidence continues to show the snow surrounding the buried crusts (New Year’s crust and mid storm crusts from last week) are not reacting or producing avalanches. These crusts are anywhere from 1-5′ deep depending on location. They are degrading in shallower areas and are in general quite variable. Although they are not likely to cause an avalanche, there still could be an outlier lurking. This would most likely be a wind loaded slope (wind loaded during last week’s storm) and in a shallower snowpack zone where the old wind slab sits on weak snow over a crust.

Yesterday:  Overcast skies were over the region yesterday with easterly winds in the 10-15mph along ridgetops. Temperatures were in the teens along ridgelines and in the 20’sF at the lower elevations. Light snow began to fall around midnight with a slight bump in easterly winds.

Today:  A weak front is pushing in from the south this morning bringing snowfall and moderate easterly winds along the ridgelines (10-20mph, gusts near 30). As of 6am, 1-3″ has fallen and we are expecting another 3-5″ through the day (snow to sea level). Temperatures are bumping up to near 30F at sea level and to 20F along the ridgelines.

Tomorrow:  A break in weather is looking promising for Thursday with partly cloudy skies, mild temperatures and light to moderate east winds. A real pattern change (warm, wet windy weather….) heads in late Thursday through the weekend. Stay tuned as more precipitation is headed our way along with a rising rain line.