A CONSIDERABLE avalanche danger exists above 2,500′ where human triggered wind slabs are likely and cornice falls are a concern due to continued winds impacting the higher elevation terrain. A MODERATE danger exists below 2,500′ in exposed areas where winds are loading mid-elevation terrain. Watch for active wind loading and expect slabs to be in the 1-2′ thick range. Additionally, older larger slabs from Monday’s storm may still be possible to trigger on steep slopes, creating a much larger and dangerous avalanche on slopes above 1,500′.

SUMMIT LAKE: Wind slab avalanche are also expected in this area as Monday’s storm added around a foot of new snow. Due to this region having a thinner snowpack and multiple potential buried weak layers, extra caution is warranted for an avalanche breaking deeper in the pack.

After a brief break in weather yesterday, clouds and some light precipitation have moved in this morning. Only a couple inches of snow is expected today (at best and above 500′), but it will be the winds that are keeping the avalanche danger elevated. Ridgetop winds blew out of the east at the Sunburst weather station all night in the 25-30mph range with gusts in the 50’s. These winds are expected to remain through today and are plenty to push around the top foot or so of low density snow from Monday.

If you are headed out today, watch for any active or recent wind loading. This is most likely occurring in the higher terrain along ridgelines, but mid-elevations could be seeing impacts as well. Once again, looking for cracking around you in the top foot or more of snow, and any whumpfing, will be key for sussing out wind slabs. Not only are human triggered wind slabs likely, natural wind slabs and cornice falls are also possible.

Cornices? These are now very large and dangerous. Some cornices are close to 50-60′ wide along ridgelines. Be sure to give them an extra wide berth and know where you are on them. The cornice on top of the Seattle Ridge up-track is one of these monsters to watch out for.

Below 1,500′ the wet snowpack is trending toward a LOW hazard as it freezes. However, any low elevation slope that is still sporting wet snow, wet loose avalanches are possible.

In areas out of the wind, remember there is a stiff slab around 2′ thick sitting on a weaker storm snow interface. This interface, which was the low density snow from 1/15 and buried on 1/16, was the likely culprit in many of the natural avalanches that occurred on Monday. It would be too presumptuous to say this interface of weaker snow has completely bonded, and hence it could still be possible for a person to trigger a large slab that breaks 2′ or more below the surface.

Speaking of this interface, yesterday’s clear skies gave us a good sense of the widespread natural avalanche cycle that occurred during Monday’s storm. Many crowns 2-3′ thick (plus or minus) were visible along slopes and just under ridgelines. Additionally, significant cornice failures were also seen. Some highlight photos are below, but you can see many more on our observation page. 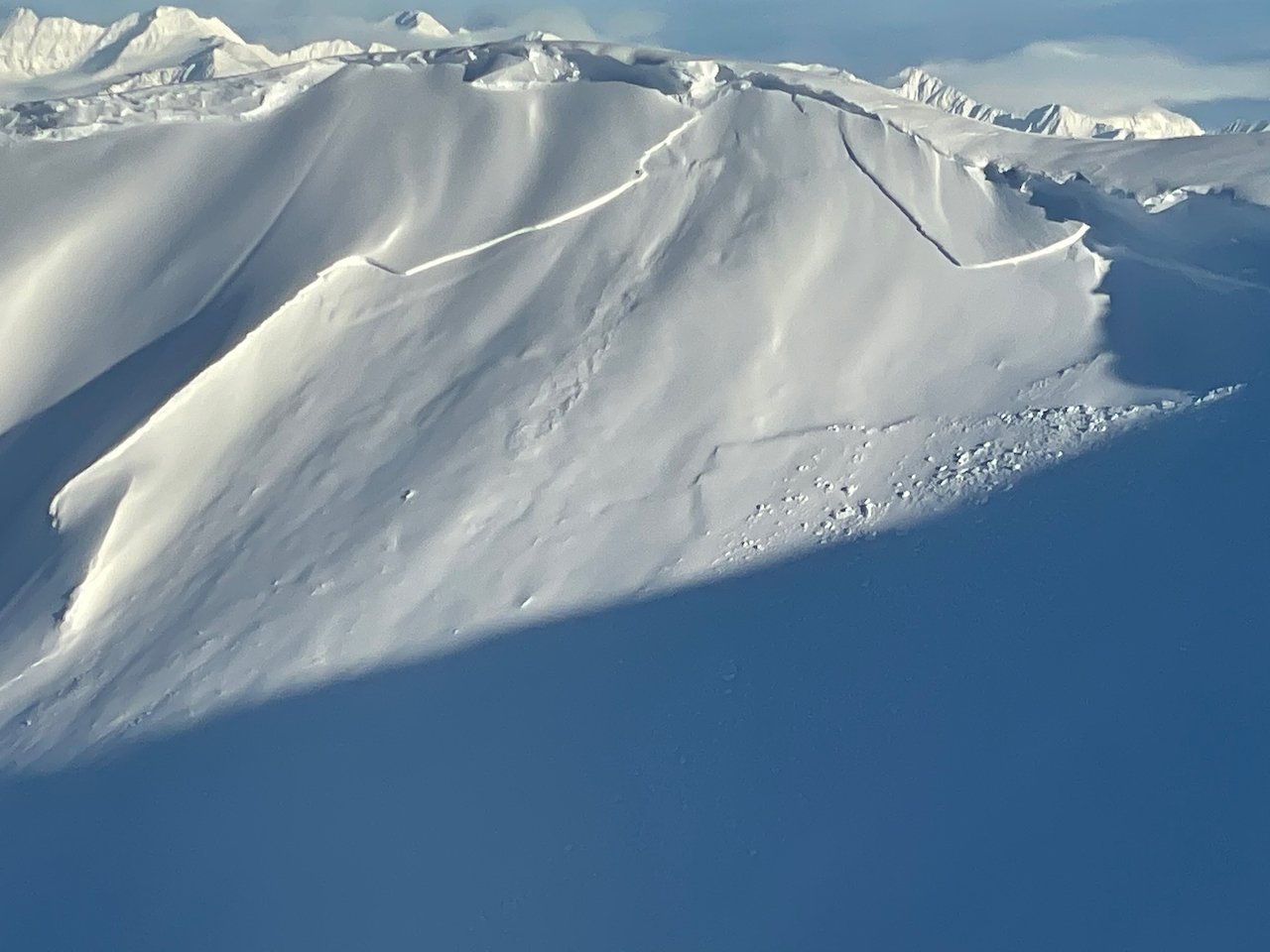 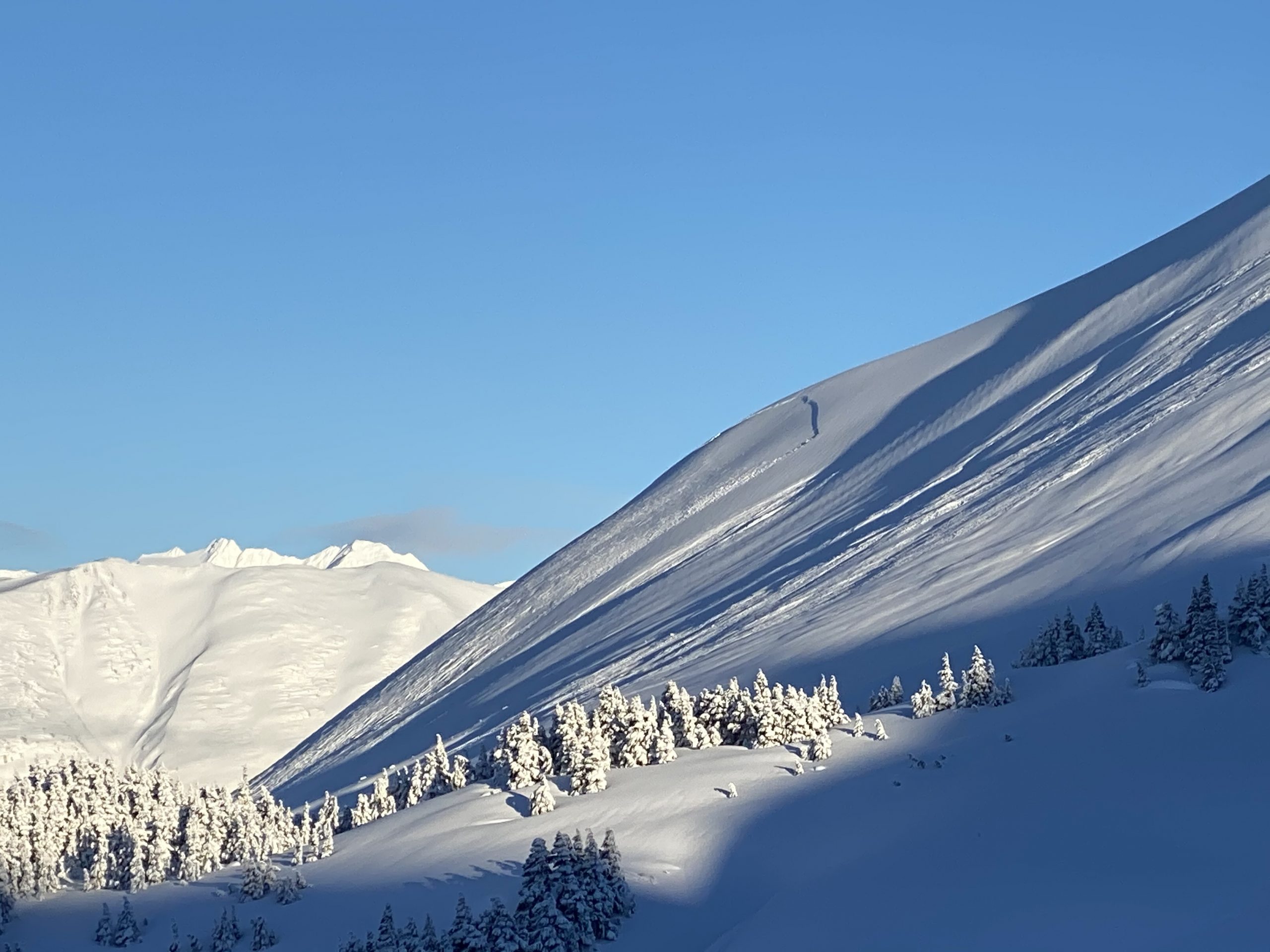 Natural avalanche from 1.18.21 on the West face of Pyramid, also on the backside of Seattle Ridge. Photo taken 1.19.21 by Nick Olzenak. 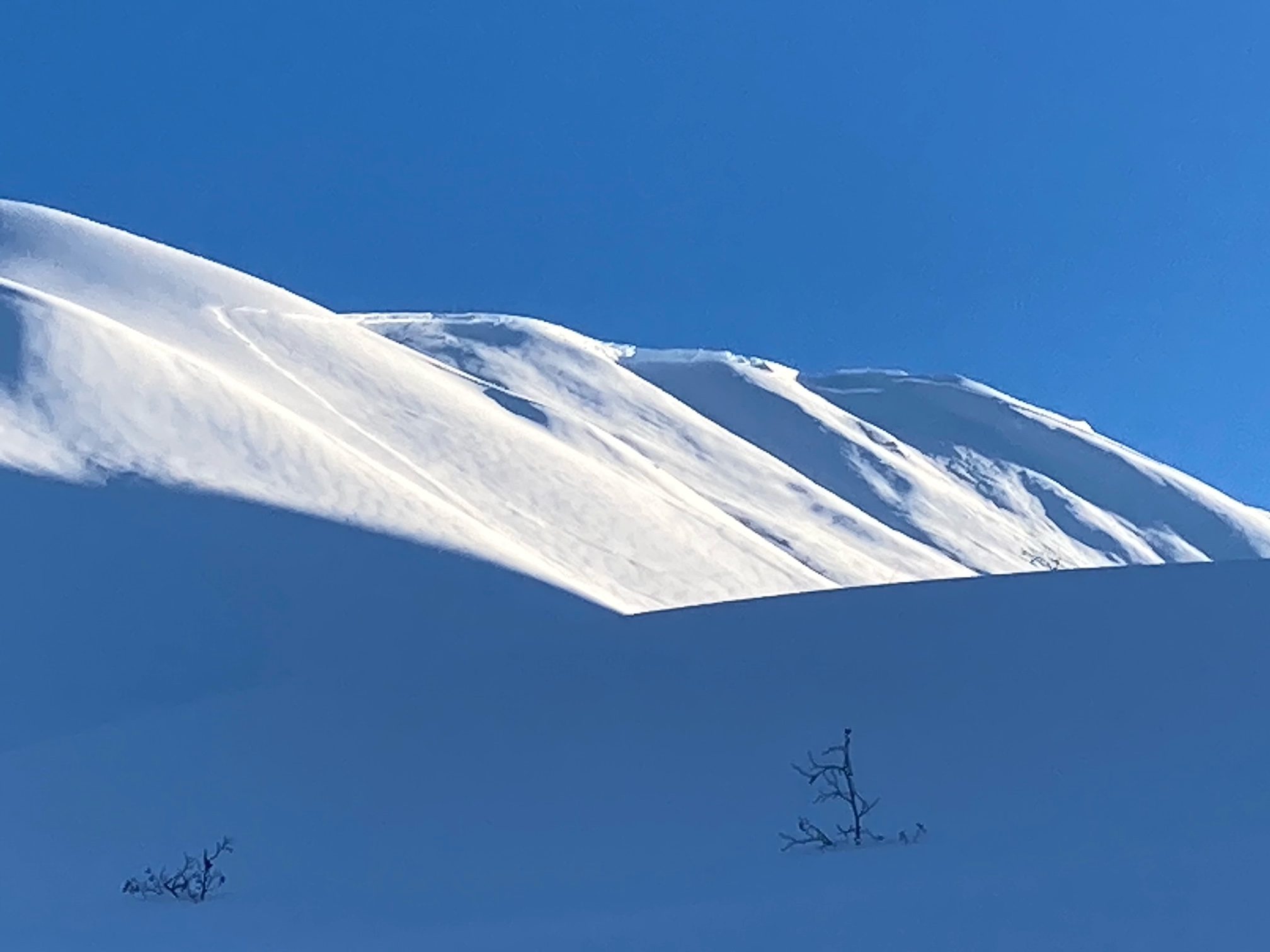 Sunburst SW face. Large natural avalanche from 1.18.21 that propagated across what appears to be the majority of the ridgeline. Photo from 1.19.21 by Thomas Bailly. 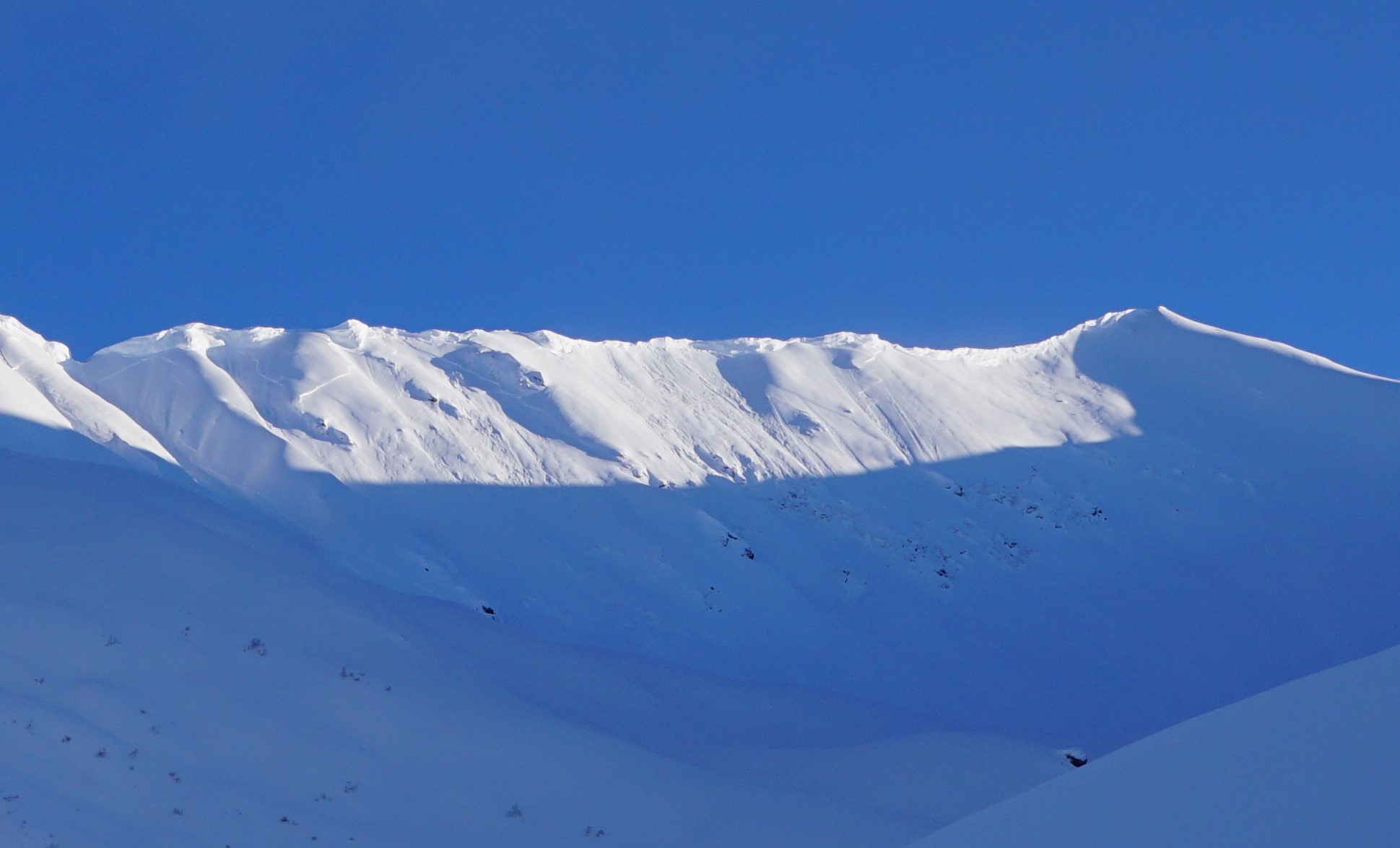 *Big thanks to the many folks for passing along their photos yesterday!

Yesterday: Mostly blue skies with some valley fog was over the region. Ridgetop winds were light from the west in the morning then switched back to easterly and have been increasing since the evening averaging near 30mph since midnight. Temperatures cooled a bit yesterday to 20F along the high ridgelines and 30F at the lower elevations.

Today: Cloudy skis with some light snow showers are expected above 500′ with light rain falling below. Ridgetop winds look to remain elevated, averaging 25-35mph from the east. Temperatures should climb slightly, to the mid 30’s at 1,000′ and mid 20’sF along the ridgelines.

Tomorrow: Another mostly cloudy day with a few snow showers adding an inch or two is expected for tomorrow. The rain/snow line again look to hover near 500′. Ridgetop winds are also expected to remain elevated through tomorrow from the east, blowing in the 25-35mph range.