A generally LOW avalanche danger exists in Turnagain Pass at all elevations. Pockets of MODERATE danger exist in the Alpine in zones that saw more snow last week, such as Girdwood, Portage and Placer Valley. In these areas, triggering a slab avalanche up to a foot thick is trending to unlikely, but may still be possible on steep slopes. In all areas, watch for small slabs in steep rocky terrain, sluffs in steep terrain and cornice falls. Glide cracks are still slowly moving and limit exposure under these.

SUMMIT LAKE / JOHNSON PASS:   A poor snowpack structure exists in this area, which is very different than Turnagain Pass. Triggering a slab avalanche is trending toward unlikely, yet may not be out of the question.

Remember LOW danger doesn’t mean NO danger! In the periphery of the forecast zone, there are areas that saw up to a foot of snow last week; the majority of the mountains only saw 2-6″ of snow. This snow fell on weak near surface facets and buried surface hoar. There has been one known human triggered avalanche that failed in the facets below the new snow, which was last Thursday in the Placer Valley. As folks head out to enjoy the good weather above the fog and into the further reaches of the mountains, finding another slab that is reactive isn’t out of the question. These would most likely be around a foot thick, pockety and on the smaller side. Wind loaded steep slopes are the most suspect. Otherwise, the calm and cold weather pattern has moved us into the “normal caution” phase of avalanche concerns. These include:

*We can’t be lured into forgetting to look for signs of instability and using good travel techniques. Good habits keep us coming home at the end of the day.

South of Turnagain – Johnson Pass/Summit Lake zone: A very poor snowpack structure exists in these areas.  Multiple mid-pack weak layers of facets and buried surface hoar have been found as well as a facet/crust combination in the bottom of the snowpack. No recent avalanche activity and calm weather has allowed the pack to slowly adjust. However, little is know of the high elevation at this point and it will be important to evaluate the terrain and snowpack as you travel. 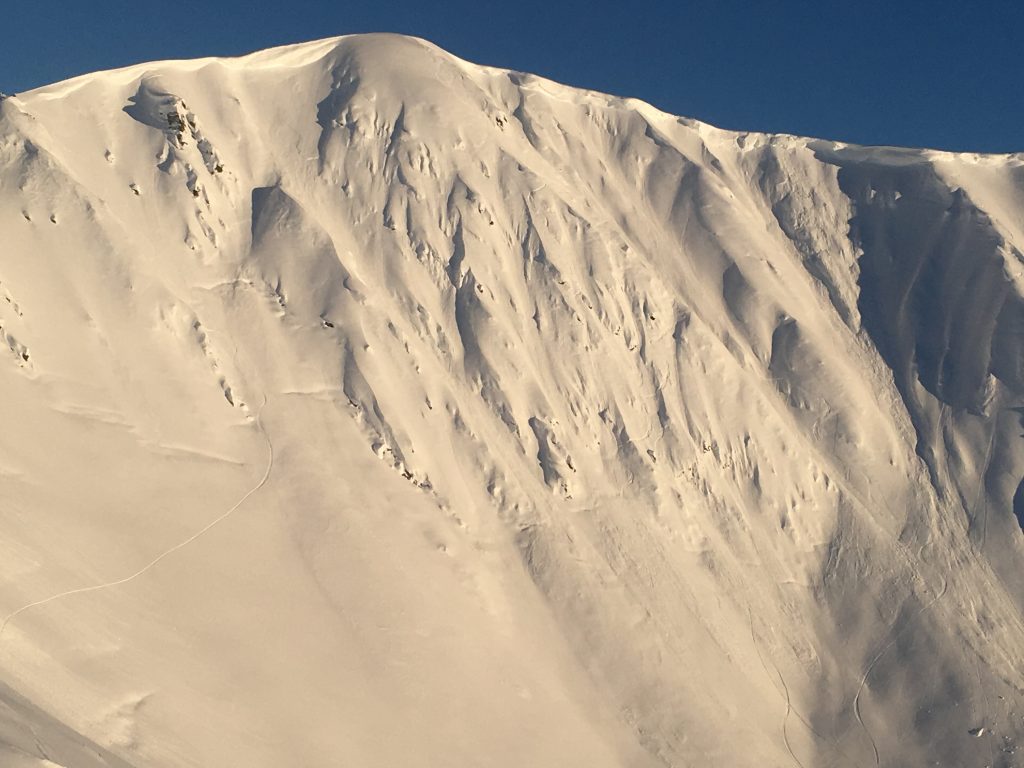 Sluffs and even small slabs are still possible in steep committing terrain. This is the ‘normal caution’ regime. 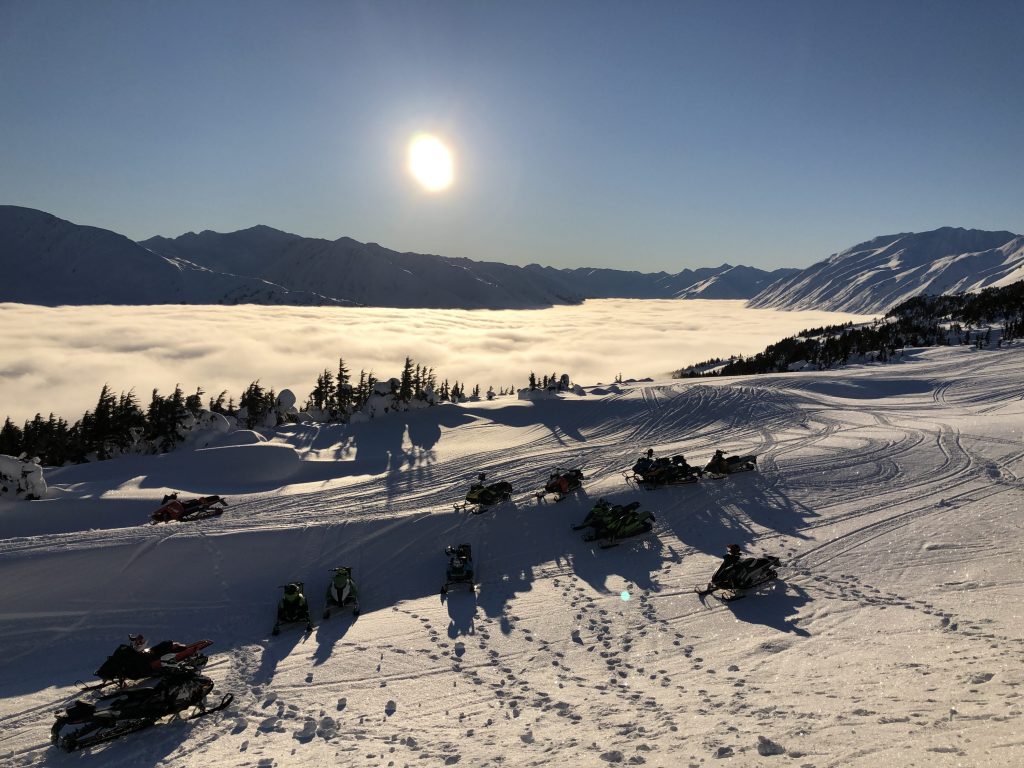 Thank you to Brent Byrne for capturing the blue skies above the dense valley fog on Seattle Ridge. Also seen here is the crusty surface conditions with a new batch of surface hoar on top. A bad set up for the future and a new load of snow.

Glide cracks are still slowly opening. Although we have not heard/seen one of these release for over a week, limiting exposure under them remains wise. Known areas with cracks are Eddies, Tincan, Sunburst, Magnum, Cornbiscuit, Lipps, Seattle Ridge, Johnson Pass, Lynx Creek, Summit Lake, Petersen Creek, and Girdwood. This avalanche hazard is unpredictable and cracks can release without warning. 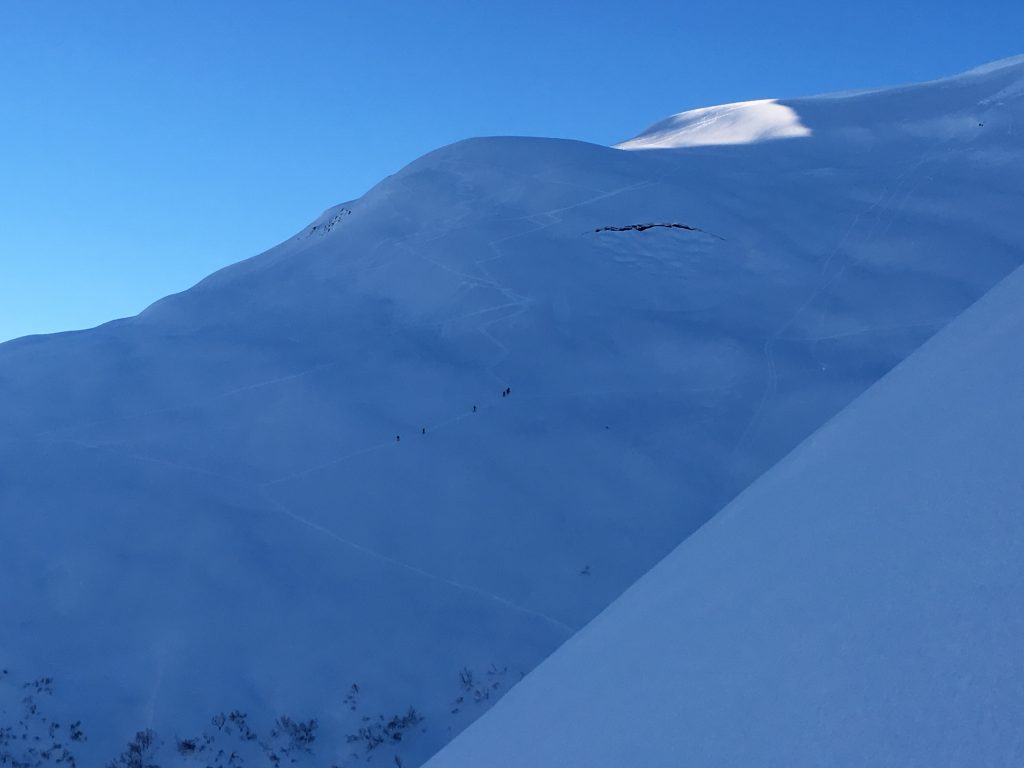 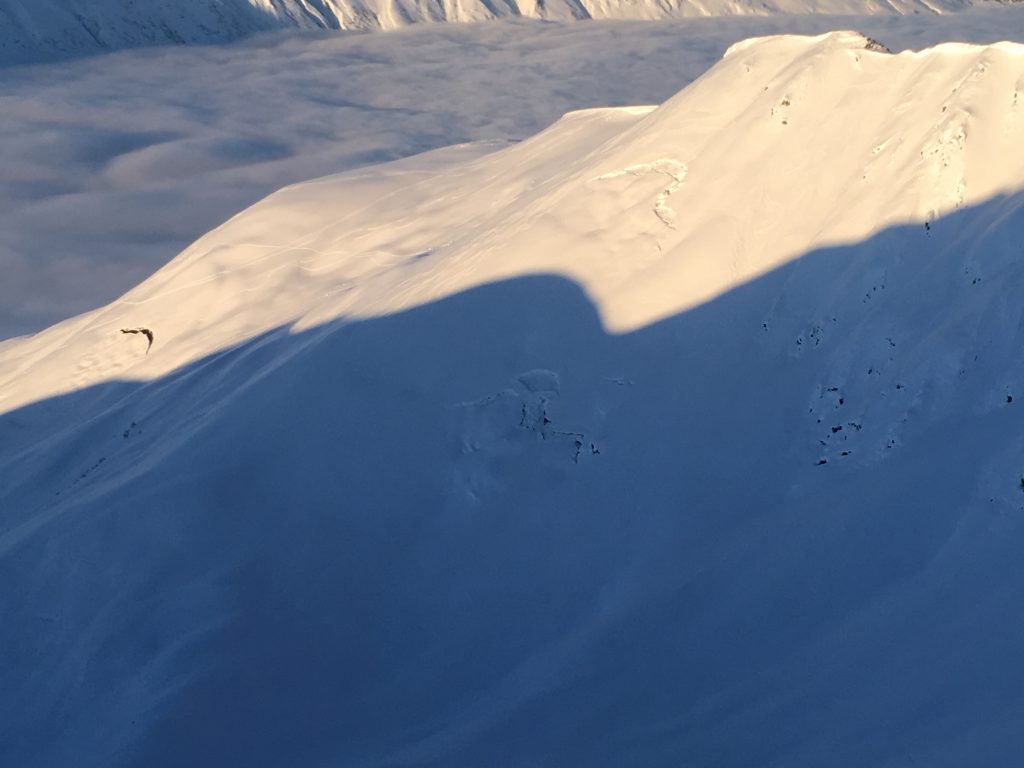 Glide cracks on the SW face of Magnum. The photo on the left with the skin track has the crack that seems to be the most active along this ridge.

Yesterday:   Clear skies sat above dense valley fog up to 2,000′. Winds have been light from the west along ridgetops (5-10mph). Temperatures have been continuing to cool yesterday and overnight, valley bottoms have dropped to the single digits and ridgelines are in the low teens.

Today:   What looks to be one last clear sky day is on tap. Thick valley fog is expected to remain up to 1,500′ or 2,000′.  Ridgetop winds will remain light (5-10mph) but switch to a more easterly direction.  Temperatures should remain in the single digits in valley bottoms and in the teens F at the upper elevations.

Tomorrow:    Clouds, warming temperatures and a chance for snow showers move in on Monday. The rain/snow line looks to stay near sea level through tomorrow and only a trace to a few inches of snow is expected. Another larger system pushes in Wednesday, bringing warmer weather and more precipitation, stay tuned!